Tumor metastasis is a key feature of malignant solid tumors leading to local and distant cancer spread and eventually to death of the patient. Although many theories have been brought forward ever since the malignant nature of tumors was discovered, from the theory of contiguous spread through lymph nodes (1) to systemic spread from very early on (2), the precise molecular mechanisms and their actual contribution are still obscure in many aspects. Hence, it is not possible for a diagnostic pathologist to predict precisely the metastatic potential from a primary tumor biopsy. Instead surrogate markers are being clinically used, such as size of the primary tumor, grading or depth of anatomical invasion. While tumor ulceration, which promotes wound healing and platelet aggregation in the tumor micromilieu, has also been linked to poor prognosis, these factors are not routinely being included in predicting the risk of metastasis in many solid cancers (3). Therefore, a better understanding of the molecular mechanisms and the contributing cellular players is urgently warranted. The precise function of cellular mechanisms as active drivers versus passive victims needs thorough clarification in order to design and deliver targeted therapies for suppression of the metastatic tumor phenotype.

With regard to clinical phenotypes it has been recognized that not all patterns of systemic spread are the same. While some tumors can grow to tremendous size as primary tumors and remain in a non-metastasized state (e.g., as known for many colonic carcinomas arising in Lynch patients), others spread very aggressively from very early on. However, more recently an oligometastasized tumor phenotype is being defined clinically and, hence treatment of metastatic lesions in these patients seems to be of clinical benefit.

With regard to cellular players in tumor metastasis platelets have been identified as active contributors acting through manifold mechanisms [reviewed in (4,5)]. Metastasis-promoting mechanisms affected by platelets relate to both tumor cell extravasation and intravasation during colonization of distant organs, tethering and arrest in distant vessels, protection and evasion from immune recognition, providing a fertile microenvironment for colonization in a foreign organ milieu. Also, direct effects on promoting tumor growth and angiogenesis by release of growth factors support systemic growth of solid cancers (summarized and referenced in Table 1). Clinical observations are in agreement of a tumor-promoting effect of platelets as reduction of platelets has been shown to reduce metastasis and vice versa thrombocytosis and paraneoplastic clotting is frequently observed in tumor patients. 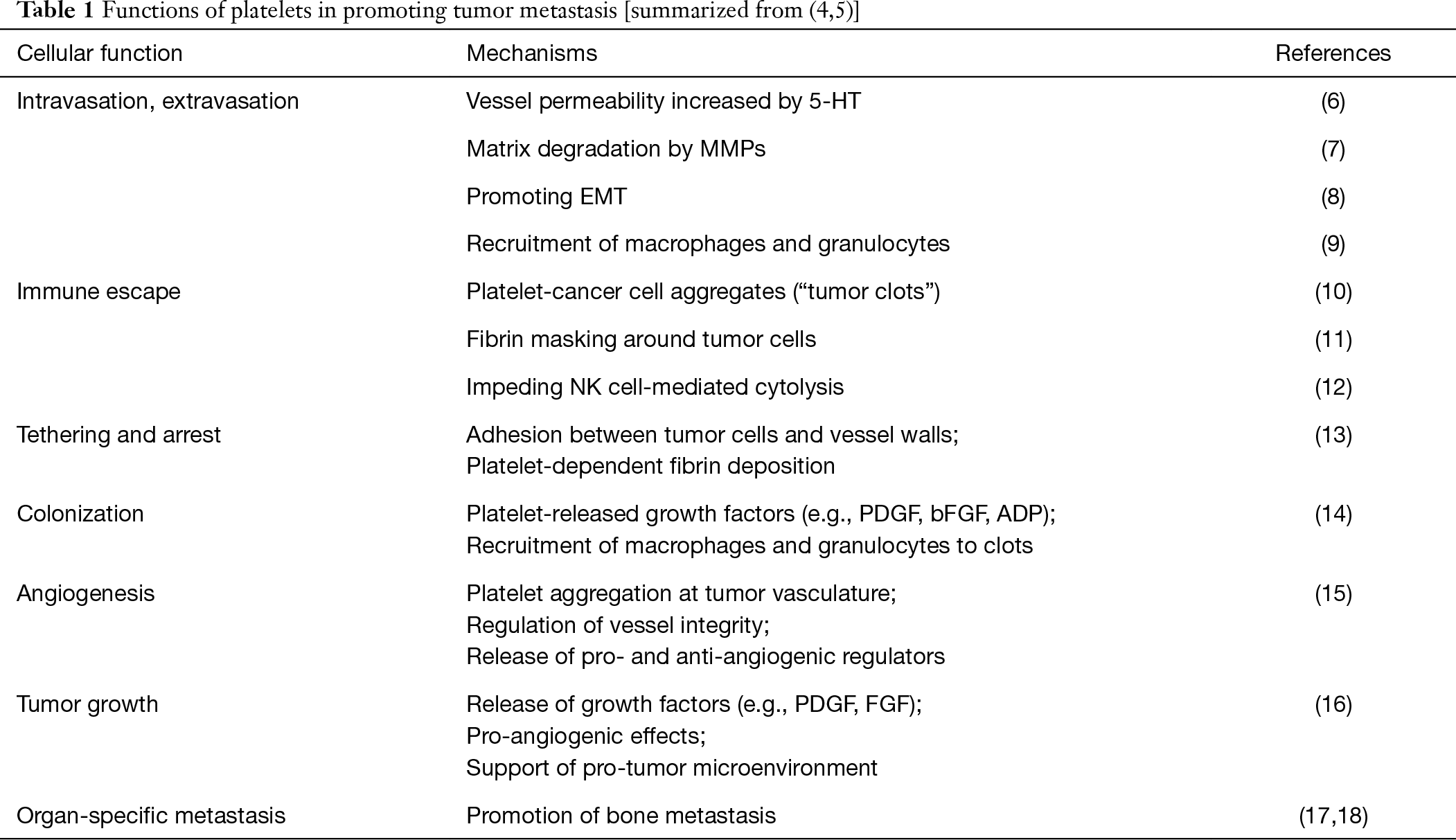 In this context, a new landmark study from Japan by Kamiyama and colleagues (19) provides new mechanistic insight into how stress-responsive signaling cascades contribute to the metastasis-promoting function of platelets. Their study may further pave the way to develop targeted therapies suppressing tumor metastasis.

Using the B16F10 and Lewis lung carcinoma cells as a model system for metastasis, Kamiyama and colleagues show that genetic abrogation of the apoptosis signal-regulating kinase 1 (Ask1) results in drastic attenuation of lung metastasis. In parallel, platelet hemostasis but not platelet generation and number in the peripheral blood were disturbed. Normal platelet numbers but enhanced bleeding time and enhanced occlusion time in FeCl3-induced thrombosis was observed. They further show that platelet-specific deletion of ASK1 in mice leads to defects in ADP-dependent platelet aggregation, unstable hemostasis and subsequent attenuation of tumor metastasis. Mechanistically, ASK1 triggers a MAPkinase (JNK/p38) signaling axis to phosphorylate an ADP receptor P2Y12 at threonine T345, which is required for ADP-dependent sustained Akt activity. The authors further show that sustained activation of Akt through the ASK1-JNK/p38 signaling axis is promoting tumor metastasis by platelets (Figure 1). Thus, activation of the apoptosis-suppressor function of Akt is not only required in tumor cells under stress by oncogenic driver mutations but also in platelets. This data emphasizes another important role of Akt signaling in promoting spread of malignant tumors provided by the microenvironment. The data is even more intriguing and highlights the role of tumor promoting factors from the micromilieu as ADP has been identified as one of the most pivotal factors released from cancer cells and platelets into the tumor stroma (20). 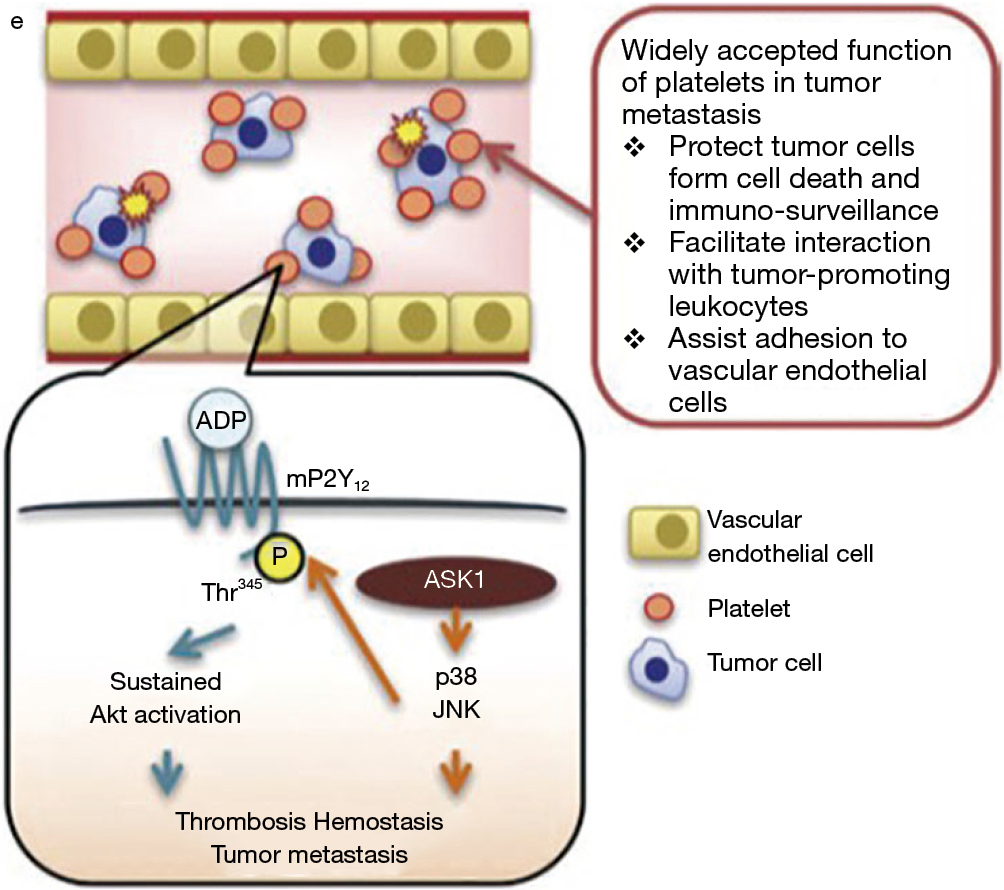 While the study represents a major step forward in understanding the molecular functions activating platelets as metastasis-driver, a number of questions remain to be clarified before translation into clinical practice seems feasible. As the data were mainly obtained from a highly artificial mouse model for lung metastasis, it remains to be seen whether the same molecular signaling axis is active in human tumors. With regard to the specificity for lung metastasis other human tumors with liver, bone or brain metastasis need to be explored in order to see, whether the data from Kamiyama et al. apply to a wider spectrum of organ metastases in solid tumors. Further then the specificity of P2Y12 in activating the Akt pathway warrants further studies as two different purinergic receptors are activated through ADP during platelet aggregation (P2Y1 and P2Y12). Potentially there is a window of opportunity to select specifically the effects of platelets on tumor metastasis and blood clotting. Vice versa, it will be important to see whether there is a large enough therapeutic window to treat human patients for tumor metastasis without causing severe bleeding disorders. In any case however, Kamiyama and colleagues for sure have opened a new scenario for testing these hypotheses and clarifying the remaining questions. Targeting specifically the metastatic phenotype of malignant tumors remains a worthy goal to go for it.