Temperature and duration targets during post-arrest care: choosing the right prescription for the right patient

Targeted temperature management (TTM) was established as a key post-arrest therapy after the publication of two randomized trials in 2002 (1,2). Both trials showed improvement in favorable neurologic outcomes characterized by Cerebral Performance Categories (CPC) score of 1–2 and a lower 6-month mortality with the use of TTM after out-of-hospital cardiac arrest (OHCA) from ventricular fibrillation or ventricular tachycardia (VF/VT). Subsequent pre-clinical and clinical studies have confirmed the protective effects of TTM (previously known as therapeutic hypothermia). Along with a growing body of supportive literature, the indications for using TTM in post-cardiac arrest care have also expanded. In 2015, the International Liaison Committee on Resuscitation guidelines recommended that TTM should be used for all comatose patients who achieve return of spontaneous circulation (ROSC) after cardiac arrest (3).

Cardiac arrest is an extreme shock state that results in an absence of blood flow to the brain and vital organs. The arrested, no flow state can be partially temporized to a low flow state by way of cardiopulmonary resuscitation (CPR). During this time, there is inadequate oxygen delivery, extraction, and debt. ROSC results in a cascade of events including endothelial activation, whole body ischemia/reperfusion injury, altered cerebral macro & microvascular perfusion, microvascular thrombosis, and end-organ dysfunction. TTM is one of the only interventions found to significantly impact clinical outcomes after cardiac arrest.

The application of TTM is generally divided into three distinct phases: induction, maintenance, and rewarming. However, the optimal prescription of TTM (i.e., depth, duration, rate, etc.) has yet to be found (Figure 1). Given that reperfusion injury mechanisms are complex processes that may last for several days following resuscitation, it has been suggested that duration of TTM, in addition to depth of temperature reduction, may serve as a key component of TTM “prescription,” contributing to clinical outcomes. TTM treatment endpoints, along with patient outcomes, often compete against a number of other patient factors and interventions that may impact the overall treatment effect (Figure 2). 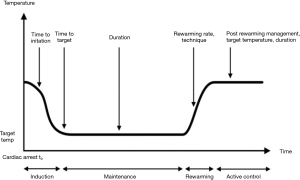 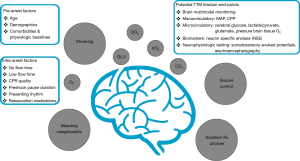 The currently accepted duration of TTM, 24 hours of “maintenance” at a specified target temperature, is derived from the protocols of two positive landmark 2002 trials, which prescribed different durations of therapy. Unfortunately, there is minimal evidence supporting a specific duration and as a result, clinical practice has varied, with duration of TTM therapy ranging from 12–48 hours (4). In July of 2017, Kirkegaard and colleagues attempted to clarify the question about duration of TTM with their trial published in the Journal of the American Medical Association (JAMA) (5).

In this well-done pragmatic, multi-center, international, randomized control trial, 351 comatose subjects who achieved ROSC after OHCA were enrolled into two groups using a 1:1 ratio (24 vs. 48 hours of TTM at 33 °C). Randomization was conducted during the initial 24 hours of temperature management. The trial was designed to identify a 15% absolute difference (65% vs. 50%) in favorable neurological outcomes (categorized by CPC score of 1 or 2) at 6 months after cardiac arrest. Secondary outcomes included 6-month mortality, adverse events and resource utilization. Comatose patients between 18–80 years of age, with OHCA caused by both shockable and non-shockable rhythms were eligible. Patients with unwitnessed asystole were excluded. Both surface and intravascular cooling methods were allowed and neurologic prognostication was deferred until at least 72 hours. The authors of the trial utilized a general standard for interventions where the primary clinician researchers cannot be blinded (6), by ensuring 72-hour prognostic clinicians and 6-month outcomes assessment personnel were blinded to the duration of TTM received by each subject, and were not a part of the subject’s treatment team.

Experimental and control subjects were relatively well matched. The mean age of patients were approximately 60 years old, predominantly male (83%), and with similar cardiovascular risk profiles. A large percentage (88%) of patients had VF/VT as the underlying arrest rhythm, and the subject’s location off arrest, prehospital care, and rates of post-ROSC angiography were also well matched. The authors found no statistically significant difference in the primary outcome of patients with CPC 1–2 at 6 months (69% vs. 64%; P=0.33) after receiving either 48 or 24 hours of TTM. Similarly, no significant differences were found in 6-month mortality between treatment groups (27% vs. 34%; P=0.19). The median ICU length of stay was longer in the 48-hour group (151 vs. 117 hours; P<0.01) and more patients in the 48-hour group experienced adverse events (97% vs. 91%; P=0.03), with hypotension being the most common adverse event (62% vs. 49%; P=0.013). No significant differences in bleeding or pneumonia were noticed in the two groups.

The trial authors should be commended for completing this well designed, pragmatic randomized control trial. Unfortunately, as with many trials attempting to show a clinically significant outcomes benefit, this trial was likely undersized to find a true difference between groups. In the original HACA and Bernard trial, a 15–25% outcomes difference was found when comparing therapeutic hypothermia compared to normothermia. In order to show a clinically significant difference between 24 and 48 hours of TTM, a much larger sample size would likely need to be enrolled. With the emergence of large, well-composed clinical trials groups such as the Australian and New Zealand Intensive Care Society (ANZICS), a trial like this may be possible (7,8). Despite the trial’s neutral results, a number of questions should be considered prior to implementing their findings into clinical recommendations and practice.

First, is 48 hours of TTM more effective than 24 hours? The results of this trial would suggest there is no significant difference in neurologic outcome, but a trend toward benefit can be observed in their secondary outcome of 6-month mortality in the 48-hour group. Mechanistic data suggest there is an important reason to consider longer duration of TTM, and the given the trial by Kirkegaard et al. may be have underpowered, this question remains unanswered. Laboratory and clinical data suggest that the incidence of neuronal injury and activation of cell-death signaling pathways can occur hours to days after ROSC, and are influenced not only by the type of brain tissue exposed to ischemia/reperfusion, but other patient factors such as age, baseline physiology, and comorbidities (9,10). In general, fixed dose treatment trials may not be the best design for therapeutic interventions in critically ill patients, given the heterogeneity of both patient factors and injury severity. As with most therapeutic treatments that occur in the intensive care unit, it is important that clinical trials using therapeutic interventions involve titration to a specific effect or end-point.

Consider hemodynamic management of a patient with circulatory shock, where 65 mmHg represents a typical threshold mean arterial blood pressure (MAP) target in treatment guidelines. Achieving this MAP will likely achieve end-organ perfusion for most critically ill patients. But a fixed pressure does not guarantee adequate capillary blood flow. Prescription of a higher MAP was recently tested in patients with septic shock, but did not find a significant difference in clinical outcomes (11). Similar to this work, along with other fixed dose treatment trials, it is possible that the work of Kirkegaard et al. was limited in its discriminatory power because the intervention did not target any specific physiologic endpoint (12,13). An important next step in trial design might be to consider titration of TTM therapy to appropriate physiologic endpoints that might lead to a better understanding of TTM prescription.

If the purpose of TTM is to improve post-arrest cerebral microcirculatory perfusion, reduce neuronal injury, and improve neurologic outcome, monitoring end organ response to the prescribed intervention must occur. Early neurocritical care research exploring the impact of TTM on brain tissue oxygenation and metabolism has found that the use of multimodal monitoring to measure cerebral lactate production, glucose metabolism, and local inflammatory biomarkers may be a promising step in understanding how TTM impacts the injured brain following resuscitation from cardiac arrest (14,15). Further investigation may eventually help guide clinical decisions about specific elements of TTM prescription, including duration of therapy.

The work of Kirkegaard et al. also raises important questions regarding safety endpoints at each TTM duration. Patients treated with prolonged TTM therapy were found to have a significantly higher rate of hypotension (MAP <60 mmHg) in the 48-hour group, but no difference in rates of arrhythmias, bleeding, or infection. In fact, 108 patients in the 48-hour group experienced at least 1 hypotensive episode compared to 86 in the 24-hour group. The cause for hypotension is unclear, but it is unlikely a direct result of TTM itself. More common causes for hypotension during TTM include hypovolemia as the result of excessive cold diuresis, vasoplegia secondary to the post-reperfusion systemic inflammatory response, or myocardial dysfunction. A higher incidence of hypotension resulting in a reduction in cerebral perfusion pressure in the 48-hour group may have impacted the primary outcome findings.

This trial also demonstrates that strict temperature control is clinically challenging in the post-arrest patient. A large percentage of subjects in both groups experienced a temperature >37 °C at some point during their active or post-TTM treatment course. Post-TTM fever is believed to be associated with poor outcome, but it is unclear what temperature threshold an effect on outcomes becomes detectable (16). There does appear to be a significant relationship between post-TTM pyrexia and more severe brain injury, and the risk of a poor neurologic outcome increases significantly for each degree of body temperature greater than 37 °C (17,18).

In addition, a number of other potential variables not reported by the trial but known to impact outcome in the brain injured patient were not specifically reported, but may have overwhelmed the treatment effect of a prolonged TTM strategy. Post-cardiac arrest hyperoxia, for example, has been independently associated with an increase in mortality as well as reduced CPC score at hospital discharge, and current clinical data suggest that this variable should be managed as part of a post-cardiac arrest care bundle (19,20). Targeting an SpO2 >95% (as specified by Kirkegaard et al.) may be helpful reducing the incidence of hypoxia, but not stipulating an upper SpO2 limit increases the patient’s risk of hyperoxia exposure.

Lastly, is this trial generalizable? The authors, and their communities, must be commended for the prehospital care provided for each of the enrolled subjects who had an extraordinarily high incidence of bystander CPR. Both groups had a bystander CPR rate of >80%, followed by basic life support within 1 minute, and advanced life support protocol initiation within 5–11 minutes. ROSC was achieved on average within 30 minutes. There was also a high incidence of shockable presenting cardiac rhythms. As a result, over 60% of both trial arms achieved a CPC score of 1 or 2 at 6 months. Unfortunately, this is often not the case for patients with OHCA in the United States, where the incidence of bystander CPR for witnessed OHCA is under 40% nationally. As a result, incidence of a good neurologic status after discharge rate often suffers, with a national average of well under 50%. With respect to TTM, there is a small body of literature that would suggest that patients who do not receive bystander CPR, or those with a prolonged period of, “No flow time” may benefit most from prolonged TTM (21). Given these results, it would be useful to assess if a longer duration TTM would be beneficial among patients that do not receive a similar quality and intensity of prehospital care.

The development of post-arrest TTM represented a landmark development in the management of OHCA, but many questions remain to be addressed. The work of Kirkegaard et al. highlights the unanswered questions about prescription of TTM, which includes both depth, and duration of therapy. However, the clinical benefit of TTM may be dependent on other factors, including the timing of initiation, other bundled care variables such as the coronary angiography, appropriate oxygenation, and pharmacologic adjuncts to care. Importantly, key physiologic end-points to guide TTM titration require development and incorporation into future clinical trials. The role of newer circulatory support devices during and after OHCA, including the use of extracorporeal membrane oxygenation, will require rigorous testing within clinical trials. Through such work, we hope for advances that will improve survival and long-term outcomes for OHCA patients.

Conflicts of Interest: Dr. Abella receives speaking honoraria from CR Bard and Physio-Control. The other authors have no conflicts of interest to declare.