Hydroxychloroquine (HCQ) is one of the antimalarial drugs that have been used for decades to treat rheumatic diseases (1). Retinal toxicity, neuromyopathy, and cardiac toxicity are recognized toxicities following prolonged use (1). HCQ-induced cardiomyopathy is one of the rare but severe complications which could be reversible with early withdrawal of the drug (2). However, the exact mechanism of HCQ cardiotoxicity remains unclear (1) and the role of heredity has not been studied due to the rare occurrence of the disease. We present a case of twin sisters who both suffered from systemic lupus erythematosus (SLE) and HCQ-induced cardiomyopathy presenting with decompensated heart failure (HF).

A 55-year-old female was admitted for congestive HF at our medical center in February 2017. A transthoracic echocardiogram (TTE) performed in November 2016 at outside hospital revealed normal left ventricular (LV) size, thickness, and a depressed LV ejection fraction (EF) of 35%. Angiography showed normal coronary arteries. She was diagnosed with non-ischemic cardiomyopathy and started on HF medications including hydrochlorothiazide, aldactone, and carvedilol. However, her symptom was not improved and was admitted for further management.

The patient’s medical history was significant for SLE diagnosed in 2008. She had been treated with prednisone 4 mg twice a day and HCQ 200 mg twice a day with an estimated cumulative dose of 1,314 g.

Upon admission, a repeat TTE (Figure 1) was performed and showed mildly to moderately increased LV thickness (1.4 cm). LV systolic function was now severely decreased with an estimated EF of 20%. There was a large apical thrombus measuring 2 cm × 1 cm in the absence of apical aneurysm (Figure 1A, arrow).

The fat pad biopsy of the patient was negative for amyloid. An endomyocardial biopsy was performed. Electron microscopy showed lamellated inclusions and degenerative changes, which was consistent with HCQ toxicity (Figure 1E, arrow).

The patient was started on milrinone treatment and HCQ was discontinued after the biopsy result became available. Intravenous diuresis and angiotensin converting enzyme inhibitor were added to her medical regimen. ICD was implanted for primary prevention.

One month after discharge, the patient was asymptomatic, and her repeat TTE showed that both LV and RV functions had improved with LVEF of 25–30%. The LV apical thrombus had decreased to 1 cm × 1 cm. Eight months after presentation, her repeat TTE showed normal LV wall thickness of 1.0 cm, an LVEF of 50%, and no evidence for LV thrombus.

The patient’s family history was notable for a twin sister with early onset SLE and HCQ treatment for 48 years. The second sister also had severe multi-vessel coronary artery disease and chronic stable angina with multiple drug-eluting stents implanted. In March 2017, 1 month after the first sister was admitted to our hospital, the second sister was admitted with new-onset HF. A TTE showed similar manifestations as the first sister with mildly increased LV thickness, a newly reduced EF of 25–30% (compared to a previous LV thickness of 1.0 cm and an EF of 55–60% 1 year ago) as well as a new apical LV thrombus (Figure 1B, arrow).

Given the very similar presentations and imaging findings on TTE as her twin sister, the second sister underwent endomyocardial biopsy immediately which showed findings consistent with HCQ toxicity (Figure 1F, arrow). Her HCQ was stopped. However, 2 days after the biopsy, she developed severe crushing chest pain and ST elevations in electrocardiogram leads III and aVR. Catheterization did not reveal a culprit vessel and she was medically managed. Her symptom of dyspnea and chest pressure were not improved, and unfortunately, she succumbed to death while undergoing heart transplant evaluation. 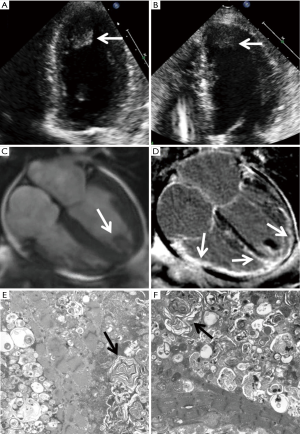 We presented a case of twin sisters both with history of SLE and HCQ-induced cardiomyopathy that manifested as normal LV size, mildly increased LV thickness, severely depressed LV function, and the presence of an apical thrombus. Antimalarial-related cardiotoxicity most commonly manifests clinically as a diffusely thickened restrictive or dilated cardiomyopathy or with conduction system abnormalities including atrioventricular block and bundle branch block (3). The mechanism of cardiotoxicity was still unclear (4).

The echocardiographic findings of our patients were mild concentric LV myocardial thickening and severely depressed LV function. The clinical presentation was decompensated HF. The symmetrically thickened myocardium with decreased function is difficult to differentiate from other infiltrative diseases including amyloid, sarcoidosis, and Fabry disease based on TTE. CMR has played an important role in the assessment of biventricular function and in the evaluation of the extent of myocardial hypertrophy and fibrosis. CMR has excellent sensitivity and specificity for cardiac amyloidosis (5); however, in the setting of myocarditis, the pattern of delayed enhancement may not further differentiate the different causes of myocarditis. The patient presented with severe epi- to mid-myocardial LGE that is consistent with myocarditis, but the typical pathological changes including lamellar bodies as well as curvilinear bodies found in endomyocardial biopsy is determinant for establishing the diagnosis of HCQ-induced cardiomyopathy (6).

As in a number of cases, HCQ-induced cardiac impairment is often underestimated at the early stages and patients often present first with decompensated HF (3,7). It has been reported that cardiac function can recover after the cessation of the drug (2). In our first case, the improvement of cardiac function was observed after stopping HCQ and treating with HF medications.

Screening to detect antimalarial-related cardiotoxicity early is prudent. The monitoring of ECG and echocardiography is recommended for patients with long term treatment of HCQ (6). The risk factors for HCQ-induced cardiotoxicity have not been identified due to limited number of cases reported (1). The duration of use and cumulative dose may play a role, however, toxicities were seen with mean duration of drug administration ranged from 2 to 35 years including cases with only 4 months of administration of HCQ (4). Genetic polymorphism was recently reported for the first time as a cause of change in the enzyme activity in chloroquine metabolism (8). We present the first case of twin sisters both suffered from HCQ-induced cardiomyopathy, with near identical clinical presentation and TTE findings, suggesting that genetic predisposition might be a factor in HCQ-induced cardiomyopathy.