Surgical practice is currently driven by new advances in technology. Minimally invasive techniques, 3-dimensional (3D) pre-operative planning and intraoperative navigation systems are now emerging in the practice of thoracic surgery. These new technologies enable the surgeon to be more precise during technically arduous interventions such as in segmentectomy by video-assisted thoracic surgery (VATS).

VATS segmentectomy is a parenchyma-sparing procedure that is currently considered an effective treatment for benign lesions, metastases or early stage lung cancer (1-4). However, anatomical variations and the difficulty in identifying the intersegmental plane (ISP) often remain technical barriers. New imaging technologies provide a better understanding of the anatomy and can improve pre-operative planning (5,6). Nevertheless, the surgeon needs intraoperative assistance to identify the ISP. As previously described, near-infrared angiography with indocyanine green (ICG) can be helpful in the identification of the ISP during VATS (7-9). In contrast to bronchial segmentation, vascular segmentation with ICG is easier and can enable precise anatomical resection. If we consider that near-infrared angiography leads to a better understanding of the vascular anatomy, this could also facilitate the surgical approach during VATS and improve the success and quality of the segmentectomy (7).

To the best of our knowledge, this is the first study to assess the impact of near-infrared angiography on the intraoperative modification of an anatomical resection during VATS segmentectomy.

We retrospectively analyzed all patients who underwent segmentectomy by VATS with ICG from November 2014 to November 2017 at the University Hospitals of Geneva, Switzerland. The local ethics committee approved the study and informed consent was waived since ICG with near-infrared angiography was already routinely applied during visceral surgery at our institution. All segmentectomies were performed by the same surgeon. All patients with a non-small cell lung cancer (NSCLC) were staged preoperatively (according to the 8th edition of the American Joint Committee on Cancer/Union for International Cancer Control lung cancer staging), and were considered N0 after a thorough preoperative mediastinal staging, including a positron emission tomography-computed tomography (PET-CT) in all patients. All treatment options were discussed pre-operatively by a multidisciplinary tumor board, and intentional segmentectomy was proposed in selected cases (cT1a or cT1b).

Multiplanar CT reconstructions were analyzed preoperatively. The VATS segmentectomy was performed under general anesthesia with lung exclusion by double-lumen intubation. Surgical resection was performed using a three-port approach: utility incision in the fourth intercostal space, 10-mm camera port in the seventh intercostal space anteriorly and a second 10-mm port approximately two spaces below posteriorly. Intercostal blockade using local anesthesia was routinely performed at the beginning of the thoracoscopy. The ISP was identified as previously described by Guigard et al. technique (7). After intravenous injection of ICG solution (12.5 mg), visualization of near-infrared light emitted by the excited ICG facilitated the distinction between vascularized and non-vascularized tissues. All arterial branches supplying the target segment(s) were transected with endoscopic staplers or Ligasure® 5 mm (Covidien, Mansfield, MA, USA). Thereafter, the veins, bronchi, and ISP were also transected using endoscopic staplers. The segmentectomy was completed with lymph node dissection in the case of primary lung cancer. We converted to a lobectomy when lymph node involvement was discovered intraoperatively. A single chest tube was inserted at the end of the procedure.

The patient’ data were analyzed from individual patient’ records. All records were analyzed with respect to patient demographics, histology of the lesion, type of segmentectomy and the clinical outcome. The primary outcome was defined as the need to modify the arterial or parenchymal resection. Complications were defined as major cardiopulmonary complications (using the thoracic mortality morbidity grading) which mainly included atrial fibrillation, myocardial infract, pneumonia, pneumothorax, hemothorax, prolonged air leak (PAL) and acute respiratory distress syndrome (ARDS) (10). Pneumonia was defined by the need of antibiotics for a suspected respiratory infection according to changed lung opacities, fever or an elevated white blood cells count >12,000 per mcL. ARDS has been diagnosed according to the Berlin definition based on Ferguson et al. (11). PAL was defined as an air leak lasting beyond postoperative day seven.

The descriptive statistics for continuous variables were presented as the mean or median, when appropriate, and the categorical variables were expressed as a percentage. A chi-square or Fischer’s exact test was used to analyze the differences between the ICG results and the side or the type of the segmentectomy respectively. Analyses were performed using STATA software, version 14 (StataCorp LLC, Texas, USA).

During the study period, 67 patients (28 men, 39 women) with a mean age of 66±10 years underwent anatomical pulmonary segmentectomy by VATS with ICG (Table 1). The averages for the forced expiratory volume in one second (FEV1) of and the diffusing capacity of the lung for carbon monoxide (DLCO) were 87%±21% and 17%±19% of the predicted value, respectively. The presence of a suspect solitary pulmonary nodule was the major indication for surgery (79%), followed by a proven primary non-small cell lung cancer (18%) and benign lung tumors (3%). All planned segmentectomies are summarized in Table 1.

All patients underwent segmentectomy by VATS; two patients were converted to a thoracotomy due to pleural adhesions (Table 2). The mean operation time was 154±51 minutes. The identification of the ISP with ICG was achieved in 88% (59/67) of patients. In eight patients (12%), there was a diffusion of the ICG into the segment(s) to be removed. The presence of diffusion of the ICG was not side-specific (P=0.99), did not occur in a distinctive segment (P=0.34), and was not correlated to chronic obstructive pulmonary disease (COPD) (P=0.9) nor to the FEV1 (P=0.65). Four patients underwent conversion to lobectomy, including three patients hereafter described with nodal involvement and one patient with an insufficient margin after segmentectomy. 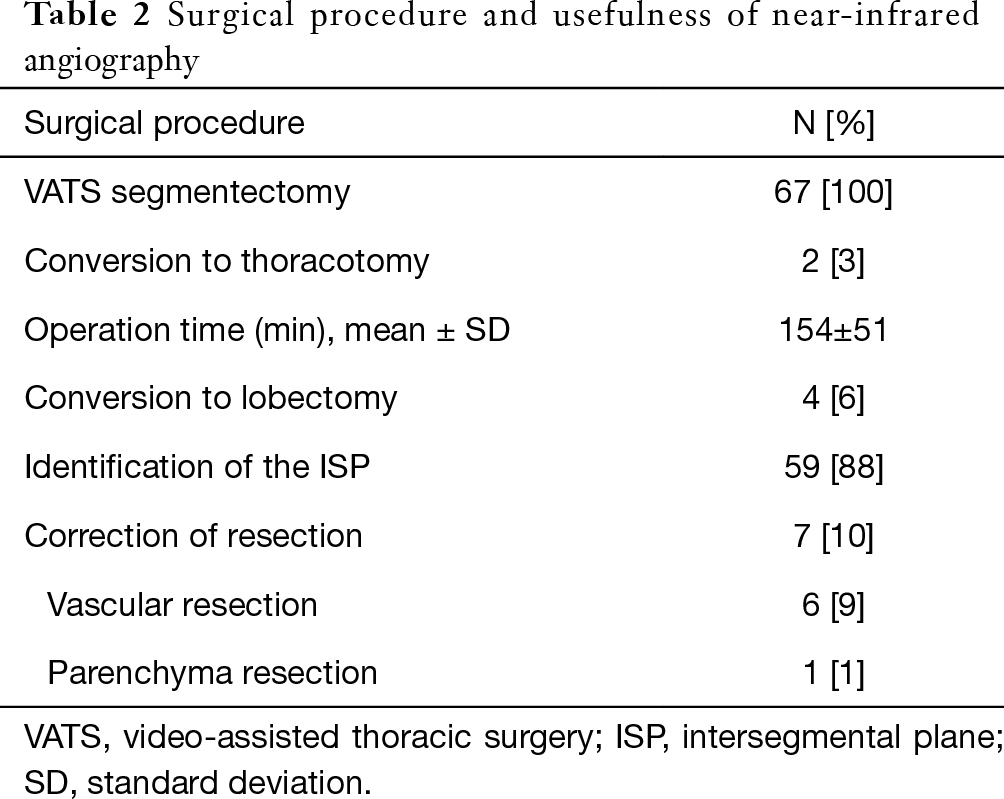 The median duration of drainage was 1 day (range, 0–20 days) and the median length of hospitalization was 4 days (range, 1–27 days) (Table 3). Cardiopulmonary complications with TMM grades ≥2 occurred in 22% of patients. No patient died within 30 days after surgery. The histological analysis revealed a primary lung tumor in 59 patients, including NSCLC (81%) and neuroendocrine tumor (NET) (7%). Nodal upstaging was found postoperatively in eight patients (12%) including two pN1 and six pN2. Conversion to a VATS lobectomy was performed in both patients with N1 involvement and in one patient with N2 involvement (Table 2). In other patients with N2 involvement, completion lobectomy was not performed after the cases were discussed at the multidisciplinary meeting. With a median follow-up of 19 months (IQR: 12–25 months), two patients without nodal involvement had distant recurrences (3%); one had bone metastasis and other had contralateral lung metastasis. 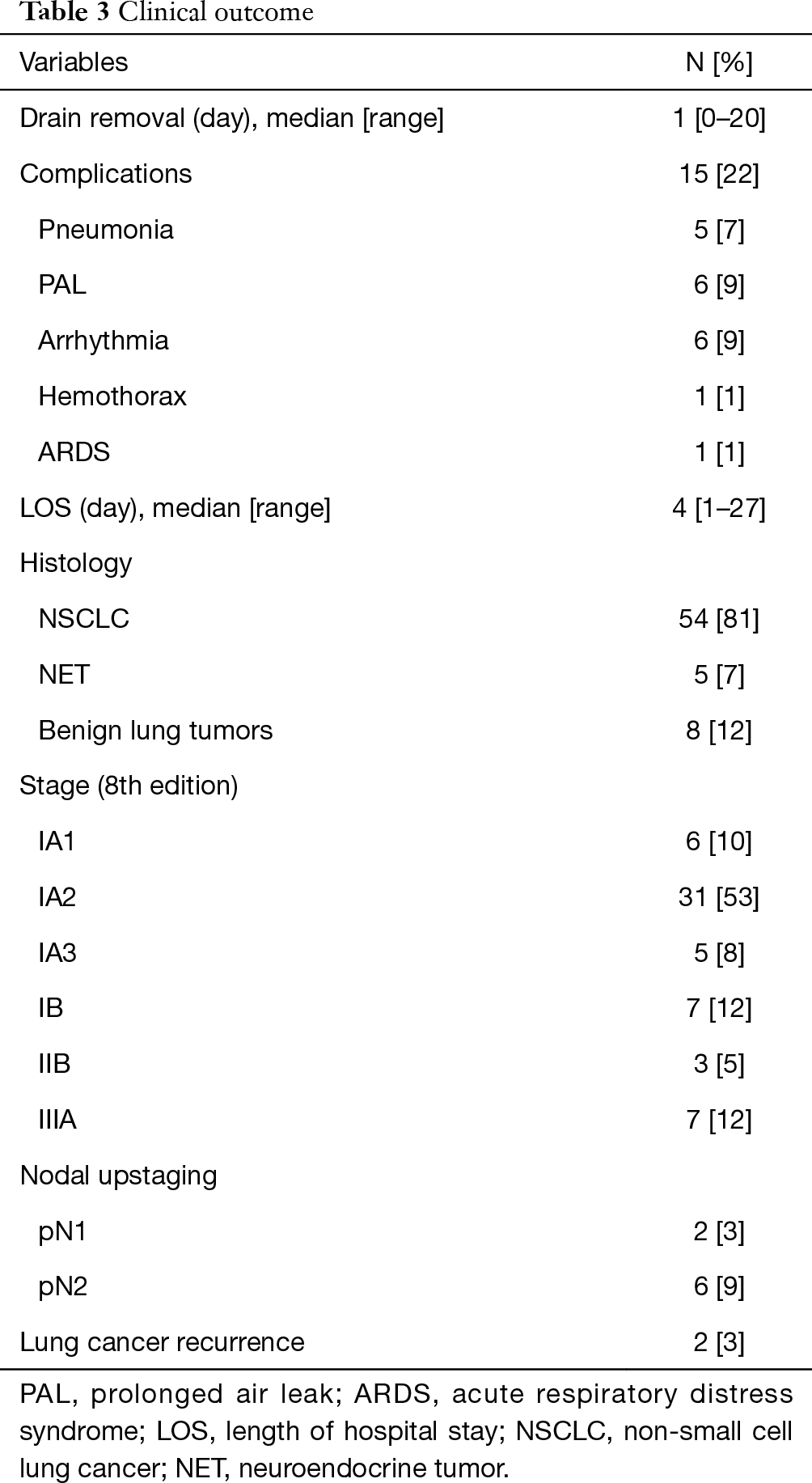 Modification of the anatomical resection

There were no adverse events associated with the ICG injection. A modification of the resection during the segmentectomy was performed in seven patients (10%), thus avoiding inadequate resection (Table 2).

Use of ICG angiography avoided incomplete parenchyma resection in one patient with an unexpected devascularized ventral segment during a planned apico-dorsal segmentectomy. In six patients, near-infrared angiography allowed the identification of the vascular anatomy to change the site of arterial resection. This correction of arterial resection was mainly observed in the upper division segments (n=4). However, there was no association between the type of segmentectomy and the need to change the resection (P=0.64).

The aim of this study is to assess the impact of near-infrared angiography on the quality of the VATS segmentectomy procedure.

Pulmonary segmentectomy by VATS is being increasingly proposed for peripheral suspicious nodules, metastases or in early stage lung cancer ≤2 cm with no nodal involvement (1,4), even in patients with good lung function. In our study, lung cancer was the main indication for VATS segmentectomy. New imaging technologies, such as in 3D pre-operative planning or intraoperative navigation are now becoming a part of general practice in thoracic surgery to improve an anatomical resection. However, despite the possibility of performing 3D segmentation preoperatively, the ISP remains difficult to identify intraoperatively.

A previous study by Guigard et al. showed that near-infrared angiography allows the identification of the ISP with a success rate of 100% (7). In our study, the ISP was not accurately identified in 12% of patients. This result is quite similar to that of Tarumi et al. (15%) (9). The collateral vascularization between the pulmonary and bronchial circulation could explain this result. It has been hypothesized that some conditions leading to narrowing of the pulmonary vasculature, such as emphysema, increase proliferation of bronchial vessels resulting in anastomoses with the pulmonary vascular system (12). However, in our study, COPD and FEV1 were not associated with ICG diffusion. Another hypothesis is that the different embryological origins of the pulmonary arterial tree between the distal pulmonary arteries and the main trunk can explain the development of aortopulmonary collateral arteries (13-15). Nevertheless, near-infrared angiography permits identification of the ISP precisely and promptly in a large proportion of patients. Furthermore, visualization of the ISP ensures an oncological resection margin.

A precise and adequate anatomical segmentectomy is necessary to evaluate an oncological resection as well as the clinical outcome. The singularity of the anatomy for each patient makes this type of resection difficult. Being able to delimit the resection area makes it possible to know whether to remove more or less. In 10% of patients in our study, near-infrared angiography resulted in a modification of the anatomical resection being required. For example, the extent of the parenchymal resection maybe adapted if more parenchyma than anticipated has been devascularized at ICG angiography thus avoiding post-operative complications (infarction, infection, etc.). If in doubt, the artery maybe clamped before its transection thus making sure the correct segment is targeted and avoiding errors. On the other hand, additional arterial branches may be ligated if the angiography shows that the margin is inadequate or the targeted segment(s) is not entirely devascularized. The ICG angiography can be easily and safely repeated once or twice if necessary. Near-infrared angiography with ICG improves the quality of the anatomical resection without increasing duration of surgery.

The clinical outcome was satisfactory. The rate of complications was well comparable to other studies (16-18).

The limitations to the present study are the retrospective design of the study and the lack of a control group. Further research with a larger sample size should be carried out to compare the oncological outcome in early stage lung cancer with or without near-infrared angiography.

In conclusion, near-infrared angiography is a valuable technical adjunct and is effective in improving the quality of VATS segmentectomy. New imaging technologies for preoperative planning and intraoperative navigation may result in an improvement in the surgical procedure and could be useful for educational purposes.

Ethical Statement: The study was approved by the local ethics committee (IRB number: 2017-01767) and informed consent was waived since ICG with near-infrared angiography was already routinely applied during visceral surgery at our institution.