Prof. Laureano Molins: work with the only objective of the benefit of the patient and the next generation of your profession

This interview features Prof. Laureano Molins, the founder and past president of the European Society of Thoracic Surgeons (ESTS) and co-president of the 11th World Congress on Lung Cancer (IASLC) in July 2005. From the beginning of deciding to become a thoracic surgeon, Prof. Molins has dedicated his life to this profession.

In this interview, Prof. Molins shared with us his philosophy in work and life.

Laureano Molins (Figure 1) graduated from Barcelona University Medical School in 1981. He followed specialty training in general and thoracic surgery (board-certified) at the Red Cross Hospital (Barcelona, Spain) (1982–1986); Mayo Clinic (Rochester, MN, USA), New England Deaconess Hospital (Boston, Mass, USA); Massachusetts General Hospital (Boston, Mass, USA), (1986–1987). He received his PhD degree in 1995 from the Autonomous University of Barcelona and is associate professor of surgery at the University of Barcelona since 1995 and fellow of the European Board of Thoracic and Cardiovascular Surgery (2001). During his training and as a certified thoracic surgeon, he visited several institutions in United States and Europe for additional training. As a thoracic surgeon he worked in Barcelona at Hospital Sagrat Cor, University of Barcelona (1990–today) and as chief since 2000. He is also consultant and chief of Thoracic Surgery, Thorax Institute, Hospital Clinic since 2010, and professor of the master in respiratory diseases (since 2007) and lung cancer diagnoses and treatment (since 2014) at the Barcelona University. His major interests are surgical treatment of lung cancer, thoracic oncology in general and chest wall deformities. He is a member of several national and international medical societies (STS, AATS, IASLC, EACTS, ERS) and president of the European Society of Thoracic Surgery (2008–2009). He has been co-president of the 11th World Congress on Lung Cancer (IASLC) in July 2005 and director of the International Meeting on General Thoracic Surgery in nine editions (1992–2018) (www.thoracicsurgery2018.org). He is reviewer and has multiple presentations and publications in National and International Meetings and Journals. 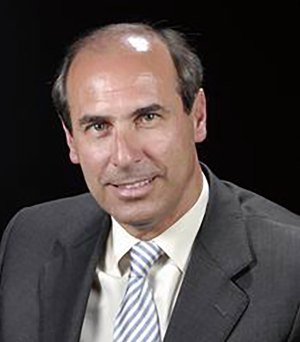 JTD: When did you decide to be a thoracic surgeon? Why?

Prof. Molins: I first trained as general surgeon for 5 years with a real master in surgery, Dr. Manuel Galofré, at the Mayo Clinic (Figure 2). In our service in Barcelona we performed all kinds of surgery (digestive, thoracic, head and neck, gynecologic..). Quickly I understand that thoracic surgery was the most challenging surgery. So, I had the opportunity to complete my thoracic surgical training at Mayo Clinic in Rochester, MN, New England Deaconess Hospital and Mass General Hospital in Boston, MASS, USA. 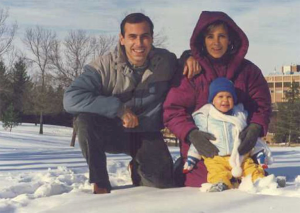 Figure 2 Prof. Molins at Mayo Clinic with his wife Cuca and their first daughter Miriam (1986).

JTD: How would you describe the training of thoracic surgery in Spain?

Prof. Molins: As I said, I didn’t take my thoracic surgery training in Spain but I know that it is a very good training. The only “but” is that in my opinion, only 1 year of general surgery out of 5, is not enough. I think that at least 2–3 years of general surgery is essential for any subspecialty of Surgery.

JTD: What do you think the training in thoracic surgery in other countries has brought to you?

Prof. Molins: The most important has been the broad spectrum of thoracic surgery, including the esophagus that in Spain is performed by the digestive surgeons. Also, the multidisciplinary approach and the regular weekly sessions on “morbidity-mortality”, “difficult cases”, “oncologic grand rounds”, etc. were important for me as part of the training.

JTD: Are there any cases in your medical career that touch you most?

Prof. Molins: Sometimes I will encounter the patient on whom preoperatively I am not sure if a complete resection of his/her lung cancer can be achieved and when I confirm intraoperatively that it can be done, I think it is the best news that I can give to the patient and his/her family. Then you know that he/she has the capability to be cured from his/her malignancy… This still touches me every day!

JTD: Are there any setbacks along the way of becoming a thoracic surgeon?

Prof. Molins: Study a lot and work without thinking if you are tired..

JTD: If there were a chance, what would you like to say to the people that helped you along the way?

Prof. Molins: I still tell them that their help was absolutely necessary for my career and I am so grateful (Figure 3). 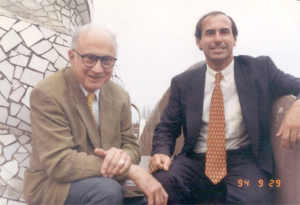 JTD: What do you think is the role of thoracic surgeons in computed tomography (CT) screening for lung cancer?

Prof. Molins: Thoracic Surgeons play a major role in CT screening for lung cancer, because we know very well the fact that the earlier we diagnose the tumor, the better survival is achieved. In fact, today only 3 out of 10 patients diagnosed of lung cancer are candidates for surgical resection.

JTD: For lung oligometastases of colorectal cancer, which treatment strategy will you choose: surgery or stereotactic radiotherapy? Why?

JTD: For colorectal cancer patients with lung metastases, is lymphadenectomy necessary or not?

Prof. Molins: Yes, in the Spanish Colorectal Metastasectomy Registry (GECMP-CCR), Dr. Call et al. demonstrated that the patients, on whom a mediastinal lymphadenectomy was performed, had better survival.

JTD: As the founder and past president of European Society of Thoracic Surgeons (ESTS), co-president of the 11th World Congress on Lung Cancer (IASLC) in July 2005, are there any stories impressing you most in the way of building the international community?

Prof. Molins: It has been a great experience to be one of the founders of the ESTS, because at that time, 1993, I was 35 years old consolidating my thoracic surgical career and all the co-founders were masters in the specialty (Figure 4). I learned a lot from them and after being at the ESTS Council, I had the privilege to be elected as president (2008–2009), which was also a great experience because of the expansion of the society all over the world (Figure 5). 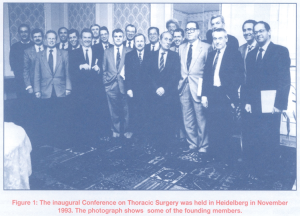 Figure 4 This inaugural conference on thoracic surgery was held in Heidelberg in November 1993. The photograph shows some of the founding members. 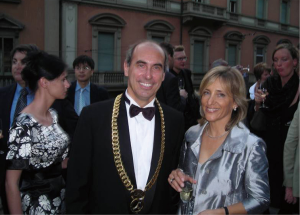 Regarding the co-presidency of the 11th World Congress on Lung Cancer (IASLC) in July 2005 in Barcelona with Dr. Rafael Rosell, it was a challenge joining all the specialties that take part in the prevention, diagnosis and treatment of lung cancer and working all together.

Personal experience and wisdom of life

JTD: What is your source of inspiration in your work and life?

Prof. Molins: I learned from my parents to respect everybody and to be honest with myself and with the people around me, trying to help them and with a big smile…!

JTD: What do you think is the most important factors for a surgeon to become successful both in the clinical practice and the academic arena?

Prof. Molins: The work well done with the only objective of the benefit of the patient and the student/resident. Both, patients and students/residents need your professionalism to achieve the goals.

JTD: Would you like to give some advice for the young surgeons?

Prof. Molins: I always say that our profession is different from all others..! Mainly because it is a privilege to connect with a person many of the times in his/her worst moment of their life’s. The responsibility of our work is so important because if we perform a good job, the patient can achieve, at least, a better quality of life.