Complete video-assisted thoracoscopic surgery is a widely used minimally invasive procedure for the management of lung cancer. However, the indication is most often limited to early lung cancer. Because many patients with advanced lung cancer require bronchoplasty, thoracoscopic surgery is generally not indicated. Segmentectomy for lung cancer was performed in 4,143 patients in 2014 according to the annual report of the Japanese Association for Thoracoscopic Surgery. However, sleeve segmentectomy was done in only 16 patients (1). Bronchoplasty is technically difficult to perform via a thoracoscopic approach because the insertion angle of the needle holder and the manipulation of the needle are generally restricted. Open surgery is therefore often performed. We describe a patient in whom bronchoplasty could be relatively easily performed via a thoracoscopic approach by using improved methods for suturing the bronchi and handling suture material in the thoracic cavity, leading to the preservation of respiratory function.

The patient was a 74-year-old man who had a past history of chronic obstructive pulmonary disease (COPD) and received home oxygen therapy (2 L). Computed tomographic examinations during the follow-up revealed an 8-mm nodular shadow in the B6 bronchus of the right lower lobe. It obstructed the B6a and B6b bronchi. The peripheral margin was not seen. A bronchoscopic biopsy revealed squamous-cell cancer (Figure 1A), with no evidence of distant metastasis. Clinical T1aN0M0 disease was thus diagnosed according to the 7th edition of the American Joint Committee on lung cancer staging manual. On preoperative respiratory-function tests, the forced expiratory volume in 1 second (FEV1) was 2,330 mL (FEV1%, 62%), and the percent predicted diffusing capacity of the lung for carbon monoxide (DLCO%) was 31.7%. To preserve respiratory function and respiratory muscles, we performed a thoracoscopic right S6 sleeve segmentectomy with hilar lymph node dissection.

Figure 1 Bronchoscopic findings. (A) There was a nodular lesion at the inlet of the right B6 bronchus (black arrow) before surgery; (B) the patency of both the middle bronchus and basal bronchus were good 1 month after surgery. M, middle lower bronchus. 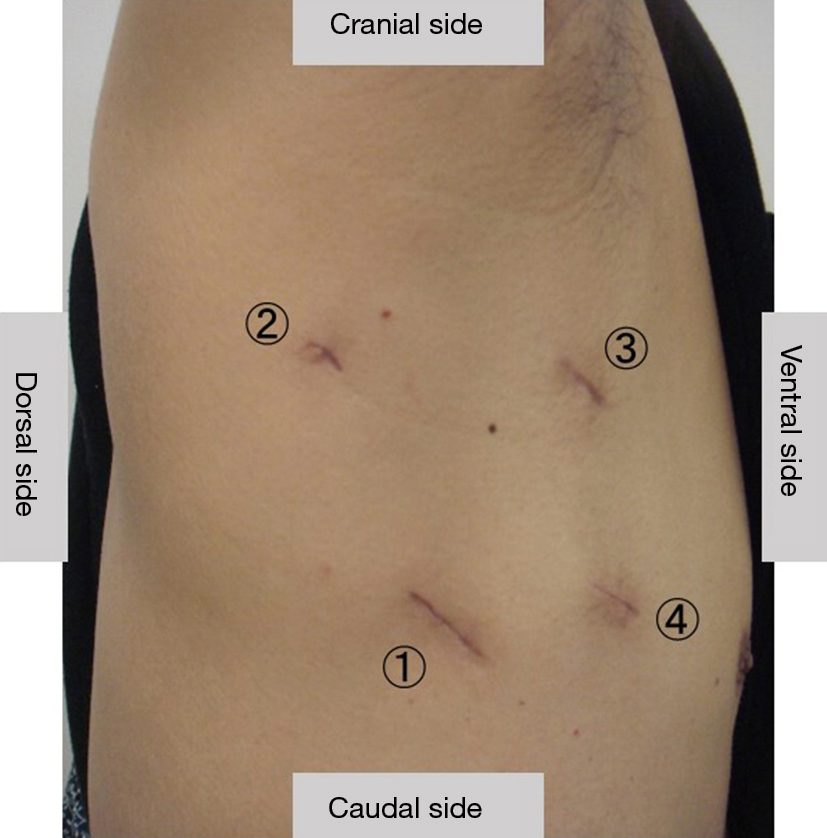 A scalpel and endoscopic scissors were used to perform sleeve segmentectomy of the lower bronchus lobe of the lung, and the superior segment of the right lower lobe was removed. The bronchial resection margin was confirmed to be pathologically negative in a frozen section, and the distance between the tumor and the incision margin was 5mm. To preserve the middle bronchial lobe, the central bronchial margin was dissected at a slightly oblique angle to the long axis of the bronchus. The peripheral bronchus was transected nearly vertically to the bronchial axis.

To facilitate suturing, the bronchus was closed using a combination of continuous sutures and simple interrupted sutures. The surgical sutures used were 4-0 Prolene® RB-1 (Ethicon, Somerville, NJ, USA). The mediastinal part of the bronchus was continuously sutured. The remaining part was closed with 9 stitches applied from the dorsal side to the ventral side of the mediastinum. These sutures were placed outside of the thoracic cavity via an assistant aperture without being tied and were grasped by forceps. To prevent entanglement of the sutures in the thoracic cavity, a small piece of Naruke Solacotton® (KenzMedico, Saitama, Japan) was inserted from an assistant aperture, and the sutures were pulled towards the dorsal and caudal sides of the mediastinum in the thoracic cavity (Figure 3). This step allowed a working space to be secured for further handling of the sutures. The sutures were ligated from the ventral side towards the dorsal side of the mediastinum. 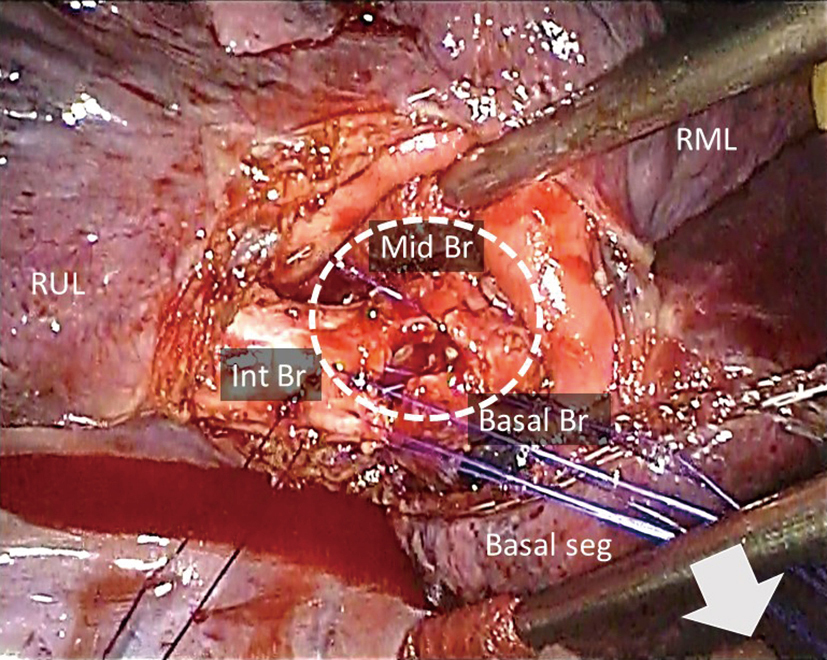 After suturing, the airway pressure was increased to 30 cmH2O to perform aerial fistula testing. No aerial fistula was observed at the bronchial anastomosis. A pericardial fat pad was inserted into the space between the anastomosis and the pulmonary arteries. The operation time was 191 minutes, and the bleeding volume was 5 mL (Figure 4). 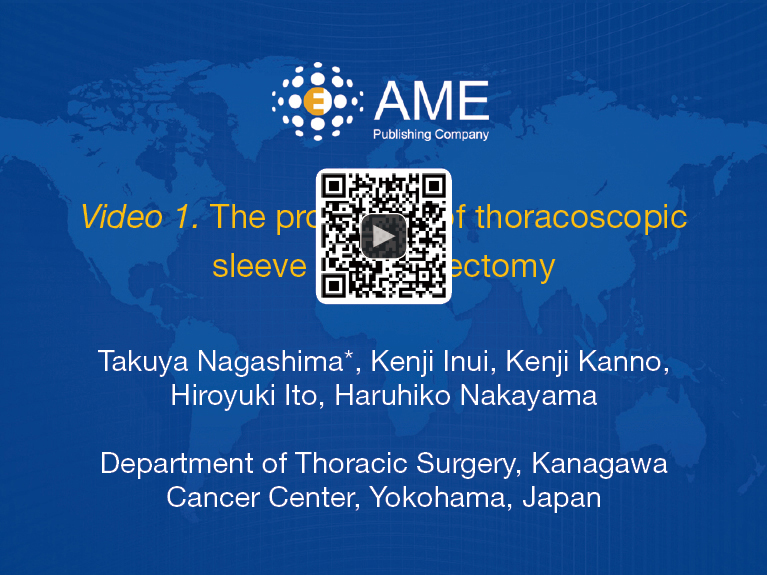 Generally, sleeve segmentectomy is performed only in patients with decreased pulmonary function in whom the preservation of pulmonary function is a priority. On the other hand, thoracoscopic surgery has been reported to minimally impair the respiratory musculature and to cause a particularly low decrease in respiratory function during the early postoperative period (3). Our patient was receiving home oxygen therapy before surgery, making it imperative to minimize loss of respiratory function. Thoracoscopic sleeve segmentectomy was therefore selected as the procedure of choice. Although radiotherapy was also considered, such treatment carried the risk of causing radiation pneumonitis. We decided to perform surgery, which has a higher probability of leading to radical cure. Okada et al. performed sleeve segmentectomy in a series of 16 patients with lung cancer and reported that no patient had recurrence and stressed the importance of the histopathological evaluation of the resection margins during surgery (4). We thus intraoperatively evaluated the resection margins and believe that there is a good chance of achieving cure. Although some studies reported that the false negative rate of the bronchial margin in frozen sections was1.9–50% (5), the margin in our case was negative in both the frozen section and final histological examinations.

In our study, we modified two points of the technique used to perform bronchial suturing. First, we used a hybrid technique that combined continuous sutures with simple interrupted sutures. As reported by Berthet et al., in this technique the mediastinum is closed with continuous sutures, and other parts are closed with simple interrupted sutures (6). Continuous sutures have been reported to be relatively easy to manage even during complete video-assisted thoracoscopy. However, if suturing and the final ligation are incorrectly performed, the entire procedure must be repeated. Therefore, performing this technique by thoracoscopic surgery carries a high risk. In contrast, the use of only simple interrupted sutures not only increases the number of ligations, but also causes difficulty in suture management, prolonging the operation time. However, resuturing of simple interrupted sutures is relatively easy. We therefore combined these two methods. Our method was particularly useful for performing thoracoscopic surgery, associated with difficulty in stitching and suturing. Li et al. performed video-assisted thoracoscopic sleeve lobectomy with bronchoplasty using this method in 11 patients and found that the operation time was similar to that of open surgery and allowed the incidence of complications to be decreased (7).

Second, to manage the sutures, we pulled the completed sutures dorsally and caudally in the thoracic cavity. Because thoracoscopic surgery requires only a small incision, sutures that run parallel in the region from the suture site to the wound are apt to entangle. By deploying the sutures placed in the bronchi toward the dorsal side of the thoracic cavity, a working space was created on the abdominal side, which was useful for preventing suture entanglement. Moreover, because stitching was basically performed from the caudal side toward the cranial side, it was useful to deploy the sutures in a caudal direction so that the newly placed sutures would not come in contact with the sutures that had already been placed on the cranial side.

Thoracoscopic sleeve segmentectomy is technically challenging. However, this procedure may be useful for enhancing the curability of lung cancer and the preservation of respiratory function in appropriately selected patients who undergo refined surgical techniques.