Recently, three-dimensional (3D) printers have become increasingly used for a wide variety of applications. In the medical field, the 3D printer has revolutionary potential, and 3D models are also useful simulation tools to prepare for thoracic surgery, particularly bronchial stenting (1,2).

The incidence of pectus excavatum has been estimated at between 0.1% and 0.8% though a large autopsy series reports (3). After publication of the Nuss procedure for pectus excavatum, it became widely accepted. Further technical developments have occurred after the initial experience in 1987, and the frequency of bar displacement has decreased (4,5). However, there are still some complications, such as over-correction, recurrence, bar allergy, and wound infection (6). In particular, over-correction and recurrence are considered to be partially the result of technical issues. The details of the Nuss procedure have been generally established, but the surgeons must still decide how to insert the bars in each case.

To reduce the differences due to surgeons’ experience, a simulation might be helpful before the operation. As a new idea, mimic surgery was used with a specific patient’s 3D chest wall model made by a 3D printer.

CT data were used to construct a 3D digital model of the patient’s bronchial tree, creating a stereolithography file as the output. The model was directly printed using a 3D printer (Object 260, Stratasys No. 33201, Eden Prairie, MN, USA), as previously described (7). The chest wall model was composed of hard material for the ribs and soft material for muscles and skin, similar to the actual chest wall (Figure 1). Furthermore, metal bars of the same size and shape as the actual bars used in Nuss surgery were made and used. 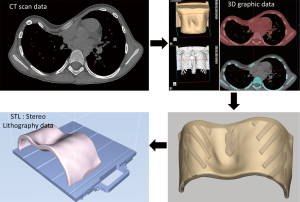 The patient was a 13-year-old male with severe pectus excavatum of his chest wall that had been noted at a young age. He had had a right lower lobectomy due to a congenital cystic adenomatoid malformation (CCAM) on the first day after birth. His height was 143 cm, and he weighed 28.1 kg. He had right bundle branch block. The Haller CT index was 12.8. The Nuss operation was planned for the patient, and a simulation of the Nuss operation was performed using the patient’s specific 3D model made by the 3D printer, as described. The aim of the simulation using a 3D printed model in such a case was to confirm where to insert the bars, how many bars to insert for the best outcome, and how much improvement could be achieved.

In the simulation using the 3D printed model, the bars were inserted from the 5th, 6th and 7th intercostal spaces (ICSs) to determine the best way to lift the depressed area, and it was confirmed that the best way to improve the depressed area would be to use two bars from the 5th and 7th ICSs (Figures 2,3). The plan prior to the operation was to first insert the bar from the 5th ICS and then to observe the improvement. If it was insufficient, the next bar from the 7th ICS would be inserted, as in the simulation (Figure 4). 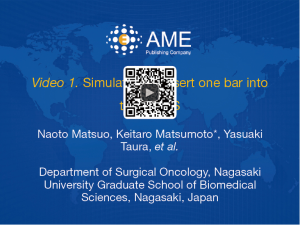 Figure 2 Simulation to insert one bar into the 6th ICS. The bar is inserted into the 6th ICS and rotated in the chest cavity (8). ICS, intercostal spaces. Available online: http://asvidett.amegroups.com/article/view/22889 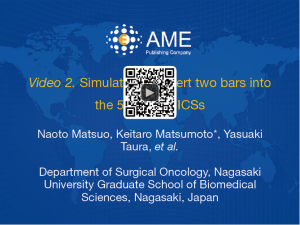 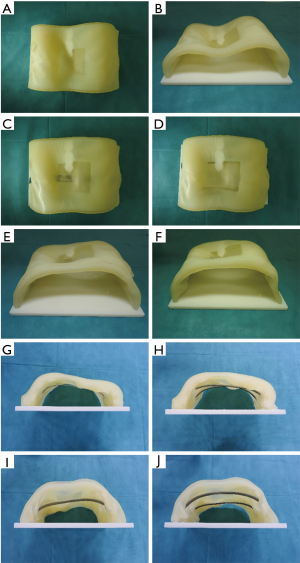 During the operation under general anesthesia, a bar was first inserted from the 5th ICS, as in the simulation. A 3 cm incision was made at the right anterior axillary line of the 5th ICS and the left anterior axillary line of the 5th ICS. Since there were considerable adhesions in the right chest cavity because of the last thoracotomy, the adhesions were dissected bluntly by the fingers. The introducer was then inserted from the right 5th ICS to reach the left 5th ICS incision though the back of the sternum, confirming safety by thoracoscopy. The nylon band was then put through the tunnel to keep it for the bar insertion. The bar, 270 mm long and 15 mm wide, was inserted into the tunnel from right to left under nylon band guidance. After bar rotation, the depressed sternum was lifted up, but the xiphoid process and costal cartilage were not sufficiently lifted. Thus, it was decided to insert one more bar in the 7th ICS, as in the simulation. The bar, 250 mm long and 15 mm wide, was inserted using the same procedure as for the first bar. After rotation, the depressed chest wall was almost satisfactory (Figure 5). A stabilizer was used for the 5th ICS bar. The operation time was 105 minutes, and blood loss was 3 mL. During and following surgery, the patient did not experience any complications other than chest pain, which required a change of analgesic drugs, and he was discharged 18 days after the operation. 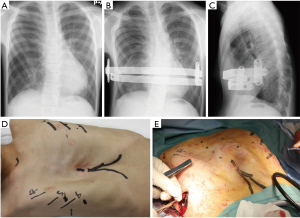 This study was approved by the Ethics Committee of Nagasaki University Hospital (approval number, 16092618).

In the last few years, there has been a dramatic increase in the popularity of 3D printing and in its application in many areas of medicine (1,2,7,10,11). In the simulation of surgery, 3D models offer several advantages, including the ability to visualize the situation using the patient’s specific anatomy. In cases such as the present one, the model can be used to insert the bars in the ICSs and confirm the improvement of the depressed area in a practical manner. In fact, in the surgery for the present case, the bars were inserted at the same site as in the simulation. This gave the surgeons confidence in the procedure, and it saved time in identifying the best operative procedure.

After publication of the Nuss procedure for pectus excavatum, it became widely accepted. It has undergone technical development after the initial experience in 1987, and the frequency of bar displacement has decreased (4,5). However, there are still some complications in the early postoperative period, such as pneumothorax, suture site infection, pneumonia, pericarditis, and hemothorax. On the other hand, in the late postoperative period, different complications, such as bar displacement, over-correction, recurrence, bar allergy, and wound infection, can occur (6). In particular, displacement, over-correction, and recurrence are partially due to technical issues. These surgical candidates are selected for minimally invasive repair of pectus excavatum (MIRPE), but the severity varies among the patients. The details of the Nuss procedure have generally been established, but it is still necessary for the surgeon to decide how to insert the bars in each case, based on experience. In the present case, one bar was inserted to fix the chest from the 5th, 6th, and 7th ICS, but it was not enough. Then, two bars were inserted from the 5th and 7th ICS. With this, the chest wall was fixed sufficiently, better than with only one bar. Thus, by using the patient’s specific 3D printed chest wall model, the number of bars necessary and the appropriate ICSs to insert the bars to fix the chest wall were confirmed pre-operatively. This means that the simulation was useful for formulating the strategy.

On the other hand, psychological problems are also important in patients with this disease. There are a few patients who have suicidal ideation as a result of their deformity. Children have an aversion to deformities and may experience severe psychological trauma (12). This means that pectus excavatum could put pressure on the surgeons not to fail. Thus, a decrease in complications such as displacement, over-correction, and recurrence is crucial for those who are related to the patient. From this perspective, the size, number, and healing of the skin incisions are also important. A simulation using a 3D printed model could contribute to resolving these issues.

In making the 3D printed model, it has been difficult to make models that are very similar to the patient because it takes a long time, is expensive, and requires many types of materials. In our 3D printing machine, two different types of materials can be used, VeroWhitePlus (a rigid opaque material) and TangoPlus (a rubber-like material) (13). Furthermore, we made another type of material by using two layers of TangoPlus with free space, which was softer than the monolayer TangoPlus. VeroWhitePlus was used for ribs, two layers of TangoPlus were used for intercostal muscles, and a monolayer of TangoPlus was used for the cartilage area. These were used to mimic the chest wall in our 3D printed model.

In conclusion, the novel use of a customized 3D printed model based on patient-specific data as a simulation of the Nuss procedure can be used to confirm where to insert the bars and how many bars to insert to achieve the best outcome and to predict how much improvement can be achieved. These may be helpful for surgeons to visualize the steps of the procedure and can increase the surgeon’s confidence to complete it.

Informed Consent: Written, informed consent was obtained from the patient for publication of this manuscript and any accompanying images.