Invasive examinations in patients with suspected lung cancer: more may be too many

We recently read the article entitled “Principles of biopsy in suspected lung cancer: priority still based on invasion in the era of targeted therapy?” published in Journal of Thoracic Disease by Chen et al. (1). They investigated a 53-year-old male patient with 10-year history of dust exposure who presented at hospital with bloody sputum. He underwent sequential positron emission tomography/computed tomography (PET/CT) scanning, transthoracic core needle biopsy of the lung mass, resection of an intramuscular nodule, bronchoscopy, and right upper lung lobectomy. The final diagnosis was systemic lipid deposition. The authors concluded that the decision to perform biopsies in patients with suspected lung cancer should consider clinical management issues, acquisition of tissue, invasion, efficiency, and cost, in decreasing order of priority.

Biopsy is essential for the diagnosis of lung cancer, and nearly all confirmed lung cancers depend on examination of biopsy tissue. Especially in the event of a positive PET/CT result, numerous invasive procedures may be carried out to confirm or rule out the presence of lung cancer. However, invasive examinations should be performed cautiously in patients with a defined history of underlying disease (e.g., pulmonary silicosis, tuberculosis infection, sarcoidosis), even in patients with a positive PET/CT result.

We report on a 68-year-old man with a 30-year history of pulmonary silicosis. His complaints were cough, expectoration, chest pain, and weight loss (7 kg) over a 1-month period. A CT scan showed a right hilar mass complicated by right lower lobe atelectasis, and multiple bilateral mediastinal lymph nodes (Figure 1, panel A). Fiberoptic bronchoscopy and biopsy were performed and chronic mucosal inflammation with no tumor cells was found. The patient was admitted to our hospital for further diagnosis and treatment. Routine blood and serum tumor markers (CEA, AFP, CA125, CA199, CA724, CYFRA21-1, and NSE) were within normal ranges. PET/CT scanning showed consolidation of the posterior segment of the right lower lobe. The maximum standard uptake value (SUV) was 9.0 (Figure 1, panel B). Mediastinal and bilateral hilar lymph nodes were enlarged, and the radioactivity uptake was increased with a maximum SUV of 11.7 (Figure 1, panels B and C). Because of a clinical suspicion of lung cancer, the patient underwent percutaneous lung biopsy (PLB) three days later. The pathology results showed inflammatory granulation tissue (Figure 1, panel D). Transbronchial needle aspiration (TBNA) was performed five days later, and a few chronic inflammatory cells and tissues were identified by pathology (Figure 1, panel E). However, no evidence of tumor was found after a series of invasive procedures. The patient was finally recommended to undergo mediastinoscopy or thoracotomy, but chose to undergo conservative treatment instead, because of the invasive nature of the procedures. Atelectasis improved markedly after two months of anti-infective, anti-inflammatory, and anti-fibrotic treatment (Figure 1, panel F).

Biopsy plays a vital role in lung cancer diagnosis (2). However, invasive examinations should be performed with discretion in patients with a defined history of underlying disease. As suggested by Chen et al. (1), the choice of biopsy in cases of suspected lung cancer should take account of clinical management issues, acquisition of tissue, invasion, efficiency, and cost, in decreasing order of priority. In this case, negative bronchofiberoscopy results should have stopped further invasive examinations. The lung lesions and mediastinal lymph node enlargement should have been considered the results of silicosis, and treated accordingly. 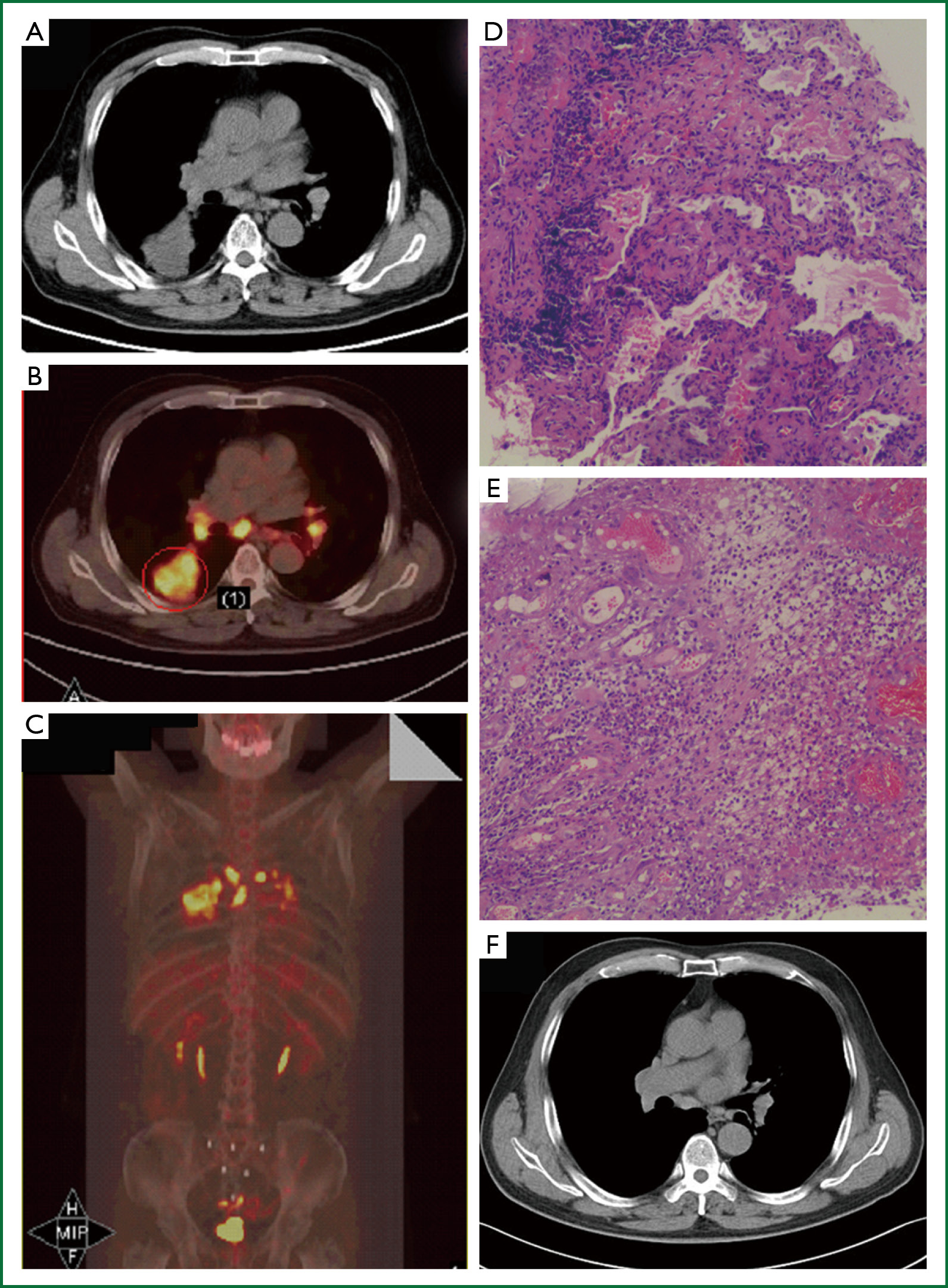 Invasive procedures should be restricted when there is no evidence of lung cancer. However, some invasive examination may be required. Figure 2 shows a diagnostic flow chart for this patient. In this case, we suggest that the first and second steps (enhanced CT and bronchofiberoscopy) were necessary to distinguish the character of the mass. The third step (PET/CT), however, should not have been recommended, because it may have confused the diagnosis. Lesions such as tuberculosis, fungal infection, sarcoidosis and silicosis may demonstrate high fluorodeoxyglucose uptake and be difficult to differentiate from tumors (3-7). The fourth (PLB) and fifth (TBNA) steps likewise were unnecessary because of the confirmed result of the second step and the defined baseline disease. The proposed sixth step (mediastinoscopy or thoracotomy) was also unnecessary.

The dotted lines and marks (②-⑥) on the left side of Figure 2 were the ideal sequence of the diagnosis. Since mediastinal or hilar lymphadenophathy were the major indications for using TBNA (8,9), TBNA was suggested as the first step. Although mediastinoscopy was widely used in diagnosis of lung disease, we do not use it as routine clinical examination, because of the high risk of mediastinoscopy and the worsening doctor-patient relationship in China (10). 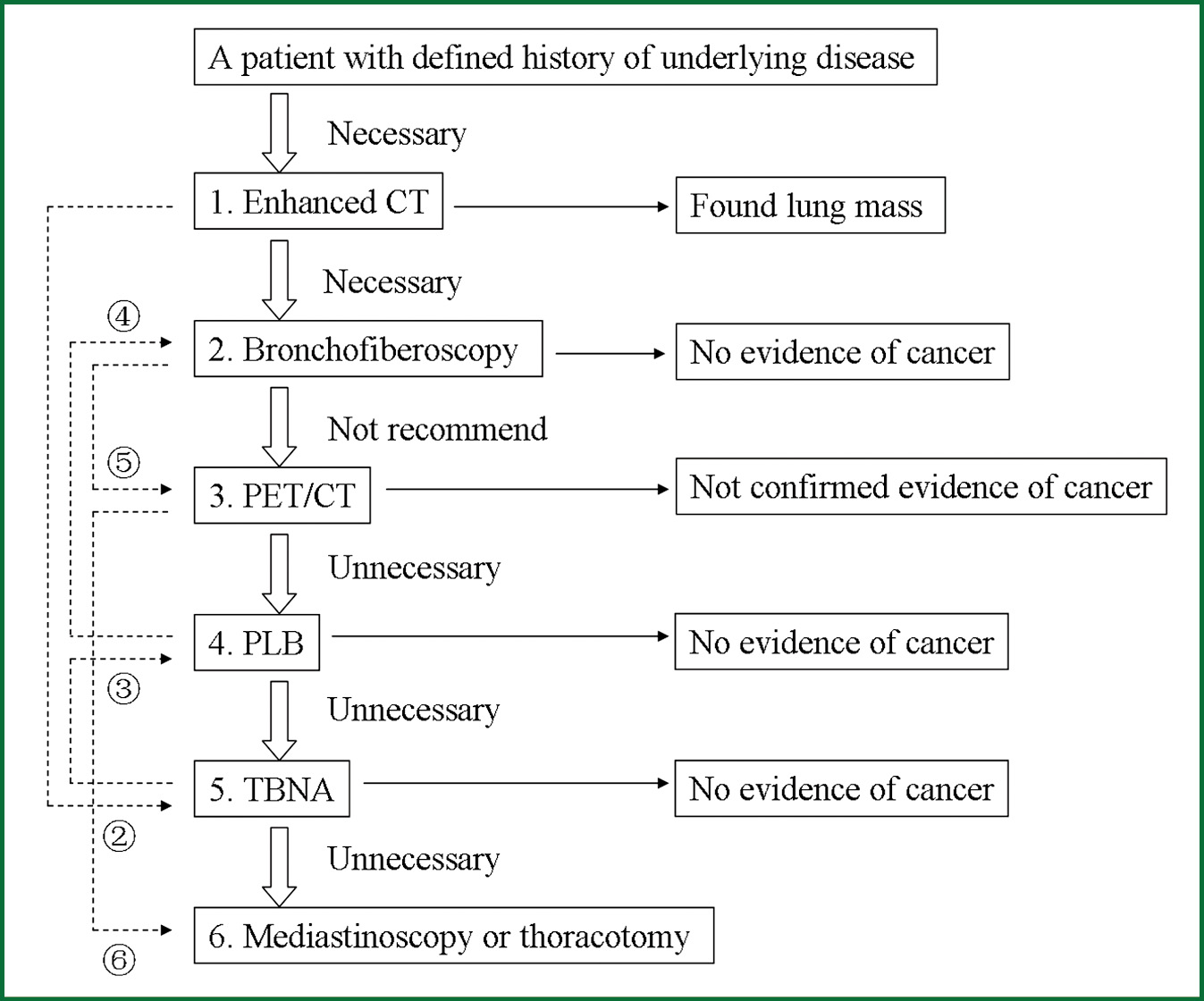 We conclude that invasive examinations should be limited in patients with suspected lung cancer who had a defined history of underlying disease. Minimal invasion with careful acquisition of the appropriate quantity and quality of tissue should be adequate.