Electromagnetic navigation bronchoscopy in the thoracic hybrid operating room: a powerful tool for a new era

Hybrid procedures are already well-established techniques in some surgical specialities such as Vascular Surgery or Neurosurgery for a number of years. However, the application of these techniques in Thoracic Surgery is relatively novel. Despite its recent emergence, thoracic hybrid procedures are spreading quickly around the world. The proof of this is the increasing number of manuscripts published about this topic during the last few years (Figure 1). These hybrid techniques are mainly used for a single-stage localization and resection of subcentimetric and/or subsolid pulmonary nodules. Intraoperative digital palpation might become challenging for this kind of lesions, especially when minimally invasive surgical approaches are performed. Additionally, the trend to reduce the number of access-ports in the thorax might also make the manual palpation of the lung even harder (1). 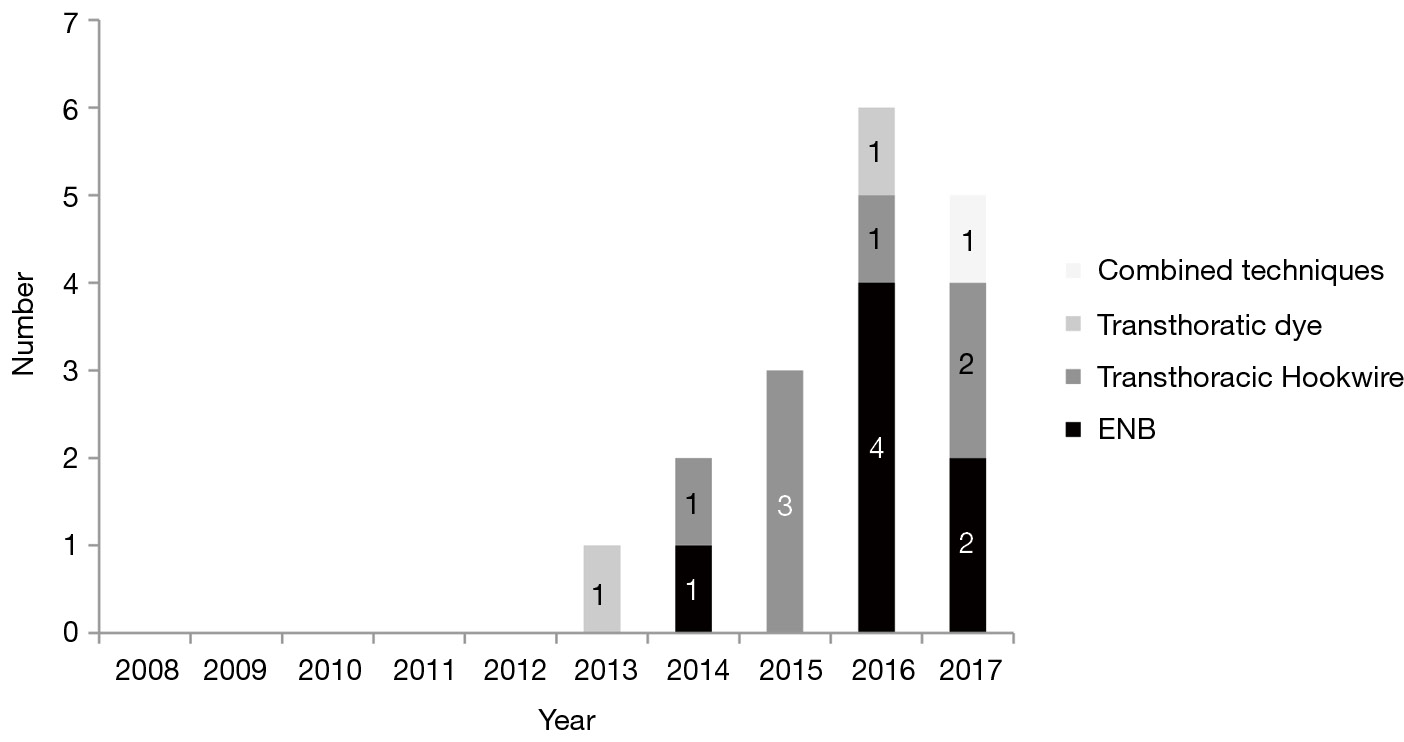 Figure 1 Number of manuscripts about hybrid procedures in thoracic surgery published in the last decade.

The efforts to integrate new real-time on-table image guidance technology have led Electromagnetic Navigational Bronchoscopy (ENB) to be considered as an essential device in the hybrid operating room. This bronchoscopic technique promises accurate navigation to peripheral pulmonary target lesions, using a virtual three-dimensional (3D) bronchial map from a preoperative chest Computed Tomography (CT) scan. Although its clinical use as a diagnostic tool is well-known for more than a decade (2,3), its application for marking peripheral pulmonary lesions with dye in the context of a hybrid procedure is relatively recent.

Based on a preoperative chest CT scan, the software SuperDimension Navigation System (Coviden, USA) creates both a virtual 3D airway tree and a navigation pathway to the pulmonary lesion. All this information is transferred to the ENB console in the hybrid operation room. Patient is positioned in decubitus supine. General anaesthesia is induced and endotracheal intubation is performed with single lumen tube. Bronchoscope is inserted up to the segmental bronchus. Once there, a locatable electromagnetic guide (LEG) is advanced following the navigational route until reaching the target. Then, the LEG is removed leaving the working channel (WC) in place. At this point, a flexible bronchoscopic needle is passed through the WC and 0.5–1 mL of methylene blue is injected directly into the lesion under fluoroscopy guidance. It has been proved that ink does not interfere in the pathology analysis of the specimen. If the pulmonary nodule is located more than 5–10 mm. from the visceral pleura, to improve visibility of the dye during the surgery dye marking can be performed at midway between the lesion and the nearest pleural surface. In these cases, pleural perforation should be avoided. Otherwise, the ink may leak out and diffuse into the pleural cavity reducing the accuracy and clarity of the marking. Pleural perforation could also cause an iatrogenic pneumothorax, especially in emphysematous patients.

Once the localization and dye marking process is finished, the single-lumen endotracheal tube is replaced with a double-lumen endotracheal tube. The patient is positioned in lateral decubitus and draping is prepared in the usual way. Thorax is approached with minimally invasive techniques, either video-assisted thoracic surgery (VATS) or robotic assisted thoracic surgery (RATS). After collapsing the lung and inserting the camera, the blue dye can be visualized over the pleural surface marking the pulmonary lesion. Sometimes, digital palpation can confirm the presence of an indurated area suggesting the pulmonary nodule. Finally the parenchyma is grasped and the pulmonary nodule is resected using endostaplers. Intraoperative frozen-section analysis is advisable in order to assess the margins and obtain diagnosis. The necessity of completing an anatomical pulmonary resection must be always considered in case of primary malignancy.

Use of ENB in a hybrid operation room: advantages and special considerations

Performing ENB marking in a hybrid room has several potential benefits. A single-stage procedure for localization and pulmonary nodule resection reduces the patient’s discomfort, facilitates the management of marking-related complications such as pneumothorax, and reduces the number of anesthetic inductions. Furthermore, Ng et al. (4) reported for first time the integrated use of cone-Beam CT (CBCT) scan and ENB in a hybrid room. CBCT scan improves the accuracy and effectiveness of ENB correcting the navigational error (4–6 mm). It is especially useful in subcentimetric pulmonary nodules when neither fluoroscopy nor endobronchial ultrasound are sensitive enough to confirm successful navigation. This technology is able to identify the malposition of the catheter providing valuable information on the direction and amount of catheter correction required to achieve success. Additionally, it allows checking the correct positioning of the catheter and dye injection needle once its trajectory has been corrected.

Prior to using the ENB system in the hybrid theatre, several considerations should be taken into account. First, a team of technicians must measure and calibrate for electromagnetic interference to ensure compatibility of the hybrid operating theatre with the ENB system. It is highly recommended to position the ENB machine in a fix place in relation to the CBCT during the procedure in order to minimize interferences. Second, during the CBCT scan, the bronchoscope position must be secured by a non-metallic mount table in order to avoid dislodgement of the needle during the period of CT scanning. Thirdly, it is advisable to disconnect the ENB electromagnetic board prior to performing the CBCT scan to avoid any interference that may reduce the CT image quality.

Six retrospective studies (5-10) have analysed the use of ENB-guided dye marking for localize pulmonary lesions before resection the operating room. Detailed information is shown in the Table 1. The sample sizes in these studies ranged between 6 and 70 patients. Most of the groups used Methylene Blue or, less frequently Carmine Indigo. Luo et al. (5) developed a novel formula containing methylene blue and fibrin sealant, which turns into a gelatinous consistency after instillation sealing it in the airway. This specific characteristic allows the surgeon not only to visualize the blue pleural surface but also keep the pulmonary segment inflated making the localization easier. The median navigation time is only reported in three studies (5,6,8) and the results are 18, 9.7 and 28 min respectively. Regarding the outcomes, four studies (5,6,8,10) achieved 100% marking success rate after ENB localization. Similar outstanding outcomes were presented by Muñoz-Largacha et al. (7) and Marino et al. (9) (79% and 97.2% respectively). Unsuccessful markings are mainly due to extravasation of dye into the pleural surface, although this inconvenience usually does not prevent the localization and resection of the pulmonary nodule. ENB-related complication rate is nearly 0%. Only one out of 24 patients (4.2%) presented an airway spasm (5). Postoperative complications were analysed in all selected studies except one (10). Reported overall complication rates ranged from 0% and 6.8%. Most common adverse events described were atelectasis, pneumonia and atrial fibrillation (6,9). Postoperative mortality rate was 0% in all series. 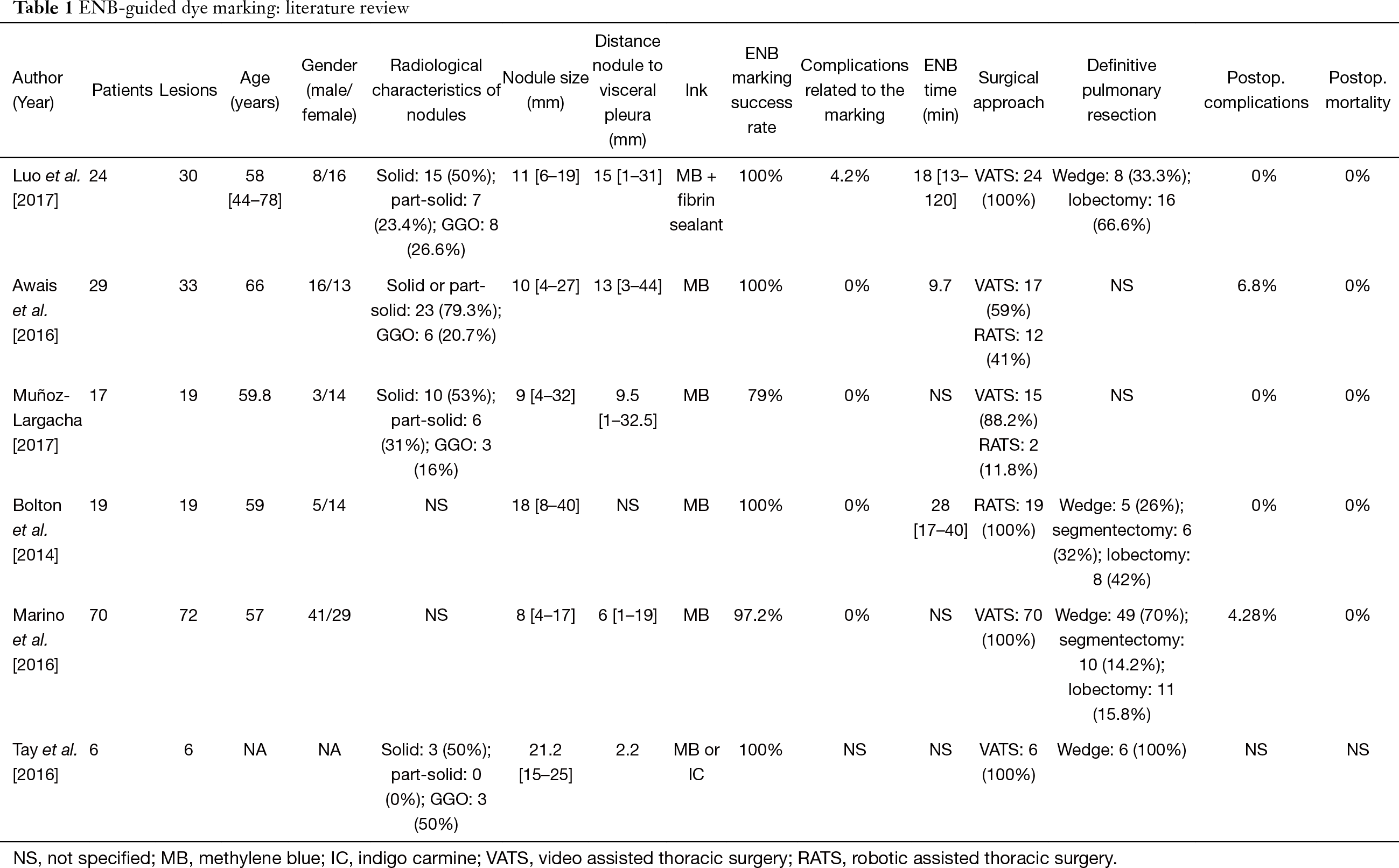 Most of these studies are retrospective and purely descriptive. Only one study (7) analyzed those variables which could influence the success rate of the ENB dye marking. Authors concluded that the larger is the nodule size and more superficial is the pulmonary lesion, the better is the success rate of ENB-guided marking, although the results were not statistically significant.

The future: where we are going

Increasing number of navigational bronchoscopy or catheter-based platforms will be available in the coming years that allow more accurate navigation to the pulmonary lesion, improving procedural efficacy and safety. Moreover, the new technologies will significantly reduce or obviate the need for fluoroscopic or CT imaging for the navigation. These user friendly platforms will help fuel the future main uses of ENB in the hybrid operating theatre which are; advance “markers” for more precise localization of lung lesions, transbronchial catheter-based ablation of lung tumour and direct chemo- or immunotherapy drug delivery to the lesion.

Smart electronic markers will soon be on the market, which may replace dye marking for lung nodule localization. These tiny radiofrequency emitting markers can be fitted into the ENB catheters for delivery into or adjacent to one or multiple lung lesions that require surgical localization. Furthermore, it may be possible to mount the radiofrequency sensors on endostaplers to not only provide the precise location of the marker, but also to inform the surgeon of the expected surgical margin from the staple line.

Neither catheter based therapy nor direct drug delivery to a tumour or pathology are new concepts. In the past, they have been performed either by the percutaneous approach or bronchoscopically but limited to access of the more proximal airways of the lungs. With navigational bronchoscopy, ablation catheters and drug delivery systems can potentially reach the more peripheral areas of the lung, potentially treating more than one lesion at the same session. Furthermore, the disadvantages and complications from percutaneous approach can be avoided, particularly when multiple lesions are targeted. Currently, the forerunners for catheter based endobronchial ablation are radiofrequency and microwave. The role of having CBCT in the hybrid theatre may shift from aiding bronchoscopic navigation to confirming successful catheter ablation or drug delivery.

In the new era of hybrid thoracic surgery, ENB is becoming one of the essential tools in the hybrid operating room. The use of ENB-guided dye marking for the localization of peripheral pulmonary nodules, either solid, part solid or GGO, followed by minimally invasive resection is a feasible and safe procedure with outstanding success rates. However, well-designed prospective randomized studies comparing an ENB-guide marking with a control group would be necessary to assess properly its accuracy and effectiveness. Furthermore, cost-effectivity studies should be performed in order to support and boost this hybrid technique.