Since 1983, more than 50,000 lung transplants have been performed worldwide (1). To date, few cases of secondary pulmonary alveolar proteinosis (PAP), as a rare complication following lung transplantation, have been reported (2-6) and the mechanism of pathogenesis is not fully clear.

A man in his 40 s was admitted to our hospital with complaints of dry cough and dyspnea on exertion in May 2008. Chest high-resolution computed tomography (HRCT) revealed peribronchovascular reticulation with lower lobe predominance. In September 2008, a surgical lung biopsy revealed a fibrosing nonspecific interstitial pneumonia pattern associated with a desquamative interstitial pneumonia-like reaction. In October 2008, prednisolone and cyclosporine were administered; however, the interstitial pneumonia gradually worsened. In October 2014, the patient underwent cadaveric left single-lung transplantation from a brain-dead donor. Mycophenolate mofetil was initiated for prevention of acute rejection. In October 2015, postoperative chest HRCT revealed centrilobular ground-glass opacities (GGOs) in the transplanted left lung (Figure 1A). The possibility of infection was eliminated based on sputum and blood culture results, serum β-D glucan and cytomegalovirus antigen testing, and the ineffectiveness of antibacterial/antifungal agents. Although methylprednisolone pulse therapy was administered due to lung transplant rejection signs such as lymphocytic bronchiolitis, imaging revealed no improvement. In February 2016, the shadow changed to a geographic GGO without crazy paving in the left lung (Figure 1B). Bronchoalveolar lavage fluid analysis revealed an opaque and milky appearance, and cytopathology demonstrated foamy alveolar macrophages and abundant granular, acellular, eosinophilic, amorphous, and periodic acid–Schiff-positive material in the background (Figure 2A), with no microorganisms. Thus, the patient was diagnosed with PAP. Serum anti-granulocyte-macrophage colony-stimulating factor antibody testing was negative. As the patient lacked respiratory symptoms, whole lung lavage (WLL) was not performed and his condition was carefully monitored while adjusting the doses of immunosuppressants. However, beginning in late March 2016, his HRCT findings gradually worsened. At this time, the patient and her family did not choose to perform WLL because of the concerns over intubation and ventilator. Aspergillus terreus was cultured from sputum, and thus, voriconazole was initiated. However, he developed acute respiratory failure and died in April 2016. Autopsy revealed PAP findings predominant in the transplanted left lung, which also had dilated lymphatic vessels (Figure 2B,C,D). Cause of death was invasive pulmonary aspergillosis. 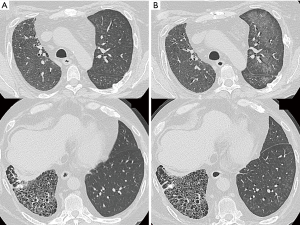 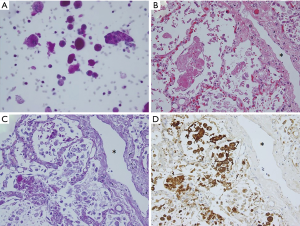 PAP occurs in three distinct forms: autoimmune, genetic, and secondary (7). In the present case, serum anti-granulocyte-macrophage colony-stimulating factor antibody test was negative. Although the possibility of genetic PAP cannot be completely excluded, no PAP was detected in the surgical lung biopsy specimen from the right lung in September 2008 or from the extracted left native lung in October 2014; PAP occurred after lung transplantation, predominantly in the transplanted lung. Thus, we diagnosed the patient with secondary PAP following lung transplantation.

The present case showed chronological changes in the secondary PAP imaging findings. Diffuse GGOs without crazy paving are common HRCT findings in patients with secondary PAP (9), as with this case. Although centrilobular GGOs, as shown primarily in this case, are atypical findings for PAP, there was a report of secondary PAP following double-lung transplantation with centrilobular GGOs (5). These findings could represent an incipient presentation of secondary PAP. However, in the present case, we did not consider the possibility of PAP in the early stage. Furthermore, methylprednisolone pulse therapy, administered due to the possibility of lung transplant rejection, might have induced further dysfunction of alveolar macrophages and subsequently worsened PAP. Thus, when centrilobular GGOs develop after lung transplantation, especially in the transplanted lung, chest physicians should take secondary PAP into consideration as an important differential diagnosis and perform bronchoscopic examination as soon as possible.

Since secondary PAP after lung transplantation is probably related to alveolar macrophage dysfunction caused by immunosuppressants, reducing immunosuppressants and/or using alternative agents have been preferred over WLL. However, the patients with secondary PAP often showed subsequent lung infections, resulting in fatal outcome. Although there have been few experiences with the efficacy or safety of WLL in lung transplant recipients, the immunomodulatory effects are expected with WLL. Thus, chest physicians need to consider WLL shortly after diagnosis of secondary PAP and/or in case of infection even if considered as non-severe initially.

Informed Consent: Written informed consent was obtained for publication of this case report and any accompanying images.