Myasthenia gravis as a prognostic marker in patients with thymoma

Thymic epithelial tumors (TET) are mainly composed of thymomas (T) and thymic carcinomas; they are the most common primary neoplasms of the anterior mediastinum. Thymomas are the most frequent mediastinal neoplasm, their frequency is about 20% of cases (1,2). Thymic carcinomas are more aggressive neoplasms and their relation with autoimmune diseases is extremely rare, due to its cytological atypia and lack of thymus like features (2). Compared with all cancers, thymomas account for less than 0.5%, with an incidence of 0.15 per 100,000 person years (3). The mean age at the time of diagnosis is 52 years, without gender predominance. TET are usually asymptomatic and are found as an incidental mediastinal mass in chest X-ray. One-third of the patients with TET have chest pain, cough or dyspnea related to tumor compression or invasion (4).

Myasthenia gravis (MG) is a rare neuromuscular disease caused by antibodies against neuromuscular junction and represents the most common paraneoplastic disease associated with thymoma (5), however, a wide range of autoimmune diseases have been reported, i.e., Cushing syndrome, pure red blood cell aplasia, rheumatoid arthritis, immunodeficiency (Good’s syndrome) and thymoma-associated multiorgan autoimmunity (6,7). Most patients with MG associated thymoma have antibodies against the postsynaptic nicotinic acetylcholine receptor (AChR) (8). Nevertheless, non-AChR muscle antibodies could also be present in more than 95% of thymoma patients, targeted mainly against striated muscle titin and ryanodine receptor (strational antibodies), and are usually associated with a severe and late-onset form of MG (9,10).

Thymomas are classified based upon their histologic appearance in five subtypes according to the World Health Organization (WHO) system: A, AB, B1, B2, B3, and thymic carcinoma cases are classified as C. Most of the data supporting treatment decisions are based on the most widely used tool for staging thymic malignancies: the Masaoka-Koga staging system (14).

The present study describes the clinical features and prognosis of the patients with TET and MG and compares them to those without MG.

At a cancer referral hospital (National Institute of Cancer, Mexico City), all the files of the patients with TET from 2006–2016 were analyzed. The database collected: demographic, clinical symptoms, oncologic history, comorbid paraneoplastic disorders, and outcome characteristics. Patients with TET and myasthenia gravis (TMG) were compared to those without myasthenia gravis (TnMG). The study was reviewed and approved by our Institutional ethics and scientific committees (INCAN/CI/837/17). Variables were compared using the chi-square or Student T tests according to the case. Prognosis was analyzed using Kaplan-Meier curves with log-rank test to identify the differences between the groups, P<0.05 was considered to be statistically significant. SPPS Statistics v.18 software (IBM Corp., Armonk, NY, USA) was used to perform the analysis.

We report 64 patients with thymoma, 35 (54.7%) were men, 29 (45.3%) were women; the most common WHO stage was B (28%). Eighteen patients (28.1%) were diagnosed with MG as seen in Table 1. We classified MG patients according to the Myasthenia Gravis Foundation of America (MGFA), and the most common stage was IIIb followed by stage I (Table 2). The mean age at the time of thymoma diagnosis was 51.4 years (range, 16–81 years) and the mean age at the time of thymectomy was 52.5 years; the mean age at the time of MG diagnosis was 49.6 years (range, 27–65 years). The mean latency of time between the diagnosis of MG and thymectomy was 8 months. All patients had biopsy proven TET; according to the treatment, 34 (53.1%) patients underwent surgery, of which, 30 (88.2%) were treated with extended transsternal thymectomy; and 3 (8.8%) were treated with partial median sternotomy thymectomy, two of them due to non resectable tumor and the last one due to hemodynamic complications during surgery. The detailed first line therapy is described in Table 3. 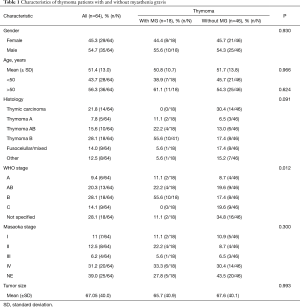 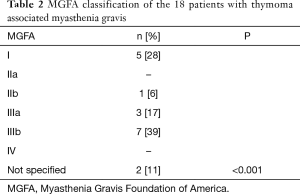 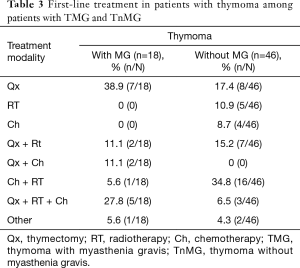 After a mean of 3-year follow-up three TMG patients died, causes of death were due to postoperative cardiac arrest and Good’s Syndrome. In the TnMG, ten patients died: five deaths were due to cardiac arrest, four due to cancer progression and one due to hypovolemic shock. Figure 1 and Table 4 shows the overall survival and the survival differences between both groups; no difference in overall survival was seen between patients with thymoma or thymic carcinoma. Clinical findings, metastases and acetylcholine receptor antibody (AChr-Ab) comparing TMG and TnMG groups, are described in Table 5. Most frequent symptoms in TMG were: diplopia 15 (83%), appendicular weakness 13 (72%), ptosis 13 (72%), dysphagia 11 (61%) and speech impairment 9 (50%), the rest of the symptoms were not statistically significant. Metastatic disease was found more frequent in TnMG (8 patients had lung, 7 bone, 4 hepatic and 1 CNS metastases). AChR-Ab was positive in 14 (78%) MG patients, and not specified in 4 (22%) patients in whom the diagnosis was made by other institutions before National Institute of Cancer admission.

Figure 1 Kaplan-Meier curves for the OS of patients among all patients and according to the diagnosis or not of myasthenia gravis. 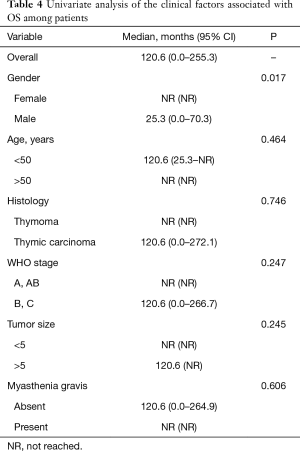 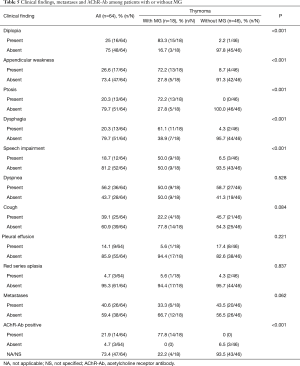 Table 5 Clinical findings, metastases and AChR-Ab among patients with or without MG
Full table

We studied 64 patients with thymoma and compared those with MG with those without MG, although clinical symptoms and autoimmune presentations were different, no difference was found in overall survival.

In our study, the age of onset, the frequency of the patients with TMG and the stage of diagnosis was consistent with the previous reports (3,4,11,18). None of our patients from the TMG group were diagnosed with thymic carcinoma, although it has been described (19,20). Nearly 90% of the patients with TMG had positive AChR-Ab, data that agrees with previous works and reports of the literature (8,12,20). In two patients with TnMG, MG was suspected and was tested for AChR-Ab: one with diplopia and appendicular weakness and the second with dysphonia; both were negative and had thymic carcinoma. To our knowledge, just a small number of authors have reported TMG without AChR-Ab (19,21). Pure red cell aplasia was found in 5% of all cases, similar to previous reports (2,4). The Good’s syndrome in patients with T has an estimated incidence of 5% (4,6), we found it in one patient with TMG and in one patient with TnMG. It has been described that patients with thymoma associated MG have a worse prognosis, and hence were likely to have a worse outcome (12,22). As expected, our patients had several clinical manifestations of MG that had statistically significant differences, these manifestations were not remitted after thymoma treatment.

The prognostic value of MG associated thymoma remains controversial in the different reports of the literature, some established the presence of MG as a good survival prognostic factor related to the onset of MG symptoms that leads a prompt approach and treatment (23-25); others reported that having MG or not, didn’t show any statistical significance, same as our results (11,26-28); and finally, some studies reported even a worse prognosis in patients with MG (17,29). This discrepancies are probably due to the wide range of clinical and pathogenic variants in MG patients, the present study has several limitations: the information was retrospectively acquired at a single institution, it includes only 64 patients and a referral bias should be considered, nevertheless, this report is valuable because in the best of our knowledge there is scarce information about MG and thymoma from Hispanic referral cancer centers; a study from 1991 had one of the largest population with MG and thymoma, and they reported a better overall survival in patients with MG compared with TnMG group (30). Since our database included patients that were detected years ago when the approach were less clearly and the patients were delayed in being referred to the appropriate specialist, most of our patients were in Masaoka stage IV, therefore, they had poor prognosis and high recurrence (13). According to the treatment 16 of TMG underwent thymectomy, one of them with partial resection; although there was a trend towards improved overall survival, this was not statistically significant in contrast to the reported by others (31).

Thymomas usually have no gender predilection (22), in our population we found an increased frequency in males, actually, after the univariate analysis we found that being male represents a prognostic factor associated with better overall survival (P=0.017).

Despite the low frequency of this disease, and given that there is still a lack of consensus on the impact of MG on overall survival, we encourage future studies to establish the optimal management and prognosis of thymoma patients and to find the best evidence.

In a group of Hispanic patients with thymoma, MG had a prevalence of 28%, although we did not find statistically significant differences in overall survival; a larger multi-centric study should be encouraged to have a better understanding of the prognostic implications of having MG in patients with thymoma. Moreover, it is recommended that all patients should be managed by a multidisciplinary team with experience in the management of TETs and with specific knowledge of the ongoing clinical trials.

Ethical Statement: The study was reviewed and approved by our Institutional ethics and scientific committees (INCAN/CI/837/17).