An 80-year-old woman was referred to our hospital with symptomatic AS, severe heart failure, and a left lower lung tumor noted on chest X-ray and computed tomography (CT) (Figure 1). The tumor was suspicious for lung cancer, but endobronchial or CT-guided biopsy could not be performed because of severe heart failure. She was also diagnosed with severe AS using transthoracic echocardiography, with an aortic valve area (AVA) of 0.6 cm2, peak velocity of 5.9 m/s, and mean trans-aortic pressure gradient (PG) of 80 mmHg.

Treatment of AS was considered before lung resection, but surgical aortic valve replacement (SAVR) was considered inappropriate because of severe frailty and a prospective perioperative mortality rate of 23.7%, calculated using the Society of Thoracic Surgery risk score (STS score). Furthermore, she had other comorbidities including marrow dysplasia syndrome, hypertension, and autoimmune hepatitis during steroid therapy. Therefore, our heart team, including a cardiologist, cardiovascular surgeon, and anesthesiologist considered her a good candidate for TAVI. TAVI was performed transfemorally using an Edwards SAPIEN 3 20-mm Transcatheter Heart Valve (Edwards Lifesciences, Irvine, California, USA) without extracorporeal circulation (Figure 2), and her heart failure improved significantly. Because she was diagnosed with primary lung adenocarcinoma, cT2aN0M0 stage IB by bronchoscopic wash cytology, video-assisted thoracoscopic Surgery (VATS) left lower lobectomy and selective lymph node dissection were performed 38 days after TAVI. She was prescribed aspirin and clopidogrel following TAVI, and a continuous heparin infusion during the perioperative period instead of dual-antiplatelet therapy, which was stopped 1 week before lung resection. She was discharged 11 days after lung resection without any complications. The pathological stage was pT1cN1M0 stage IIB, and she remains well without recurrence at 1-year follow-up. 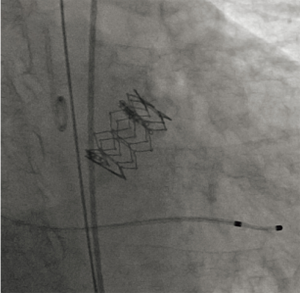 A 75-year-old man was referred to our hospital with a right lower lung nodule noted on chest X-ray and CT at another hospital (Figure 3). The nodule was diagnosed as primary lung adenocarcinoma, cT1bN0M0 stage IA2, using CT-guided needle lung biopsy. Lung resection was planned, but asymptomatic severe AS was found on echocardiography, with an AVA of 0.8 cm2, peak velocity of 5.0 m/s, and PG of 54 mmHg. Because SAVR was high risk, with an STS score of 4.3%, and because of comorbidities of paraplegia due to compression fracture and untreated renal cancer, the heart team decided to perform TAVI before lung resection. TAVI was performed transfemorally using an Edwards SAPIEN 3 23-mm Transcatheter Heart Valve without extracorporeal circulation (Figure 4); VATS right segment six resection and selective lymph node dissection were performed 44 days after TAVI. Aspirin and clopidogrel were prescribed following TAVI, and heparin was continuously infused during the perioperative period instead of dual-antiplatelet therapy, which was stopped one week before lung resection. He was discharged 10 days after lung resection without any complications. The pathological stage was pT1bN0M0 stage IA2, and he remains well without recurrence at 2-year follow-up. 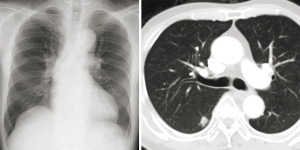 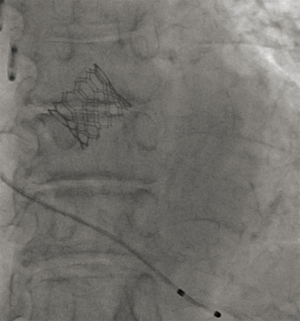 TAVI has become standard treatment for AS patients judged to be at high risk of SAVR (4). Before TAVI was introduced, SAVR was recommended prior to lung resection in high-risk patients with lung cancer and severe AS. However, some patients were considered high risk for surgical treatment of both lung cancer and AS. These patients had to decide between treatment of lung cancer with surgical resection before treatment of severe AS or non-surgical therapy including chemo-radiation therapy and best supportive care. Even if those patients underwent lung resection, MACE had a high probability of occurrence in the perioperative period. Thoracic surgery is classified in the high-risk MACE group, with a probability of >5% (1,2), and some studies reported that major cardiac complications of lung resection without cerebrovascular complications occurred in 3.3% to 3.4% of cases (3,5,6).