The aspergillus fungus is responsible for many clinical entities or a wide spectrum of pathology in the human body. Lung manifestations are quite diverse and include:

This article focuses on pulmonary aspergilloma and the surgical management thereof.

Aspergilli are saprophytes and are present worldwide. Most human infections (95%) are caused by the species aspergillus fumigatus (2).

Most pulmonary aspergillomas are found in the lung tissue. Being saprophytes, they infest a pre-existing cavity in the lung. These cavities may be the result of previous pathology including tuberculosis, healed abscesses, sarcoidosis, pneumoconiosis or cystic fibrosis (3-7).

An unusual presentation of aspergilli infection is endo-bronchial aspergilloma (1,8,9). This is simply the fungus found endo-bronchially and it may occur with or without pulmonary involvement (1).

Pleural aspergillomas are usually found in the scenario of chronic empyemas, where the suppuration produces a conducive environment for the colonisation of the aspergillus (10).

The aspergillus fungus colonizes a cavity in the lung (mostly upper lobes) (11) and forms a mass of varying size. It is also known as a fungus ball or a mycetoma. Grossly it appears as a clay ball with rough edges (Figure 1A,B).

Figure 1 Gross picture of a Mycetoma. (A) Intact specimen; (B) Cross section.

Encompassed in the conglomerate mass is fibrin, inflammatory cells and other altered blood elements (12).

It is important in the management of aspergillomas to understand the classification fashioned by Belcher and Plummer (13,14) as it has important clinical ramifications.

They divided pulmonary aspergillomas into simple and complex types.

The disease process is much more aggressive and diffuse. There is much more destruction of the lung parenchyma than a simple cavity. In most instances, the adjacent pleura is also involved in the pathology. The aspergillus fungus has merely colonised this unhealthy destroyed tissue. The lung and pleural pathology is usually due to pre-existing disease processes (most commonly tuberculosis) (3,17) (Figure 4A-D). These patients are not uncommonly sicker and may even have reduced pulmonary function tests. Cavities are usually thick walled due to repeated infections. There may also be more widespread lung pathology in other lobes of the lung and even bilateral disease. 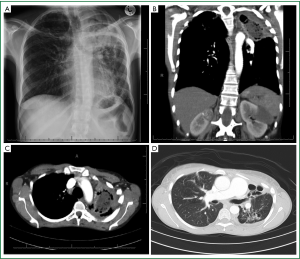 The aspergillus fungus is commonly found in sputum cultures (11). They invade the lung through the respiratory tract and colonize the pre-existing cavity which has a direct communication to a bronchiole (18). There may be tissue invasion of the lung causing the more invasive and aggressive forms of pulmonary aspergillosis or a chronic necrotizing form (19).

The most common preceding lung lesion is an open healed TB cavity. The incidence of cavitatory TB being affected by aspergilloma formation is 11-17% (3,20). Other conditions include sarcoidosis, abscesses, cysts, bronchiectasis, cavitatory tumours and bullae (3,18,21,22).

It is also reported that aspergillomas may develop in healthy lungs, whereby the aspergilli fungi secrete a digestive enzyme in the surrounding lung to create a space for its colonisation (2,23).

Aspergilli can proliferate and easily colonize a cavity as phagocytosis is hindered in cavities found in the lung.

Aspergillomas can be extremely variable in its course, ranging from undergoing spontaneous lysis (7-10%) to causing severe haemoptysis (22,26,27).

Up to 30% of patients with minor haemoptysis may go on to develop life-threatening haemoptysis (28).

It is also reported that the severity of haemoptysis is not related to the size, the number of aspergillomas nor to the underlying lung disease, erythrocyte sedimentation rate, eosinophil count or to the response to skin prick tests (29).

Jewkes et al. reported a recurrence of aspergillomas post-surgery to be in the region of 7% (29,30).

This can be diverse ranging from patients being asymptomatic to experiencing life-threatening haemoptysis.

Most patients present with a productive cough containing either mucus, pus or blood (2). Dyspnoea is usually due to primary lung disease (3,31).

Most series report haemoptysis as being the most common symptom with an incidence of around 80% (21,32).

The likelihood of massive haemoptysis in a patient with an aspergilloma is unpredictable, in part because of the lack of prospective data about the natural history of the condition.

The size, complexity of the aspergilloma or a sentinel bleed cannot predict if patients will progress to massive haemoptysis (11).

The radiological signs are variable and classically the mycetoma is surrounded by a crescent of air in the cavity, but this really depends on how large the aspergilloma is within the cavity. The walls of the cavity can be either thin or thick walled.

The radiological appearance of an aspergilloma forms a differential diagnosis of a “ball-in-a-hole” which also includes lung abscesses, cavitatory carcinomas, and ruptured hydatid cysts, to name a few.

When the cavity is much larger than the aspergilloma, it is seen to be mobile and it assumes different positions in the cavity depending on positional change of the patient. This change of position is gravity dependent.

Additional pleural and lung parenchymal changes dictate whether the aspergilloma is of a simple or complex type.

The treatment for aspergillomas remains controversial and there is no consensus amongst the treating physicians. This is mainly because of the variability of the underlying lung disease process. The optimal treatment strategy is unknown.

The medical management of aspergillomas has a complementary role and has been fairly disappointing, although there are still ongoing investigations into its role (11).

Anti-fungal agents, whether systemic or intra-cavitatory have showed no consistent success.

Likewise bronchial artery embolization appears to be a temporary measure and vascular collaterals tend to develop quite soon after embolization.

There is also no consensus regarding the timing of surgery and the type of surgery needed.

Many earlier reports showed a high mortality and morbidity rate (60%) (13,14,26,34-36) after surgical intervention for aspergilloma. This has obviously influenced the bias towards a more conservative and medical management of this condition.

Newer studies from the year 2000 onwards show much more favourable results with surgical intervention. Akbari et al. showed an operative mortality of 3.3% and a 33.3% morbidity (13,37).

Lee et al. (13) recommended surgery for all patients with an aspergilloma and having adequate pulmonary reserve, even if asymptomatic.

Since the current risk of surgery is less than the risk of a massive bleed, the scale seems to be tilting towards early surgical intervention on suitable candidates diagnosed with an aspergilloma. This however positions the role of surgical timing to be debatable (Table 1) (13,22,34,39).

The predicament arises in patients with unsuitable lung function precluding any pulmonary resection. In these cases, one has to carefully balance the risk benefit ratio and in this subset of patients, the more conservative operative procedures come to the fore. These surgical interventions are offered to prevent massive and disastrous haemoptysis from occurring.

Usually reserved for simple aspergilloma that is small and either peripheral (wedge) or lies locally within a segment (segmentectomy).

Since a simple aspergilloma is a relatively benign disease and if the whole aspergilloma can be removed by lesser resections, then lung conserving surgery can be undertaken.

These operations are usually reserved for a large simple aspergilloma occupying almost the whole lobe or for complex aspergillomas. It is undesirable to leave diseased lung behind if the patient can functionally tolerate anatomical lung resection.

The same principles are adhered to as for the resection of inflammatory diseased lung. The usual precautions when attending this pathology must be applied and respected. Most morbidities and mortalities of case series arise from operating upon complex aspergillomas and many surgeons have been humbled by complications. Some reasons for these complexities include: obliterated pleural space, very stuck hilum and mediastinal surface, increased collateral circulation and patients that are nutritionally disadvantaged.

This type of procedure is reserved for high risk patients with complex aspergillomas, namely patients who functionally would not be able to tolerate anatomical resection. Whether this operation can be extended to other patients, namely those with good lung functions and simple aspergillomas, is still contentious and is in need of more evidence. At present anatomical resection remains the gold standard.

The goal of this operation is to remove the culprit lesion namely the aspergilloma, close off the communicating bronchioles, collapse down the cavity (via an apicolysis) and perform a limited thoracoplasty to obliterate the resultant space.

It must be stated that this operation is much less tedious than anatomical resections.

It is based on the assumption that the ongoing haemoptysis is most likely due to the aspergilloma and hence this procedure is concentrated only on removing the inciting lesion (aspergilloma) and leaving the rest of the diseased lung in situ.

The steps for an apical lung aspergilloma are:

This procedure is a modification of that reported by Daly et al. (40,41), wherein a myoplasty was done. Others have described atrophy of the muscles used, due to inactivity (42,43). Some authors have recommended a 2-stage procedure but we recommend it be done in a single setting (40).

A complementary thoracoplasty is advocated to obliterate the space resulting from collapsing of the cavity. This allows one to refrain from the arduous task of freeing the remainder of the lung in the hope that it will fill the space (3). A thoracoplasty may not be required if the aspergilloma is not located apically.

This operation has to be tailored according to size and location of the aspergilloma.

If a symptomatic patient has bilateral disease, then it is advisable to perform a bronchoscopy to confirm the site of bleeding, before performing surgery.

If patients are deemed non-surgical candidates, even with the slightest of surgical interventions, then conservative medical treatment has to be adopted.

Surgery for inflammatory lung disease is fraught with morbidity and mortality, hence the earlier, more dated opinion of being conservative with patients having aspergillomas.

Daly et al. (41) reported a mortality of 25% and morbidity (including excessive bleeding, residual pleural space, broncho-pleural fistulae and empyema) up to 60%.

Aspergilloma is a result of a saprophytic infection of a diseased lung. The course and prognosis of this subset of patients cannot be predicted with certainty.

There are many surgical options, but one has to carefully choose and tailor the procedure according to the functional stability of the patient (28) (Figure 5).