A case of maoto-induced interstitial pneumonia

Maoto (Ma Huang Tang in Chinese) is composed of four medical herbs (Ephedrae Herba, Cinnamomi Cortex, Armeniacae Semen and Glycyrrhizae Radix) and is traditionally prescribed for acute febrile diseases or upper respiratory tract infections (1,2). Clinical studies have shown that maoto improves flu symptoms with efficacy comparable to that of neuraminidase inhibitors in adults infected with the influenza A virus (3). Furthermore, maoto has shown clinical efficacy for seasonal influenza without severe adverse effects in randomized controlled trials (4). It is therefore considered a safe and efficient traditional drug for patients with flu like symptoms and is thus prescribed widely in eastern Asia. We herein demonstrate a case of maoto-induced interstitial pneumonia mimicking acute exacerbation of idiopathic pulmonary fibrosis (IPF). To our knowledge, no case reports of maoto-induced interstitial pneumonia have been published.

A 64-year-old man was admitted our hospital due to progressive dyspnea. The patient had been diagnosed with unstable angina and treated with coronary stent placement at 45 years of age. Six days earlier, he had developed a high fever and been prescribed maoto for acute febrile disease at a nearby hospital. Because of his persistent high fever, chest computed tomography was performed two days later. High resolution computed tomography revealed diffuse ground-glass opacity mainly around bronchovascular bundles with interlobular wall thickening and basal reticulation with honeycombing (Figure 1A). He was suspected of having atypical pneumonia based on IPF and was treated with a single oral dose of 2 g azithromycin and daily injection of 600 mg pazufloxacin. Four days later, his fever gradually subsided. However, the dyspnea with hypoxemia worsened, so he was transferred to our hospital, emergently. 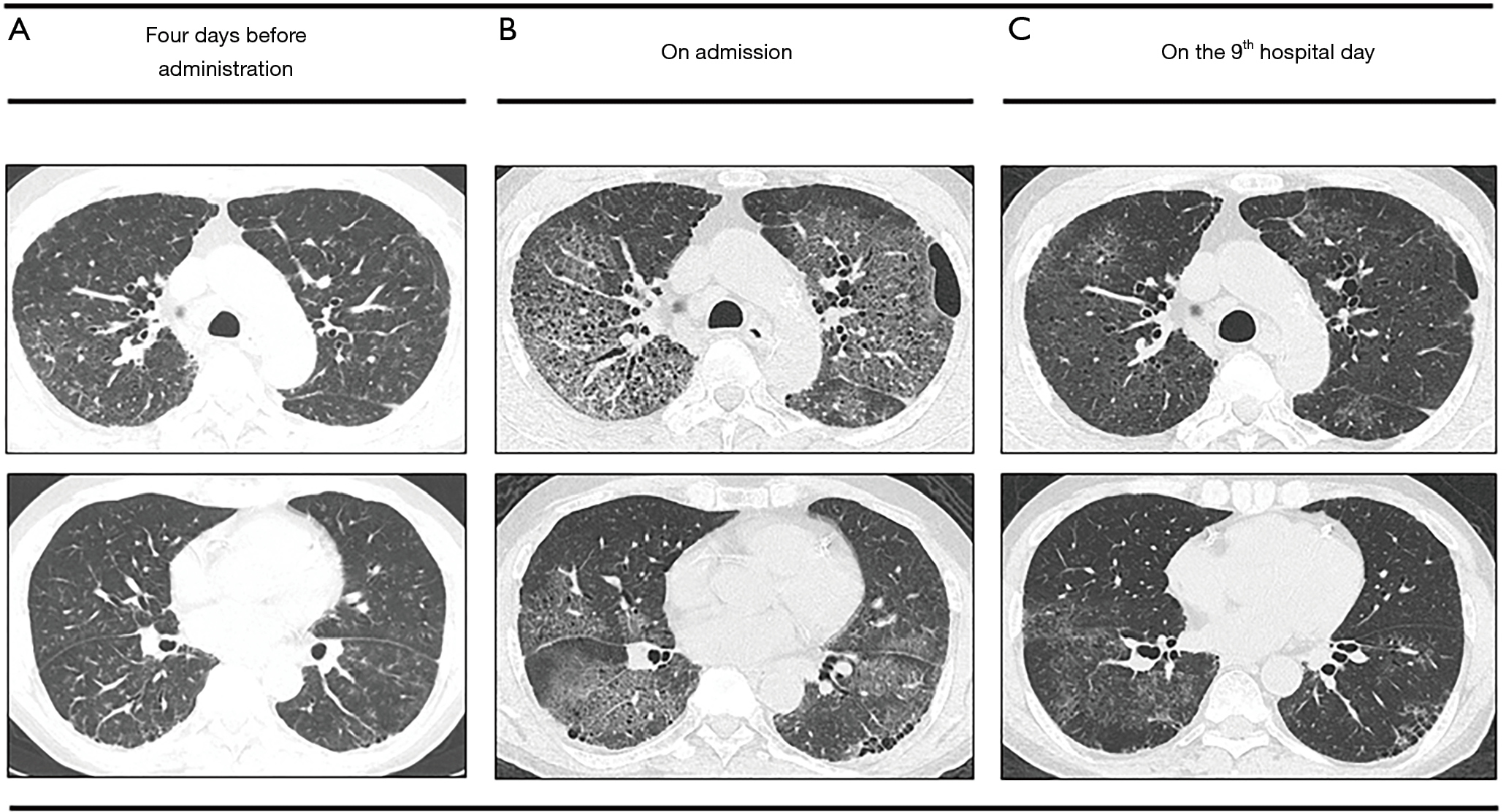 At admission, his body temperature was 36.6 °C, blood pressure 159/88 mmHg, pulse 93 beats/min, and respiration rate 30 breaths/min. Chest auscultation revealed fine crackles. The cardiac examination findings were normal. In addition, no skin rash was noted. High-resolution computed tomography (HRCT) showed diffuse ground glass opacities with predominantly upper lobe involvement, with the lesions more severe than previously noted on HRCT (Figure 1B). The results of laboratory tests indicated mild anemia (3.21×106/µL red blood cells, 9.0 g/dL hemoglobin), decreased total protein (6.23 g/dL) and albumin (2.90 g/dL), elevated AST (69.3 IU/L), ALT (44.6 IU/L), ALP (560.0 UI/L), γ-GDP (153.7 IU/L) of, LDH (413 IU/L) and CRP (17.36). The serum KL-6 level (429 U/mL) was within the normal range. An echocardiogram revealed a normal ejection fraction. An arterial blood gas analysis revealed a pH of 7.46, PaO2 of 71 mmHg and PaCO2 of 32 mmHg of at a flow rate of 4 L/min with a nasal mask. Autoantibodies and anti-nuclear antibodies were not detected and the antibody titers of anti-virus (influenza A, B, adeno, RS, parainfluenza I, II), Mycoplasma and Chlamydia pneumoniae were all below the detection limit. The single titer for parainfluenza III virus was 1:320. The anti-Legionella pneumophila antibody in serum as well as Cytomegalovirus antigenemia (C7-HRP) in blood was negative. Cytological evaluation of collected bronchoalveolar lavage (BALF) specimens (13 mL/150 mL, 8.7%) revealed 45.0% macrophages, 37.4% lymphocytes, 16.3% neutrophils and 1.3% eosinophils. The results of a Pneumocystis jirovecii polymerase chain reaction in the BALF were negative. Culture of the BALF showed no bacterial, mycobacterial and fungal growth.

After 4 days of treatment, pazufloxacin was replaced with 500 mg of levofloxacin injection per day for six consecutive days because of his injection pain. On the 5th hospital day, an arterial blood gas analysis revealed a PaO2 of 91 mmHg on room air, so the oxygen supply support was stopped. On the 9th hospital day, the CRP level decreased to 1.01 mg/dL, and the extensive infiltrations on HRCT was generally reduced (Figure 1C). A four-fold or greater increase in the antibody titers in paired serum samples was not found in any of the above viruses, Mycoplasma or Chlamydia pneumoniae. Because his pulmonary symptoms spontaneously improved, the cause of the symptoms was deemed unlikely to have been acute exacerbation of IPF, congestive heart failure or pulmonary infections. Acute respiratory distress syndrome due to infection, acute exacerbation of IPF and congestive heart failure were also inconsistent with this benign clinical course. Therefore, drug-induced interstitial pneumonitis was suspected. The diffuse ground-glass opacities had been already apparent on HRCT initially performed by the nearby hospital, so the suspected drugs were nicorandil and trimebutine maleate, which had been administered for 2 weeks, and maoto, which had been administered for 2 days prior to HRCT. A drug-induced lymphocyte test (DLST) against maoto demonstrated a positive result, and the scratch test was positive as well, although the patch test was negative. In contrast, the results of the DLST, patch test and scratch test against nicorandil and trimebutine maleate were all negative. We therefore confirmed a diagnosis of maoto-induced interstitial pneumonia. The pulmonary insufficiency has not recurred since the cessation of maoto, although a honeycombing pattern on the chest CT has become apparent.

In the present case, HRCT demonstrated diffuse ground-glass shadows superimposed on a background of findings consistent with the usual interstitial pneumonia pattern, so the acute exacerbation of IPF was suspected, while viral infection, atypical pneumonia, aspiration and drug toxicity were considered as differential diagnoses. However, a ≥4-fold increase in the antibody titers between admission and the 14th hospital day has never been reported with any of the above viruses, namely Mycoplasma and Chlamydia pneumonia, it was therefore difficult to diagnose the present case to have viral or atypical pneumonia. The patient’s respiratory symptoms, hypoxemia and HRCT findings improved, and the elevated levels of liver transaminases were restored by drug cessation without corticosteroid treatment, strongly suggesting that drug-induced interstitial pneumonitis. We therefore confirmed maoto as the drug that most likely was responsible for the pulmonary insufficiency. This is the first report of drug-induced interstitial pneumonia due to maoto, a prevailing herbal drugs in eastern Asia.

Herbal medicine using various herbal ingredients is traditionally used in Japanese clinical practice to treat a wide range of diseases and symptoms, such as allergies, infectious diseases, a postoperative decreased bowel function, and prolonged cough. Recently, the number of reports of herbal medicine induced pneumonitis has increased, especially in Japan. According to a review of Japanese herbal medicine-induced pneumonitis, sho-saiko-to was the most frequent causal drug (26%), followed by sairei-to (16%), seishin-renshi-in (8%), and bofu-tsusyo-san (8%) and particular Japanese herbal medicine/ingredients (namely sho-saiko-to, sairei-to, ougon, and kanzo) were also found to increase the risk of drug-induced interstitial lung disease (DILD), considerably (5). These drugs commonly contain ougon (Scutellariae Radix) and kanzo (Glycyrrhizae Radix). Interestingly, kanzo (Glycyrrhizae Radix) is involved in Maoto. However, a DLST unexpectedly demonstrated a positive result against semen armeniacae amarum but not kanzo (Glycyrrhizae Radix) in the present case. We find it difficult to believe that there have been no cases of maoto—induced pulmonary pneumonitis despite maoto being commonly prescribed in eastern Asia. Some subclinical patients may develop interstitial pneumonitis after exposure to maoto with clinicians unaware of their slight respiratory symptoms and therefore not performing a complete check-up including HRCT.

The diagnostic protocols of DILD are controversial. A provocation test with the suspected drug is the most reliable method of evaluating the relationship between the drug and pneumonitis. However, drug hypersensitivity reactions can be occasionally life-threatening and false-negative results on provocation test can occur due to the loss of sensitization, rare cofactors not included in the diagnostic procedure, and tolerance induction during provocation (6). A DLST is an in vitro method for diagnosing drug hypersensitivity (7,8) and is widely used for the diagnosis of DILDs. Nyfeler and Pichler, and Kano et al. concluded that DLST was a reliable method to support the diagnosis of a drug allergy (9,10), whereas the results of DLST were not consistent with the results of provocation tests in any of the cases (11). Therefore, DILDs are usually diagnosed based on exclusion. Suggested diagnostic criteria are as follows: (I) a history of drug exposure; (II) clinical, radiographic and histopathological characteristics are compatible with previous findings of the identical drug; (III) other pulmonary diseases excluded; (IV) improvement after cessation of the suspected drugs; and (V) recurrence of ILD after rechallenge (12,13). However, this standard criterion is not useful if drug toxicity of the lung has not been previously reported. Clinicians therefore must rely on the results of DLSTs, patch tests and scratch tests when there have been no case reports of a relationship between the suspicious drug and ILDs.

After 5 years, he suffered from dyspnea on exertion and chest HRCT revealed lower-field-dominant extensive honeycombing formation, while a pulmonary function test showed a restrictive pattern (FVC 77.8%, FEV1% 95.7%). Given the chest HRCT pattern and his clinical course, he was confirmed to have IPF. At the time of admission, acute exacerbation of IPF was considered in the present patients because (I) he had experienced acute worsening of dyspnea; (II) HRCT demonstrated diffuse ground-glass opacity superimposed on focal honeycomb patterns at peripheral lung fields; and (III) cardiac failure and fluid overload were denied. According to the revised definition and diagnostic criteria for acute exacerbation of IPF, this case fulfilled the diagnosis of triggered acute exacerbation (14). We must differentiate acute exacerbation from DILD superimposed on IPF, such as in our case, because his respiratory symptoms, hypoxia and diffuse ground-glass opacity were ameliorated by drug cessation alone. More than 70% of the patients presenting with herbal drug-induced interstitial pneumonia required oxygen supplementation while approximately one-third (36%) recovered from the events after simply discontinuing the causative drugs (5). For diagnosing DILD superimposed on IPF, the observation of the effects of cessation of the causative drugs without treatment by corticosteroids or immunosuppressants may be helpful during the disease course of acute/subacute IPF if the patient’s condition is not emergent.

Informed Consent: Written informed consent was obtained from the patients for publication of this manuscript and accompanying images