Ochronosis of the aortic valve

This case report is of a man with symptomatic aortic stenosis who was found to have ochronosis of his aortic valve upon pathological examination. This rare condition is a feature of alkaptonuria, an inherited disorder where the amino acids phenylalanine and tyrosine are not correctly processed. It can be characterised by bluish-black discolouration of connective tissue. There is limited data on ochronosis involving the aortic valve, especially with regards to the choice of valve for replacement and its natural history. However, there are studies to suggest prevalence of aortic valve replacement (AVR) due to alkaptonuria increases with age. This case report highlights the rare nature of ochronosis and discusses the condition.

A 72-year-old male with symptomatic aortic stenosis was referred for surgical evaluation for an AVR. The man complained of dyspnoea, angina and episodes of syncope. A transthoracic echocardiogram revealed severe trileaflet aortic stenosis with a valve area of 0.91 cm2, peak gradient of 82 mmHg and a mean gradient of 50 mmHg. His ejection fraction was relatively well preserved at 65%. His past medical history included hypertension, dyslipidemia, vertebral and knee surgery for symptomatic osteoarthritis and gastro-oesophageal reflux disease having required oesophageal dilation. On physical examination, he was 180 cm tall, weighed 81 kg with a body surface area of 2.11 m2 and a blood pressure reading of 140/75 mmHg. A pre-operative coronary angiogram was carried out and showed minor coronary artery calcification.

The patient underwent successful AVR. Intraoperative aortic cannulation of the patient was routine and uncomplicated, with a cross-clamp time of less than 1 hour. Macroscopic examination of the aortic valve revealed a trileaflet aortic valve measuring 28×15×8, 25×18×7 and 26×13×8 mm3 in maximum aggregate dimensions, with bluish-black discolouration of the valve and annulus, along with significant calcification and stenosis. Intraoperative inspection revealed a normal appearing aorta, subannular apparatus, pericardium, myocardium and sternum. A thorough decalcification was performed and a 25 mm Perimount Magna-Ease valve (Edwards Lifesciences, CA, USA) was implanted in the supra-annular position. Extubation and post-operative recovery of the patient was unremarkable and the patient was sent home within a week. The diseased valve leaflets were sent for histopathology which is routine for our cardiothoracic unit. Several irregular fragments of the valve leaflets were identified which were studded with calcific nodules and atheromatous plaques measuring 8×5×4 mm3 (Figure 1). 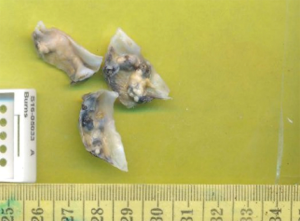 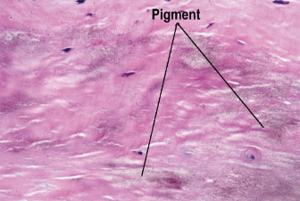 Figure 2 Microscopic pathology. View of a section of valvular leaflet showing pigment deposition seen consistent with diagnosis of ochronosis (the staining was positive for pigment deposition, the scale of the image is 1:1).

Alkaptonuria is a rare autosomal recessive metabolic disorder estimated to affect between 1 in 250,000 and 1 in 1,000,000 of the general population (1). The genetic predisposition has been mapped to chromosome 3q21-23 with more than 80 mutations identified (1,2). Common features of alkaptonuria include homogentisic acid (HGA) in the urine assayed with chromatography, ochronosis (bluish-black pigmentation of connective tissue), joint and spine arthropathy. Patients may also have calculi (renal, prostatic, gallbladder and salivary), tendinopathy, osteopenia and fractures. Males have been shown to have a higher predisposition to earlier onset and more severe symptoms of arthritis compared to females (3). Our patient suffered from arthritis affecting his knee and vertebral column which could have been attributed to alkaptonuria. Interestingly, he had reached 72 years of age without being diagnosed with the condition, suggesting onset can be later than previously suggested.

Prevalence of AVR due to alkaptonuria has been found to increase with age (4). Ochronosis associated valvular disease usually occurs in the 5th decade of life allowing time for the pigment to accumulate in valvular tissue (4). Ochronotic pigment in the aortic valve may stimulate progressive dystrophic calcification and fibrosis, leading to stenosis (5), as seen in our patient.

Currently there is no proven treatment for this disorder, although nitisinone, a potent inhibitor of the second enzyme in the tyrosine pathway has demonstrated significant reduction of plasma HGA levels (4). Dietary restriction of tyrosine and phenylalanine is often recommended but does not significantly change the progression of the disease. Reports have suggested that biological valve prosthesis may be exposed to the same process of HGA deposition and calcification as is native valve tissue, thus adversely affecting prosthesis longevity (6). Unfortunately, the recurrence rate of ochronosis in bioprosthetic valves is yet to be reported, along with limited data on the most appropriate type of valvular replacement in such patients.

We described a rare occurrence of ochronosis of the aortic valve in an elderly male patient with severe aortic stenosis, which is not a typical idiopathic calcification, but a foreign body reaction to the embedded pigments causing inflammation contributing to further calcification of connective tissue. Despite previous back and knee surgery, the diagnosis of ochronosis was made during AVR and demonstrates the insidious nature of this disorder. While it is certain that the ochronosis leads to progressive calcification and stenosis of the valve, it remains to be seen whether this process would accelerate the process of aortic stenosis. There is limited available data regarding choice of valve prosthesis in this ochronosis and a bioprosthetic valve was used in our patient in accordance to his age and preference. Whether alkaptonuria additionally accelerates bioprosthetic valve degeneration is also yet to be ascertained. Further research will help us better understand the natural history of aortic valve ochronosis and its rate of recurrence following bioprosthetic AVR.

Informed Consent: Only verbal consent was obtained from the patient. The patient was made aware of his condition and that his case would be presented as a case report.