Surgery for hemoptysis in patients with benign lung disease

Hemoptysis is a life-threatening disease; thus, proper treatment should be conducted immediately. Depending on the severity of hemoptysis, etiology, clinical features, and/or vital signs, various approaches can be applied, including conservative medical treatment, endobronchial control method, bronchial artery embolization (BAE), and surgery (1,2). Given its technical advances, easy accessibility, and low treatment-associated morbidity and mortality, BAE has recently been widely used as the first treatment of choice. However, the therapeutic effect of BAE is transient, and a number of studies report disease recurrence rates as high as 10–55% (3). Consequently, surgery plays a major role in controlling the symptoms of hemoptysis permanently by eradicating the lesions associated with the underlying disease. Although high morbidity and mortality rates were problematic in the past, there has been recent improvement in postoperative results in light of advances in surgical techniques and enhanced perioperative care (4,5). We investigated cases at Chonnam National University Hwasun Hospital in which surgical lung resection was performed to treat hemoptysis due to a benign lung disease and subsequently analyzed factors influencing the postoperative outcome.

This retrospective study was reviewed and approved by the Institutional Review Board of the Chonnam National University Hwasun Hospital (IRB approved No. CNUHH-2018-063). We retrospectively analyzed the medical records of 94 patients who underwent pulmonary resection performed due to various benign lung diseases from 2010 to 2016. We excluded patients who underwent surgery for hemoptysis caused by a lung malignancy. When a patient with hemoptysis was admitted to the hospital, a pulmonologist provided the primary diagnosis and confirmed whether the symptoms could be controlled by non-surgical treatment. Patients with hemoglobin levels less than 10 g/dL received blood transfusions with packed red blood cells.

Basic laboratory tests, chest X-rays, and computed tomography (CT) were conducted in all preoperative patients, and in cases where localization of the hemoptysis-associated lesion was difficult by CT, the lobe that was the focus of the hemoptysis was confirmed by flexible bronchoscopy.

Surgery was performed in patients with persistent or recurrent hemoptysis that could not be controlled by non-surgical treatment and in whom the lesions could be anatomically localized and confirmed by CT or bronchoscopy. The specific volume of hemoptysis was not used to select patients in need of surgery. To evaluate the possibility of general anesthesia and single lung ventilation intraoperatively, we conducted arterial blood gas analysis and pulmonary function test when possible. Keeping in mind the clinical status of the patient, elective surgery was first considered, and an emergency operation was performed in patients with active bleeding causing life-threatening hemodynamic instability and respiratory impairment.

Surgery was performed based on the guidelines that video-assisted thoracoscopic surgery (VATS) should be used when possible and the lesions should be completely eradicated through lesser (sublobar) parenchymal resection. Further, surgery proceeded when a possibility for VATS was confirmed by exploration using an 11-mm thoracoscopic port. In cases where it was difficult to establish a surgical field using a thoracoscope because of diffuse dense pleural adhesions or preoperative aspiration, or where single lung ventilation could not be tolerated, we decisively switched to or conducted posterolateral thoracotomy. Surgery was immediately performed by thoracotomy when a prominent adhesion was detected on CT or the extent of resection was expected to exceed that of a lobectomy. Tissue specimens were definitively diagnosed by pathology and microbiology tests postoperatively, and data were categorized based on these results.

When there was no air leak in the chest tube that was used postoperatively and the drainage amount was less than 200 mL/day, the tube was removed, and hospital discharge was considered.

Table 1 reports preoperative baseline characteristics. The average age of all 94 patients was 58.2±11.1 years, and the ratio between men and women was 1:1. The underlying lung diseases identified based on postoperative pathology results included aspergilloma in 58 cases (61.7%), bronchiectasis in 10 cases (10.6%), and tuberculosis in 7 cases (7.4%). The lesions were localized in the right lung in a slight predominance of cases (56.4%) and were more frequently found in the upper lobe (61.7%) than in the middle and lower lobes. In 33 patients (35.1%), blood transfusion was required preoperatively; patients received an average of 1.27 units of packed red blood cells. A history of preoperative BAE was identified in 22.3% of cases. 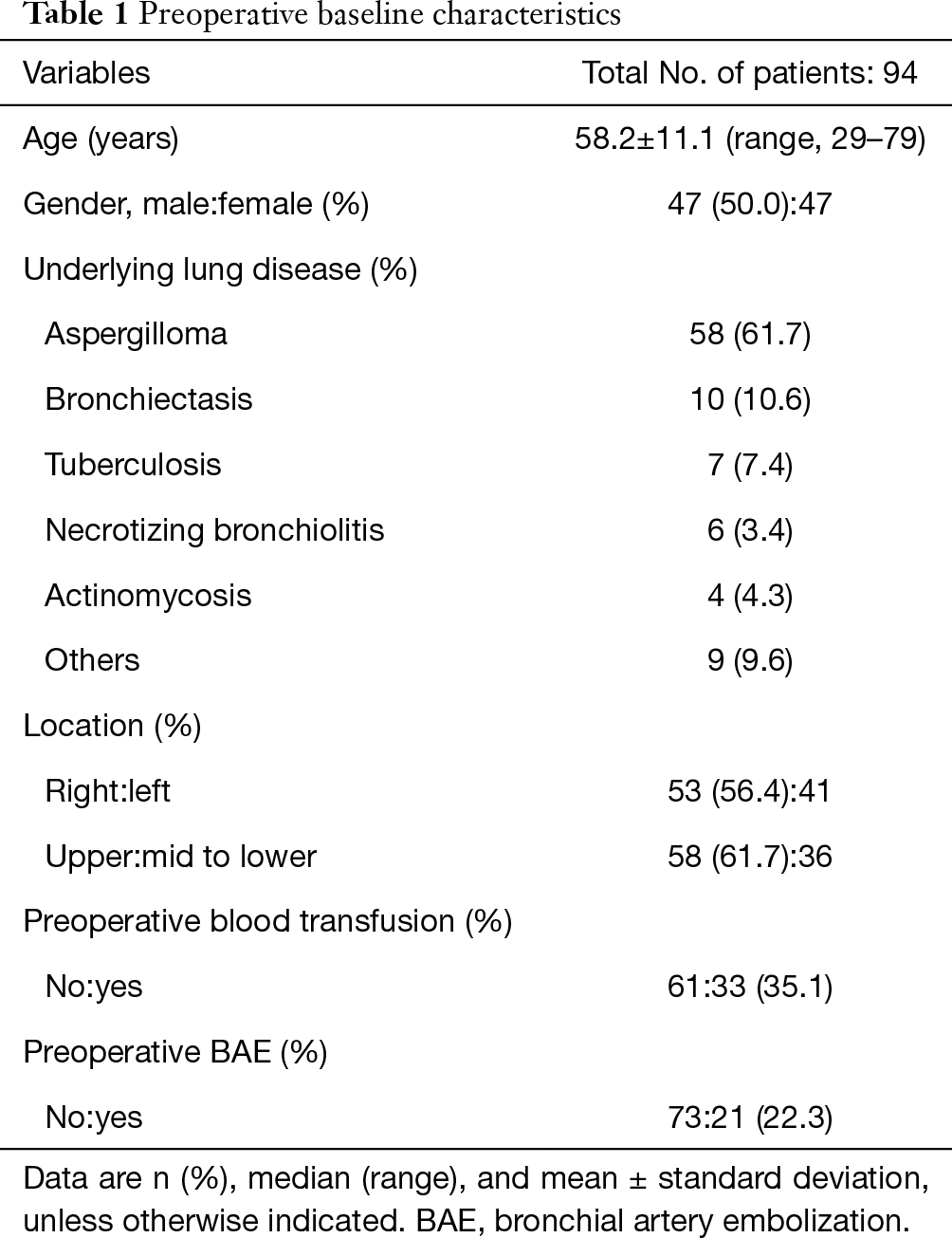 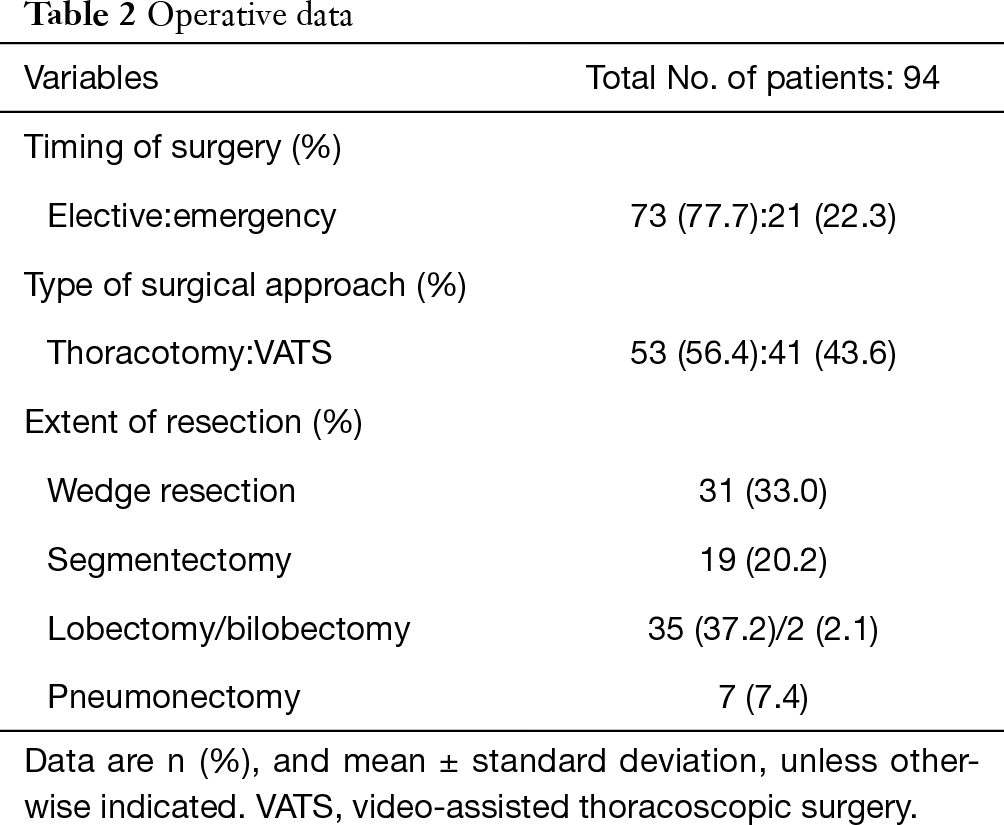 Table 3 reports postoperative outcomes. The average hospitalization period was 10.7±8.5 days, and postoperative complications occurred in 23 cases (24.5%). A prolonged air leak of 7 days or more was the most prevalent complication, observed in 13 cases. Respiratory failure and pneumonia developed in 4 and 3 patients, respectively, and 6 of these patients required mechanical ventilation in the intensive care unit. Reoperation was performed in 2 cases due to postoperative bleeding. In-hospital mortality occurred in 3 cases (3.2%), all of which involved open thoracotomy. In 2 of these cases, segmentectomy and lobectomy were performed, respectively; the remaining case was treated with pneumonectomy. All 3 patients died while receiving ventilator treatment for pneumonia. 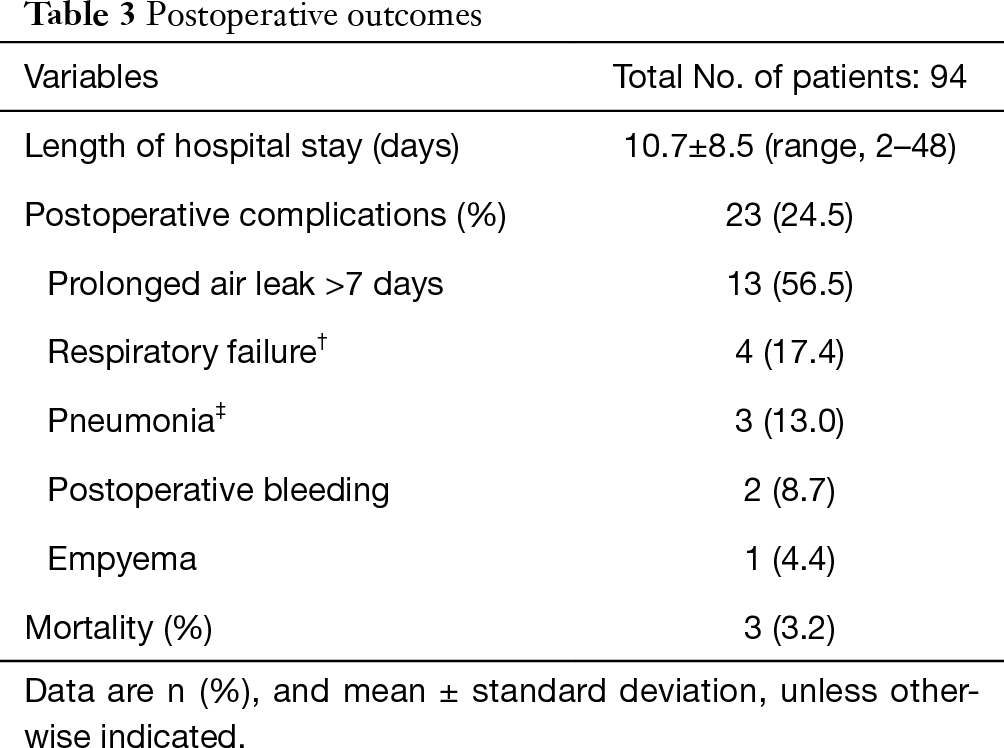 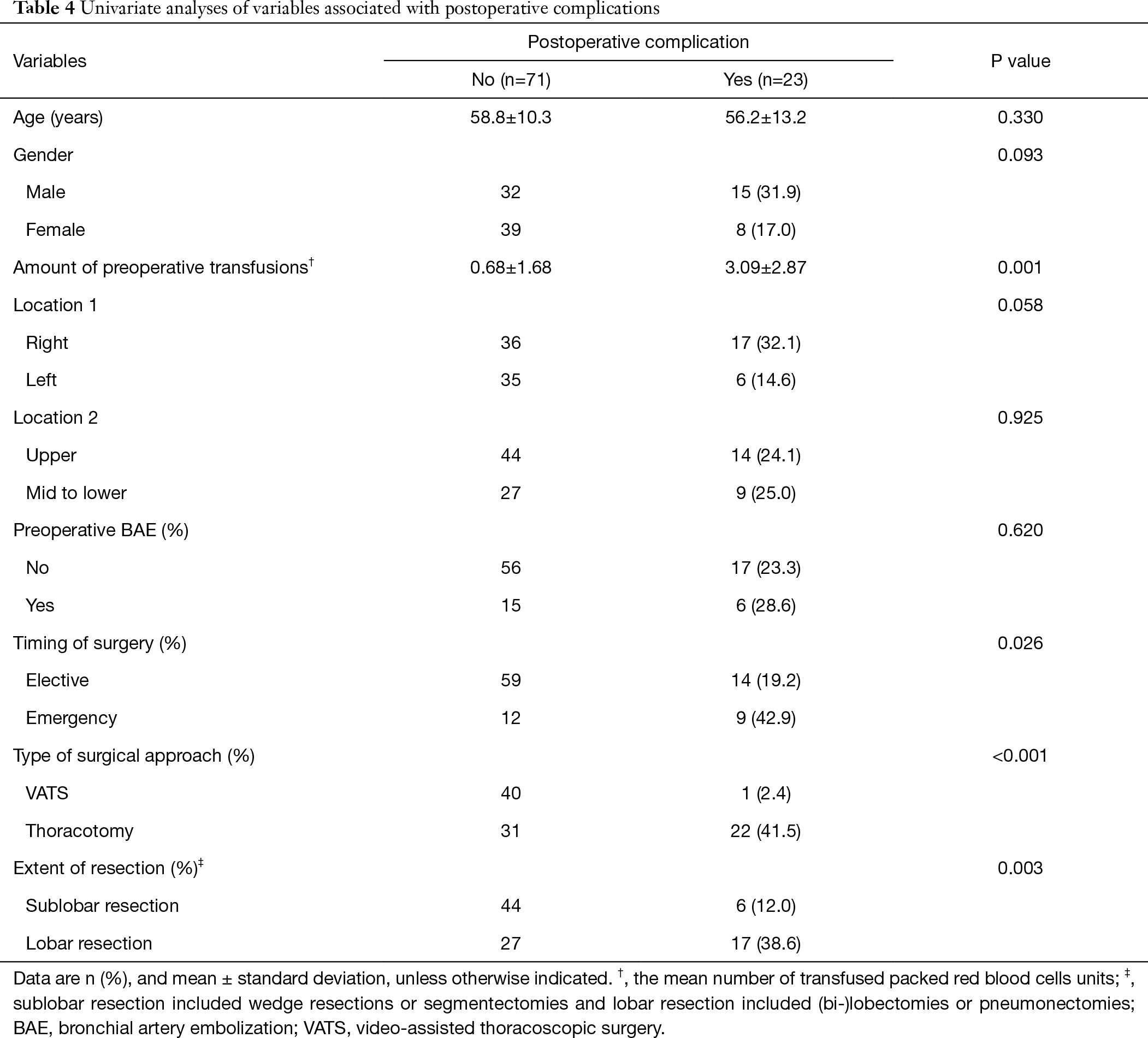 Hemoptysis is a life-threatening disorder that requires prompt and appropriate treatment. The hemoptysis-associated mortality rate has been reported to be 25–50% (6,7). Hemoptysis is categorized according to the origin of bleeding, the size of blood vessels (small or large), or the type of artery involved (bronchial or pulmonary) (8,9). Underlying diseases are of various types and can be infectious, neoplastic, cardiovascular, or congenital, and their distribution varies depending on geographical regions. In the United States, analysis of the 2013 National Inpatient Sample database indicates that the most prevalent hemoptysis-associated diagnoses were respiratory tract neoplasm (13.0%), bacterial disease (5.8%), and bronchiectasis (3.2%) (10). These results are consistent with the etiology of hemoptysis that was reported by Hirshberg et al. from a tertiary referral hospital in the late 1990s (11). However, in Asia, the major underlying diseases of hemoptysis that require treatment are inflammatory benign diseases, including tuberculosis and aspergilloma (12).

The clinical features of hemoptysis can vary from minor blood-tinged sputum to massive hemoptysis. While hemoptysis is categorized as minor, major, and massive hemoptysis according to the daily amount of hemorrhage, it is difficult to define precise cut-off values for these categories since “massive” can mean any value between 100 and 1,000 mL/day, depending on individual authors (8,13). However, rather than using a specific volume, it is important to determine the severity of hemoptysis and develop a treatment plan based on the clinical features and vital signs of the patient. The patient’s vital signs can be relatively stable with adequate expectoration of secretions even though the amount of hemoptysis is significant. Conversely, a patient can show unstable vital signs and suffer from a poor quality of life because of persistent and recurrent hemoptysis despite the low degree of hemoptysis.

In cases of massive hemoptysis, or hemodynamic or respiratory impairment, aggressive treatment should be considered. Treatment options can range from conservative medical treatment to invasive surgical treatment, and a proper approach or flow chart has been reported depending on disease or hemoptysis severity (9,14). BAE is the first choice of treatment because of its accessibility and low rate of treatment-associated complications. Since its first use by Remy et al. in 1973, new embolic materials have been developed, and based on the accumulation of experience in interventional radiology, many cases with improved outcomes have recently been reported (15-18). However, one factor in BAE that needs to be considered from a therapeutic point of view is the control rate or recurrence rate. In 2000, Kato et al. reported the long-term results of BAE for hemoptysis due to benign disease, indicating that the long-term cumulative hemoptysis non-recurrence rates after the initial embolization were 77.7% for 1 year and 62.5% for 5 years (19). According to the findings reported 12 years later by Anuradha et al., the control rate of hemoptysis via BAE was 51% at 1 year and 39% at 2 years (20). The results of our study also show that 22.3% of patients had recurrent hemoptysis and underwent surgery despite having a history of treatment by BAE. In light of these data, in a report on the treatment outcomes of emergency lung resection for massive hemoptysis, Alexander stated that BAE is probably best utilized as a temporizing measure in patients unsuitable for emergency lung resection (21). Ultimately, for the purpose of permanent and curative treatment of hemoptysis, surgery is the ideal option. While surgery was generally avoided as a treatment option in the past due to the relatively high morbidity and mortality rates, the recognition of various risk factors, use of VATS, and it significant evolution and refinement over time have resulted in improved surgical outcomes. The most well-recognized risk factors are the timing of surgery and the extent of resection. Patients who undergo emergency surgery or pneumonectomy have an increased risk. Metin et al. reported in 2005 that emergency pulmonary resection was characterized by acceptable morbidity (27.5%) and mortality (11.5%) rates as an effective treatment option for massive hemoptysis (22). However, numerous studies demonstrated that the morbidity and mortality rates associated with emergency surgery were higher than those associated with elective (planned) surgery (23), which is consistent with the findings of our study. Kiral et al. demonstrated that in patients requiring emergency surgery, the pulmonary reserve is usually compromised due to aspiration, and resection which can be extensive, is performed during active bleeding (24). Pneumonectomy has become a less desirable surgical method as a treatment option even for lung cancer, given its high risk, and has been reported to result in higher morbidity and mortality rates compared to lobar or lesser resections (10,23,24). Brik et al. identified lobectomy as the most frequently used method (51.1%) in a report on surgical treatment for hemoptysis caused by various pulmonary tuberculosis lesions and suggested that limited resection should be avoided to prevent recurrence (25). Although the recurrence rate and long-term results were not analyzed in our study, prognosis is expected to improve in cases where lesions are completely eradicated by sublobar resection, resulting in a decreased morbidity rate. As VATS has been adopted worldwide and indications for its use and the accumulation of relevant experience have been gradually increasing, it has been frequently applied for the treatment of inflammatory lung diseases. Application of VATS has recently been reported in various cases of pulmonary aspergilloma and tuberculosis, which represent underlying causes of hemoptysis, and the postoperative outcomes are comparable to those of open surgery with respect to safety and efficacy (26-29). It was further confirmed in this study that the only risk factor for postoperative complications was the performance of thoracotomy. While it should be noted that the rates of sublobar resection (VATS versus thoracotomy; 87.8% vs. 26.4%) and elective surgery (VATS versus thoracotomy; 87.8% vs. 69.8%) were higher in the VATS patient group, the results of the multivariate analysis are meaningful, given the known benefits of VATS. Further, although there are potential limitations associated with inflammatory lung diseases such as adhesions and anthracotic lymph nodes, we believe that VATS can be effectively applied for the treatment of inflammatory lung diseases based on the accumulated knowledge and experience.

The limitations of this study include the use of a retrospective approach and the potential selection bias in choosing surgical approaches and the extent of resection for hemoptysis. In addition, the severity of hemoptysis was not numerically categorized and evaluated.

In conclusion, surgical resection for hemoptysis in patients with benign lung diseases is an effective and established treatment option. This report demonstrates acceptable morbidity and mortality rates associated with surgery, and further investigation is required to investigate long-term results. Primarily, the extent of surgical resection, surgical approach, and timing need to be appropriately selected according to the severity of hemoptysis, underlying diseases, and clinical features. However, when complete resection is possible and can be tolerated by the patient’s clinical status, we recommend elective (planned) sublobar resection through VATS to improve the postoperative outcome.

Ethical Statement: This retrospective study was reviewed and approved by the Institutional Review Board of the Chonnam National University Hwasun Hospital (IRB approved No. CNUHH-2018-063).