Many people hold deep-seated beliefs surrounding home remedies for hiccups and often assume their method of choice will be equally effective for someone else despite a lack of supporting evidence (1). Rather than dismiss these remedies outright, as scientists, we instead embrace the challenge to reveal the underlying physiological mechanisms.

According to the results of our experiments employing our plastic bag rebreathing method, we have reported that the time hiccups stop must be when CO2 levels in both expiratory gas (EtCO2) and inspiratory gas (InspCO2) reach approximately 50 mmHg (2). In addition, using the findings, we elicited that the CO2 level in arterial blood (PaCO2) should simultaneously reach approximately 50 mmHg at the time hiccups stop; however, there was only supportive data to imply our conjecture regarding PaCO2 in the former report (2).

We conducted another experiment to further investigate what actually happens to blood CO2 levels during plastic bag rebreathing. Using the results, we will discuss the physiological meanings behind reactions in the experiment, spotlighting the correlation between mimicking choking and stopping hiccups.

The study protocol was examined and approved by our Research Review Board (No. 17-0310, approved on March 10, 2017). An extension of the study period to the end of March 2019 was approved on April 3, 2018. Written consent was obtained from the volunteer prior to this experiment.

We enlisted a 55-year-old healthy male 1.87 m in height and weighing 77 kg as a volunteer for the experiment. An arterial line (A-line) was taken on his left wrist, and 1,500 units of heparin sodium was injected from the line. He held a CO2 sensor in his mouth to measure both EtCO2 and InspCO2, and a 20 L clear plastic bag (520 mm × 600 mm) filled with air was placed over his head with an airtight seal around the neck. We attached a pulse oximeter on his left toe to measure SpO2 and instructed him to rebreathe into the plastic bag for as long as possible. EtCO2, InspCO2, and SpO2 levels were continuously measured until the end of the experiment. Arterial blood and venous blood were simultaneously taken at the following four points: P0, when the plastic bag rebreathing started; P1, when both EtCO2 and InspCO2 showed the same value; P2, when both reached 50 mmHg; and P3, when SpO2 decreased to 90%. Arterial blood was taken through the A-line by a doctor, and venous blood was taken from his right arm by a nurse. These blood samples were quickly analyzed using a blood gas analyzer (ABL735; Radiometer, Tokyo, Japan) (3). The measuring instruments for EtCO2, InspCO2 and SpO2 were an EtCO2 meter (Microstream™; Medtronic, Minneapolis, USA) and a multi-monitoring system (DS-8200; FUKUDA DENSHI, Tokyo, Japan) (4,5).

InspCO2 sharply increased from P0 to P1 and then lost speed after reaching the same level as EtCO2, both slowly continuing to rise (Figure 1). EtCO2 was almost plateaued from P0 to P1, but then began to gradually increase along with InspCO2. 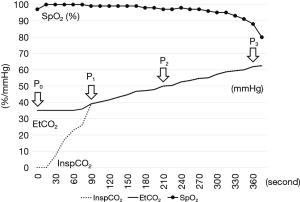 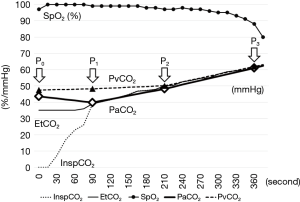 Since hiccups are usually self-limiting, they are harmless for most people. However, in rare cases hiccups can become severe, such as patients with cancer undergoing chemotherapy; about 4–10% of cancer patients on chemotherapy (another research group has reported it was about 40% of them) suffer from severe chronic hiccups (6-8). Hiccups that continue beyond 48 hours are considered persistent, and episodes longer than 2 months are termed intractable (1). A problem for patients with persistent hiccups is that not only home remedies, but medical interventions are also often ineffective (1,7,8). From this point of view, evidence that our plastic bag rebreathing method consistently cured a number of patients with persistent hiccups could offer clues behind the mechanisms at work (2).

P1 and P2 are of significant physiological importance in our experiment. P1 is the point at which not only InspCO2 reached the same value as EtCO2, but the point at which PaCO2 reached almost the same value as well; namely, InspCO2 = EtCO2 = PaCO2. We think this phenomenon represents the moment that the concentration of CO2 in the air inside the bag reaches the same value as PaCO2; no longer is there a pressure gradient between arterial blood and lung air. After P1, once CO2 is expelled from the lung into the air inside the bag through expiratory gas, the same volume of CO2 begins infiltrating arterial blood through inspiratory gas. We can deduce that the duration from P0 to P1 depends on the size of plastic bag: the smaller plastic bag, the shorter the duration. And if no plastic bag is employed (as in the case of holding one’s breath), the period is theoretically very short. The plastic bag thus works to supplement lung capacity in our rebreathing method.

P2 is the point that PaCO2 reached almost the same value as PvCO2; namely, InspCO2 = EtCO2 = PaCO2 = PvCO2 = approximately 50 mmHg. This phenomenon means that the concentration of CO2 in the entire bloodstream is equalized. After P2, there is no longer a CO2 pressure gradient between PvCO2 and PaCO2 [Δ(PvCO2 − PaCO2) =0 mmHg], and CO2 accumulates in the body without being discharged. However, a sufficient amount of O2 still remains in the air and blood until P3.

What does P2 mean physiologically? Originally, P2 was considered the point at which hiccups stopped. But the experiment revealed that P2 also represents the point at which Δ(PvCO2 − PaCO2) became 0 mmHg. The period between P2 and P3, the dangerous point at which SpO2 began sharply dropping, must then represent what the brain feels is the last chance to escape from the situation in order to survive. During this period the brain must emit intense signals to take in fresh air before suffocation occurs.

Before answering the question, an important correlation should be made between the medulla and the phenomenon of human hiccups (10). It is believed that the epicenter of hiccup production is located in the medulla, and although its exact location is still unknown, there are a number of supporting reports that medullary tumors caused persistent hiccups (1,10-13). If the hiccup epicenter is located inside the medulla, this means that when the hiccup epicenter emits rogue signals the medulla automatically responds. The medulla’s response is misinterpreted by the body as normal orders from the medulla, which implies that the cerebellum does not control hiccups.

According to our experiments, hiccups should always stop around P2, at which point the brain must send off a strong alarm for survival. The conditions around P2 are similar to the above underwater scenario. If the medulla only yielded respiration control to the cerebellum but continued to function, the hiccup epicenter would also remain active. On the contrary, if the medulla became completely incapacitated, the hiccup epicenter inside the medulla would also be switched off. Therefore, the answer to the question regarding the power balance between the cerebellum and the medulla in a crisis is that the medulla weakens. In its weakened state, signals from the autonomic nervous system would no longer interfere with orders from the cerebellum. We believe hiccups will stop if we are able to create a situation that tricks the medulla into thinking it is faced with a crisis, as seen at P2. The medulla including the hiccup epicenter and primitive functions of respiration control will be strongly suppressed.

There are countless home remedies for hiccups in the world (1,13); in Japan, it is believed that hiccups will stop when the person is startled. Many of them sound unreliable or unscientific, but after our experiments, we have come to realize that some remedies (such as holding one’s breath) may have some supporting evidence behind them. Although other physiological pathways to stop hiccups may exist, in theory hiccups could be immediately resolved if human lung capacity was sufficient enough to allow PaCO2 and PvCO2 to reach approximately 50 mmHg [and Δ(PvCO2 − PaCO2) =0 mmHg] while holding one’s breath. Although physical restrictions render this method impossible for most people, the same result can be achieved by supplementing lung capacity with an airtight plastic bag. But it is important that the balance of power between the cerebellum and the medulla is drastically altered.

We believe the simple conclusion is that hiccups will always be resolved when functions of the medulla drastically weaken, such as when facing a crisis. It is our hope that these findings could be the catalyst to exploring a new horizon in human physiology.

Ethical Statement: The study protocol was examined and approved by our Research Review Board (No. 17-0310, approved on March 10, 2017). Written consent was obtained from the volunteer prior to this experiment.