Minimally-invasive thoracic surgery has been in use for many years. In this field, video-assisted thoracoscopic surgery (VATS) is the most commonly used technique. Non-intubated VATS, i.e., thoracoscopic surgery without endotracheal intubation, is a new approach to this technique of minimally invasive surgery (1). Conventionally, VATS is performed under tracheal intubation with a double lumen tube or bronchial blocker used to achieve one-lung ventilation. Although tracheal intubation with one-lung ventilation is widely accepted as the standard of care in thoracic surgery, potential complications related to intubation are not negligible.

Non-intubated VATS is performed by maintaining spontaneous ventilation without general anesthesia, but with sedation. One-lung spontaneous ventilation (open pneumothorax) is more physiological and therefore has more advantages than one-lung mechanical ventilation (2,3). The adverse effects of intubated general anesthesia include: intubation-related complications, ventilator-induced lung injury, impaired cardiac performance, and postoperative nausea and vomiting (1,4-6). By avoiding complications of intubation, mechanical ventilation, and muscle relaxants, non-intubated VATS can reduce the incidence of these adverse effects. However, open pneumothorax in a non-intubated patient may compromise ventilation and oxygenation. Moreover, movements of the patient during surgery, coughing, mediastinal shift and diaphragmatic displacement may make surgery technically difficult.

Over the last decade, non-intubated VATS has undergone evaluation and been demonstrated to be feasible and safe for the management of a variety of thoracic diseases. In 2004, Pompeo et al. proved it was possible, through the use of epidural anesthesia, to perform thoracic surgery in the awake patient (7). In 2007, Al-Abdullatief et al. showed it was possible to perform some cases of major thoracic surgery (open thoracotomy and lung volume reduction surgery) with the patient awake or minimally sedated (8). The technique of non-intubated VATS lobectomy was reported in 2011 by Chen et al. (9). As cases have accumulated and the technique has developed, most thoracic surgery can now be undertaken using it (10-12).

A single surgeon performed non-intubated VATS from August 2016 in Seoul St. Mary’s Hospital in Korea. The procedure was performed in all consecutive patients there who underwent thoracoscopic surgery, provided they did not meet the following exclusion criteria: body mass index (BMI) >30, expected difficult airway, expected extensive pleural adhesion, prior pulmonary resection, severe cardiopulmonary dysfunction, persistent cough or excessive airway secretion, high risk of gastric reflux, and underlying neurological disorder (Table 1). Over 1 year, at our institution, 115 patients underwent non-intubated VATS. These 115 consecutive patients were reviewed retrospectively. Clinical characteristics and surgical outcomes were analyzed and risk factors for conversion to intubation were identified. This study was approved by the Institutional Review Board of Seoul St. Mary’s Hospital. 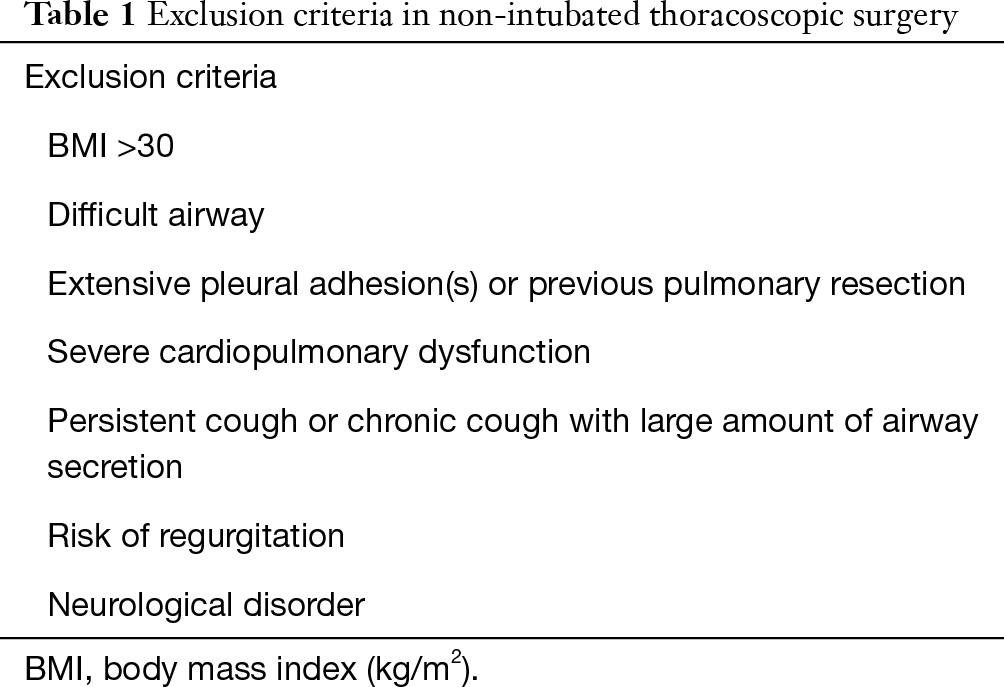 The anesthetic techniques used included sedation and locoregional analgesia. Standard monitoring with end-tidal CO2 and arterial blood pressure was commenced before sedation. Bispectral index (BIS) monitoring was used for evaluation of sedation level. Oxygenation was facilitated when necessary with O2 supplementation by facial mask. For sedation, propofol and/or dexmedetomidine was used with target-controlled infusion, and the target BIS was set at 40 to 60. Adjuvant administration of fentanyl, midazolam, and ketamine was used when necessary.

After administration of sedative agents, the patients were positioned in a lateral decubitus position. Before surgical incision, locoregional analgesia was performed by local injection using mixed 2% lidocaine and 0.5% bupivacaine in 1:1 ratio. Before surgical incision, the local anesthesia was applied from the skin to the parietal pleura. Usually, skin incision was stated at working port site. For pulmonary resection, 4th intercostal space was used for working incision. After opening the parietal pleura, the lung was collapsed by iatrogenic pneumothorax. Then, thoracoscopic-guided intra-thoracic intercostal nerve block was performed in the space beneath the lower margin of each rib from 3rd to 9th (Figure 1). When performing anatomical resection, local anesthesia was also applied to the right paratracheal area or left subaortic area where the vagus nerve passes (Figure 2). Where necessary, intraoperative cough reflex was effectively inhibited with intrathoracic vagal blockade on the surgical side. The surgical procedure was similar to conventional VATS. When open pneumothorax is induced, the lung collapses similar to one-lung ventilation. Significant respiratory movement during the operation, leading to movement of the patient, could cause difficulties, but most cases could be completed without conversion to intubation.

Clinical characteristics and surgical outcomes are described below. Multivariate logistic regression was used to analyze the risk factors for conversion to intubation in all patients. All variables with a P<0.1 in the univariate analysis were entered into a multivariate analysis. A P value <0.05 was considered statistically significant. Statistical analyses were performed using SPSS 24.0 software (IBM Corp, Armonk, NY, USA).

During 1 year, 194 patients underwent VATS conducted by single surgeon. Of those patients, 115 cases (59.3%) were non-intubated VATS. Clinical characteristics of all 115 patients are described in Table 2. The mean age of all patients was 61.8 years, and mean BMI was 23.8. Of the 115 patients, 83 (72.2%) were lung cancers undergoing pulmonary resection. The other 32 (27.8%) patients were diagnosed with pulmonary metastasis, benign lung diseases or pleural diseases, thymic tumor or other conditions. In all, 77 patients (67.0%) underwent VATS lobectomy.

Surgical outcomes of all patients

Table 3 shows the surgical outcomes of all patients who underwent non-intubated VATS. Most patients received multi-level intercostal nerve block (96.5%) and vagus nerve block (90.4%). The mean anesthesia time was 172.4 (±54.7) min. The mean operative duration was 130.0 (±53.1) min. The mean postoperative chest tube duration was 3.9 (±4.8) days, and the mean postoperative hospital stay was 6.0 (±3.3) days. There were 9 conversions (7.8%) to intubation and 3 conversions to open thoracotomy. There were 16 complications (13.9%) among the patients: 8 with prolonged air leakage, 2 with chylothorax, 2 with arrhythmia, and 4 with pulmonary complications. All of the complications were managed successfully during the hospital stay period. There was no postoperative mortality. 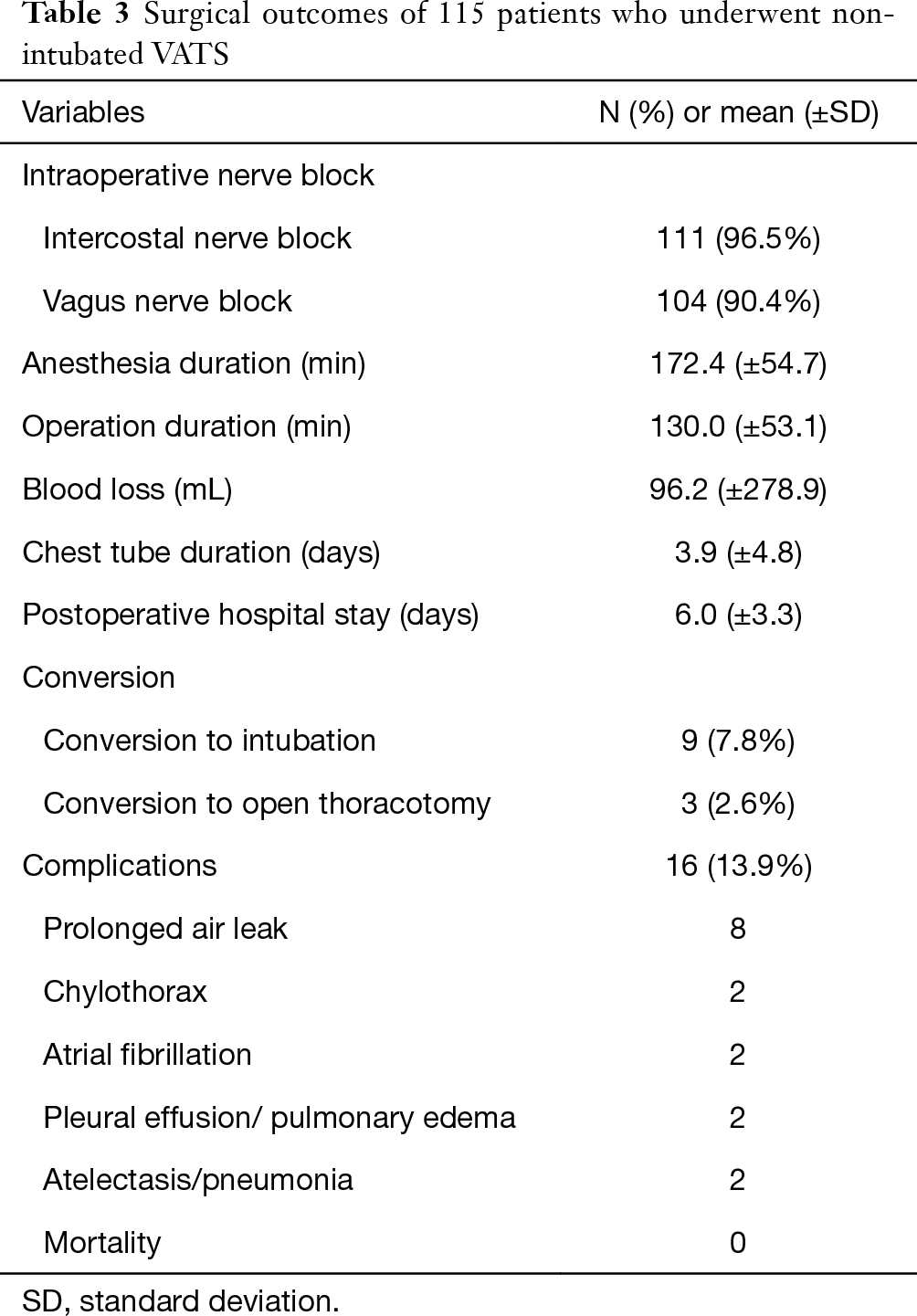 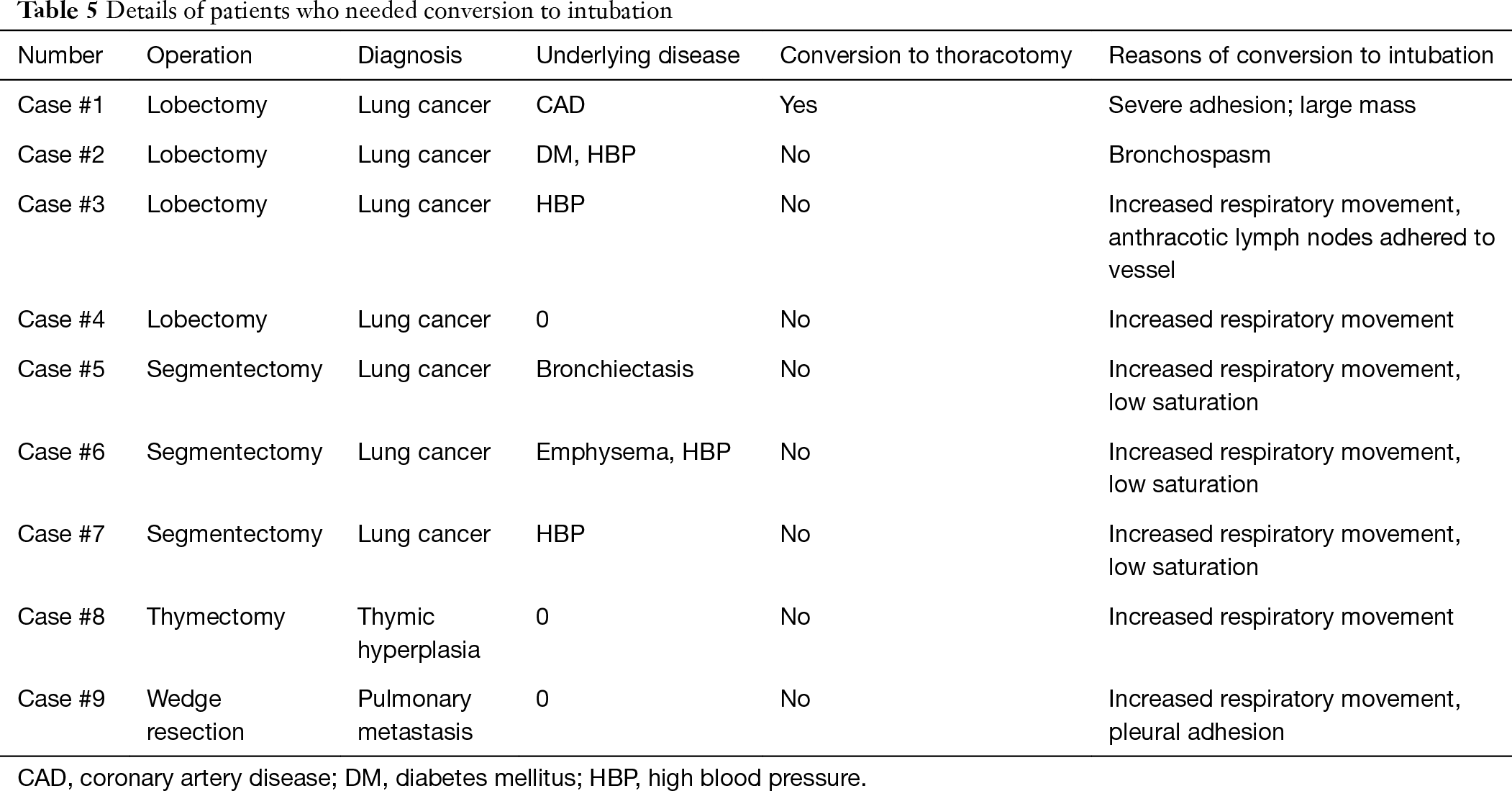 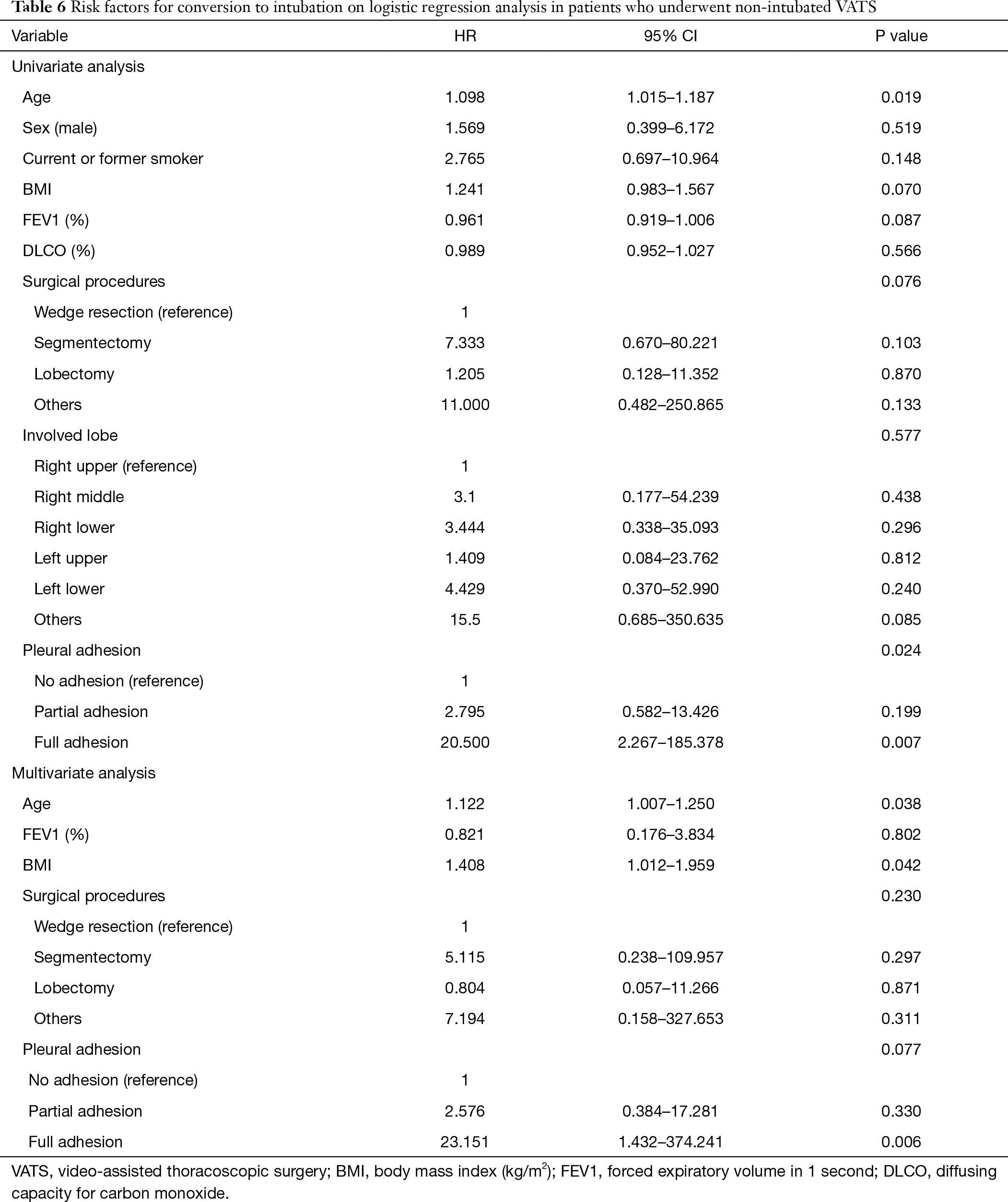 Despite this being our initial experience with it, we found that non-intubated thoracoscopic surgery could be undertaken without much difficulty. Our surgeon was a highly experienced operator in conventional VATS and, from the first attempt, was able to successfully perform non-intubated VATS lobectomy. However, collaboration with anesthesiologists was essential for success; anesthesiologists experienced in thoracic surgery were the most helpful. The anesthesiologist monitored the patient closely while maintaining sedation. When the conversion to intubation was needed, intubation could be performed by the anesthesiologist without a position change using a laryngoscope with a video scope. There were a total of 9 (7.8%) conversions to intubation, which could be performed without any difficulty in the way mentioned above.

Conversion rates are reported to be 5–10% in most studies, and our conversion rate (7.8%) was within this range (1). The most common reason for conversion to intubation during surgery was the presence of significant diaphragm movement due to hypoxemia and hypercapnia (seen in 7 patients of a total of 9 conversions). Obesity is clearly related with increased respiratory movement during non-intubated surgery; therefore, in other centers with experience in non-intubated VATS, a BMI greater than 30 is considered a contraindication to non-intubated VATS. From the beginning, we too considered BMI to be one of the most important patient selection criteria. In our study, the mean BMI of conversion-to-intubation patients was 25.5, which was greater than the mean BMI of non-conversion patients. As well as BMI, in multivariate analysis, old age was a significant factor for conversion to intubation. The mean age of conversion to intubation patients was 72 years. We believe that if a patient is selected with a stricter application of BMI and age to the exclusion criteria currently in use, the conversion rate would be reduced further and non-intubated VATS would be performed more safely. Of course, in the future, the development of surgical and anesthetic techniques will hopefully expand the indications for non-intubated VATS.

Conventionally, locoregional analgesia has been achieved by epidural anesthesia. Epidural anesthesia has the advantage of continuously injecting a local analgesic drug, and it can help pain control by maintaining the catheter even after surgery. However, the procedure is difficult and can lead to complications such as spinal cord injury (17). By contrast, thoracoscopic guided intercostal nerve block is easier to perform and there are no complications. In addition, bupivacaine used for local analgesia has a sustained effect of 3 hours. Most thoracic surgery can be completed within 3 hours, hence intercostal nerve block and vagal block are only needed once, in most thoracic surgery. Of course, local anesthesia can be applied repeatedly for long-lasting surgery.

This study had several limitations that should be considered. Firstly, we used a retrospective study design. Secondly, we obtained the data from a single institution and the number of cases was relatively small. However, this study was intended to show how successfully a surgeon skilled in conventional VATS can successfully undertake non-intubated VATS, even though it is their initial experience of the procedure. In this study, we aimed to investigate whether any VATS surgeon can adopt this non-intubated VATS technique successfully. Future studies with a larger patient cohort may provide more accurate results. Thirdly, because the study was not a comparative one, we could not compare the results of non-intubated VATS with conventional VATS. However, there was no significant difference in surgical outcomes compared to those of previous studies. Therefore, it is reasonable to say that non-intubated VATS was found to be relatively safe, even in the initial experience of the procedure. We expect future randomized prospective comparative studies to demonstrate the utility of non-intubated VATS. Finally, we are not able to evaluate long term outcomes, especially oncological outcomes. As these procedures were conducted recently, long term results cannot of course be evaluated. In the future, we expect accumulated data and further studies to verify the oncological effectiveness of non-intubated VATS.

In conclusion, non-intubated VATS is a feasible option for surgical treatment of thoracic disease. The surgical outcomes were acceptable despite this being the initial experience with the technique. Older age and high BMI are risk factors for conversion to intubation. Therefore, for selected patients, it is safe to perform this evolving type of minimally-invasive surgery. We expect that increasing numbers of patients will benefit from non-intubated VATS as surgical and anesthetic techniques are further developed and future studies confirm the effectiveness of non-intubated VATS.

Ethical Statement: This study was approved by the Institutional Review Board of Seoul St. Mary’s Hospital (No. KC18RESI0173).