Heart failure (HF) with severely impaired left ventricular (LV) systolic function, and progressive decrease in cardiac output has been associated with poor life quality and reduced life expectancy. Also it is one of the main causes of death in developed countries (1). However pharmacological therapy has shown limited efficacy in increasing the myocardial contractility as well as inability in preventing an advanced HF from ulterior deterioration (2,3).

Cardiac contractility modulation (CCM) is a novel therapeutic method which delivers electrical current stimulation during the ventricular absolute refractory period (4). It has proven to be effective in improving cardiac contractility, thus presenting advanced HF patients with narrow QRS duration a strategy, as they are not candidates for cardiac resynchronization therapy (CRT) (1,4-10).

Previous researches have revealed that CCM can partially restore HF-induced calcium handle protein sarcoplasmic reticulum calcium ATPase (SERCA2A) reduction (4,6). However, the mechanism is still unclear and need to be further investigated (4). SERCA2A is an important calcium handle protein associated with LV function changes (11). The cardiac systolic and diastolic function are determined by rapid changes of calcium in cardiomyocytes. During the systole period, extracellular calcium is transferred into the cytosol via voltage gated L-type calcium channel, further combined with ryanodine receptor (RyR), which in turn triggers calcium influx to the cytosol from sarcoplasmic reticulum (SR). During diastole period, calcium is removed mainly by SERCA2A (12,13). Thus, the abnormal expression of SERCA2A is regarded as a hallmark of cardiac dysfunction (11).

Recently, it has been discovered that microRNAs have an important role in the pathological process of HF (14,15). In addition, one important study demonstrated that the SERCA2A mRNA and protein expression levels are negatively correlated with the expression level of miR-25 in trans aortic constriction (TAC)-induced HF mice model (16). In the present research, we hypothesized that the inhibition of miR-25 (upregulation of SERCA2A) might be regulated by CCM, thus further improving TAC-induced HF LV systolic function.

New Zealand rabbits, 2.3–2.5 kg weight, were bought from China Medical University animal center. All the animals were housed in an environment with 22±1 °C, relative humidity of 50%±1% and a light/dark cycle of 12/12 hr. All animal studies (including the euthanasia procedure) were done in compliance with the regulations and guidelines of China Medical University institutional animal care (Committee on Care and Use of Laboratory Animals) and were conducted according to the Helsinki Declaration as revised in 2013.

All the chemicals were purchased from Sigma Aldrich Corporation (St Louis, MO, USA) unless an alternate source was specifically referenced.

The TAC-induced HF and CCM models in this study were performed according to previously described approaches (6,17). Briefly, all animals were anesthetized using 3% pentobarbital sodium (30 mg/kg) via ear vein, a 25 mL volume of tidal and 50 breaths per minute on a respirator (Harvard Apparatus). This was followed by exposing the heart and dissecting the ascending aorta, then creating a constriction between the left common carotid and the innominate artery. Twelve weeks after operation, the rabbits with the LV ejection fraction (LVEF) ≤40% as HF successfully established (6). For the CCM model, one end of electrodes was sutured to LV free wall or right atrial free wall, while the other end was fixed to the neck for stimulation or sense. SHM group received the same surgical procedure without aortic arch ligation and ventricular pacing. In totally 37 out 45 rabbits survived for further experiment.

At the end of the experiment, the animals were sacrificed, hearts were quickly excised, and the LV myocardium was snap-frozen in liquid nitrogen.

The echocardiography parameters were acquired at the end of 16th weeks, as we previously described (18). Briefly, after animals were anesthetized, two-dimensional images and M-mode tracings were acquired to record the LV end systolic diameters (LVESD), the LV end diastolic diameters (LVEDD), the LV ejection fraction (LVEF) and the LV shortening fractions (LVFS) (GE Vivid Vision).

AAV9-miR-25 and unloading control were established following plasmid transfection described previously (19). Briefly, before transfection, the 293-T cells were cultured for 24 hours in DMEM growth medium supplemented with 10% FBS. The cells were harvested 72 hours later, and the DNase resistant virus was purified with an iodixanol density gradient (Genechem, China), followed by mixing the purified virus into a lactated Ringer’s solution (Genechem, China) by 100K MWCO centrifugal concentrators (Xiangyi, China), and stored under −80 °C. A treatment consisting of 5×1011 vector genomes (vg) per rabbit or unloaded control was injected into the pericardial cavity of the groups assigned to the miR-25 treatment or miR-25 control groups. Two of these animals died during the procedure.

The anti-miR-25 (Genechem, China) and the negative control (Genechem, China) were diluted following the recommendations of the manufacturer. The oligonucleotide was incubated for 20 min at 37 °C before injection. Animals that were assigned the anti-miR-25 or anti-miR-25 control administration received 100 µL of oligonucleotide solution or negative control injection into the jugular vein once a day for 3 days followed by once a week for the following 3 weeks (20).

Paraffin-embedded cardiac tissue section was incubated in 3% H2O2 for 20 min to reduce endogenous peroxidase activity after being deparaffinized by xylene and rehydrated in graded series of ethanol. To retrieve the antigens, the sections were heated 15 min in the microwave in target retrieval solution (Dako). To block non-specific binding, the slides were incubated in 10% goat serum at room temperature for 2 hours. Slides were then incubated with SERCA2A primary antibody at 4 °C overnight, followed the secondary antibody at 37 °C for 20 min. Binding was visualized with 3,39-diaminobenzidine tetrahydrochloride (DAB).

Statistical analysis was undertaken by SPSS software version 17.0. Mean ± SD was used for continuous variables. For multi-group comparisons, the data was analyzed using either a one-way ANOVA or a M-W U test, LSD was used for post-hoc test. A P value <0.05 was considered as statistically significant. 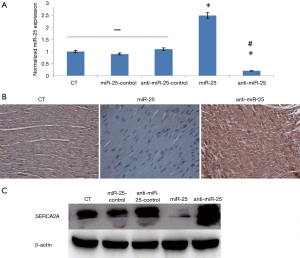 We further investigated the link between miR-25, SERCA2A, and LV function changes in the SHM group, the HF group and the HF + CCM group (Figure 2). The miR-25 expression was highest in the HF group when compared to SHM and HF + CCM (Figure 2A). Moreover, both mRNA and protein expression of SERCA2A were reduced in the HF group compared to SHM group; contrary, those levels were partially improved by CCM (Figure 2B). Furthermore, the LVEF was significantly reduced in HF group, but partially improved after CCM treatment (Figure 2C, Table 1). 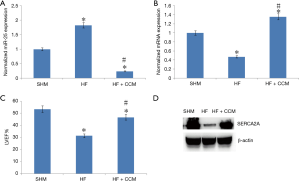 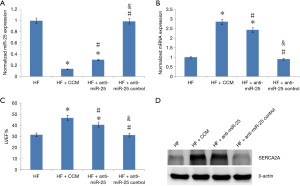 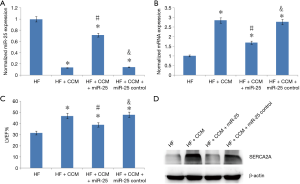 The major findings of the present study as follows: (I) the expression of miR-25 was increased while the expression of SERCA2A was decreased in the TAC-induced HF model; (II) miR-25 might play an important role in mediating mRNA and protein of SERCA2A expression, which might further lead to LV function alteration; (III) CCM improves TAC-induced HF LV systolic function, which may be partially related to inhibiting miR-25 expression.

A large number of end-stage HF patients are refractory to standard medical therapy, which has given rise to the development of novel strategies. One of the most prospective applicable approaches is CCM (4). Both preclinical and clinical studies suggest that CCM therapy can improve cardiac contractility (22,23). Animal research has revealed the acute effects of CCM in improving cardiac function might via the stimulating of norepinephrine release, and the chronic effects might be due to the restoration of HF induced SERCA2A, RyR, miR-133, and α-myosin heavy chain (gene) reduction (3,17). However, the underlying mechanism for CCM in remodeling the HF associated molecules is still unclear.

miR-25 is an evolutionarily conserved microRNA which has been demonstrated to possess many target genes, for example insulin, AMOAP1 and ATXN3 genes (29,30). SERCA2A is one of the most important target genes related to cardiac function. In our study, we found the expression of miR-25 increased in the HF + CCM group compared to the HF group. Whether the electric current delivered during the ventricular absolute refractory period by CCM induces the improvement of miR-25 is yet unclear. Interestingly, previous study has found CCM also can improve cardiac miR-133 expression levels, but the specific mechanisms under these changes need to be further studied.

Clinically, researches have demonstrated that CCM therapy can improve cardiac contractility and patients exercise tolerance, without increasing oxygen consumption (22,23). Moreover, contrary to CRT, CCM might be a useful option for both narrow and wide QRS duration HF patients (9,31). However, due to the invasive character, OPTIMIZERTM system (Impulse Dynamics Inc., Orangeburg, SC, USA) is the only clinically CCM to date (3). Moreover, the delivery of CCM signal wastes the battery which shortens the OPTIMIZERTM system use time (3). Therefore, additional studies regarding the mechanism and effect of CCM should be performed to support the wide use of the procedure.

This research also has limitations. This mechanism requires further validation by SERCA2A gene mutation and knock down animal models. Moreover, miR-25 and SERCA2A might be one of the mechanisms that underlie CCM treatment improving LV systolic function. The sample size in this study was also small, and thus large-scale animal and clinical studies are required to further evaluate the safety and mechanism of this promising procedure.

In summary, CCM is an expected therapy for advanced HF, which might work by inhibiting of miR-25 expression, which inhibiting the expression of SERCA2A mRNA and protein expression, thus improving the cardiac contractility. Our research partially revealed the mechanism underlying CCM in improving TAC-induced HF LV systolic function, as well as provided biochemical basis for it to be clinically implement.

Ethical Statement: The study was approved by the Ethics Committee of China Medical University (AF-SOP-07-1.1-01).