What information could the main actors of liquid biopsy provide? —a representative case of non-small cell lung cancer (NSCLC)

Collecting proper tissue samples is the key issue for molecular analyses, although it is not always an easy task, particularly in advanced NSCLC (4). Therefore, a blood draw could provide an alternative source of tumor samples.

In NSCLC, circulating tumor cells (CTCs) and circulating tumor DNA (ctDNA), simultaneously present in patients’ blood, could broaden, in concert, our knowledge on tumor characteristics and behavior. In particular, these biomarkers can be useful to detect “druggable” mutations and monitor TKIs, thus improving the prognosis (5).

CTCs can form metastases and, in NSCLC, they express both epithelial and mesenchymal markers (6). Regarding cell-free DNA (cfDNA), its concentration and/or tracking specific tumor mutations (ctDNA) could be used to monitor treatment effectiveness (7).

To obtain a more comprehensive view of the circulating cells, we investigated both epithelial cell adhesion molecule (EpCAM)-positive and EpCAM-low/negative cells, and evaluated in both subsets 2 cytokeratin-profiles. By monitoring CTCs and ctDNA at multiple time points throughout the care, we could reveal important information on disease evolution.

Through a single-tube procedure, this work demonstrated how and when these actors of liquid biopsy could be useful to improve the clinical management of the patient.

We collected serial blood samples at baseline, at the end of the first and second cycle of therapy, after radiological assessment, after surgery before starting the new treatment and after 6 months of post-surgery adjuvant treatment.

At each time point, we performed the quantification of EpCAM-positive and EpCAM-low/negative cells. Furthermore, we analyzed ctcDNA and cfDNA by droplet digital PCR (ddPCR) to disclose the allele frequency of EGFR L858R and T790M.

We enumerated EpCAM-positive CTCs in whole blood with the CellSearch System (CS) (Menarini, Italy) according to the manufacturer’s instructions and user’s guidelines [standard assay (SA)] (8).

The cells on microsieve were stained using a cocktail of fluorescently labelled antibodies, namely: FITC-conjugated detecting CK1-10, 13–16, 18, and 19 (AE1/AE3, eBioscience; C11, ACZON), APC-conjugated anti-CD16 and -CD45 (Invitrogen), and DAPI for nuclear staining (SA). The EA also included CK7 and 14 (Millipore) antibodies. Cells were scored as DAPI+CK+CD45−CD16−, with a minimum cell size of 4 µm × 4 µm, and a nucleus occupying at least 50% of the CK+ cytoplasm.

The patient underwent a CT scan showing a lung mass of 5.5 cm located in the upper left lung (Figure 1A); the neighboring mediastinal lymph nodes were involved. We performed a bronchoscopy, with bronchial biopsies. The immunohistochemistry revealed a P63-negative, TTF-1-positive adenocarcinoma. The mutation status in bronchial specimen was EGFR and ALK negative. 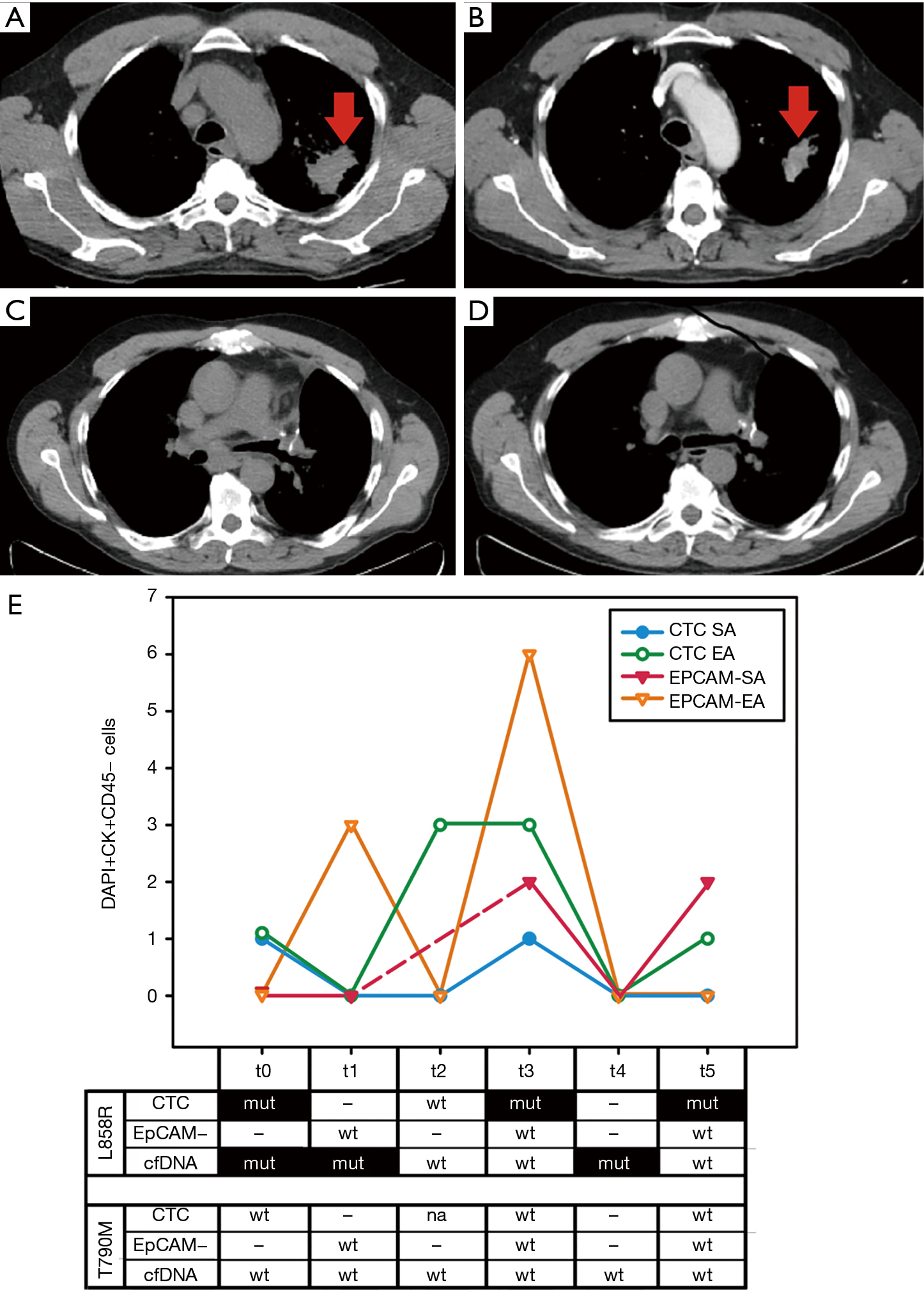 Based on this, we planned neo-adjuvant treatment (cis-platinum + vinorelbine). The patient showed a partial response (PR) according to RECIST 1.1 criteria (11) (Figure 1B), and then underwent surgical lobectomy. The surgical sample showed EGFR exon 21 mutation (L858R).

According to NCCN guidelines, the patient received three cycles of cisplatin and vinorelbine, as adjuvant treatment, until May 2016 (12).

In August 2016 however, an FDG-PET-CT documented disease progression in perihilar region of left lung (Figure 1C).

Table 1 compares clinical-pathological characteristics, treatments and imaging reports throughout the continuum of the care, with findings obtained through liquid biopsy. 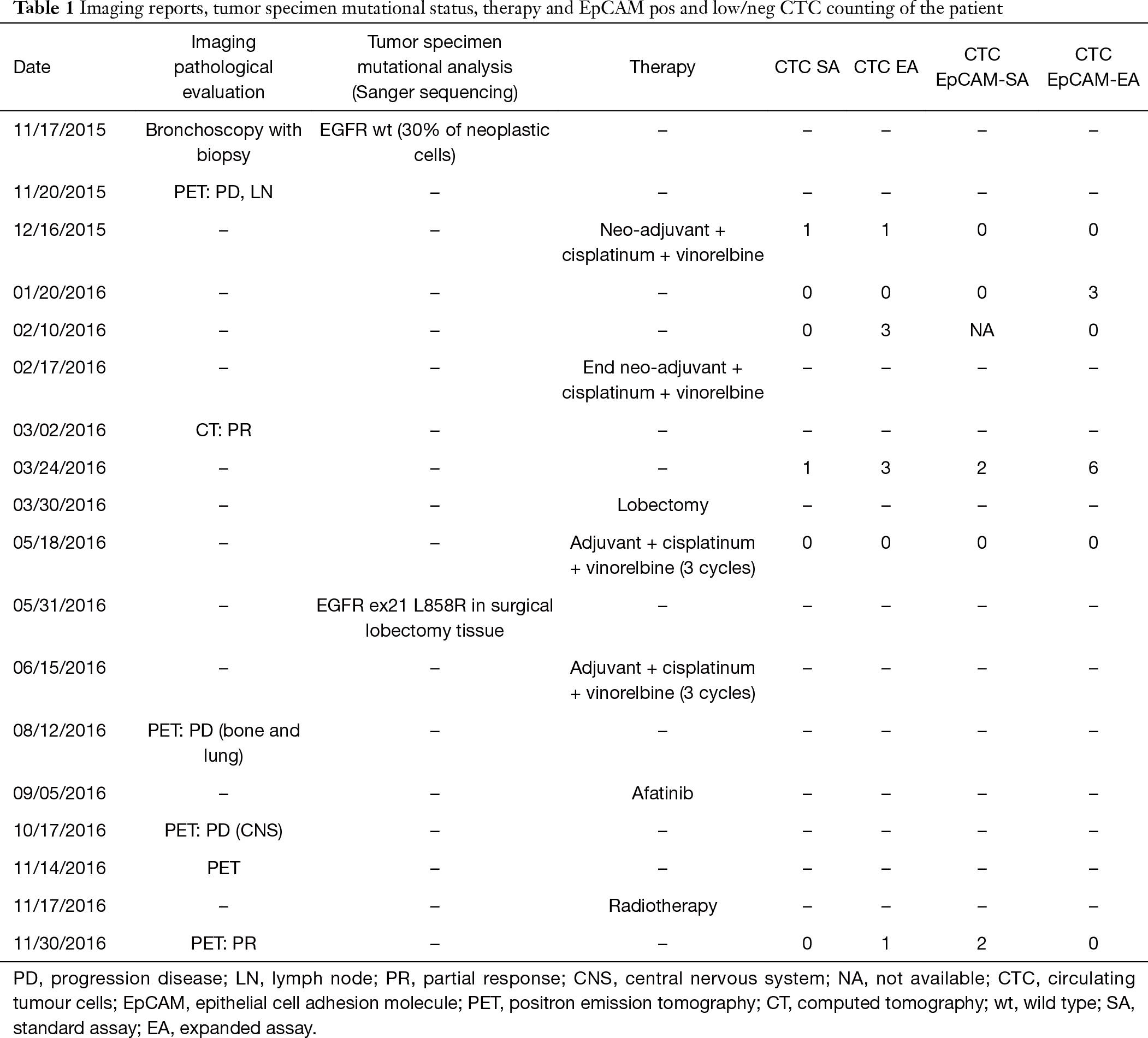 Notably, we highlighted the highest level in all CTC subgroups immediately before lobectomy (t3), while they were undetectable after lobectomy and 3 cycles of adjuvant + cis-platinum + vinorelbine (t4). Simultaneously, we analyzed by ddPCR the presence of EGFR mutated ctDNA at every time point, and DNA of CTC-positive samples, both EpCAM-positive and EpCAM-low/negative.

Interestingly, the mutational profile of CTCs also changed during treatment: at baseline (t0), in the EpCAM-positive fraction, we found the EGFR L858R mutation that was undetectable in the biopsy specimen using Sanger Sequencing. We documented the same mutation in EpCAM-positive EA CTCs after two cycles of therapy (t3) and at the last point of observation (t5). Conversely, EpCAM-low/negative CTCs were always negative for L858R. The CTC and ctDNA samples analyzed were all negative for the T790M mutation.

Curiously, when CT showed a PR (Table 1 and Figure 1B,D), we noticed the presence of at least one CTC subpopulation; moreover, EpCAM-positive and EpCAM-low/negative CTCs persisted at the last time point (t5).

The main challenge of targeted therapies in NSCLC, as well as in other malignancies, is tracking the disease dynamics to measure the effectiveness of treatment and to anticipate a change of therapy, when appropriate. Here, we demonstrated, through serial sampling of an individual patient, how the analysis of the different components of liquid biopsy could shed light on the tumor strategy to escape treatment.

Indeed, during platinum-based chemotherapy, the tumor releases EpCAM-low/negative CTCs; consistently with previous reports in others malignancies, where this treatment seems to recruit EMT-like CTCs (13,14).

However, the EpCAM-positive subpopulation reappeared at the end of the second cycle of therapy; this could imply an escape strategy of the disease and the coexistence of different CTC subpopulations.

Interestingly, at the last time point, when radiological control referred SD, we observed EpCAM-positive and EpCAM-low/negative cells, and found the L858R mutation in EpCAM-positive CTCs. On the one hand, we should not underestimate the presence of different subpopulations of CTCs in conjunction with a PR, especially if we consider that these cells represent an intermediate step toward metastasis. On the other hand, the fact that at least one of them is carrying an activating EGFR mutation demonstrates that TKIs are of potential benefit in this patient, as documented by the long-term control of his disease that we obtained with afatinib, from February 2017 until now. A consensus exists that CTCs are heterogeneous and could allow real-time tracking of the tumor transient states. Moreover, CTCs could show the spectrum of mutations and/or protein expression alterations present in cancer. Indeed, we noted here that the four CTC subpopulations allow the monitoring of the different steps of cancer evolution in response to treatment.

Furthermore, we observed a slight discordance about the L858R detection timing between the golden standard analysis of tumor specimens, CTCs and ctDNA.

Discrepancy between mutational status as documented in bronchial biopsies and surgical sample after lobectomy, is not surprising and we can easily explain it, because of a limited sampling offered by bronchial biopsies. Indeed, at this regard, cfDNA, intended as the sum of different neoplastic lesions present at any time in individual patient, seems to be more advantageous, when highly sensitive technique has been using to detect L858R, as ddPCR in our case report. At this regard, we should reflect about the superiority of ctDNA in choosing target treatment, also when bronchial specimens give negative results.

However, our findings do not support the superiority of ctDNA at any time of patient’ monitoring. For example, before lobectomy (t3), when likely chemotherapy affected the release of CTCs in the blood stream, we could detect EGFR mutation in EpCAM-positive tumor cells, but not in ctDNA. Indeed, it is conceivable that changing level of few cells, did not affect the total amount of ctDNA to result in EGFR detection by using this technique, whereas ctcDNA investigation was more useful at that time.

This finding suggests the complementary use of these tests (15): taking them together, in this patient they better reflected spatial and temporal heterogeneity of the tumor under the selective pressure of treatment.

To date, the development of resistance in cancer cells, acquired via clonal evolution during treatment, represents the main challenge of a successful targeted therapy. To bypass this bottleneck, an element of the utmost importance is an accurate design of the therapeutic strategy. However, to achieve this goal, we need robust biomarkers for serial tumor profiling (16). Indeed, high effort has been made, so far, to standardize and validate, in clinic, consensus analyses of liquid biopsy, as CTCs and ctDNA/miRNA, by several scientific consortia [e.g., STALKLUNG01, AIR Study Consortium (17), or CANCER_ID, www/cancer-id/eu], so that we are confident to receive soon advanced remarks at this regard.

In our study, the actors of liquid biopsy and their specific characteristics disclosed a polyclonal resistance that could allow up-front, combination therapy to prolong treatment response.

It still has to be clarified, in further larger studies, how the CTC subgroups join forces in high-risk patients. In the future, we might use this information to design a tailored therapeutic strategy to hinder the continuous tumor evolution.