Endobronchial ultrasound-guided fine-needle aspiration (EBUS-FNA) is an accurate and safe method for establishing a histological diagnosis, for the staging (1), but also for the genotyping (2) of lung carcinomas.

Mediastinal lymph node metastases from pulmonary carcinomas, proven by EBUS-FNA, commonly imply a non-surgical systemic treatment. This treatment must be promptly implemented since lung carcinomas are aggressive tumors (3). The type of treatment depends on possible targetable genetic alterations (4). However tumor genotyping is generally a long and complex process (5) and patients may have to start treatment before biomarkers results are available (6). We have shown that a simple-to-use method could rapidly provide epidermal growth factor receptor (EGFR) and Kirsten rat sarcoma viral oncogene (KRAS) status in lung carcinomas (7). We herein report our experience with EBUS-FNA and lung carcinoma genotyping, focusing on how EBUS-FNA is significantly improved by such a rapid molecular diagnostic tool.

EBUS-FNAs were performed under moderate sedation or less often under general anesthesia with bronchoscopes fitted with color Doppler ultrasound capability and a 21-gauge needle. Lymph node stations were selected for their positivity on positron emission tomography. Subcarinal and right lower paratracheal lymph nodes were more frequently sampled. However, all other accessible stations (upper paratracheal, left lower paratracheal, hilar, interlobar or lobar) were punctured if needed. Two to eight passes (3 passes on average) per lymph node were performed. A part of the aspirates was smeared on cytology slide and stained with toluidine blue for rapid on site evaluation. Aspirates were afterwards formalin-fixed and paraffin-embedded (FFPE).

Carcinomas were classified according to the 2015 WHO classification (3). Immunohistochemistry and mucin stain (alcian blue) were performed if necessary, according to the current diagnostic recommendations (8). Antibodies against TTF1, p63 and Keratin 7 were used with a Ventana BenchMark GX automated stainer. There were 234 adenocarcinomas, 52 squamous cell carcinomas and 112 non-small cell carcinomas not otherwise specified.

For molecular genotyping, paraffin blocks or blank slides and paraffin shavings were sent to Gustave Roussy University Hospital. Before 2016, mutation assessment was performed by gene amplification with PCR and direct sequencing of exons 18 to 21 of EGFR gene (GeneBank NM005228.3). Exons 2 and 3 of K-RAS gene (NM033360-2), exon 15 of BRAF gene (NM004333.4), exons 10 and 21 of PIK3CA gene (NM006218.2) and exon 20 of HER2 gene (NM 004448.2). Since January 2016, molecular analyses were performed with Vela Diagnostics CE-IVD Sentosa® SQ NSCLC Panel for Next-Generation Sequencing. ALK immunohistochemistry was performed in Gustave Roussy University Hospital, or in Marie Lannelongue Hospital since January 2017, using an anti-ALK antibody (clone 5A4 Zytomed Systems). In situ hybridization was performed with Vysis ALK break apart probe kit (Abbott).

In recent cases, EGFR and KRAS mutational status was also assessed in the department of pathology at Marie Lannelongue Hospital, using the fully automated real-time polymerase chain reaction based Idylla™ (Biocartis, Mechelen, Belgium) system as previously reported (7). Briefly, this system is intended for the detection of 52 mutations in the EGFR oncogene: exon 18 (G719A/S/C), exon 21 (L858R, L861Q), exon 20 (T790M, S768I) mutations, exon 19 deletions and exon 20 insertions, and for the detection of 21 mutations in codons 12, 13, 59, 61, 117 and 146 of KRAS oncogene. Tests were performed on sections of FFPE material. These tests could also be performed on fresh material (20 µL of fluid) after making a diagnosis on intra-operative cytology. KRAS and EGFR were tested first separately in smoker and non-smoker patients, respectively. The second gene was not tested in case of positivity since EGFR and KRAS mutations are generally mutually exclusive (9). Among the 43 patients who benefited from this rapid technique, 17 were stage III, 22 were stage IV, 10 were nonsmokers and 29 were smokers (more than 10 pack-years).

Genetic diagnoses were compared with those obtained similarly with tissue from the pulmonary tumor when available.

This study had the approval of the Ethics Committee of Marie Lannelongue Hospital (CCML 25-2016, 5th September 2016).

A genetic diagnosis was obtained in 316 of the 398 cases (79.4%) and in 180 of the 198 (90.9%) more recent cases (2015 to 2017). Noncontributory cases were related to insufficient tumor cellularity or to unsuccessful DNA amplification. Abnormalities were detected in 191 cases (48.0%), including 30 cases with EGFR mutations, 90 cases with KRAS mutations and 11 cases with ALK rearrangement (Figure 1). In 35 cases, a genetic analysis was also performed on tissue sample from the pulmonary lesion. Results were identical in 24 cases. In 8 cases with noncontributory EBUS-FNA samples, a diagnosis was obtained on surgical samples (n=6), bronchial biopsy (n=1) or transthoracic needle biopsy (n=1). On the contrary, in three cases, the genetic diagnosis was obtained with EBUS-FNA sample while transthoracic needle biopsy was noncontributory. 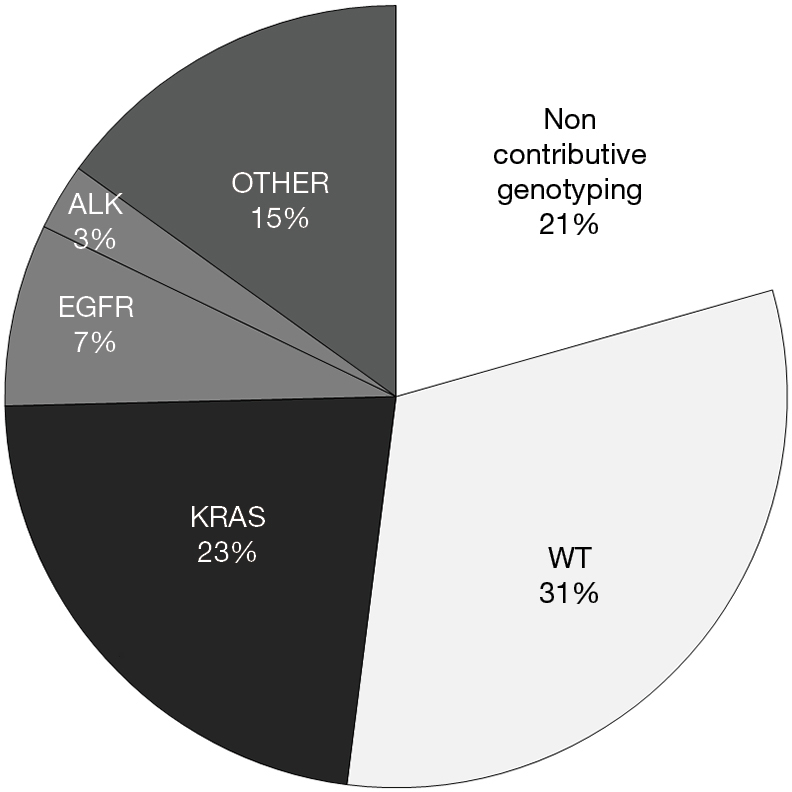 With the usual procedure (external platform), the first molecular diagnosis (including EGFR) was obtained within 3 weeks or less in 275 cases (69%) but never in less than 8 days after sampling of the patient (Figure 2). 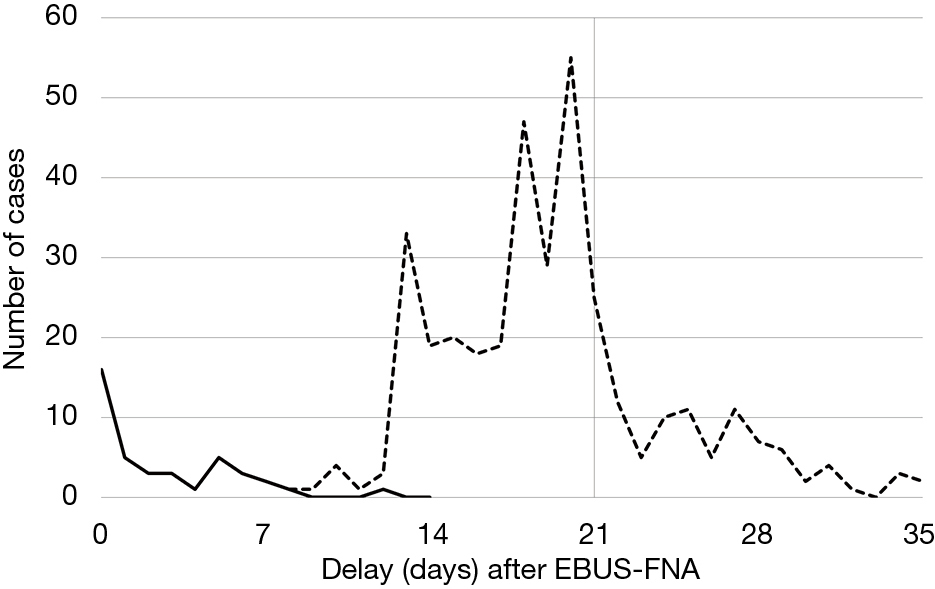 Figure 2 Comparison of the delay for EGFR/KRAS mutational status by the on-site rapid Idylla™ system (continuous line) with the delay for the first molecular result including EGFR by the external biopathological platform (line with dashes).

With the rapid technique performed locally in 43 cases, the EGFR/KRAS mutational status could be obtained within a few hours after histological diagnosis; in fact it was obtained in 1 week or less in 38 cases (88.4%) and even on the very day of the EBUS-FNA procedure in 16 cases (Figure 2). In the 43 cases, our sequential testing method permitted to avoid 13 EGFR tests and 6 KRAS tests, which the external platform later proved to be negative and were thus useless. Specificity and sensitivity of this rapid technique were 100% and 80% for EGFR and 100% and 87% for KRAS, respectively. In 3 cases, a mutation was not detected by the IdyllaTM system: EGFR T790M, KRAS G13C (mutation that is not tested by this technique) and KRAS G12C. Conversely, in 1 case the IdyllaTM system identified a KRAS G12C mutation that had not been detected initially by the routine reference method.

Otherwise, two cases of pneumothorax and one case of transitory respiratory failure occurred after bronchoscopy. These minor complications only required medical management of the patients. There was no major complication, no significant bleeding and no death.

EBUS-FNA is a minimally invasive method for tissue sampling of mediastinal lymph nodes (10). Our study confirms its importance in the genotyping of pulmonary carcinomas. Indeed, this technique has been shown to be as effective as surgical procedures for complete mutational testing of non-small cell carcinomas (11-13). With the development of immunotherapy other biomarkers are routinely required and samples obtained by EBUS-FNA also appear suitable for the evaluation of PD-L1 expression in lung cancer (14). The diagnostic accuracy rate of EBUS-FNA has been reported to increase with time according to a learning curve (1). In our experience the implementation of more performing techniques also certainly contributes to the improvement of the diagnostic quality.

In a recent study, we have shown that the IdyllaTM system could be used in everyday practice for assessing EGFR and KRAS status in lung carcinomas (7) even in routine diagnostic units of any hospital, without molecular expertise and infrastructure, without complex training and with very good specificity and sensitivity. This was confirmed in another series (15) and for EGFR on cytological specimens (16). Unfortunately, the KRAS IdyllaTM cartridge has been initially designed for colorectal cancer (17) and this made us miss a non-targeted G13C mutation, which represent up to 3% of KRAS mutations in lung carcinomas (9). In our experience the main advantages of the IdyllaTM system are rapidity and ease of use, making molecular analysis even simpler than immunohistochemistry with explicit results requiring no specialized interpretation. IdyllaTM system for EGFR and KRAS status must be used in association with immunohistochemistry for ALK, ROS1 and PDL1. These rapid techniques can provide the most needed biomarkers at the time of histological diagnosis of lung carcinoma and their results can be included in the initial pathological report. Complex and time-consuming techniques (in situ hybridization, DNA sequencing) can be performed secondarily, usually by external biopathological platforms. Sequential testing is supposed to cause delay but this is not the case for rapid techniques that can be used in combination with multiplex platforms. Indeed, EGFR and KRAS mutations sequential testing in lung carcinoma, by selecting the gene that is most likely to be mutated, can be a pragmatic more cost-effective approach (8,18) since EGFR and KRAS mutations occur in different clinical and histological settings (7) and mutations of these genes are virtually always mutually exclusive (19).

Such a rapid molecular diagnostic procedure is totally fitted to EBUS-FNA: EBUS-FNA is itself a rapid technique and when confirming mediastinal involvement is generally an indication to prompt medical treatment. During our study, the rapidity of the diagnosis was very appreciated by clinicians. However, we could not assess the real impact on the therapeutic management since both clinicians and patients were informed of pending results by the usual reference method.

Rapid on-site evaluation is an intra-operative cytological assessment of EBUS-FNA samples. It has been reported to be associated with lesser number of needle passes (20), to be helpful in providing a preliminary diagnosis (21) and to improve the adequacy for molecular testing (22). This rapid on-site evaluation is a current practice in our hospital and we have found it very useful for selecting fresh material for immediate molecular analysis, thus also reducing the time for a definite diagnosis. The smear can be used for the pre-analysis. Molecular testing of fresh specimens rather than formalin fixated and paraffin embedded material (19) permits analysis of non-deteriorated DNA (23). It was very convenient and useful to have an available system ready to use in our department.

In conclusion, our study shows that, with the help of rapid, cost-effective and easy-to-use molecular techniques, EBUS-FNA has the potential to become even more efficient to meet the need of oncologists for enabling a more rapid initiation of appropriate therapy in lung cancer patients.

Ethical Statement: The study was approved by the Ethics Committee of Marie Lannelongue Hospital (No. CCML 25-2016).