Despite the technical advances in gastric conduit formation or anastomotic methods, the anastomotic complications following the surgical resection of esophageal cancer (EC) have continued to perplex thoracic surgeons (1-6).

Triangulating stapled (TS) anastomosis for GEA has been shown to be associated with lower incidence of anastomotic complications (7-10). However, there was only one previous report comparing the results of TS with circular stapled (CS) anastomoses, and partially due to the limited number of patients, the incidence of anastomotic leak of both TS and CS was undesirable (TS, 2/8, 25.0% vs. CS, 1/12, 8.3%) (7).

In this report, we describe our surgical technique of TSA in the cervical part and examine its efficacy in compared with circular staplings.

From January 2013 to November 2013, a total of 84 EC patients underwent minimally invasive esophagectomy (MIE) at Zhongshan Hospital of Fudan University were included in this retrospective study. The study was approved by the hospital ethics committee, and a waiver for individual patient consent for this retrospective study was also obtained from the ethics committee. All patients were diagnosed as EC by endoscopic biopsy. Physical examination, standard laboratory tests, electrocardiogram, and lung function test were performed in all patients. Preoperative staging was determined by enhanced thoracic and abdominal CT. According to the clinical findings, T1-3N0M0 EC patients were selected as candidates for MIE. The clinic characteristics of patients were shown in Table 1. 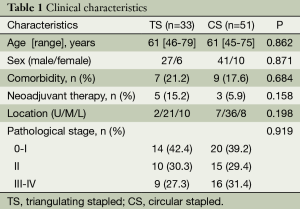 All operations were three-stage MIE, which was described in previous publications (11,12). The operation was performed by the same surgeon (L.T). A 3.0 cm wide gastric tube formed by linear staplers (TLC75, Ethicon Endosurgery, Cincinatti, OH, USA) was used for alimentary reconstruction. GEA was performed by cervical end to side CS anastomosis until July 2013 or a more proximal anastomosis which was difficult for TS (CS group, n=51) and by the cervical TSA after August 2013 (TS group, n=33). 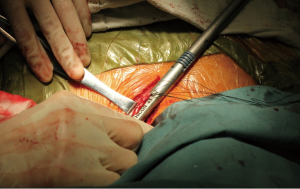 Figure 2 The second and third stapling was applied to the anterior wall of the remnant esophagus and the gastric conduit in an extroverted fashion by the linear cutter with stay sutures. 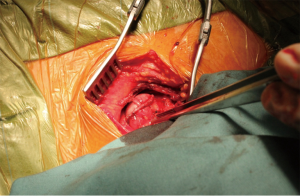 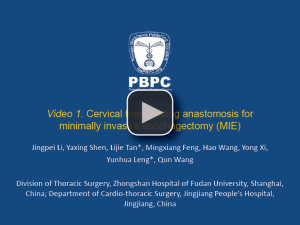 Differences between the TS and CS were assessed using the Wilcoxon rank sum test for continuous variables, the chi-square or Fisher exact tests for categorical variables. For all calculations, a P value of <0.05 was considered to be significant. Statistical computations were all performed by SPSS software, version 19.0 (SPSS, Inc, Chicago, IL, USA).

In this study, eighty-four patients were enrolled, including 68 men (81%) and 16 women (19%). The median age was 61 years (range, 45-79 years). Sixteen patients presented with significant comorbidity and eight patients received neoadjuvant therapy. There were no significant differences in clinical characteristics between two groups (Table 1).

None of the procedures were converted to thoracotomy. Postoperative pathology reported that all cases were squamous cell carcinoma. The overall incidence of postoperative complications was significantly lower in TS than that in CS (15.2% vs. 35.3%, P=0.043). There was no significant difference in length of hospital stay, and mortality rate between two groups (Table 2). 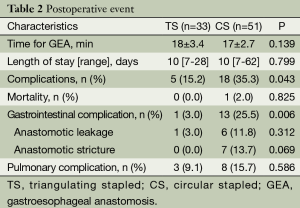 No difference was found for the mean time of GEA. In TS, there was only one minor leakage, which healed after 16 days of drainage. Of the six cases of leakage in the CS group, five (83.3%) were minor or moderate, and resolved after inserted drainage from a cervical drain However, One of these six patients in CS died of severe anastomotic leak during the perioperative period. Anastomotic leakage tended to occur less frequently in TS than in CS, although the difference was not significant (3.0% vs. 11.8%, P=0.312).

Patients who suffered swallowing dysfunction following the operation would receive endoscopic examination, and the stenosis was defined to the cases when endoscopic dilation at the anastomotic portion was required. Post-operative stenosis was found in 0.0% and 13.7% for the TS and CS anastomosis, respectively (Table 2).

In this study, modified TS anastomosis was introduced to the gastroesophageal anastomosis (GEA) during MIE, and it was found to be superior to CS anastomosis in the incidence of postoperative complications. The overall gastrointestinal complication was significantly lower in TS following the surgery, which suggested TSA as a safe and effective alternative for GEA.

The gastric tube is the most commonly used conduit for the GEA. The major complications after GEA, including anastomotic leakage and anastomotic stricture, are frequently encountered, which would prolong patients’ hospital stay, compromise quality of life, and even be life-threatening (1,2,13,14). However, previous studies, either on gastric formation or anastomotic methods, were based on improvements of blood supply in the reconstruction of gastric conduits and the outcome was less promising (2,4-6).

There are encouraging results of TS anastomosis in both colo-colonic (15,16) and GEA (8,9). Theoretically, this end to end anastomosis preserves the integrity of vascular network of the gastric wall, which provides more blood supply to the anastomotic site. Furthermore, it allows reserving longer gastric tube and bringing less tension to the anastomotic site and it would be ideal for the passage of food. Finally, our modification that only two-thirds of the proximal gastric conduit was cut open for the GEA, which may ease the procedure of the first stapling for the anastomosis, and it would be convenient for further adjustment before the first linear stapler was fired. As in our study, anastomotic leak in TS had the tendency of reduction compared with CS.

Conventionally, anastomotic stenosis after CS anastomosis occurs in 12.3-20% (17,18), which remains considerable concerns for this technique. The cause may include that all the layers of alimentary tract are punched out, which led to unexpected exposure to the inner lumen of the alimentary tract for the muscular layer (7). It is easily understood that this would increase the incidence of stenosis. For TSA, however, only one third of the anastomotic site is inverted, which theoretically may greatly eliminate the adverse effect caused by CS anastomosis. As a result, there was no anastomotic stenosis in TS (Figure 5), compared with 13.7% in CS (Table 2). 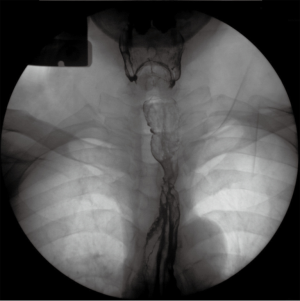 Additionally, other series reported reducing the time to perform GEA by using the TSA (7). Since this was our initial experience, the recorded time for GEA had no significant difference between two groups.

However, the limitations of our study include its nonrandomized retrospective study design and its lack of exploration of the long-term effects of TSA, especially on quality of life analysis. To minimize technical bias, all operations were performed under the guidance of one single experienced surgeon. We chose to include patients only in whom the esophageal bed was used as the route for the conduit pull-up, since the retrosternal route has been reported to be longer in length than the posterior route (19).

In conclusion, the TSA is a safely and effectively alternative method for cervical GEA. Further randomized controlled trails are needed to confirm this conclusion.

TSA is a safe and effective alternative for GEA, which would probably lower the incidence of leakage and stenosis following MIE. Further studies based on larger volumes are required to confirm these findings.

I would like to extend my deepest gratitude to my mentor, Dr. Lijie Tan, an honest, selfless and visionary scholar, who has instructed me how to conduct a good research, as well as what makes a good doctor.