Extra vascular lung water (EVLW) is all the fluid within the lung outside the vascular compartment. Its presence depends on hydrostatic pressure and pulmonary capillary permeability and clinically correlates to pulmonary oedema (1). Immediately following pulmonary resection, several conditions are known to enhance EVLW expansion including a rise in the permeability of the alveolar capillary membranes due to inflammatory states (2,3), fluid infusion, a decrease in the vascular bed for the loss of pulmonary tissue and an increase in the capillary surface due to capillary recruitment (4).

The increase of EVLW generates alveolar-interstitial syndrome (AIS) which is clinically linked to pulmonary oedema with impaired gas exchange and may result in postoperative acute lung injury which is associated to mortality ranging from 20% up to 100% (5). The clinical signs of pulmonary oedema present themselves only once EVLW rises over 7 mL/Kg of ideal body weight (4). The clinical relevance of these findings is that, following major pulmonary resection, an early assessment of this postoperative EVLW increase could reduce the risk of postoperative complications especially in critical patients.

Among other things, lung ultrasonography (LUS), compared to other currently used methods for the detection of EVLW increases, has been reported to be a non-invasive, affordable and radiation-free technique, allowing for a rapid detection (6). Specifically, sonographic B-line artefacts (BLA) originate from fluid in the alveoli or water-thickened interlobular septa, are absent in normal lungs and have been shown to predict the presence and burden of EVLW (7). BLA indicate a loss of lung aeration, due to interstitial disease involvement, and the number of lines increases with decreasing air content and increasing lung density of the peripheral lung parenchyma (6). Moreover, LUS has been studied in various groups of critically ill patients. Reported results suggest that EVLW levels were independently associated with worse prognosis (8,9).

In light of the above, we proposed to assess the EVLW levels utilizing LUS on a group of non-small cell lung cancer (NSCLC) patients accepted to undergo major pulmonary resection. We conducted a prospective, single-centre, observational study to investigate if bedside LUS could detect EVLW increases after major pulmonary resection in consecutive NSCLC patients. Secondary aims included investigating for associations between observed EVLW increases and both respiratory ratio (PaO2/FiO2) and fluid retention estimated by brain natriuretic peptide (BNP).

This prospective observational cohort study was carried out between June and December 2015 at a single tertiary care hospital. The study protocol was approved by the local regional ethics committee (reference no. 28609/11). Informed written consent was obtained from each patient prior to enrolment. This prospective study investigated if bedside LUS could be useful for detecting EVLW increases after major pulmonary resection in consecutive NSCLC patients. Sample size was not calculated as we had not had any “a priori” indication of whether any difference was to be expected and the size of any possible changes.

All surgical procedures were performed using standard posterolateral thoracotomy or three-portal video assisted thoracic surgery (VATS) under general anaesthesia with selective one-lung ventilation and the insertion of a radial arterial catheter to guarantee continuous blood pressure monitoring. All resections included systematic lymph node dissections. All patients were extubated immediately after surgery and no patients were re-intubated after this. Moreover, all patients were treated in accordance with the established practice of fluid-restriction regime (10).

All thoracic ultrasounds were carried out and interpreted by an emergency-internal medicine physician (CB or AM), who had decade-long experience in performing LUS techniques. Moreover, these physicians were blinded to the clinical findings of the patients. All LUS scans were performed at bedside the day before surgery and at days one and four post-surgery using a GE Logiq E portable ultrasound device and a 3.5 MHz abdominal convex probe. LUS assessment was performed on the hemi-thorax contralateral to the site of surgical procedure; this sought to reduce the risk of any confounding results associated with lung manipulation and the presence of subcutaneous emphysema.

All patients were assessed in a sitting position with the homolateral hand placed behind the neck. Chest scans were performed according to international evidence-based recommendations for point-of care LUS using a simplified four-sector protocol (11). Each hemithorax was divided into four quadrants, in order to define the anterior and lateral regions; the parasternal, anterior axillary and posterior axillary lines were traced and each region was further divided into an upper and lower sub-region at the fourth intercostal space (Figure 1). Therein, four scanning sites resulted for each hemithorax: upper anterior, upper lateral, lower anterior and lower lateral. As the reference standard, for each of these sites, BLAs were estimated applying a four-level semi-quantitative method: sum the BLA estimated for each scanning site in order to yield a score (I for no BLA, II for 1–3 BLA, III for 3–5 BLA, IV for >5 BLA). When performing LUS, patients were required to breathe deeply, maximizing their degree of respiratory excursion. The mean time of LUS investigation was 8 minutes (Figure 2). 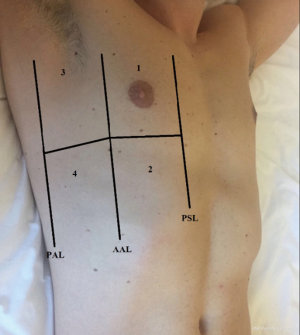 All analytical measurements were performed at our in-hospital laboratory. Fasting haematological, biochemical profile and the levels of BNP were measured the day before surgery and on the mornings of the first and fourth postoperative days using a technique already described (12). Respiratory ratio PaO2/FiO2 was assessed the day before surgery and on the morning of the first postoperative day by arterial sample with patients in a sitting position and breathing room air.

Data were analyzed cross-sectionally, on the first postoperative day, and longitudinally before surgery and on days 1 and 4 post surgery. In the cross-sectional analysis, for the 4-level ordinal outcome variables, measured at postoperative day 1 in the four sub-regions, a multivariate proportional odds model was assumed (13). This model used baseline individual characteristics as covariates. Missing data in these covariates were handled by a random donor imputation technique, so that an augmented data model could be implemented according to the generalized missing-indicator approach (14). In the longitudinal analysis, a mixed-effect proportional odds model for repeated measures was estimated. This model used patient-level random effects and baseline individual characteristics as covariates (15). Both analyses were carried out using R software, applying the package ordinal (http://cran.r-project.org/web/packages/ordinal/ordinal.pdf).

In our study we enrolled 74 consecutive patients who underwent 64 lobectomies and 10 pneumonectomies. Patient characteristics are provided in Table 1 and surgical results are listed in Table 2. Baseline LUS, one day prior to surgery, revealed level I (absence of BLA) in all four scanning regions, and BNP values were within normal range for all patients. In addition, we observed BLA increases on postoperative day 1 and significantly lower BLA levels on day 4 for all patients (Figure 3). After adjusting for the time effect using a suitable set of time dummies (Table 3) surgery resulted being associated with both BLA increase at postoperative day 1 (OR 9.256; 95% CI, 5.286–16.208; P=0.000 vs. baseline), and BLA decrease at postoperative day 4 (OR 0.503; 95% CI, 0.316–0.800; P=0.004 vs. postoperative day 1). Overall, the increased BLA value at day 1 post-surgery was significantly associated with both increased BNP (OR 1.005; 95% CI, 1.003–1.008; P<0.001) and body weight (OR 1.040; 95% CI, 1.008–1.073; P=0.015) (Table 4). Specifically, BNP was increased on postoperative day 1 and was significantly lower than this on day 4. Moreover, the day after surgery, a significant inverse correlation was observed between the BLA values and the PaO2/FiO2 respiratory ratios; this correlation remained significant after adjusting for the individual covariates (OR 0.592; 95% CI, 0.550–0.991; P=0.040) (Table 5). Patients affected by diabetes (OR 4.769) or systemic arterial hypertension (OR 2.478) had larger increases in BLA values on day 1. A non-significant positive association was observed between BLA and preoperative forced expiratory volume in 1 second (OR 1.04), while a negative association was observed for sex (OR 0.192 for males vs. females, 95% CI, 0.060–0.618; P=0.006). Non-significant associations, even when using quadratic or smooth functions, were revealed for age, body mass index, side of surgery, VATS or open procedure, lobectomy or pneumonectomy, surgical approach and length of surgery. Finally, throughout the analysis, a non-significant association was observed between post-surgery complications and BLA increase. 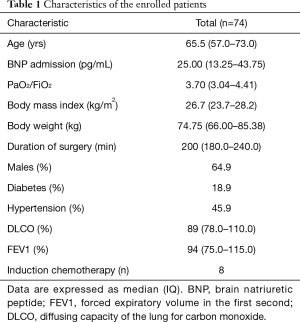 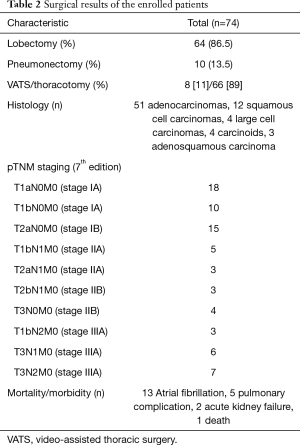 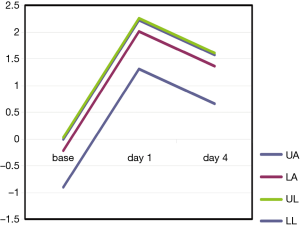 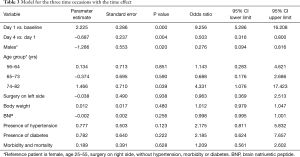 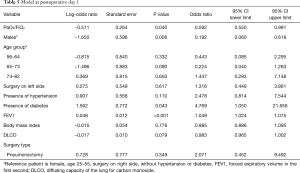 Our primary result suggests that, in the absence of any signs and/or symptoms of heart or respiratory failure, bedside LUS was able to detect at 24 hours post-surgery EVLW increase. This finding might be relevant because pulmonary fluids status is a common problem particularly following major pulmonary resections that is implicated in the development of interstitial pulmonary oedema and in a clinically relevant accumulation of EVLW. Therein LUS seems able to allow for an early and tailored management of patients following pulmonary resection.

Moreover, LUS might have a useful role in monitoring the postoperative modification of hydration status and in directing the diagnostic process. This is suggested by the fact that our data indicate significantly lower BLA levels on day 4 post-surgery for all patients, compared to day 1. This conclusion is in line with several past studies (16) reporting that changes in BLA were rapid.

We observed that at day 1 after surgery there was a significant inverse correlation between the BLA values and the PaO2/FiO2 respiratory ratios. Though many known factors can play a role in altering this ratio, the air-blood barrier is a functionally dry space reflecting a condition of minimum hydration (4). Therefore, it is plausible that, our observed postoperative rise of the interstitial water might have triggered an increased thickness of the air-blood barrier and consequently an impairment of gas exchanges.

Our results did not suggest a correlation between BLA increase and the incidence of postoperative complications. This could have been influenced by the limited patient pool, the adoptions of the ASA score ≤3 and NYHA ≤ II and by the fact that all patients were treated in accordance with the established practice of fluid-restriction regime (10). Moreover, BLA variation can be associated with many factors including perioperative fluid input and output, as well as intraoperative ventilation strategy.

Limits of this study were: it was a single-centre study conducted on a limited number of patients and limited a-priori knowledge was available to define an ideal sample size. Despite these limitations, we do not seek to make recommendations with our obtained results.

In conclusion, LUS resulted being able to detect asymptomatic post-operative EVLW increases after surgery. Though LUS did not seem to be able to measure EVLW postoperatively, the results of our study suggest that LUS was able to detect early variations in EVLW following pulmonary resection, therein allowing for the management of interstitial fluid increase before the onset of symptoms. This later result, if confirmed, could lead to a reduction of the risk of postoperative complications especially in critical patients.

Ethical Statement: The study protocol was approved by the local regional ethics committee (reference no. 28609/11). Informed written consent was obtained from each patient prior to enrolment.