We have previously demonstrated that intraoperative near-infrared (NIR) imaging with second window indocyanine green (ICG) (5 mg/kg given 24 hours prior to surgery) can identify pulmonary nodules by the enhanced permeability and retention (EPR) effect (8). In this report, we detail the first time NIR imaging has been used during minimally invasive surgery to locate sub-centimeter colorectal cancer metastases. Specifically, we identified 2 and 3 mm colorectal cancer metastases that would have been missed without the benefit of this approach.

A 45-year-old woman with a history of stage III colon cancer status post hemicolectomy with adjuvant chemotherapy and stage I non-small-cell lung cancer status post right middle lobectomy presented with multiple bilateral lung nodules (maximum diameter 0.5 cm) on surveillance CT scan (Figure 1A). She was referred to our thoracic surgery clinic by her medical oncologist for diagnostic biopsy to plan appropriate chemotherapy and was scheduled for a left VATS wedge resection. Twenty-four hours prior to surgery she received 3 mg/kg intravenous ICG as part of an intraoperative NIR imaging trial.

Upon entering the thoracic cavity during VATS, no lung nodules were seen. However, on intraoperative NIR imaging, two tiny nodules were identified in the left upper lobe (Figure 1B,C,D,E,F,G). A wedge resection of each nodule was performed, fluorescence was confirmed on the back table (Figure 2A,B,C,D,E,F), and one of the specimens was sent to pathology for a frozen section diagnosis. The location of the nodule within the specimen was not obvious to the pathologists. Therefore, NIR imaging of the specimen was used in the pathology suite to ensure proper nodule identification and specimen sampling for frozen section pathology. Fluorescence was also confirmed on the frozen section block (Figure 2G,H,I). The frozen section diagnosis was metastatic adenocarcinoma (Figure 2J), and the case was terminated. Final pathology of the wedge resections demonstrated 2 and 3 mm metastatic adenocarcinomas, consistent with colonic origin. The patient ultimately recovered uneventfully with no signs of toxicity from the ICG infusion. 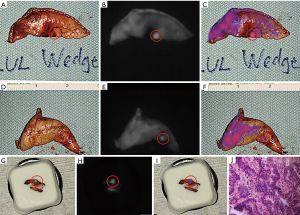 In this report, we demonstrate identification of 2 and 3 mm colorectal cancer pulmonary metastases during VATS using intraoperative NIR imaging. This was accomplished with a commercially available NIR fluorophore (ICG) and camera system (Iridium, Visionsense, Philadelphia, Pennsylvania). Identification of these tiny nodules may have prevented a thoracotomy and was possible at a lower dose of ICG, 3 mg/kg, than we have used previously.

While additional data are being accumulated, these results are nonetheless promising. First, there was no toxicity from the ICG infusion. Second, in the absence of NIR imaging, this patient may have required a thoracotomy with the associated morbidity for manual palpation. In addition, while the procedure was diagnostic for this patient, the sensitivity to detect nodules as small as 2 mm could potentially improve complete resection rates during both VATS and open pulmonary metastasectomy in patients with a limited number of metastases. Third, this case demonstrates the possibility for sampling error during pathology evaluation. As NIR imaging of solid tumors continues to evolve, it is critical that this technology is integrated into the pathology suite. NIR imaging has the potential to improve both the accuracy and efficiency of pathology evaluation. Finally, NIR imaging was possible with a lower ICG dose than we have used previously. If these excellent results can continue to be achieved at a lower ICG dose, it will decrease the cost and may increase the feasibility of widespread acceptance for this new intraoperative imaging modality. It will be critical to evaluate the optimal timing of NIR imaging following administration of lower ICG doses as the current timing has been optimized for a 5 mg/kg dose (9).

NIR imaging is a new technology that requires two innovations: (I) a fluorescent dye that will selectively accumulate in solid tumors and (II) a camera system that can detect the dye. In this case, we used a non-targeted dye, ICG. NIR imaging with ICG has traditionally been used to assess perfusion (10,11). Our group was the first to show that ICG will accumulate in lung nodules when a high dose (5 mg/kg) is given 24 hours prior to surgery (the second window technique) (8). The advantage of second window ICG is its high sensitivity and accumulation in many different cancer types. Second window ICG localizes to tumors by the EPR effect (12-14). This is the concept that tumors have excess but leaky capillaries due to tumor angiogenesis (15). Macromolecules leak from these capillaries into the tumor and are retained due to properties such as size, shape, charge, and polarity (16). ICG, which is only 0.775 kDa, acts as a macromolecule in circulation, where it is 98% albumin bound (17). We have demonstrated in other clinical trials that a folate receptor-targeted NIR agent, OTL38, can improve identification of pulmonary adenocarcinomas (18), and other groups have studied targeted dyes for other malignancies in phase I clinical trials (19,20). However, in this patient with a history of two different primary cancers, the nodules seen on CT could have represented either metastatic colon or lung cancer. Due to different receptor expression, a targeted agent would be unlikely to localize both colon and lung cancers.

We have previously used a variety of intraoperative imaging systems in clinical trials including a small portable interchangeable imager of fluorescence (SPIIF) that we custom made from all readily obtainable parts (21). There are a number of NIR imaging systems that are now commercially available including the system used in this case, and each has advantages and disadvantages related to sensitivity, usability, ability to image fluorescence at multiple wavelengths, and cost (22). As these systems continue to involve, it will be critical to optimize sensitivity without sacrificing specificity, maximize usability, and minimize cost to encourage integration into standard clinical practice.

We acknowledge several limitations related to this case. First, intraoperative NIR imaging continues to be limited by depth of penetration. In previous studies using second window ICG for pulmonary nodule identification, the maximum depth of a nodule detected with NIR imaging was 1.3 cm from the pleural surface as measured on preoperative CT scan (8). Related intraoperative imaging techniques such as multispectral optoacoustic tomography may improve detection of deeper lesions (23). Second, we recognize that the likelihood of progression for radiographic pulmonary nodules less than 5 mm in patients with colorectal cancer is low (24). There is a risk of overtreating isolated pulmonary nodules of this size. However, in cases where multiple small nodules of varying sizes are present, and a diagnostic or therapeutic procedure is warranted, the ability to identify 2–3 mm nodules could improve complete resection rates.

In summary, we demonstrate that NIR imaging 24 hours after infusion of 3 mg/kg ICG can identify 2–3 mm colorectal cancer pulmonary metastases during VATS. This technology has the potential to decrease rates of conversion to open thoracotomy and improve complete resection rates during resection of colorectal cancer pulmonary metastases. We are currently further evaluating the optimal ICG dose for lung nodules in a dose de-escalation trial (NCT02640170).