Lung cancer is a leading global cause of death, not only in developed countries, but also in developing countries (1,2). Analysis of Spanish government databases has shown that lung cancer causes more deaths in Spain that any other type of cancer, accounting for over 20,000 deaths/year and more than 25% of cancer-related deaths (3). These high figures reflect the fact that non-small cell lung cancer (NSCLC) is commonly diagnosed in advanced stages when the prognosis is already usually poor. Lung cancer survival rates are low in most countries with a similar level of access to public healthcare; 5-year survival rates are typically around 15% (4).

Over the last 20 years, changes in the diagnosis and management of lung cancer have given rise to a new approach towards improving survival through more personalized treatment, plus earlier and more accurate diagnosis and staging. These advances have now become widely accepted and implemented by healthcare organizations. They can be classified as changes regarding more accurate diagnosis and staging (PET: positron emission tomography, EBUS-TBNA: endobronchial ultrasound-guided transbronchial needle aspiration, US-TTP: ultrasound-guided transthoracic puncture) (5), and those related to a more personalized approach (including molecular testing for selection of EGFR, epidermal growth factor receptor, and anaplastic lymphoma kinase (ALK), as well as the use of targeted therapies) (6-8). These latest must have yielded improved response and survival rates in patients with advanced NSCLC (9-13).

However, even in the light of recent progress, there is still a lack of data on how these new approaches have been translated into daily clinical practice and whether or not they have improved the prognosis for patients in advanced stages of NSCLC. Some studies have observed changes in the clinical presentation and overall course of NSCLC (14,15), but we are still unaware as to whether those changes affected patient survival.

The aim of this study was to evaluate changes in clinical presentation, diagnosis, and therapeutic schemes among two single-center cohorts with NSCLC patients, and whether these changes have led to an improvement in short-term survival rates over the last 5 years among patients with advanced stages (IIIB and IV) of NSCLC.

This prospective, 1-year follow-up, observational study recruited lung cancer patients treated at our tertiary outpatient clinic. Patients were contacted for follow-ups every 3 months for the first 5 years or until death.

Our main objectives were to compare: (I) the means of diagnosing the lung cancer and the treatment options offered to both cohorts (2011–2013 and 2014–2016); and (II) the 1-year survival rate among patients with advanced stages (IIIB and IV) of NSCLC, again between the two cohorts.

The study included adult patients diagnosed with NSLCL between 2011 and 2016, inclusive, treated at the Hospital Universitario Virgen de las Nieves de Granada. Screened patients should have a diagnosis of lung cancer (whether confirmed by histological analysis or not) and at least 35 years at the age of diagnosis. The hospital provides healthcare assistance to 327,751 people in the South-East Andalusia.

At recruitment, data on cumulative smoking exposure, previous medical history, concomitant diseases, and previous cancer history were collated from each participant’s medical records. Both the types of diagnostic test performed during the initial evaluation and their results were recorded.

We also made a record of each patient’s definitive NSCLC diagnosis (16), the type of NSCLC, and stage according to current guidelines (17). For cohorts’ comparison, patients were classified in localized NSCLC (stages I to IIIA) and advanced NSCLC (IIIB to IV)

Patients were classified according to the type of mutation observed in their histological samples as revealed by molecular testing at diagnosis (6,7,18). Information regarding treatment strategies, surgical interventions, or target-specific therapeutic agents was also collected.

Survival status was assessed every 3 months through either scheduled visits to the hospital or over the telephone. Exact dates of death were collected from the Andalusian Regional Health System’s electronic health records.

Informed consent was obtained from all individual participants included in the study. The study was approved by institutional ethics committee of Granada (No. 17/023).

Mean baseline characteristics for NSCLC patients according to study cohort are presented in Table 1. Briefly, most patients were men in their 60s with a heavy smoking history (a cumulative tobacco consumption history of more than 40 pack/years). Adenocarcinoma was the most frequent histological type of NSCLC followed by squamous cell carcinoma, while changes in cough pattern were the most common symptom observed during the initial evaluation. Most patients were at an advanced stage of the disease at diagnosis (74.6% of the NSCLC sample). 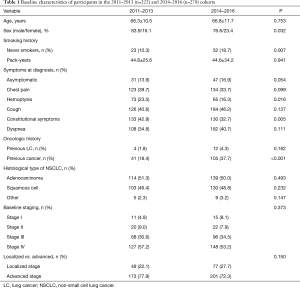 There were statistically significant differences between the two study cohorts in terms of a higher proportion of women in the 2014–2016 cohort, as well as an increase in the proportion of never smokers and patients with a previous history of cancer. However, no significant differences were observed between the two cohorts with regards to baseline staging, the histological type of NSCLC, or the proportion of patients with advanced stages of the disease at the time of diagnosis.

Table 2 summarizes the diagnostic tests performed during the initial evaluation, and the molecular mutations screened at baseline. CT-guided biopsies were standard of care at the time the study was started and were not included in the analysis. There was an increase in the rates of EBUS or US-TTP performed between both cohorts, and a non-significant decrease in the rate of mediastinoscopies needed to confirm the diagnosis. There were no differences in terms of diagnostic rates between both cohorts neither for EBUS-TBNA nor for US-TTP. There were no significant differences between the molecular tests performed in both cohorts or the prevalence of the most important mutations identified in histological samples. 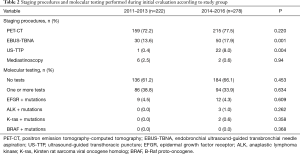 Regarding survival rates, the overall rate of 1-year survival assessed for both cohorts was similar after adjusting for confounding variables (Figure 2). Table 3 summarizes the survival rates between groups and the mean and median time to death for patients with localized and advanced disease. The two cohorts did not present any differences in terms of mean or median survival, or the overall survival in both localized or advanced disease.

The main results of study show that, although the tools and molecular tests used to diagnose patients with NSCLC have improved over the last 5 years, this has not fully translated into an improvement in the real-life situation; neither in terms of the proportion of patients treated with new therapeutic agents, nor in the short-term survival for those with advanced NSCLC. Our results highlight the need to strive for an earlier diagnosis of NSCLC through screening programs and wider access to new chemotherapeutic agents.

We have observed that the evaluation of NSCLC is more accurate, at least at the time of diagnosis, with more techniques, such as EBUS-TBNA and US-TTP, available for the clinician to confirm the extension of the disease. This changes in diagnostic procedures management in NSCLC probably are not expected to impact directly on overall survival but could do so indirectly by shortening the time to initiation of targeted therapies and sparing inappropriate surgical resections. There is a plateau in the use of PET-CT during initial staging, with more than three quarters of patients diagnosed at our region via a PET-CT scan. The results also show some changes in the symptoms presented at diagnosis, with a reduction in the proportion of patients with hemoptysis or constitutional symptoms. This could reflect a slight increase in the general population’s awareness of lung cancer. However, only a small proportion of patients manifested localized NSCLC at the time of diagnosis. This finding is in line with previous Spanish studies that reported changes in the symptoms present at initial NSCLC diagnosis (14) in this decade, and also with other results reported in other countries (15,19).

Survival analysis carried out in both the 2011–2013 and 2014–2016 cohorts did not reveal any improvements in short-term survival for patients with advanced stages of NSCLC in terms of both overall and median survival, although Cox proportional hazards regression modelling showed that patients treated with TKI had an increased OR for survival. This concurs with results from randomized controlled trials examining survival benefit in patients with EGFR mutations (10,20). The authors did not observe any effect from other new agents (i.e., ALK inhibitors), but this could be explained by the lower tumor mutation rates in our series and also by the fact that some of the treatments (e.g., anti-PD1 inhibitors) were not widely used at that time. Another issue that has been observed is the low molecular testing workup in both cohorts, this could have been explained by small sampling or that many patients were referred for palliative care.

We are obliged to point out the weaknesses in our study, the most important being that we only recorded first-line treatments, and some effects of second-line options may have gone undetected. Another defect is that we only recorded overall survival, not time to disease progression, as this parameter is recorded by oncologists and the information was not available at the time of the follow-up visits. Another limitation is the absence of registration of comorbidities, which could have biased our results (21). Moreover, our study population is relatively small so it could be possible that smaller survival rates could not be detected. It is possible that a longer follow up could have detected treatment effect on survival rates too.

In summary, NSCLC diagnosis and treatment has changed over the last years, not only due to improved techniques which can better characterize the initial disease extension, but also because of greater access to new therapeutic options; some of these factors improve the likelihood of survival during the follow-up period.

This article is associated with the doctoral thesis of the main author, linked to the University of Granada.

Ethical Statement: The study was approved by institutional ethics committee of Granada (No. 17/023) and the informed consent was obtained from all individual participants included in the study.