Lung cancer is the commonest cancer in the world (1). About 600,000 patients in China are newly diagnosed with lung cancer each year (2). Early diagnosis of lung cancer can significantly prolong survival time (3,4).

Low-dose computed tomography (LDCT) has been recommended as a routine screening for lung cancer high risk patients (4). With the using of LDCT, the detection rate of lung nodules has increased year by year in China (5). Radiology doctors preliminary differentiate benign and malignant by the density, size and shape, etc. of the pulmonary nodules (6). LDCT has a high false positive rate (5,7). Some benign disease, such as sarcoidosis, atypical pneumonia, pulmonary tuberculosis, etc. could be diagnosed as malignant by radiology doctors (8). The accuracy rate of LDCT is also related to the level of doctors. Different doctors may make different judgments on the same pulmonary nodule. It is important to find a marker that can improve the diagnostic accuracy of CT. It was reported (9). It was reported that serum microRNAs (miRNAs) (10,11), autoantibodies, circulating tumor cells (12,13), and DNA methylation (14), and so on (15,16) could assist the diagnosis of pulmonary nodules.

miRNAs could aid to early diagnosis of cancer (15). By using a panel of six-miRNA panel (miR-429, miR-205, miR-200b, miR-203, miR-125b and miR-34b) in 51 lung cancer patients, the six-miRNA panel could serve as a supplement tool for CT screening (17). Nadal et al. used a panel of four miRNAs (miR-193b, miR-301, miR-141 and miR-200b) and found four-miRNA panel discriminating lung cancer from the normal lung disease (18). These results suggested miRNAs panel test might be able to detect lung cancer. In our previously study, we developed a miRNAs panel that could aid the diagnosis of lung adenocarcinoma presenting with glass ground nodules (GGNs) by next-generation sequencing (NGS) (11). But in our previous study, the sample size was small. In this study, we expanded our sample size and used the miRNAs panel to aid CT scan. We aimed to evaluate the diagnosis accuracy of LDCT imaging combining with the miRNA panel in lung nodules.

From October 2015 to February 2017, 369 hospitalized patients presenting pulmonary nodules were enrolled into this study from Shanghai Pulmonary Hospital, Tongji University. Patient samples were collected in 3.8% sodium citrate tubes. When the lung nodules were detected by CT scan, we got patient blood samples in 2 days. Most serum samples were collected within 2 days prior to the test. Samples were stored at −80 °C. Serum miRNAs were detected by reverse transcription-polymerase chain reaction (RT-PCR). Blood were collected before diagnosis and treatment. All participants provided written informed consent. All patients were diagnosed by pathology. The protocol was approved by the Shanghai Pulmonary Hospital, Tongji University (issue number 13-786, ethical number 13-768).

We used RT-PCR to detect the miRNA panel (hsa-miR-199a-3p, hsa-miR-148a-3p, hsa-miR-210-3p, hsa-miR-378d and hsa-miR-138-5p). Relative Ct values were normalized using the U6 Ct value. Data were analyzed with the 2−ΔΔCt formula, where ΔCt = (CTmiRNA − CTU6). Each reaction was performed in triplicate. The method was mentioned in our published paper (11). The miRNA cutoff chose the miRNA 2−ΔΔCt formula value best predicted the accuracy.

We did the analyses by SPSS (version 17.0, Chicago, IL, USA). We used χ2 tests to analyze the correlations of accuracy in different clinical parameters. P values <0.05 (two sides) were significant. 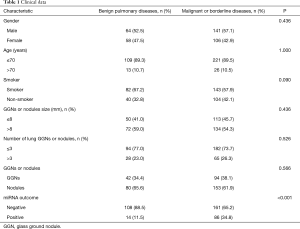 The total specificity of miRNAs panel was 90.2% in benign lung diseases.

We did sub-analysis in patients with lung cancer, the miRNAs results were non-significant difference between sex, age, smoke status, GGNs or nodules type, and number of pulmonary nodules. The miRNAs panel positive rate was significant higher in lung GGNs or nodules patients >8 mm than in patients ≤8 mm (P=0.007). The positive rate of miRNAs panel in nodules group was not significantly higher than that in GGN group (P=0.128) (Table 3). 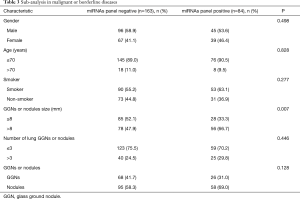 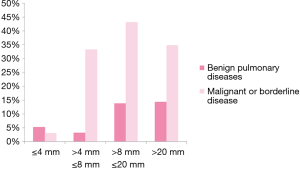 More patients did the CT screening, more pulmonary nodules were found (19). CT could even detect small nodules less than one centimeter. In a large-scale study, it was pointed out that the possibility of malignancy was positively correlated with the size of the nodules (7). The Mayo Clinic CT Screening Trial reported that the nodules less than 8mm had a lower malignant rate (20). The same results were also reported by Henschke et al. (21). Although the malignancy rate of small nodules is lower, there are still many small nodules are malignant, while large nodules are benign. Pathology is the gold standard for the diagnosis of pulmonary nodules. Needle biopsy in lung small nodules is a challenge for doctors, and the positive rate is relatively low. Given a great amount of benign nodules detected by CT scan, it is very important to find a non-invasive test which can aid CT scan to distinguish malignant diseases from benign diseases.

Liquid biopsy can assist in the diagnosis of cancer (10,22,23). Cancer-associated miRNAs, autoantibodies, circulating tumor cells, and DNA methylation could be detected in patient serum, urine and plasma (10,22,23). In our previously study, we found a miRNAs panel that could predict lung adenocarcinoma in GGNs patients (11). This study is to discuss the value of miRNA in assisting CT in the diagnosis of pulmonary nodules and provided the data to prove the value of using miRNA panel as biomarkers to distinguish benign nodules from malignant nodules when CT scan can only provide a rough morphology.

miRNA can be used for early diagnosis of lung cancer. In this study, we found combining miRNAs panel with LDCT scan could improve the specificity of LDCT in pulmonary nodules patients. Here we reported a miRNAs panel in patients with pulmonary nodules. The sizes between malignant and benign nodules were not significantly different. It was unreliable to judge the feature of nodules based on CT alone. Additional detection method to aid CT was needed for nodule diagnosis. In our study, 369 patient blood samples were tested by miRNAs panel. Specificity of miRNAs test was 90.2% for benign pulmonary diseases. Sensitivities of miRNAs test were 15.2%, 34.5%, 44.7%, and 22.2% in atypical adenomatous hyperplasia, adenocarcinoma in situ, adenocarcinoma, and other pathologies of lung cancer. All the patients were the hospital patients. More than 30% pulmonary nodules patients were diagnosed as the benign diseases. This study found the miRNAs panel could reduce the false positive rate of CT scan. Theoretically, miRNAs are released to the blood during growth of adenocarcinoma in situ and infiltration of cancer cells, this study suggested miRNAs panel test was a promising method for lung cancer patients with small- to medium-size pulmonary nodules. It provides a novel approach for distinguishing lung cancer from benign pulmonary diseases when CT imaging result is equivocal.

Ethical Statement: The study was approved by the Shanghai Pulmonary Hospital, Tongji University (issue number 13-786, ethical number 13-768) and written informed consent was obtained from all patients.