The growth speed of primary lung cancer (PLC) reflects its malignant nature and is closely associated with prognosis (1-6). The time taken for a tumor to double in volume, volume doubling time (VDT), is a classical indicator of PLC proliferation and is also associated with histology and prognosis (2-8). A short VDT means rapid growth of the tumor and represents its malignant potential. A VDT less than 400 days has been suggested as a cutoff value to distinguish a benign from a malignant lesion (8,9). VDT is one of the key parameters to distinguish aggressive tumors from indolent ones.

Solid components of PLCs on high resolution computed tomography (HRCT) images represent their invasive potential and are associated with rapid growth (5-8,10). In contrast, ground glass opacity (GGO) components suggest a longer VDT and good outcome, such as in adenocarcinoma in situ and minimally invasive adenocarcinoma (10,11). It is considered that radiologically solid PLCs show rapid growth compared with GGO lesion, however, it is unclear if the growth speed of the solid component of part-solid nodules differs from that of pure solid nodules. Also, differences in VDT of radiologically solid PLCs according to histology have not yet been sufficiently explored. The main objective of this study was to compare difference in VDTs according to PLC histology, and the secondary objective was to compare difference in VDTs of PLCs with and without GGO components.

In this retrospective study, data of patients with PLC who had undergone surgical resection from 2003 through 2015 in our institute were investigated. Only patients who had undergone at least two preoperative CT scans at intervals of more than 21 days were included, leaving 371 eligible patients. All tumors were pathologically confirmed as PLCs. Histological classification was determined according to the fourth edition of the World Health Organization classification of lung tumors (12). The tumor, node and metastases staging system of the seventh edition of the American Joint Committee for Cancer Staging System was used (13). Clinical information, including age, sex, smoking history, tumor histology, pathological stage, tumor diameter, and VDT were collected from patient records for analysis. This study was approved in January 2017 by the Institutional Review Board for clinical trials of Gunma University (IRB approval number 1575). This study was conducted in accordance with the Declaration of Helsinki Principles.

CT examinations and measurement of lesions

All CT scans were performed on a 64-channel multi-detector row computed tomography (SOMATOM Definition Flash; Siemens Healthcare, Berlin, Germany). CT scans were performed on each tumor at least twice before surgery. CT images were reconstructed with a window level of 500 to 700 HU and a window width of 1,000 to 2,000 HU as lung window settings. Thin-section CT images were obtained at 1.0–2.0 mm thicknesses using a high spatial frequency reconstruction algorithm. The maximum diameter of the entire tumor, which included both GGO and consolidation components, and the maximum diameter of the consolidation component alone were measured separately on an axial CT slice that showed the longest diameter. Diameter values were measured manually using a computer workstation. GGO was defined as an area of slight increase in CT density that did not obscure lung structures such as pulmonary vessels and bronchi. Consolidation was defined as an area of homogenous increase in CT density that obscured these lung structures (14). A consolidation/tumor ratio (CTR) was calculated for each tumor by dividing the maximum diameter of consolidation by that of the entire tumor.

Tumor diameters were measured separately by two thoracic surgeons; in cases of discrepancies between measured sizes, the arithmetic mean of these diameters was used. VDTs were calculated both for the entire tumor diameter and the diameter of consolidation alone, using the approximation formula of Schwartz (15) (Figure S1). 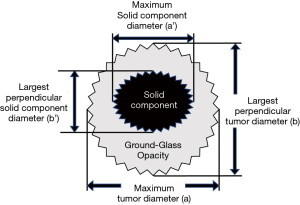 Statistical analysis of correlations between VDT and clinicopathological factors

There were 397 PLC patients who had undergone surgical resection during the described period, amongst which 371 had undergone the two preoperative CT scans. The clinicopathological characteristics of these 371 patients with PLCs are shown in Table 1. 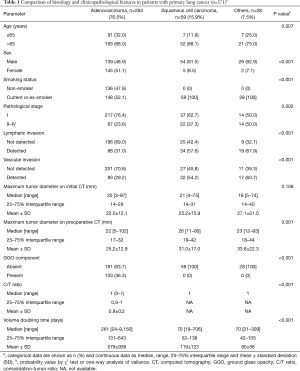 Table 1 also shows patient characteristics according to tumor histology. Patients with AC were significantly younger (P=0.007), and included more women (P<0.001) and more non-smokers (P<0.001) than patients with squamous cell carcinoma and other histologies. On pathological examination, significantly more early stage disease (P<0.001) and less lymphatic/vascular invasion was observed in the adenocarcinoma group than in the other two histology groups. The initial tumor sizes on CT were mostly the same among the three histology groups; however, squamous cell carcinomas and others showed significantly greater increases in size on the CTs taken immediately preoperatively (P<0.001). 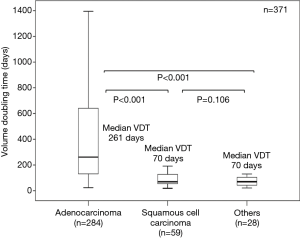 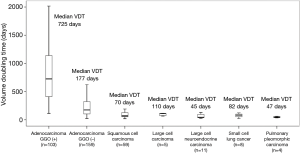 Several limitations of our study should be mentioned. First, there may have been a selection bias because this is a retrospective single-institution study, enrolling only patients who had undergone surgical resection. Second, the median interval between initial CT and preoperative CT and median duration of follow-up were relatively short, which may have allowed measurement errors for slow-growing tumors, especially GGO adenocarcinomas, because of their indolent nature. Third, volume measurements were derived from the results of manual segmentation and an approximation formula; thus, calculated volumes could have differed from the actual volumes.

Funding: This work was supported by the Grants-in-Aid for Scientific Research from the Japan Society for the Promotion of Science (grant numbers 22590516 and 19390359).

Ethical Statement: This study was approved in January 2017 by the Institutional Review Board for clinical trials of Gunma University (IRB approval number 1575). This study was conducted in accordance with the Declaration of Helsinki Principles.