Bronchiectasis is a debilitating chronic inflammatory airway disease which arises from multiple etiologies. The interplay among the etiology, altered microenvironment and defective host-defense may have predisposed to recurrent chest infections of pathogens (1,2) that correlate with bronchiectasis exacerbations and increased mortality. Sputum production, which results from mucus hypersecretion and exaggerated airway inflammation, is one of the major complaints among symptomatic bronchiectasis patients (3) whose sputum bacterial compositions are heterogeneous (4,5). Clinically, sputum purulence has been an important parameter reflecting the magnitude of airway inflammation and infection. Sputum purulence, which is commonly rated by using color charts in clinical settings, has been correlated with sputum myeloperoxidase and neutrophil elastase activity and pathogen (i.e., pathogenic bacteria) infections (6,7).

Conventionally, physicians prescribed antibiotics based on sputum purulence in conjunction with assessment of clinical symptoms such as sputum volume and cough frequency. Nonetheless, antibiotics are frequently prescribed to bronchiectasis patients (particularly those with purulent sputum) regardless of culture findings in many developing countries (such as China). Some patients with purulent sputum tested negative for bacterial culture, suggesting that culture techniques have limited value for identifying pathogenic bacteria. Little is known regarding bacterial compositions associated with purulent sputum in bronchiectasis. Studies that comprehensively characterize microbial compositions according to purulence are needed to inform physicians in which subgroup should antibiotic prescription be prioritized.

We hypothesized that sputum purulence partially correlated with the sputum microbial compositions and that sputum purulence was not solely responsible for interpreting the variations in microbial compositions in patients with clinically stable bronchiectasis and during bronchiectasis exacerbations. In this study, we sought to compare bacterial compositions between purulent and non-purulent sputum, and between culture-positive and -negative purulent sputum, followed by comparison of changes in bacterial diversity during exacerbations with 16srRNA sequencing (8,9).

Adults with bronchiectasis confirmed with high-resolution computed tomography (effective within 12 months, reviewed by an experienced radiologist) were consecutively recruited between March 2014 and November 2015. The criteria for diagnosing bronchiectasis have been published previously (3). Patients were free from exacerbations for >4 weeks (4). We excluded patients with malignancy, upper airway bacterial/viral infection, or antibiotic use (except for the low-dose maintenance therapy with macrolides) within 4 weeks. Our local ethics committee gave approval Medical Ethics Year 2012 (The 33rd), and patients signed informed consent.

Nucleic acids were extracted using physical disruption (vortex) and centrifugal absorption column (HiPure DNA Kit B, Magen Inc., Guangzhou, China). Quality control of the samples was achieved via agarose gel electrophoresis and ND-100 Nanodrop system (Thermo Fisher Inc., USA). Qualified samples were subject to library construction with TruSeqTM Custom Amplicon Sample Prep Kit (Illumina Inc., USA), and barcoded and mixed before pooling. The quality of the library was assessed with Agilent 2200 TapeStation (Agilent Inc., USA) and Qubit 2.0 (ThermoFisher Inc., USA). 2.1nM Phix Control (19:1) and sodium hydroxide were added for incubation of the sample, followed by dilution with HT1 solution (1:100). We performed DNA sequencing with Miseq System (Illumina Inc., USA). Raw reads were denoised, followed by chimera removal. High-quality sequences were clustered into operational taxonomic units (OTUs) at 97% similarity with UCLUST software. The sequences for individual OTU were aligned with BLASTn, and the taxonomic identities were assigned by using Ribosomal Database Project classifier (version 2.2). The QIMME software was employed for rarefaction of the denoised files, which enabled subsequent calculation of the relative abundance and the diversity metrics. Sequences were deposited in GenBank under accession number SAMN06768146-SAMN06768292.

We performed analyses with R package (www.r-project.org) and Graphpad Prism 5.0 (Graphpad Inc., San Diego, USA). We classified patients into the group with mucoid or mucopurulent sputum (M+MP, n=16), culture-negative (no pathogenic bacteria) purulent sputum (C−P+, n=16), and culture-positive purulent sputum (C+P+, n=73). Group M+MP was not stratified because of limited sample sizes. One-way analysis-of-variance or Kruskal-Wallis test was applied for the comparison of three groups for continuous variables, followed by least-square difference test for two-group comparisons. We used independent t-tests or Wilcoxon signed-rank tests to compare the continuous variables between the two groups. Paired t-tests were conducted for the pairwise sputum samples. Categorical variables were compared with chi-square test. We compared the relative abundance and Shannon-Wiener diversity index (an alpha-metric reflecting the number of types of sequences within any individual sample) to reflect the magnitude of dysbiosis (altered microbial compositions in response to external stimuli such as disease). We ran similarity of percentage analysis with Community Analysis Package version 5.3.3.472 (Hampshire, UK).

Of 207 patients screened, 105 with spontaneous sputa had available purulence scores (64 patients declined and 38 produced insufficient sputum). Median purulence score was 6.0 (range, 1.0–8.0). 85 patients cultured positive to pathogenic bacteria (42.9% isolated Pseudomonas aeruginosa). Idiopathic (32.3%) and post-infectious (37.1%) were the most common etiologies. Twenty five percent, 25.0% and 12.3% of the patients in M+MP, C−P+, and C+P+ group had been prescribed with inhaled corticosteroids within 6 months (P>0.05), respectively. No patients were receiving oral/inhaled antibiotics. Bronchiectasis Severity Index was significantly higher in group C+P+ (mean: 6.8) than in groups M+MP and C−P+ (mean: 3.8 and 4.8, P=0.005) (Table 1). Twenty-two patients attended exacerbation visits (5, 4 and 13 in group M+MP, C−P+, and C+P+, respectively), of whom 20 participated in convalescence visits. 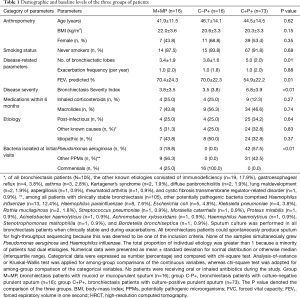 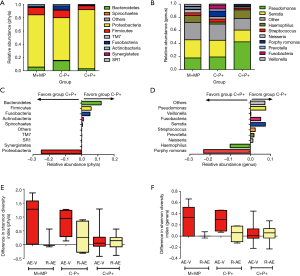 Although groups C−P+ plus C+P+ differed considerably from group M+MP in microbial compositions, sputum purulence scores correlated with the abundance of Proteobacteria and most genera (including Pseudomonas spp.) and Shannon-Wiener diversity index, at phyla and genera levels (data not shown).

We compared microbial compositions of sputum samples when clinically stable and during exacerbation, and from exacerbation to convalescence. A trend towards greater differences in Shannon-Wiener diversity index was observed in groups M+MP and C−P+ at phyla and genera levels (Figure 2E,F). No significant differences were found in the abundance of Proteobacteria and Pseudomonas spp. when comparing paired samples collected when clinically stable and during exacerbations (P>0.05).

In this study, we have demonstrated that bronchiectasis patients with purulent sputum and isolation with pathogenic bacteria had considerably greater magnitude of airway dysbiosis, particularly when assessed in terms of the relative abundance of Proteobacteria and the alpha-diversity index. We have confirmed some of the findings from a previous study that sputum purulence was a strong predictor of potentially pathogenic microorganisms (PPM) infection (11). Furthermore, our study partially echoed the findings that sputum purulence correlated with pathogenic bacterial infection in hospitalized patients with COPD exacerbations (12). Nonetheless, our study has further revealed a considerable heterogeneity of microbial compositions even within the subgroups classified according to sputum culture findings and purulence. Notably, sputum microbial compositions do not solely depend on sputum culture positivity. A considerable heterogeneity in microbial compositions could be found among individual bronchiectasis patients within the same subgroup (i.e., culture-positive or culture-negative group) (data not shown).

Focusing solely on purulent sputum in clinically stable bronchiectasis, microbial compositions varied substantially among individuals (e.g., the abundance of Proteobacteria and Pseudomonas spp. was 8.6~84.6% and 1.5~92.2%). Only those with purulent culture-positive sputum, which demonstrated minimal changes in bacterial diversity during exacerbations, displayed the most prominent degree of airway dysbiosis. These findings reaffirmed that sputum purulence alone was not the sole dependent factor that influences on microbial compositions. Importantly, our study suggested that stratification of patients based on the combination of sputum purulence and culture findings may help better elucidate the characteristics of airway dysbiosis and explore the possible source of variation in sputum microbial compositions. Therefore, sputum purulence and culture findings might have complementary value for guidance of antibiotics prescription in the clinical settings. In some patients, the minor degree of airway dysbiosis indicated the alternative sources of sputum purulence (13), such as exaggerated elastase release. According to another study, outgrowth of Proteobacteria and/or Pseudomonas spp. contributes to more prominent dysbiosis (14), whereas Haemophilus spp. and Serratia spp. counter the expansion of Pseudomonas spp. Our study has partially corroborated with these findings, and has further indicated the potential association between sputum purulence and outgrowth of Proteobacteria and/or Pseudomonas spp. in some, but not all, of the purulent sputum samples.

There are some limitations that should be considered. Some of the subgroup analysis might be not sufficiently powered because of the limited sample sizes. The sample size for the subgroups was unbalanced. Patients aged on average lower compared with the populations in other geographic regions. Our findings might not be completely extrapolated to patients in other countries because of the high relative abundance of Proteobacteria and Serratia and the low relative abundance of Haemophilus spp. We did not measure clinically relevant markers (i.e., neutrophil elastase activity) that have been correlated with sputum purulence. Finally, bronchiectasis exacerbations are highly heterogeneous events which indicated significant variations in sputum microbial compositions that cannot be adequately addressed based on the current study design.