Asthma-like symptoms induced by the methacholine challenge test: do they predict a negative-to-positive switch in the test result?—case report

The methacholine challenge test (MCT) is primarily indicated to help determine if current respiratory symptoms may be due to asthma or not (1,2). A positive test is generally defined as the provocative concentration (or dose) of methacholine causing a 20% fall in forced expiratory volume in one second (PC20FEV1) without consideration of the symptoms that may occur during the test, such as dyspnoea, cough, chest tightness and wheezing (2). In a population of adults with suspected asthma, we previously found that 38% (16/42) of methacholine non-responders experienced asthma-like symptoms during the test (3). Using a continuous measure of responsiveness—the methacholine concentration-response slope (MCRS)—we found these so-called “symptomatic non-responders” (SNRs) had increased airway responsiveness below the 20% threshold of fall in FEV1 (3). We hypothesized that this subtle abnormality of responsiveness, which is beyond the reach of the PC20FEV1, might be a risk factor for overt airway hyperresponsiveness (AHR) (and asthma) at a later stage. While awaiting long-term follow-up studies necessary to test this possibility, herein we report 2 of the 16 SNRs from our original series, who underwent a second MCT two months after the first one. In both patients, the test result switched from negative—a result supposed to rule out asthma—to positive—a result supporting the diagnosis of asthma—while reproducing the symptoms justifying referral on both occasions.

All methods were described in detail previously (3). Briefly, the MCT was performed using the 2-minute tidal breathing protocol (1,2). Spirometry followed the ATS recommendations (4). Symptoms during the MCT were assessed categorically (yes/no) at baseline and immediately after each methacholine inhalation using the ATS questionnaire (2). Wheeze sounds were assessed by tracheal auscultation (5). Finally, the MCRS was computed using a mixed model taking in account all points of the curve (3).

A 19-year-old male was referred by his care-provider to our laboratory for MCT because of episodes of dyspnoea, cough and wheezing. He was a non-smoker with a negative history of allergies or family asthma. He reported a personal history of unconfirmed childhood asthma treated by the family physician with salbutamol prn. The symptoms remitted almost completely during adolescence only to reappear at his place of work—considered “very dusty”—prompting the addition (by the family physician) of inhaled corticosteroids (ICS) (fluticasone propionate 250 mcg 2× daily) to the therapeutic regimen

Upon arrival, the patient was asymptomatic with no wheezes heard on auscultation. Inhalation of the first methacholine aerosols elicited neither symptoms nor changes in the FEV1. Inhalation of the 0.125 mg/mL methacholine concentration triggered dyspnoea, accompanied by a 1.9% fall in FEV1 from baseline. The dyspnoea intensified following subsequent methacholine inhalations up to the end of the challenge. The subject considered the symptoms similar to those he felt previously. At end-test, the FEV1 had fallen by 17.3%. Following the inhalation of salbutamol, symptoms abated and the FEV1 rose back to the baseline value.

The subject’s MCRS (red curve) was qualitatively steeper than that of a healthy control taken for comparison (green curve) (Figure 1). Of note, the subject’s MCRS started deviating from that of the control subject one methacholine concentration prior to the onset of dyspnoea, which persisted until the end-test. 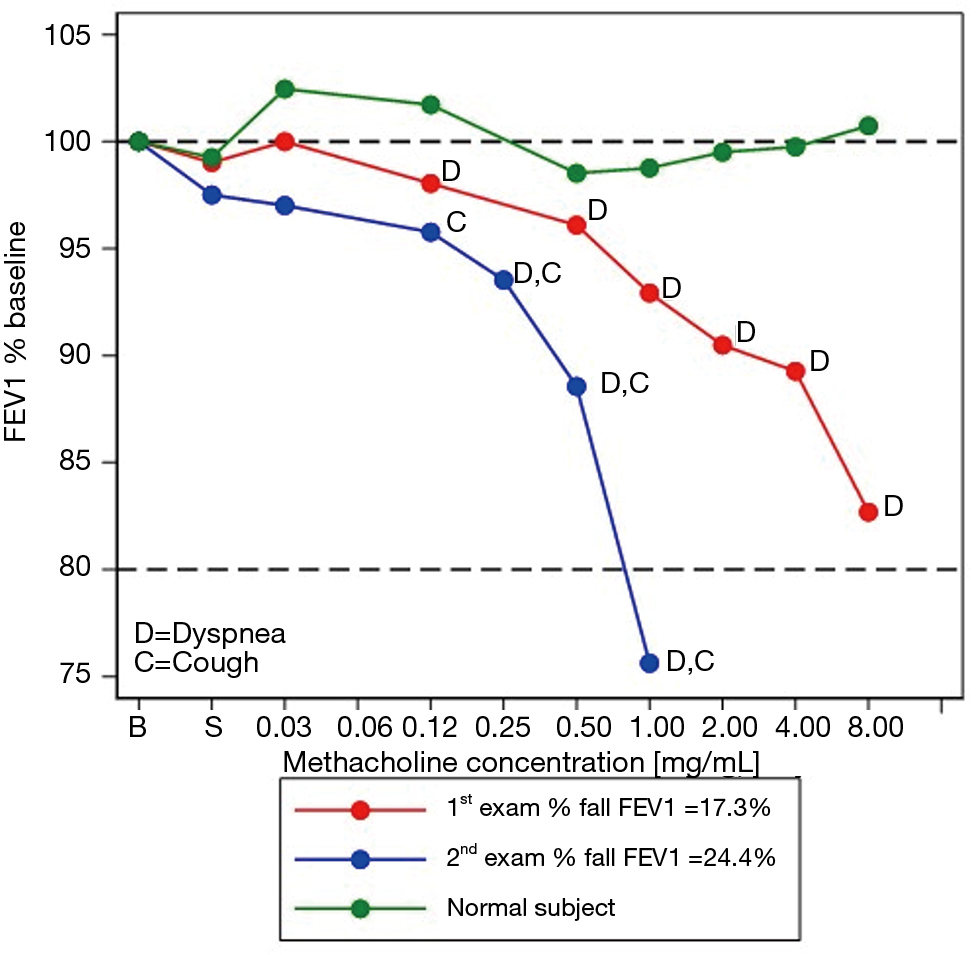 Figure 1 Relationship between symptom appearance and airway responsiveness in patient #1. MCT#1: the MCRS (red curve) tends to be horizontal during the inhalation of the first methacholine concentrations. At the third concentration, coinciding with the onset of dyspnea (D), the curve becomes much steeper than that of a young, healthy asymptomatic control subject (green curve), in presence of a sub-threshold (i.e., <20%) fall in FEV1 at end-test. MCT#2: The MCRS (blue curve) is much steeper than in MCT#1 again coinciding with the onset of symptoms of cough (C) and dyspnea (D). FEV1, forced expiratory volume in one second; MCRS, methacholine concentration-response slope; MCT, methacholine challenge test.

Daily life symptoms persisted so seven weeks later the patient was referred for repeat MCT. At baseline, he was asymptomatic with normal auscultation. Initially, methacholine inhalation did not elicit symptoms or changes in FEV1. Following the inhalation of the 0.125 mg/mL methacholine concentration, however, dyspnoea and cough developed, while the FEV1 fell 4% from baseline. Subsequently, these symptoms persisted and intensified, while the FEV1 fell by 24% from baseline after the inhalation of the 1.0 mg/mL methacholine concentration, prompting the termination of the test. Once again, the patient considered the symptoms similar to those he felt previously. In agreement with the marked fall in FEV1, the MCRS (blue curve) was qualitatively much steeper than that observed at MCT#1 (red curve) (Figure 1). After bronchodilator administration, the symptoms disappeared altogether, while the FEV1 rose back to baseline value.

An 18-year-old male was referred to our laboratory for MCT because of episodes of dyspnoea and wheezing, triggered both by exposure to dust and by physical exertion. The symptoms manifested from babyhood up to age 12, when they disappeared altogether. The family physician diagnosed asthma—not confirmed by demonstration of reversible airflow obstruction and prescribed salbutamol prn. The patient reported one hospitalization for wheezing as a child. A cigarette non-smoker, he admitted smoking water pipe occasionally, but abandoned this habit since the recrudescence of the respiratory symptoms.

Baseline spirometry and auscultation were normal. Inhalation of the 0.125 mg/mL methacholine concentration elicited dyspnoea followed two challenge steps later by wheezing on auscultation. The symptoms accentuated and persisted up to the inhalation of the last concentration of methacholine; however, at that point, the concomitant FEV1 had fallen only by 3.7% below baseline. He recognized the symptoms as similar to those of daily life. After bronchodilator inhalation, the symptoms vanished and the FEV1 increased by 90 mL above the baseline value. 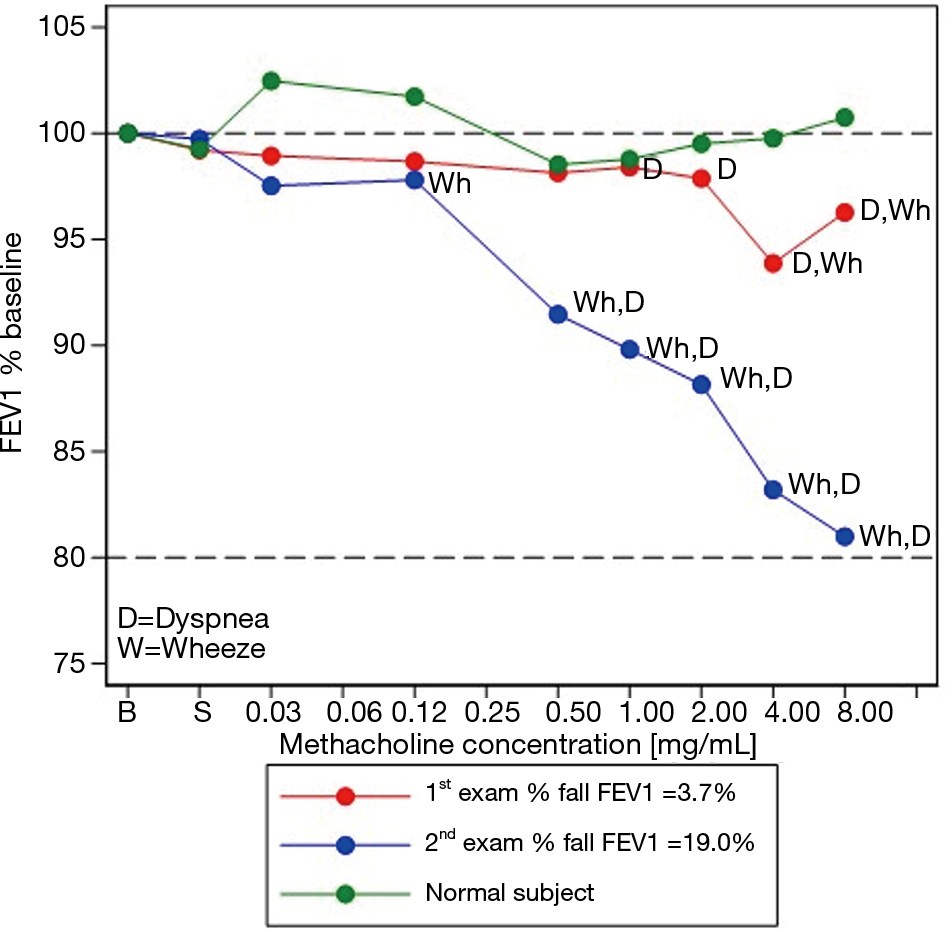 As his condition persisted, nine weeks later a repeat MCT was performed. His only medication was salbutamol prn. Baseline spirometry and auscultation were normal. Wheezes—detected by auscultation but unnoticed by the patient—were perceived immediately after the inhalation of the 0.125 mg/mL methacholine concentration; simultaneously the FEV1 fell by 2.8% below baseline. Subsequent methacholine inhalations intensified the dyspnoea while wheezing became audible across the room. The patient considered the symptoms similar to those of daily life. Following the inhalation of the last concentration of methacholine, the FEV1 was 19% below baseline (rounded to 20%). After bronchodilator inhalation, symptoms abated, wheezes disappeared, and the spirometry returned to normal.

As shown in Figure 2, the subject’s MCRS curve departed from that of the healthy control very early, after the inhalation of the 0.125 mg/mL methacholine concentration. This coincided with the onset of wheezes, which persisted up to the end of the test. Table 1 summarizes the MCT-related data of the two patients.

The utility of the MCT to assist in diagnosing asthma depends on both the test result and the pre-test probability (PTP) of asthma. Based on clinical history, the PTP of our patients was considered to be in the optimal range of efficiency of the MCT (i.e., 30–70%, for PC20 cut-off values 8–16 mg/mL) (1, 2).

In our patients, the inhalation of methacholine reproduced symptoms of daily life on two occasions, two months apart. In a consistent manner, symptoms started at negligible levels of fall in FEV1 and persisted throughout the challenge, irrespective of the test result. This finding suggests that methacholine-induced symptoms may occur across a range of levels of fall in FEV1, and not only when the 20% threshold of fall is reached. This interpretation is in keeping with studies showing a continuous increase in the risk of asthma symptoms with increasing responsiveness both above and below the threshold of AHR (i.e., 20% fall in FEV1) (6,7). Incidentally, there is evidence that non-obstructive mechanisms such as dynamic hyperinflation and the stimulation of vagal irritant receptors might produce symptoms of cough, dyspnoea and chest tightness (8-10). As for wheezes, although their generation always requires airflow limitation, this occurs at a local level in the airways so they can co-exist with little or no change in FEV1 (5).

Several factors could explain the switch in the responsiveness status of our patients. For instance, MCT#2 could have turned positive because of a decrease in baseline airway calibre compared with MCT#1; however, Table 1 shows this was not the case. A second possibility is that the MCT#1 was falsely negative in both patients. Indeed, there is evidence that the FEV1 is a less sensitive detector of changes in airway calibre than indices of airway patency obtained during quiet breathing such as the specific conductance (SGaw) or forced oscillation parameters (11,12). Additionally, in theory, exposure to methacholine during the first provocation test could have induced a greater bronchial response during the second test. Indeed, a recent study in neonatal piglets showed that a single prior exposure to methacholine induced AHR and low-level inflammation during a subsequent methacholine challenge, two days later (13). However, although it cannot be ruled out with certainty, this mechanism cannot explain the asthma-like symptoms experienced by our patients before the first MCT, which motivated referral for MCT. A final, more attractive possibility, is the effect of airway inflammation on the variable component of AHR, as seen in asthmatics following single high-dose allergen exposure, repeated low-dose allergen exposure, or even spontaneously (14,15). This could be the explanation if, for instance, our patients were true asthmatics from childhood, whose asthma—remitted in adolescence—was “awakened” by dust exposure. In this scenario, the pursuit between the two MCTs of this exposure could have caused fluctuations in the extent of the underlying inflammation, enhancing the AHR already present and, ultimately, leading to the MCT negative-to-positive switch (14,15). Two types of studies support the plausibility of this mechanism. The first showed that a large proportion of methacholine non-responders who reported asthma-like symptoms developed overt asthma over a 3-year period (16). The second showed a marked improvement in symptoms and the disappearance of wheeze in methacholine non-responders receiving treatment with high doses of fluticasone (17).

Labelling a subject “methacholine non-responder” has clinical implications. Firstly, because the negative predictive value of the MCT is greater than its positive predictive value, a negative test is considered to virtually rule out asthma (1,2). Secondly, a negative test in patients with ongoing respiratory symptoms is an indication for implementing lengthy, and oftentimes costly, work-up for other asthma-like syndromes (e.g., hyperventilation syndrome, non-asthmatic eosinophilic bronchitis, vocal cord dysfunction…). In this regard, our cases teach us two lessons. First, putting all methacholine non-responders in the same bag could be misleading and even detrimental to the patients. Second, methacholine non-responders experiencing asthma-like symptoms during the methacholine test—especially if such symptoms are similar to those motivating the test—might represent a specific phenotype at risk for the development of overt AHR (and asthma) at a later stage. Long-term follow-up studies are necessary to test this possibility.

The authors thank Mrs. Ahouva Tesama for her technical assistance in performing the methacholine challenge tests.

Informed Consent: Written informed consent was obtained from the patients for publication of this case report.