Transfemoral transcatheter aortic valve implantation using a self-expandable valve in a patient with an aortobiiliac bypass graft: a case report

Among the access routes for transcatheter aortic valve implantation (TAVI), the transfemoral (TF) approach is more effective than alternative approaches, including transapical, trans-subclavian, and direct aortic procedures (1). Considering peripheral artery disease is reportedly a major comorbidity in patients referred for TAVI (2), we may often face challenges in completing the TF-TAVI procedure in patients with comorbidities associated with femoral access routes such as the aorta or iliofemoral arteries with severe calcification, tortuosity, narrowing or an aneurysm, shaggy aorta, or an artificial bypass graft. Limited studies have highlighted the achievement of TF-TAVI using a Sapien XT balloon-expandable valve (Edwards Lifesciences, Irvine, CA, USA) in patients with aortobiiliac bypass grafts (3). To the best of our knowledge, we are the first to report a case of successful TF-TAVI using an Evolut R self-expandable valve (Medtronic, Inc., Minneapolis, MN, USA) for symptomatic severe aortic stenosis in a patient with an aortobiiliac bypass graft.

A 72-year-old female presented with chronic heart failure (New York Heart Association classification 2), and 9 months prior to admission, she had undergone aortobiiliac bypass grafting via an end-to-side anastomosis using a Hemashield aortobiiliac bypass graft (Maquet Cardiovascular, San Jose, CA, USA) with a 16- and 9-mm-diameter body and limb, respectively. Echocardiography revealed a left ventricular ejection fraction of 64%, an aortic valve area of 0.87 cm2, a peak transvalvular velocity of 3.75 m/s, and moderate aortic regurgitation. Coronary angiography revealed severe stenosis in the dominant left circumflex coronary artery and ostial occlusion of the hypoplastic right coronary artery. Because her STS-PROM score was 7.667%, the patient was considered for TAVI.

Contrast-enhanced computed tomography revealed a porcelain aorta and left subclavian artery stenosis (Figure 1A); therefore, the feasibility of TF-TAVI warranted assessment. The aortobiiliac bypass graft body, bilateral limbs, and anastomoses were patent. The minimum lumen diameters of the right and left graft limbs, and external iliac arteries were 8.4 and 8.5, and 5.5 and 3.1 mm; and the respective lumen diameters of the right and left femoral puncture sites were 5.8 and 4.4 mm (Figure 1B,C). The right graft limb was less tortuous than the left one (Figure 2A). Moreover, during a transbrachial percutaneous coronary intervention for severe stenosis of the left circumflex coronary disease before the TF-TAVI procedure, we used intravascular ultrasound for the right graft limb to evaluate the lumen diameters and investigate the intraluminal characteristics. The lumen diameters were maintained adequately and no evident findings of degenerative changes, including mural thrombus, neointimal hyperplasia, or deformation, were observed in the right graft limb (Figure 2B,C,D,E). According to the computed tomography, the respective minimum and maximum aortic annulus diameters were 18.6 and 24.0 mm, the aortic annulus perimeter was 66.7 mm, and the aortic annulus area was 344.0 mm2. Then, we assessed both transcatheter heart valves available at our center, a 26-mm Evolut R valve and a 23-mm Sapien S3 valve, to select the most suitable for the patient. Considering that a 26-mm Evolut R valve within a 14-Fr-equivalent InLine Sheath (Medtronic, Inc.) has a low-profile transcatheter heart valve delivery system compared with that of a 23-mm Sapien S3 valve within a 14-Fr eSheath (Edwards Lifesciences), we scheduled a right TF-TAVI using a 26-mm Evolut R valve. The patient provided informed consent, and the local ethics committee approved the treatment before undergoing TAVI. 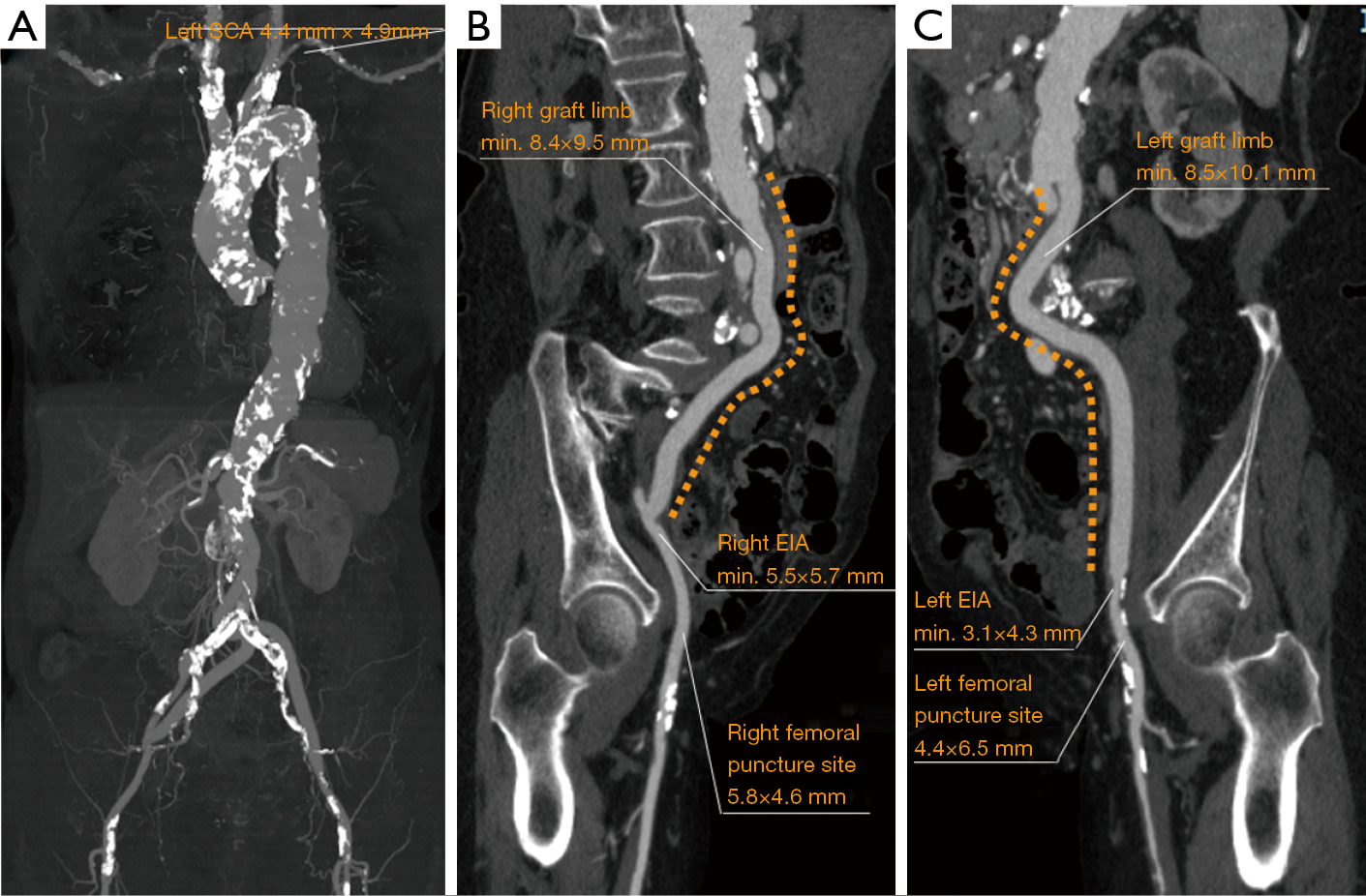 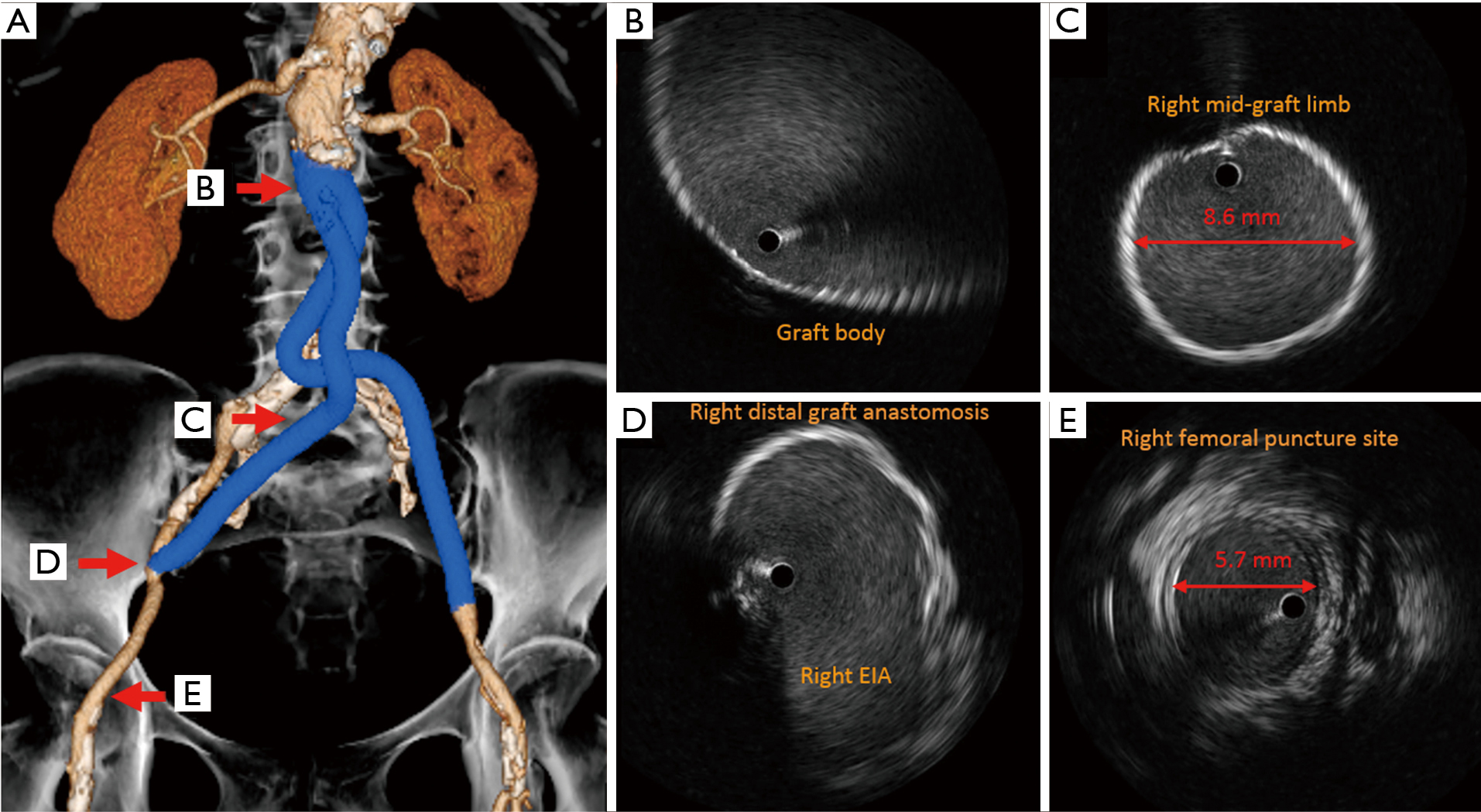 We performed the right TF-TAVI procedure with the patient under sedation in the following manner: At the beginning of the TAVI procedure, we performed angiography of the aorta down to the bilateral femoral arteries using a pigtail catheter through a 6-Fr sheath in the left femoral artery (Figure 3A). Next, we prepared two percutaneous closure devices (Perclose ProGlide; Abbott Vascular, Santa Clara, CA, USA) for the double preclose technique at the right common femoral artery. Subsequently, we confirmed the adequate elongation of the right graft limb using a Lunderquist extra-stiff guidewire (Cook Medical Inc, Bloomington, IN, USA) and the successful deliverability of a 14-Fr introducer sheath (Medikit, Tokyo, Japan) through the right graft limb over the guidewire (Figure 3B). After an exchange of the guidewire to a Safari pre-shaped guidewire (Boston Scientific, Boston, MA, USA) and removal of the 14-Fr introducer sheath, we smoothly advanced the transcatheter heart valve delivery system with a 26-mm Evolut R valve within a 14-Fr-equivalent InLine Sheath through the right graft limb (Figure 3C). Subsequently, we gradually expanded the Evolut-R valve under controlled pacing without pre- or post-balloon valvuloplasty. Finally, we implanted the Evolut R at the proper position without any complications, including valve embolization, coronary obstruction or annuls rupture. Post-procedural echocardiography showed only trivial paravalvular leakage. Under controlled hemodynamics, we removed the transcatheter heart valve delivery system following the completion of the double preclose technique. A final angiography of the right femoral access route displayed no findings of either vascular complications or graft deformation (Figure 3D). 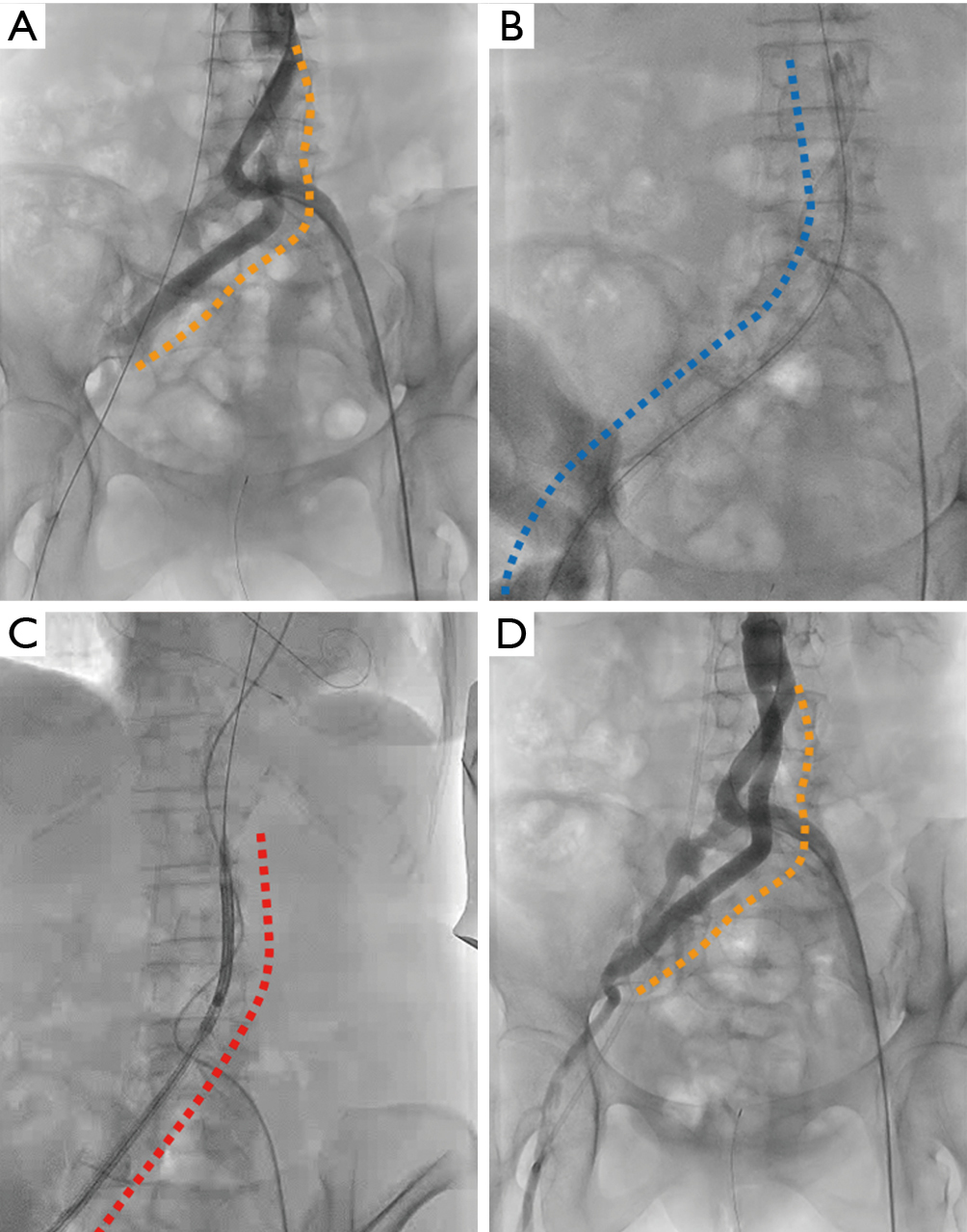 The anatomical characteristics of the femoral access route such as calcification, narrowing and tortuosity of the peripheral arteries or the aorta, as well as the presence of an artificial graft, could be in large part held accountable for the feasibility of TF-TAVI and thereby influence the selection of a transcatheter heart valve. In our patient with an aortobiiliac bypass graft, we took the following measures to successfully achieve the right TF-TAVI procedure through the graft: First, we used a 26-mm Evolut R valve within a 14-Fr-equivalent InLine Sheath. The “true” 14-Fr InLine Sheath with a constant outer diameter of 6.0 mm, which is the narrowest sheath available for TAVI, facilitates a better low-profile transcatheter heart valve delivery system than the 14-Fr Edwards eSheath with an expanded outer diameter of 7.65±0.34 mm (4,5). Moreover, in a previous report, although a statistically significant difference was not indicated, periprocedural vascular complication rates with the Evolut R device were suggested to be lower than those seen with the Sapien S3 device (1.8% vs. 3.2%; P=0.688) (6).

Second, we selected the right femoral access route with the right graft limb less tortuous and elongated the graft limb using an extra-stiff guidewire successfully. In addition, we tried a 14-Fr introducer sheath with an outer diameter of 5.6 mm over the extra-stiff guidewire before the insertion of the 14-Fr-equivalent Inline Sheath to validate deliverability prior to inserting the system.

Third, we assessed the lumen characteristics of the aortobiiliac bypass graft using not only computed tomography but also intravascular ultrasound before the TF-TAVI procedure to investigate possible degenerative changes, including mural thrombus, neointimal hyperplasia, and deformation. These changes might lead to periprocedural complications such as distal embolization.

In our patient, considering the anatomical characteristics of the femoral access route and the newest device available for TF-TAVI, we completed the right TF-TAVI procedure using the 26-mm Evolut R valve successfully and safely through the aortobiiliac bypass graft.

As for the safety, efficacy, and long-term outcomes of the TF-TAVI in patients with artificial bypass grafts, there are no previous comparative studies though there are a few case reports (3). Therefore, further data should be accumulated in the future.

Right TF-TAVI using an Evolut R self-expandable valve through an aortobiiliac graft was feasible and was achieved successfully and safely through meticulous preprocedural assessments using computed tomography and intravascular ultrasound.

Conflicts of Interest: Dr. Naganuma is a clinical proctor of Medtronic. The other authors have no conflicts of interest to declare.