Patients with multivessel coronary artery disease (CAD) constitute a high-risk cohort and coronary artery bypass graft surgery (CABG) has been the established mainstay of treatment. There, exists, however, significant heterogeneity in the multivessel disease (MVD) population (1). With improved durability of newer generation drug eluting stents, PCI is being increasingly performed in patients with more complex MVD, especially with the recent advances in percutaneous chronic total occlusion (CTO) recanalization. Similarly, from a patient outcome standpoint, optimal medical therapy has been shown to be as effective as revascularization in patients with stable ischemic heart disease (2,3).

Pitfalls of angiographic assessment in MVD

Decision making for patients with CAD has been based almost exclusively on the anatomic severity and extent of epicardial coronary stenoses. In this regard, the Synergy between percutaneous coronary intervention (PCI) with Taxus and Cardiac Surgery (SYNTAX) trial and its derived and validated SYNTAX score (SS), a predictive tool based on the complexity, severity and extent of epicardial stenosis, has been instrumental in risk stratifying patients with MVD and providing guidance on the best revascularization approach for patients in the different SS tertiles (4). Despite being a robust predictive instrument, the score is fundamentally limited in its prognostic power as it is based only on anatomic factors with a lack of established powerful clinical predictor variables [age, diabetes, left ventricular dysfunction, chronic kidney disease (CKD) etc.] (5). Furthermore, the threshold of anatomically significant stenosis as defined in the SS is based on visually estimated diameter stenosis of >50%. The limitations of coronary angiography and even quantitative coronary angiography in correlating with a hemodynamic significance of a stenosis have been long recognized (6-9). The DEFER trial (Deferral of Percutaneous Coronary Intervention) and its 15 years follow-up have conclusively demonstrated that a fractional flow reserve (FFR) guided deferral is very safe and clinically more effective and superior to angiography guided decision making (8). To further discriminate lesions for which PCI can provide clinical benefit, the investigators of the FAME trial (Fractional Flow Reserve versus Angiography for Multivessel Evaluation) demonstrated clinical superiority in terms of death, nonfatal myocardial infarction (MI) and repeat revascularization using an FFR-guided approach in patient with stable multivessel CAD (9). In addition, an FFR-guided approach allows significant health care savings and less stent implantations. Angiographic assessment can also underestimate stenosis severity. In particular, stenosis severity in isolated left main disease (LM) is often difficult to appreciate by short segment length and ostial location. For instance, an FFR of <0.8 signifying hemodynamic significant lesion is found in 23% of patient with <50% stenosis by angiography (10). The integration of angiographic guidance that offers spatial and temporal evidence of stenosis in conjunction with functional assessment using FFR augments decision making when treating patients with stable CAD.

Not only is coronary angiography limited in predicting ischemic lesions in the intermediate zones but also in the severe zones. This has been elegantly demonstrated by the FAME investigators who showed that in the 50−70% stenosis range,35% lesions are functionally significant (FFR <0.80) while even in the 71−90% stenosis category up to 20% lesions are hemodynamically insignificant (11). The implications of this are paramount as a large proportion of lesions that are considered significant per SS entry criteria (>50% luminal stenosis) or even the most recent iteration of the AUC criteria for revascularization (significant stenosis defined as >70% in the worst angiographic view) are hemodynamically insignificant. This brings forth the important concept of reclassification of angiographically significant lesions based on physiological grounds

In the FAME trial, 115 patients had triple vessel disease based on angiography assessment. However based on FFR evaluation, only 14% had functionally significant triple vessel disease, while 43% had double vessel disease and 34% had single vessel disease (11). Studies have repeatedly suggested that bypassing grafts on functionally insignificant coronary lesions do not confer perfusion benefits, and instead lead to accelerated progression of the native coronary atherosclerosis in addition to increased periprocedural events (12,13). Sub analysis from the FAME investigators including SS prospectively collected in 497 patients showed that the functional SYNTAX score, or FSS (calculated by counting only ischemic producing lesions), reclassified one-third of the patients (from the intermediate or higher tertiles based on anatomic SS) into a lower risk group. Furthermore, FSS (and not anatomic SS) was an independent predictor of one-year major adverse cardiac events (MACE), and the predictive power of FSS was superior to anatomic SS as determined by receiver operator curve (ROC) analysis (14).

Furthermore, recent post hoc analysis of the FAME trial showed that residual angiographic stenoses did not have additional prognostic implication after the achievement of functional complete revascularization (CR) (15).

The impact of FFR on reclassification of disease burden and treatment strategy has also been demonstrated in several real world studies. The most important of these is a large multicenter French registry that showed that among 1,075 patients undergoing coronary angiography, FFR changed the interpretation of disease severity and affected the management strategy in 43% of patients (16). Importantly, of 79 patients who would have been sent for CABG only 49% had functional MVD, 13% were sent for PCI while 38% to medical therapy. Similarly, of 409 patients who would have gotten PCI based on angiography alone, only 52% were revascularized with the remaining deferred to medical therapy. Most importantly, of 587 patients initially planned for medical therapy, 34% were reclassified as being functionally severe CAD and underwent revascularization. The authors also demonstrated the safety and clinical efficacy of this approach such that there was no difference in one-year MACE events and angina severity amongst reclassified and non-reclassified patients (16). Similar findings were demonstrated by the RIPCORD study investigators, who showed that among 200 patients with chest pain undergoing angiography, routine FFR measurement changed the management strategy in 26% patients (17).

Of the many reasons cited for graft failure, one most intuitive though seldom appreciated is grafting of an artery with hemodynamically insignificant lesions. Aside from conduit failure, un necessary grafting has been shown over time to lead to atherosclerotic progression in the subtended native coronary artery, this issue being more problematic with venous than arterial grafts. Similarly, a LIMA graft in the setting of robust competitive flow from a native coronary artery without hemodynamically significant stenosis leads to the failure of LIMA maturation and ultimately atrophy of the LIMA graft (between 50−80% LIMA attrition when grafted to vessels with mild stenosis severity (e.g., <50%).

A few studies have evaluated the role of FFR in patients undergoing CABG. Botman et al. evaluated 164 patients undergoing CABG with FFR in all vessels that were to be grafted. FFR results were not shared with the surgeons. At one-year angiographic follow up, 8.9% of grafts to functionally significant lesions were occluded vs. 21.4% on functionally non-significant vessels (18).

There is evidence that FFR guided bypass grafting may be safe and clinically effective as demonstrated in a study by Toth et al. (19). Amongst 627 patients, surgical revascularization strategy guided by FFR measurement was compared retrospectively with a traditional strategy guided by coronary angiography. The authors found that FFR-guidance was associated with a significant reclassification of the severity of MVD leading to simplification of the surgical protocol with lower number of anastomosis and lower rate of on-pump surgery observed in the FFR-guided CABG group of patients. Despite incomplete anatomical revascularization of these latter patients, at 3 years there was no difference in terms of adverse cardiac events and an even lower rate of angina Canadian Class Society Class II–IV as compared with patients treated with a traditional strategy, suggesting the safety of performing functionally CR in these patients. Further, graft patency rate was higher when surgical revascularization was guided by FFR compared with angiography, confirming and extending up to 3 years (19). A recently published 6 year follow up of this cohort demonstrated that FFR-guided CABG was associated with a significant reduction in the rate of overall death or MI as compared with angiography-guided CABG (16% vs. 25%; P=0.02) (20).

Physiology guided CABG appears to confer procedural and prognostic benefit and its role will be likely further consolidated in several randomized trials underway.

The importance of CR in patients with MVD is being increasingly recognized and incomplete revascularization (IR) has been associated with poor outcomes (21-23). In fact, a graded association between a quantifiable measure of IR, the residual SS and five-year mortality has been demonstrated such that patient with residual score of >8 had mortality of 35% compared to 9% in patients with CR i.e., residual score 0 at 5 years in the SYNTAX trial. Furthermore there was no difference in mortality between CR groups and patients with rSS<8 (23).

Most recently, a combined anatomical and functional assessment of residual disease burden scoring system has been developed as a promising physiological score in stable multivessel CAD patients (24). Residual functional SYNTAX score (rFSS) is the sum of residual SS of vessels with low FFR (<0.80). In the 3v-FFR-FRIENDS (3-Vessel Fractional Flow Reserve for the Assessment of Total Stenosis Burden and Its Clinical Impact in Patients With Coronary Artery Disease) study, a prospective, multicenter non randomized study, s subset of 385 patients (34% of initial cohort undergoing PCI) were studied to derive this score. Per study protocol, FFR was remeasured after PCI and not all FFR positive vessels underwent PCI, the authors were able to calculate rFSS and rSS of vessels with post PCI FFR<0.80 (very important to underline that 50 patients did not undergo PCI despite having abnormal FFR <0.80 because of diffuse narrowing without focal stenosis, small vessels, heavily calcified arteries etc.) At 2 year follow up, patients with functionally IR (n=102; 26%) had a >3-fold higher MACE event rate (14.6% vs. 4.2%) compared to functionally CR group (283; 74%) driven by higher revascularization and MIs in the FIR group. FIR was independently predictive of MACE. Further, the rFSS showed incremental predictive value over clinical and anatomic residual SS for MACE prediction (24). Limitations of this study include it being a subgroup analysis of a larger observational cohort, lack of differential weights (clinical and prognostic) to the FFR of various coronary arteries in relation to the amount of myocardium supplied by each vessel and lack of insight into how persistently ischemic FFR after PCI was dealt with by the operators. Lastly, the event rates were lower than previous large-scale studies.

In summary, the growing evidence base substantiates an established role of a physiological approach (FFR guided) in determining the appropriateness (medical therapy alone vs. revascularization), type (PCI vs. CABG) and extent (number of vessels stented/grafted) of revascularization in patients with MVD, has been proven to be clinically and cost effective and can provide powerful risk stratification of this subset of high-risk patients (Figure 1). 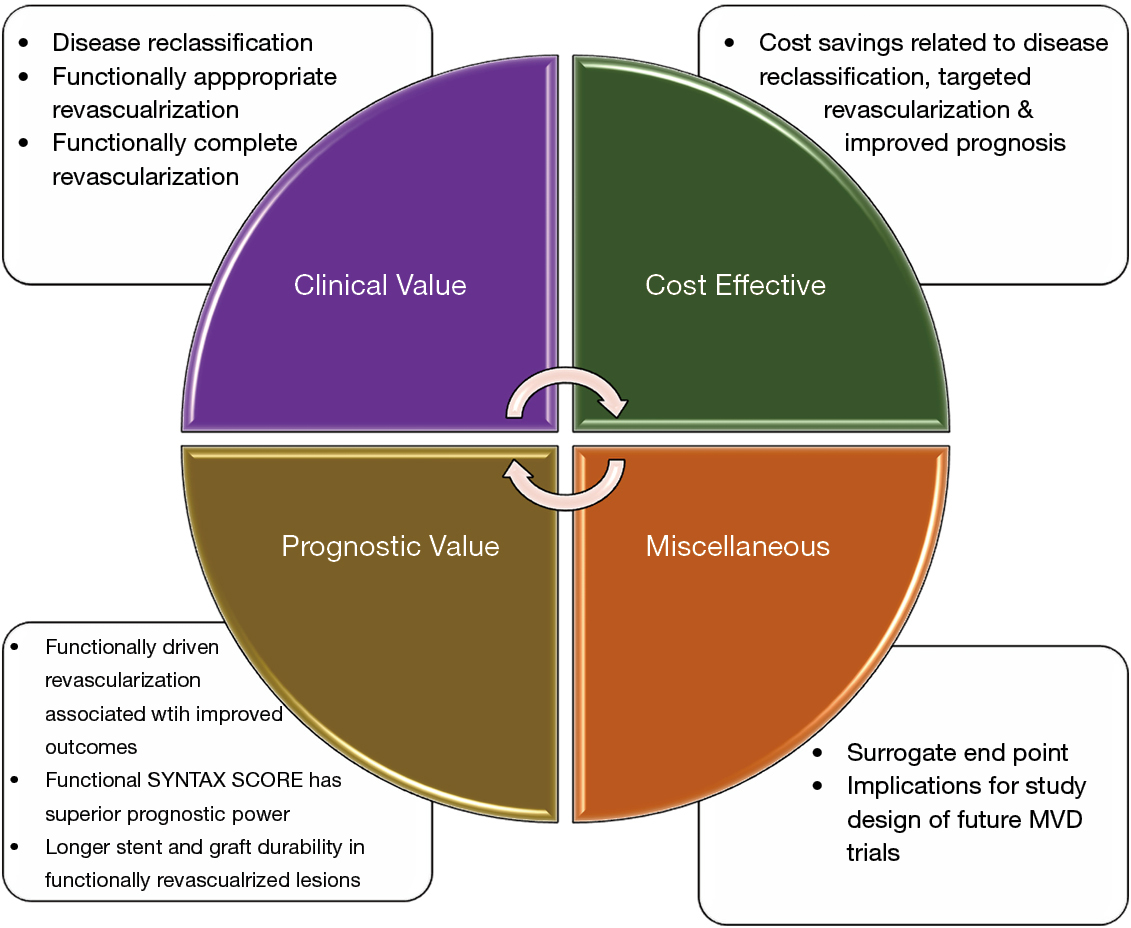