Lung cancer is the leading cause of cancer death worldwide (1). Non-small cell lung cancer (NSCLC) causes 85% of the cases, and small cell lung cancer (SCLC) accounts for the other 15% (2). Activating alterations of epidermal growth factor receptor (EGFR) lead to 10–15% and 30–40% of NSCLC, especially adenocarcinoma, in Caucasus and Asian patients (3). In contrast, EGFR mutations are extremely rare in SCLC (4). However, some patients exhibit a combination subtype of SCLC and adenocarcinoma with EGFR mutation, which have been poorly investigated in terms of effective targeted therapeutic strategy.

The development of EGFR tyrosine kinase inhibitor (TKI) for targeted therapy has revolutionized the treatment of EGFR mutation-driven cancer. Patients harboring EGFR alterations benefit from gefitinib, a first generation of EGFR-TKI, and show promising partial responses (PR) (5-8). However, the responses are not often permanent and patients always experience a relapse after median progression-free survival (PFS) of 12 months due to development of resistance (9). T790M is reported as a cause of 50–60% resistant tumors while MET and HER2 amplification accounts for 15–20% of resistance (10-12). Another resistance mechanism is the histological transformation of EGFR-mutant adenocarcinoma to SCLC (13). Osimertinib is a third-generation of EGFR-TKI which can overcome acquired T790M resistance mutation but also penetrate blood brain barrier (BBB) for leptomeningeal metastasis therapy (14,15). In this case, we reported a patient harboring EGFR alteration was diagnosed as combined subtype of SCLC and adenocarcinoma, and efficaciously responded to EGFR-TKIs.

A 44-year-old male presented cough plus expectoration for 1 month after getting cold. He was admitted to our hospital on February 15, 2016 because of unresponsive to anti-infective treatment in another institution. Chest computed tomography (CT) showed inflammation and cavitation in the lower lobe of right lung, with a small amount of pleural effusion. Pathological examination of biopsy showed some heterocysts in right lower lobe mucosa. Immuno-histochemical displayed Ki-67(90%+), P53(+), TTF-1(+) and CK7(+), and several tumor markers showed positive results (CEA =10.5 ng/mL, CA19-9 =149.5 µg/mL, CA125 =695.4 µg/mL). Hematoxylin-eosin (H&E) staining revealed that the tumors had a mixture of small cell carcinoma and adenocarcinoma components (Figure 1A,B). CT-guided core needle biopsy of lung revealed no EGFR mutation in exon 18, 19, 20 and 21 using ARMS-PCR. Single photon emission computed tomographic and computed tomographic (SPECT/CT) image combined with whole body bone planar imaging showed no concurrent metastasis. Brain magnetic resonance imaging (MRI) examination did not show any abnormality of brain. Taken together, this patient was diagnosed as stage IIIa (cT2aN2M0) combined SCLC (CSCLC), SCLC with adenoid differentiation. This patient was treated with EP therapy, combination of etoposide (0.1 g) plus cisplatin (75 mg), as the first-line therapy. He achieved PR one and a half months after treatment initiation. He experienced progressive disease (PD) with bone metastasis and got a PFS of 3 months. On May 11, 2016, at disease progression stage, PET/CT revealed an active tumor metabolism in posterior segment of right lung lower lobe with standard uptake value (SUV) of 4.8. Bone imaging showed the appearance of multiple bone metastases, especially in the ischium. Tumor markers exhibited a much higher level (CEA =62.3 ng/mL, CA19-9 =148.5 U/mL) than February. 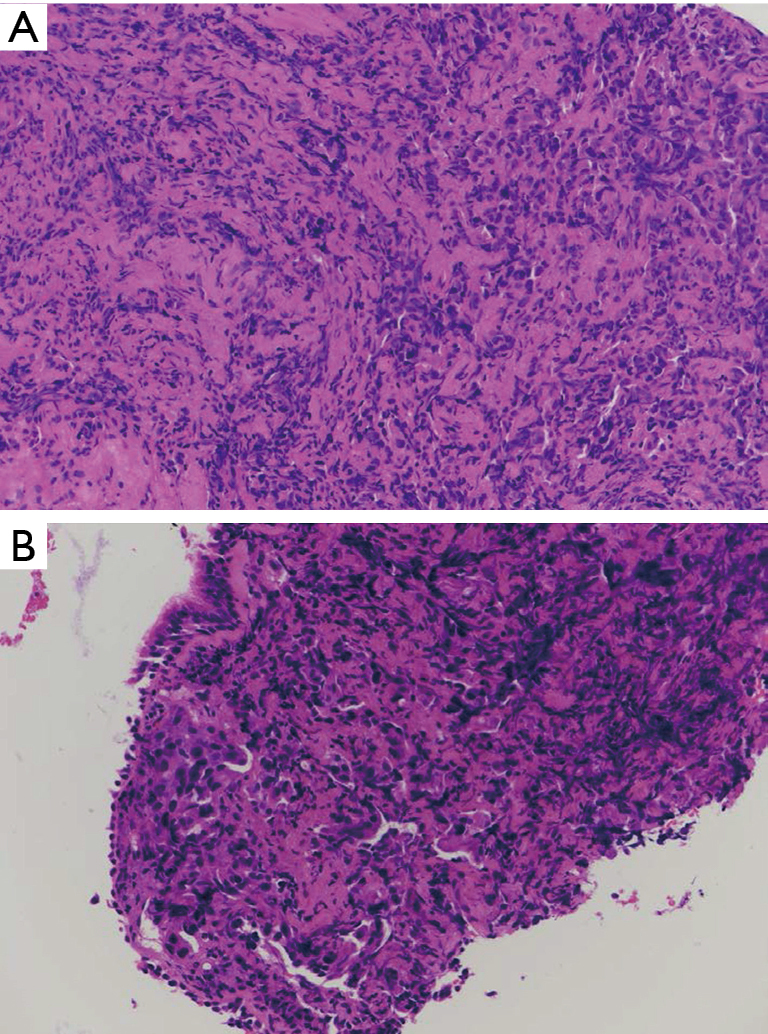 Capture-based targeted sequencing of liquid biopsy assessing circulating tumor DNA (ctDNA) was performed and revealed a novel EGFR gene alteration A750_I759delinsGEG (T750_K759 deletion replaced with GEG insertion in exon 19), with an allelic fraction (AF) of 0.41% (Figure 2). The patient was administrated with EGFR-TKI gefitinib (Iressa, 0.25 g QD) as the second line treatment. One month later, he experienced stable disease (SD) in lung and lumbar lesion. Two months after gefitinib treatment initiation, he returned to our clinic due to dizzy and tinnitus followed by fainting and epilepsy, with a poor performance status (PS) of 4. He showed gefitinib resistance and developed PD with bone and leptomeningeal metastasis. Repeated liquid biopsy sequencing was performed and the AF of EGFR A750_I759delinsGEG was 0.30%. However, gefitinib resistant mutation EGFR T790M has not been detected at this time. 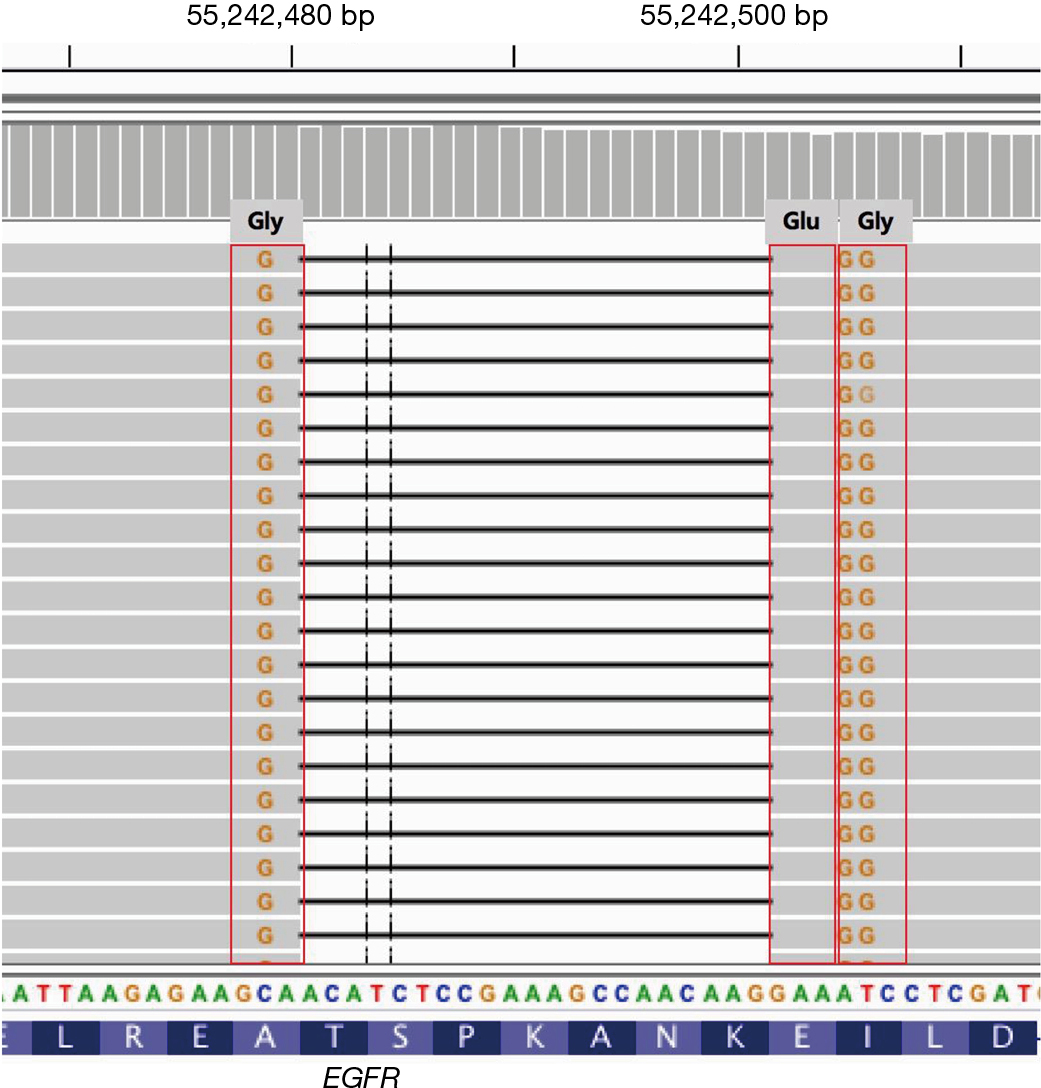 Owing to leptomeningeal metastasis, the patient was administrated with osimertinib (0.16 g, QD), a third generation of EGFR-TKI which can penetrate blood-brain barrier and show efficacy to leptomeningeal metastasis. He experienced significant improvement in headache and got a PS of 2. One and a half month later, CT scan revealed that he achieved PR with lung lesions shrinkage and reduced mediastinal lymph node lesions (Figure 3), accompanied with SD in leptomeningeal lesion. The third round of plasma biopsy ctDNA sequencing was then performed and it revealed a dramatic decrease of EGFR exon 19 A750_I759delinsGEG from AF 0.30% to 0.02%. Finally, he got PD with progressive bone metastasis, with a PFS of 4 months.

In this case, we collected the patient’s peripheral blood at various therapeutic milestones during gefitinib and osimertinib treatment and performed capture-based targeted sequencing for ctDNA profiling. The dynamic changes in AF of EGFR mutations were illustrated in Figure 4. 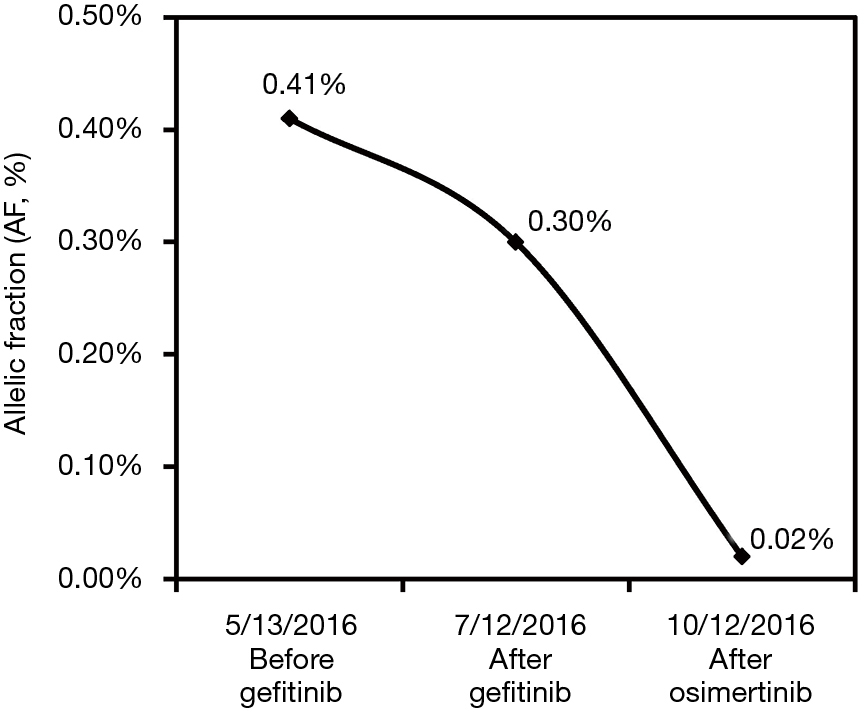 In this case, capture-based ultra-deep sequencing was performed and a novel EGFR exon 19 deletion A750_I759delinsGEG was identified. To the best of our knowledge, this is the first reported clinical case of this mutation in combined SCLC and adenocarcinoma patient. ARMS was used to detect the EGFR gene alterations of lung tissue biopsy at the first visit to our hospital. However, ARMS kit can only detect deletions with E746 and L747 in EGFR exon 19 as the mutation starting points. Thus, the limitation of ARMS contributed to the failure detection of A750_I759delinsGEG at patient’s first visit. Moreover, patient with both SCLC and adenocarcinoma components showed great heterogeneity, so tissue biopsy cannot fully reflect the overall genomic alterations compared with plasma samples. This gave us the indication that for the tumors with obvious heterogeneity, liquid biopsy would be a better choice for genomic profiling.

The AF of EGFR exon 19 A750_I759delinsGEG decreased from 0.41% to 0.30% after the treatment of gefitinib and the marginal AF change cannot fully be illustrated as significant clonal response. However, the achieved SD in lung and lumbar lesions demonstrated the efficacy of gefitinib on inhibiting tumor cells. After treatment of osimertinib, the patient obtained PR in extracranial lesions and SD in leptomeningeal region. AF exhibited a dramatic decrease from 0.30% to 0.02% in liquid biopsy, which demonstrated the effective BBB penetration of osimertinib and efficacious inhibition of tumor growth in this mixed cancer subtype.

EGFR alteration status is the most important determining factor of clinical response to TKI. In a cohort of 170 NSCLC patients with EGFR alterations, patients harboring exon 19 delL747_P753insS had the shortest median PFS (6.5 months), followed by those with delE746_A750 (12.4 months) and mixed insertion/substitution alterations (22.3 months). Deletions starting from codon E746 had a better median PFS (14.2 months) than those starting from L747 (6.5 months) (16). One in two patients with deletions starting from T751 showed a PFS of 13.3 months, while another was still under PR before publication (16). These studies suggest that for this patient with a rare exon 19 deletion A750_I759delinsGEG, the risk of poor prognosis after TKI is high due to the specific subtype of EGFR. Indeed, our patients benefited a very short period (1 month of SD) in lung and lumbar lesions from gefitinib treatment, and then rapidly developed PD with meningeal metastases.

Another contributing factor to the rapid progression of disease may be tumor characteristics: combined components of SCLC and adenocarcinoma. The mixture of the two tumor types may be caused by either histological transformation from EGFR-mutated adenocarcinoma to SCLC or by simultaneous occurrence of combined tumors from origin. Gefitinib was only approved by FDA effectively for advanced NSCLC patients harboring EGFR alterations. EGFR alterations are mainly found in NSCLC and extremely rare in SCLC. Besides of this, in this case, even if the SCLC component harbored EGFR mutation, it is of great possibility that EGFR mutation do not function as a driver gene which lead to PD.

However, several cases suggested that EGFR-TKIs may be a therapeutic option for a subset of SCLC tumors that overexpress functional EGFR. A SCLC patient with EGFR exon 19 deletion (delE746-A750) was reported to show marked regression of both the primary lung and metastatic liver tumor after gefitinib treatment (17). In another case report, a patient with combined subtype of SCLC and adenocarcinoma with EGFR mutation also achieved PR to gefitinib (18). In this study, we reported EGFR-TKI can be clinical effective for patients with combined subtype of SCLC and adenocarcinoma carrying EGFR oncogenic gene alterations. This provided a clinical evidence for such subset of patients and indicated that, although EGFR mutations are rare in SCLC, EGFR-TKI may also be a feasible treatment option for patients with combined components of SCLC and adenocarcinoma harboring EGFR mutations.

We owe thanks to the patient and his family. We thank the staffs at Zhongshan Hospital. We thank Burning Rock Biotech for NGS technical support, scientific comments and writing assistance.

Funding: This study was supported by funding from National key R&D program of China (grant No. 2016YFC1304002).