Malignant tumors which lead to lung cancer, is the leading contributor to the high mortality and morbidity in China (1). Although chemotherapy, radiotherapy, specific immunotherapy and molecular target therapy have had great progress in the past decades, radical surgery is still the primary option for relatively early stage of lung cancer. With the advent of rapid technological progress and constant renewal of ideas, thoracic surgery is becoming more and more minimally invasive.

Conventional three-port video-assisted thoracic surgery (VATS) has thought as the main standard technique in treating lung cancer for many units around the world (2). Many studies have demonstrated that VATS lobectomy showed decreased hospitalization time, less loss of respiratory function, shorter chest tube drainage time and fewer postoperative complications (3). Besides, four-port (4) and two-port (5) VATS are also reported by several centers. Since 2010, uniportal VATS which is firstly performed by Gonzalez et al (6,7) through a small incision of about 4 cm has expanded an area of exploration in minimally invasive approach. A recent meta-analysis revealed better outcomes of uniportal VATS regarding to postoperative hospitalization, chest tube drainage time and pain score (8).

The aim of this study is to optimize two important aspects of VATS, that are cutting length and technique procedure. The most currently popular and matured option for incision selection of VATS include traditional three port and uniportal methods. The three-port procedure is not restricted by the operation angle, the resection is more convenient and the operation speed is faster. Single port procedure is operated through a single intercostal, which has beautiful incision, less pain (9). However, because of the limited internal angle, the operation is more complex, the operation speed is slow. Therefore, we designed a new procedure named two micro-portal VATS technique which shortened the length of viewing port and secondary operating port. So, the wound becomes smaller both outside and inside. In order to make the operation more reasonable and simpler, we designed different surgical procedures of hilar dissection for different lobectomy, which we called tangent line single-direct VATS lobectomy. There is no need to turn over the lobes too many times during the operation, which avoiding tumor cells entering the circulatory system as a result of turning and squeezing the lungs.

The characteristic data studied in each patient include age, body mass index (BMI), gender, smoking status, tumor location, tumor maximum diameter, histologic type, lymph node staging, tumor staging, operative time (from the beginning of general anaesthetic to extubation), blood loss, number of lymph node retrieved, pain score on day 1, 2, 3, 7 after surgery, duration of chest tube in place, length of hospital stay and postoperative complications regarding to pulmonary infection, gas leak over 5 days and death. Patients who were older than 75 or younger than 18 were excluded. The tumor stage was determined according to the seventh edition of American Joint Committee on Cancer staging system.

All patients were delivered general anesthesia with two lumen tube intubation and operated in a lateral decubitus position with the operating table flexed to increase the intercostal space.

For traditional three port VATS lobectomy, two 10–20 mm incisions were made in the seventh intercostal space at the midaxillary line and the ninth intercostal space at the scapular line, as viewing port and secondary operating port separately. Then, a main operating port was made on the third or fourth intercostal space of the anterior axillary line, with a length of 20–25 mm incision that was attaching with a wound protector. After that, a 10 mm 30° oblique-viewing thoracoscope was used in the operation. The dissections were mainly done using endoscopic ultrasonic scalpel and occasionally using endoscopic hook electrocautery. The resection was performed using flexible curved-tip endoscopic staplers in the order of pulmonary vein, lobar bronchus, pulmonary artery and interlobar fissure. This procedure was learned from Prof. Liu, that he called single-direction thoracoscopic lobectomy (10). Subsequently, the resected lobe was removed using a protective specimen bag through the main operating hole. Afterwards, systemic mediastinal lymph node dissection was performed in a standard way, which included group 2, 3, 4, 7, 9 lymph nodes in the right side and group 5, 6, 7, 9 lymph nodes in the left side. Finally, a 10-mm rubber chest tube was placed through the secondary operating port for the middle and lower lobectomy. For upper lobectomy, another tube was placed through the viewing port to the cupula pleurae. At the end of operation, the tube was secured with a U-shaped suture to allow proper closure of the wound when removing the tube.

For two micro-portal VATS lobectomy, the viewing port and secondary operating port were replaced by a 5-mm trocar comparing with traditional three-port VATS lobectomy (Figure 1). Accordingly, the new procedure was performed using a 5-mm 30° oblique-viewing thoracoscope. The resection order was followed by the principle of “from back down to front up” way. In detail, for upper lobectomy (Figure 2), the resection was made in the order of pulmonary artery and its branches, lobar bronchus and pulmonary vein. For right middle lobectomy, we chose the main operating port in the third intercostal space of the anterior axillary line and followed the resectional order of vein-bronchus-artery. For lower lobectomy, the resection was performed in the order of vein-bronchus-artery or artery-bronchus-vein. In the end, the chest tube was changed to thinner and softer latex material. 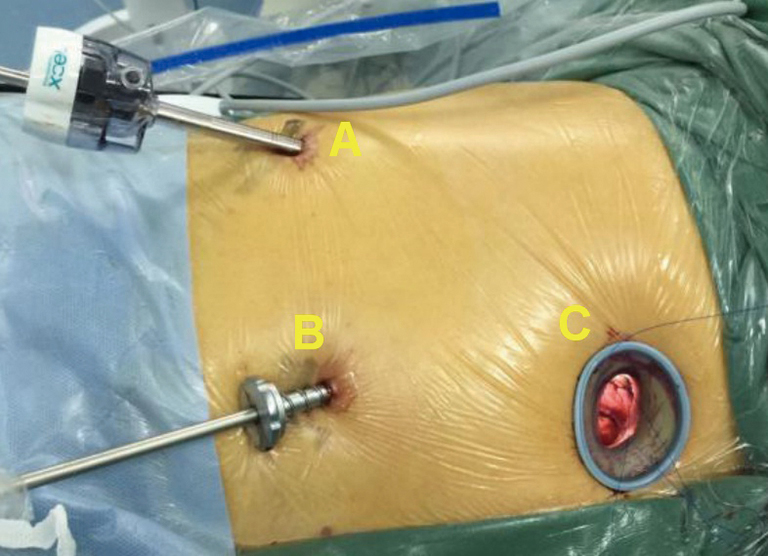 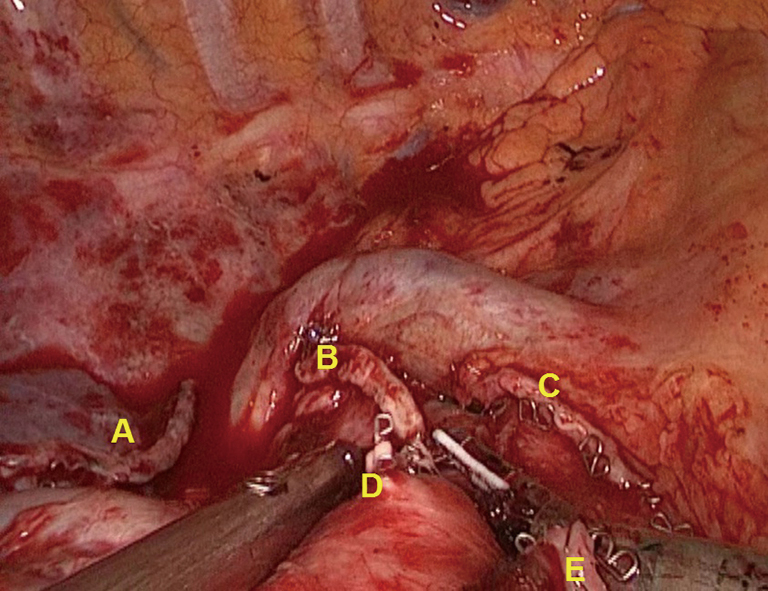 All patients were observed in our intense care unit for six hours at least. The same dose of disposable self-control PCA (sulfentanyl and dezocine) and prophylactic antibiotics were used routinely. The intensity of postoperative pain was scored with a 0–10 numerical analogue scale. Pain scores were assessed at 24, 48, and 72 h after surgery and at 1 week postoperatively. The chest drain was removed when the amount of chest draining was less than 100 mL per day, without air leakage, no pneumothorax or localized pleural effusion on chest X-rays. Patients were usually discharged from the hospital 1 day after the chest tube was removed.

Ethical approval was not required by the Tangdu Hospital. The procedure had standard indications and oncological principles. Meanwhile, all patients were signed written informed consent and not involved in a formal trial.

There were 208 patients who underwent VATS lobectomy between June 2016 and December 2017 by Prof. Yan at our department. One hundred and four patients underwent traditional three port VATS and 104 patients underwent two micro-portal VATS lobectomy. All patients were confirmed to be primary lung cancer in postoperative pathological diagnoses and classified by pathologic stage. As demonstrated in Table 1, the two groups were well matched in regarding to age, body weight index (BMI), gender, smoking status, tumor site, TNM stage and histological type. 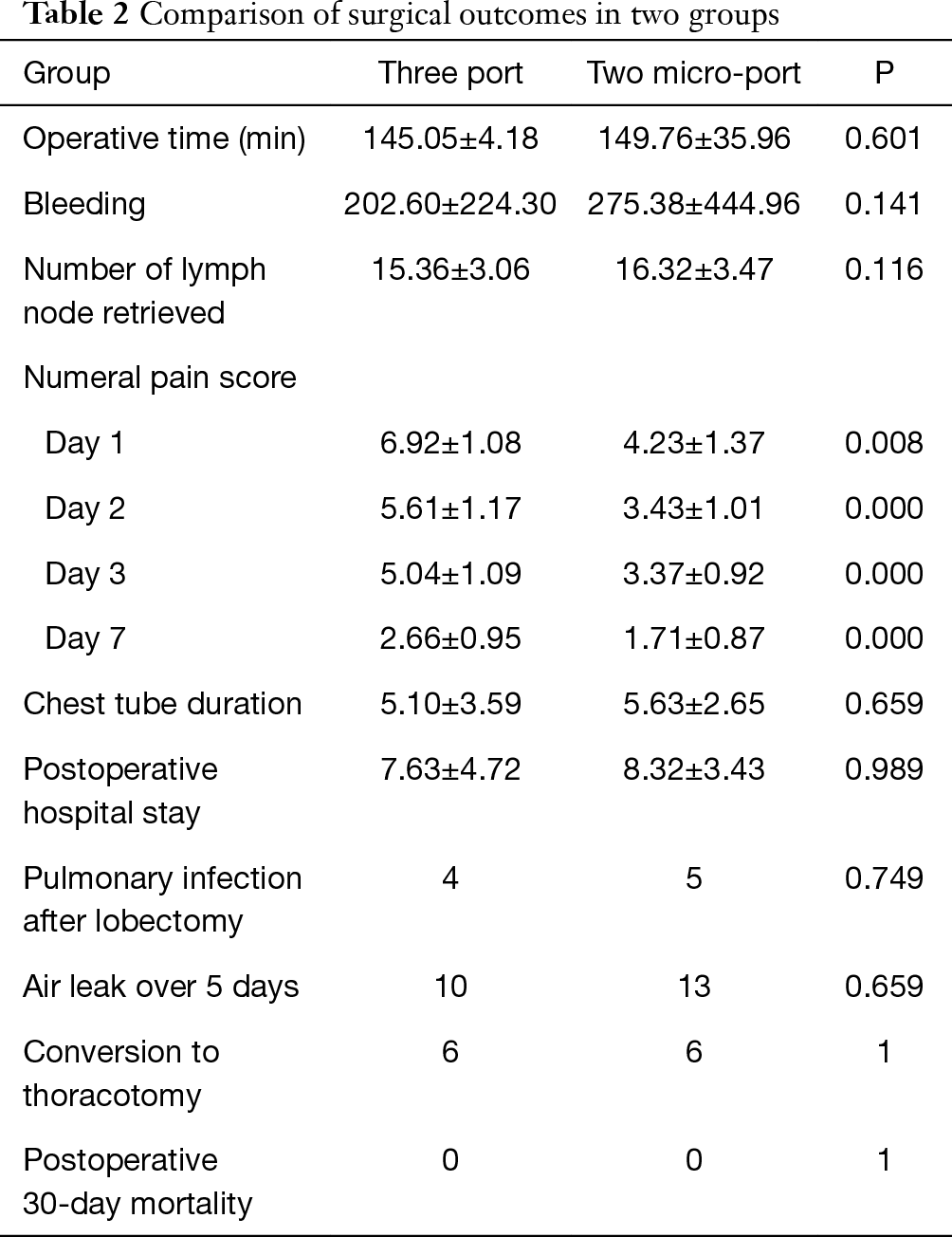 VATS lobectomy was widely practiced using 1 to 4 port incisions in China. The most representative procedure includes the single-direction thoracoscopic lobectomy of West China Hospital (10) and the single port thoracoscopic lobectomy of Shanghai Pulmonary Hospital (11). Several studies demonstrated that uniportal VATS minimized the amount of surgical trauma and had many advantages including decreased postoperative pain, shorter hospital stay, preservation of pulmonary function and so forth when compared with traditional three port VATS. Wang et al. (12) noted that uniportal VATS was geometrically favorable to multiportal techniques, which provided more anatomic and direct in-plane view of the target tissue, and made it easier for the surgeon to judge distances and improve the accuracy of the surgical maneuvers. However, due to its technical difficulty such as instrumentation impeding with each other and exclusive need of endoscopic instruments with two articulation, uniportal VATS was performed only in a limited number of hospitals. We considered that our method made best use of the advantages of traditional three port VATS and bypassed the disadvantages of uniportal VATS.

The result of this study revealed that there were no surgery related mortality and no significant differences in operative time, blood loss, number of lymph nodes dissected, chest tube duration, length of stay or postoperative complications between the two group. These results indicated that the safety and efficacy of two micro-port and three port VATS were similar. Moreover, our results showed that the numeral pain scores were significantly lower in the two micro-portal VATS group, which might be attributed to less incision trauma and reduced intercostal nerve injury. The total length of incision was 3–3.5 cm which was even shorter than the single port. Meanwhile, the use of 5 mm trocar and wound protector successfully avoided the injury to the chest wall from the instruments. A recent study by Nardini et al (13) also demonstrate that microlobectomy using 5 mm trocar and instrument is a valid alternative to traditional VATS techniques.

This study has several limitations. First of all, the retrospective nature of data lends themselves to inherent bias, even though the patients have received the standardized perioperative care. Secondly, we didn’t compare the intraoperative and postoperative outcomes of a specific lobectomy between the two groups due to limited sample size. In addition, the study had no long-term follow-up data on oncologic factors such as tumor recurrence rate and overall survival rate. This will be our further work to be on going.

Ethical Statement: Ethical approval was not required by the Tangdu Hospital. Meanwhile, all patients were signed written informed consent and not involved in a formal trial.