Airway stenosis is a severe life-threatening condition in both adults and children, caused by a variety of conditions, and is divided into benign and malignant strictures. Common causes of benign airway stenosis include iatrogenic factors, inflammation, infection, dynamic collapse, and other miscellaneous causes. Malignant causes include lung cancer, a salivary gland tumor, thyroid cancer, and metastatic diseases presenting as extrinsic airway compression by a tumor, an intrinsic airway tumor, or a combination of these (1,2).

Airway stent implantation is a safe and highly effective treatment for both malignant and benign tracheobronchial stenosis (3-8), promptly palliating dyspnea, reducing the risk for asphyxia (5,9) and enhancing survival (10-12). Airway stents are generally divided into metallic and non-metallic stents. As an example of the latter, the Dumon stent first introduced by Dr. Jean-François Dumon in the 1990s (13) remains the most widely used (7,14). Non-metallic stents are made of non-ferromagnetic materials and thus do not affect MRI. However, safety issues associated with MRI of patients with metallic stents remain of concern. It is unclear whether such patients can safely undergo MRI. Hence, in this review, we focus on the safety of metallic and hybrid stents (covered metallic stents). We performed a structured PubMed search using the key phrase “stents and magnetic resonance imaging.” We screened the literature on MRI safety issues associated with metallic tracheobronchial stents. We also included manufacturer data.

Stent materials are of prime concern in terms of their safety when undergoing MRI. Metallic stents can be divided into balloon-expandable and self-expandable stents; the latter include uncovered and partially and fully membrane-covered stents (of which the last two are hybrid stents). Metallic stents consist of stainless steel (SS) and nickel-titanium memory alloy stents. The former includes the Palmaz mesh, Gianturco-Z, Sigma, and Dynamic (Y-type) stents, and the latter include the Wallstent mesh, Ultraflex knitting, Silmet, Leufen, and Micro Tech stents. As SS is ferromagnetic, SS stents may interact with a magnetic field.

Apart from traditional stents, drug-eluting and three-dimensional (3D)-printed stents afford more options for patients with airway stenosis. Drug-eluting stents feature a bare metallic stent, drugs, and a carrier, and can inhibit restenosis (15). In contrast, 3D-printed airway stents, which were first introduced in 2014 by a team from the University of Girona, Spain, are made of silicone (16). Currently, most materials used to make 3D-printed stents are non-magnetic, and include silicone and polymers (17). However, more sophisticated printing technologies using alternative materials are under investigation. Notably, it remains unknown whether these emerging stents compromise the safety of MRI.

During MRI, metallic implants may interact with the magnetic field, harming both the patient and the imaging device. When encountering a magnetic field, metallic objects become magnetized and thus are affected by a displacement force and torque, triggering dislodgment (18,19). In addition, the field gradient and radiofrequency (RF) pulsing raise the temperatures of metallic materials and their environments (19-21). The RF wavelength, type of RF transmission coil used, and specific absorption rate (SAR) of stent material affect the temperature increase. MRI-associated heating varies markedly by RF (22). Furthermore, it should be noted that when describing the SAR during MRI, the whole-body-averaged SAR for each scan sequence is required (23). Finally, magnetic artifacts are principally attributable to the destruction of static and gradient magnetic fields. Severe artifacts hamper image quality (19). When labeling artifacts in the context of MRI safety, artifact extents should be described (18).

In 1997, the Food and Drug Administration (FDA) Center for Devices and Radiological Health first proposed that the terms “MR safe” and “MR compatible” should be used to label medical devices (23). Given the variety of MR systems and MR conditions in clinical use today, the standards for MR device safety were revised by the American Society for Testing Materials (ASTM) International in 2005, and are documented in the ASTM International F2503 guidelines. The US FDA requires all implants and medical devices to be labeled as “MR safe,” “MR unsafe,” or “MR conditional” (23,24). However, this revised terminology has not been retrospectively applied to the many implants and devices that previously received FDA approval using the terms “MR safe” or “MR compatible” (23). The website www.mrisafety.com provides exhaustive MR safety data for most medical devices. The information is regularly updated and is very accessible. Each device is categorized as “Safe,” “Conditional,” or “Unsafe.” The details are summarized in Table 1. 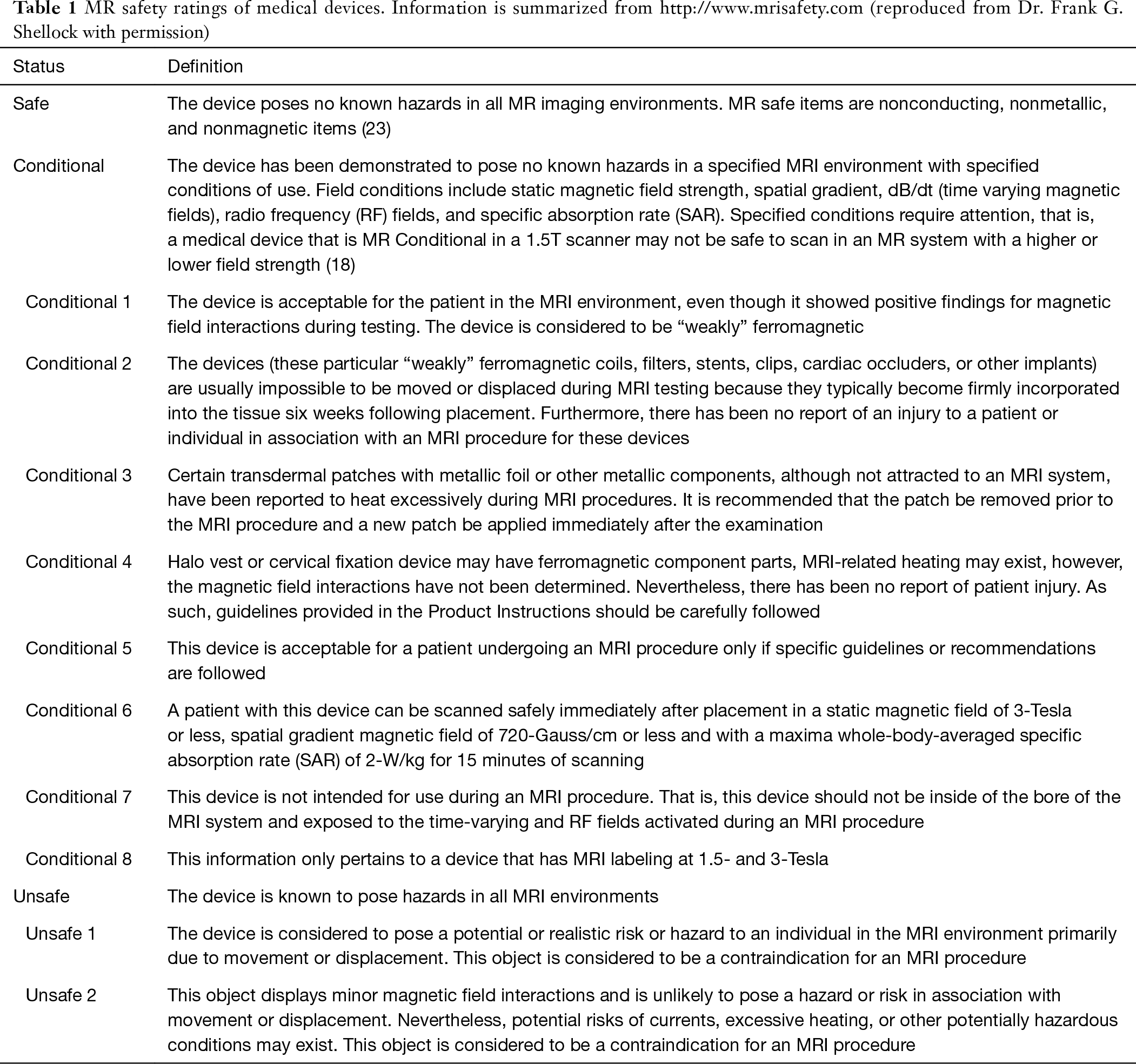 SS stents were the first clinical stents on the market. The vast majority are made of 316L SS, an austenitic containing 16–18% chromium, 10–14% nickel, 2.0–3.0% molybdenum, and no more than 0.03% carbon, 2% manganese, 0.75% silicon, 0.045% phosphorus, 0.03% sulfur, and 0.1% nitrogen by weight; the remainder is iron (25). 316L SS was recognized in the 1960s by the ASTM Medical and Surgical Materials and Devices Committee as the standard material for fabrication of surgical implants and has found many applications in clinical settings (26). SS implants meeting the International Organization for Standardization (ISO) 5832-l standard exhibit stable austenitic structures and are completely nonmagnetic (27). These implants will not move or become heated during MRI, although artifacts compromising MRI clarity may arise (27,28). However, austenitic SSs may become martensitic after machining and thus exhibit strong magnetism. Hence, stents made of martensitic SSs will be affected by MRI.

It is accepted that patients with ferromagnetic implants should not undergo MRI unless both the deflection angle and the extent of dislodgment are extremely small (29). Taal (30) used an ex vivo Perspex device to show that the Gianturco esophageal stent (an SS stent) was attracted to, and exhibited torque in, a magnetic field; however, direct evidence of dislodgment was lacking. Although no study has yet addressed the Gianturco tracheobronchial stent in terms of safety during MRI, the stent is made of the same material. Holton (31) used a suture to suspend an SS stent horizontally in a 4.1 T magnetic field. The angles of deflection from the vertical axis after alignment of the longitudinal axis were measured using a protractor. The 316L SS stent experienced a force of 5.2 µN at 4.1 T; theoretically, this would not injure tissues. In another study, the magnetic forces on coronary stents fabricated of surgical SS were determined by measuring stent magnetic dipole moments employing the on-axis magnetic field profile of an MRI magnet (32). The maximum force was 0.18 µN, thus even smaller than the gravitational force on the stent; no physiological impact would be expected. In general, SS stents are unlikely to undergo displacement. However, extreme caution should be exercised during MRI.

In addition, many studies have found that heating of SS stents in a magnetic field does not endanger patients. Wang (33) measured heating of metal implants in a 1.5 T MRI field; SS stents were heated to greater extents than titanium alloy stents. However, the temperatures of adjacent tissues increased by less than 1.0 °C; this was acceptable. Ho (34) used a computer model to estimate RF-mediated heating of tissues surrounding metallic implants during MRI. A metallic cylinder with 16 wires was implanted in the heart region of a realistic human and the maximum SAR was calculated. The temperature did not increase appreciably. Notably, the wire material differed from that of metallic stents. Hence, the results are not immediately applicable to all metallic implants.

Many studies have confirmed that SS stents induce significant artifacts during MRI. In one study, stents were embedded in 1% (w/v) gadolinium-doped agar, 3D phase images were obtained in a 1.5 T field, and susceptibility and shielding factors were determined; it was apparent that magnetization of a Palmaz stent would completely destroy the signal (35). In addition, Holton (31) showed that a 316 low-carbon SS stent caused dramatic ex vivo signal loss in a 4.1 T field. In another study, 18 stents made of different materials were placed in an environment simulating brain blood vessels and were studied in terms of 3 T MRI artifacts; SS stents were associated with severe artifacts (36). Adams (37) placed two SS stents in cadaveric femoral arteries subjected to 1.5 T MRI before and after stent deployment; the stent images were seriously distorted. Heinrich (38) suspended stents between two wooden sticks and immersed them in copper sulfate (CuSO4) solution within 1.5 and 3 T magnetic fields. The maximum artifact width in terms of stent diameter was measured using MR-Susceptibility Artifact Measurement (SAM) software. The maximum SS stent signal losses beyond the diameter were 6 mm [turbo spin echo (TSE) sequence] and 10 mm [gradient echo (GRE) sequence]. Burg (39) evaluated the in vitro lumen visibility of 22 different peripheral arterial stents (iliac, renal, and carotid) via magnetic resonance angiography (MRA). Stents were imaged at 1.5 T and lumen visibility was classified on a three-point scale (good, intermediate, and poor). Two SS stents were graded intermediate and five were poor. Another MRA assessment of coronary stents reached a comparable conclusion: SS stents were associated with the most pronounced intraluminal signal voids (40).

Nickel-titanium alloy, also termed nitinol, is a shape memory alloy with outstanding plasticity and excellent biocompatibility, wear-resistance, and corrosion-resistance, much superior to those of SS stents (41). Nitinol is non-ferromagnetic, exhibiting no dislodgment and only slight heating during MRI. Shellock (19) studied a nitinol airway stent [Elgiloy; 40% cobalt, 20% chromium, 15% nickel, 16% iron, 7% molybdenum, and 2% manganese (all w/w)] at 0° deflection under no torque. The temperature increased by 0.1 °C in a 1.5 T magnetic field, and no dislodgement, rotation, or tissue damage were noted. Holton (31) suspended a 54/46 nickel-titanium stent ex vivo in a 4.1 T magnetic field and observed no deflection.

Nitinol-associated artifacts during MRI are minimal. Wang (35) calculated the susceptibility and shielding factors of a nitinol stent in an in vitro magnetic field; signal loss was negligible. Similarly, Holton (31) observed only a slight increase in the signal void of an ex vivo nickel-titanium stent in a 4.1 T magnetic field as the echo time increased. In an ex vivo MRI assessment of 27 stents, the maximum signal loss beyond the actual diameter was less than 1 mm (TSE) and was 4 mm (GRE) for nitinol stents, thus much lower than for SS stents (38). MRA assessments have come to similar conclusions (39,40).

Clinical stents are produced by a variety of manufacturers using different materials, and the MRI safety ratings differ. We integrated data from www.mrisafety.com and manufacturers’ instructions to introduce the safety recommendation (Table 2). 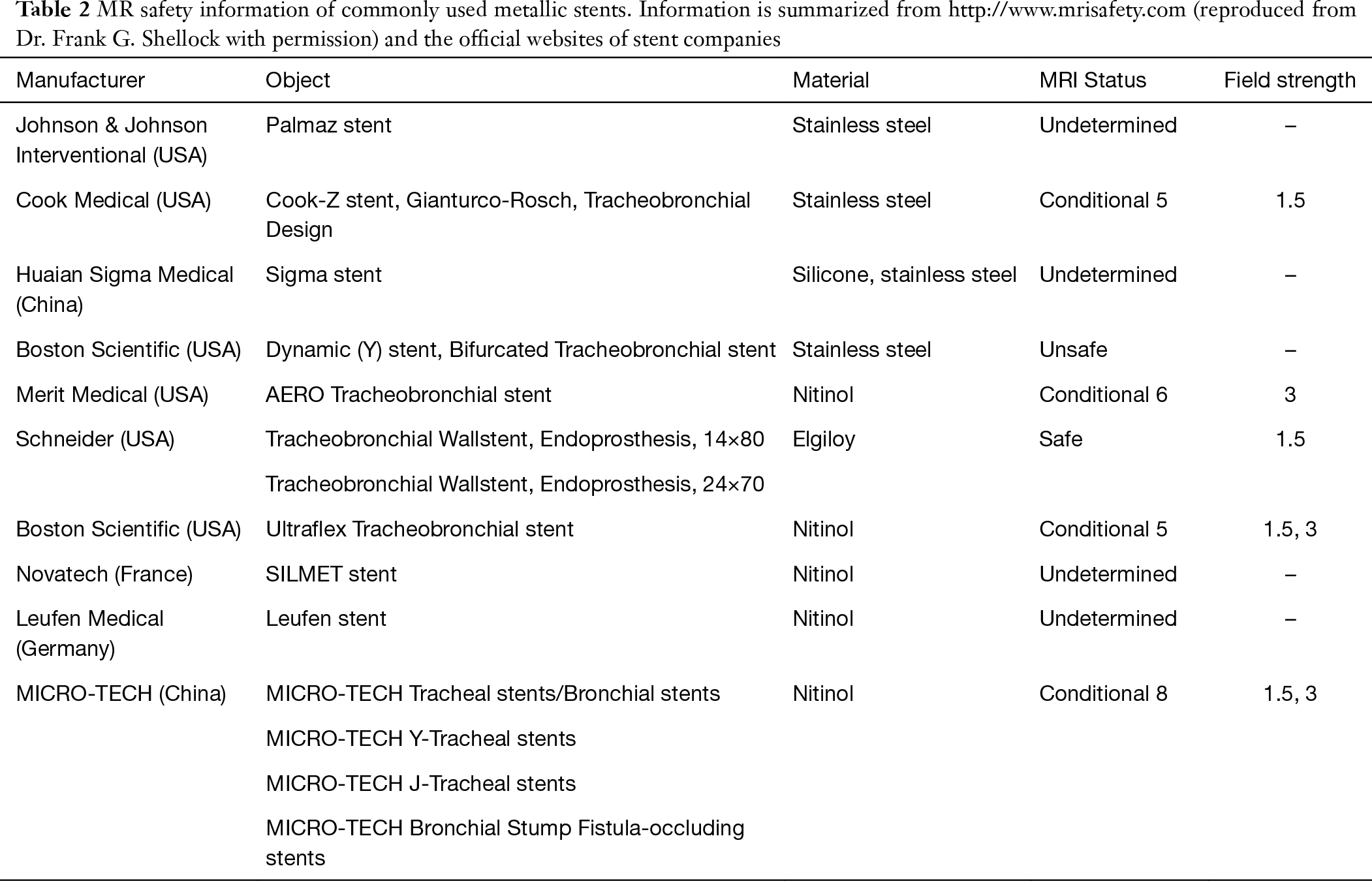 In general, MRI safety varies by stent material. Non-metallic stents are non-ferromagnetic and thus completely safe. SS stents that meet the ISO 5832-l standard are completely nonmagnetic and thus safe, although they produce artifacts. Magnetic SS stents may shift in the magnetic field and generate significant artifacts, affecting image quality. Thus, patients with such SS stents should not undergo MRI unless the risks are weighed and the manufacturer’s instructions are carefully followed. Nitinol stents cannot be dislodged, any heating effect is minimal, and no severe artifacts affecting image quality are created. Routine MRI is usually safe for patients with such stents.

We thank Dr. Frank G. Shellock for the kind advice to the paper.