The treatment of cancer has revolutionized in the past decade with the development of therapies directed at specific genetic alterations, serving as a panel of druggable targets. Among all cancer types, non-small cell lung cancer (NSCLC), harboring a spectrum of mutations, has the richest targeted therapy options, ranging from compounds in clinical development to FDA-approved drugs, targeting multiple oncogenic driver genes, including epidermal growth factor receptor (EGFR) (1,2), anaplastic lymphoma kinase (ALK) (3), c-ros oncogene 1 (ROS1), ERBB2, BRAF, MET and RET (4). The characterization of NSCLC into subtypes based on their genetic alterations has significantly improved the therapeutic efficacy of targeted therapies and disease outcomes in a subgroup of patients (1,2). Accurate companion diagnosis is necessary for patient selection prior to commencing these treatment options (5-7).

Currently, single gene testing methodologies, including but not limited to ARMS-PCR, FISH and IHC are often utilized in treatment-naive patients to profile driver mutations, such as EGFR mutations and ALK fusions for classifying patients against optimal treatments (8-10). However, each of conventional technique is associated with its own disadvantages, including the low-throughput nature, limitations in detecting certain types of aberrations and the need for subjective judgments during data analysis. DNA next-generation sequencing (NGS) allows for large-scale parallel sequencing and has proved to be an effective and accurate tool for the parallel profiling of different forms of genetic abnormalities including mutations, fusions, and amplifications across a large number of genes (11). It also allows for the identification of novel mutations which cannot be identified using PCR-based methods. Countless studies have reported its utility in diagnosis and treatment guidance across a wide spectrum of cancer types. Currently in lung cancer, NGS-based methods are often performed on samples obtained from patients who have progressed on prior treatments due to the likelihood of harboring multiple mutations.

Between January 2016 and September 2016, 61 treatment-naive patients with resectable NSCLC were enrolled in this study. This study was approved by the Institutional Review Board at Zhangjiagang First People’s Hospital. All patients gave informed consent to participate in the study and gave permission for the use of tumor tissues.

Sequence data were trimmed with Trimmomatic (12) for adaptor and mapped to the human genome (hg19) using BWA aligner 0.7.10 (13). Local alignment optimization, variant calling and annotation were performed using Genome Analysis ToolKit (GATK) 3.2 (14), Picards (http://picard.sourceforge.net/) and VarScan (15). Variants were filtered using the VarScan fpfilter pipeline. At least 5 supporting reads were needed for INDELs, while 8 supporting reads were needed for SNVs to be called. According to the ExAC, 1000 Genomes, dbSNP, ESP6500SI-V2 database, variants with population frequency over 0.1% were grouped as SNP and excluded from further analysis. Remaining variants were annotated with ANNOVAR and SnpEff v3.6. DNA translocation analysis was performed using both Tophat2 and Factera (16) and CNVs were analyzed with inhouse algorithm based on sequencing depth. 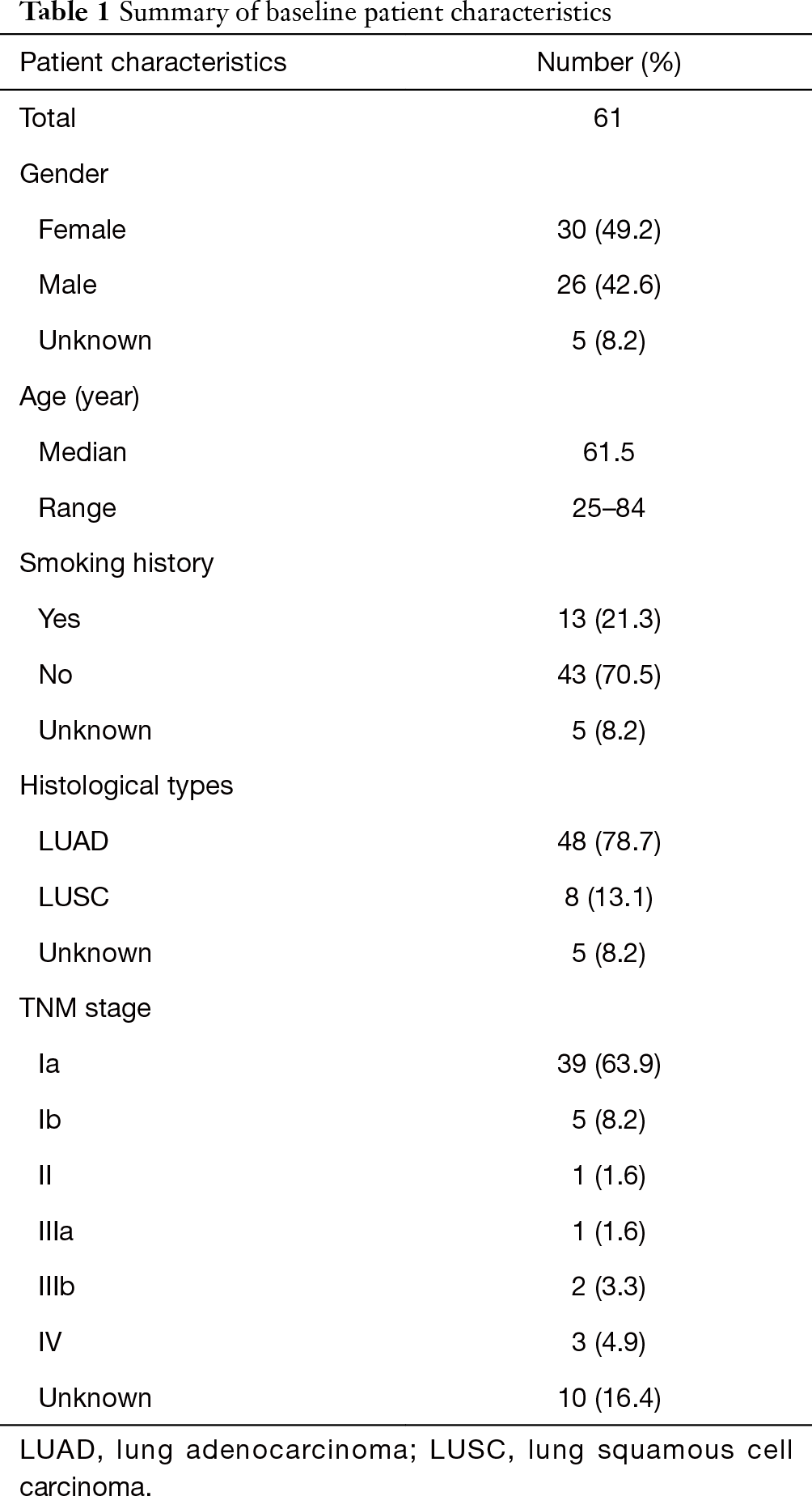 To elucidate driver mutations associated with each patient, we performed capture-based ultra-deep targeted sequencing using a panel consisting of all exons of 8 well-established driver genes for lung cancer, spanning 76 kb of human genome. We identified mutations from 80% (49/61) patients and the remaining 12 (20%) patients had no mutation identified from this panel. Collectively, 79 genetic variants were identified including 43 single nucleotide variations (SNVs), 28 insertions or deletions (INDELs), 4 copy-number amplifications (CNAs), and 4 translocations.

EGFR is the most frequently mutated gene, accounting for 44% of all variants identified (Figure 1A). Four types of EGFR mutations were detected in this study, including in-frame deletions in exon 19, single missense substitution mutation L858R, G719A, and exon 20 insertions. Of the EGFR somatic mutations, 83% of them were TKI sensitive mutations, including exon 19 deletions, L858R and G719A; 14% were EGFR-TKI resistant mutations, exon 20 insertion. Moreover, one patient was detected with EGFR G719A mutation (Figure 1B). 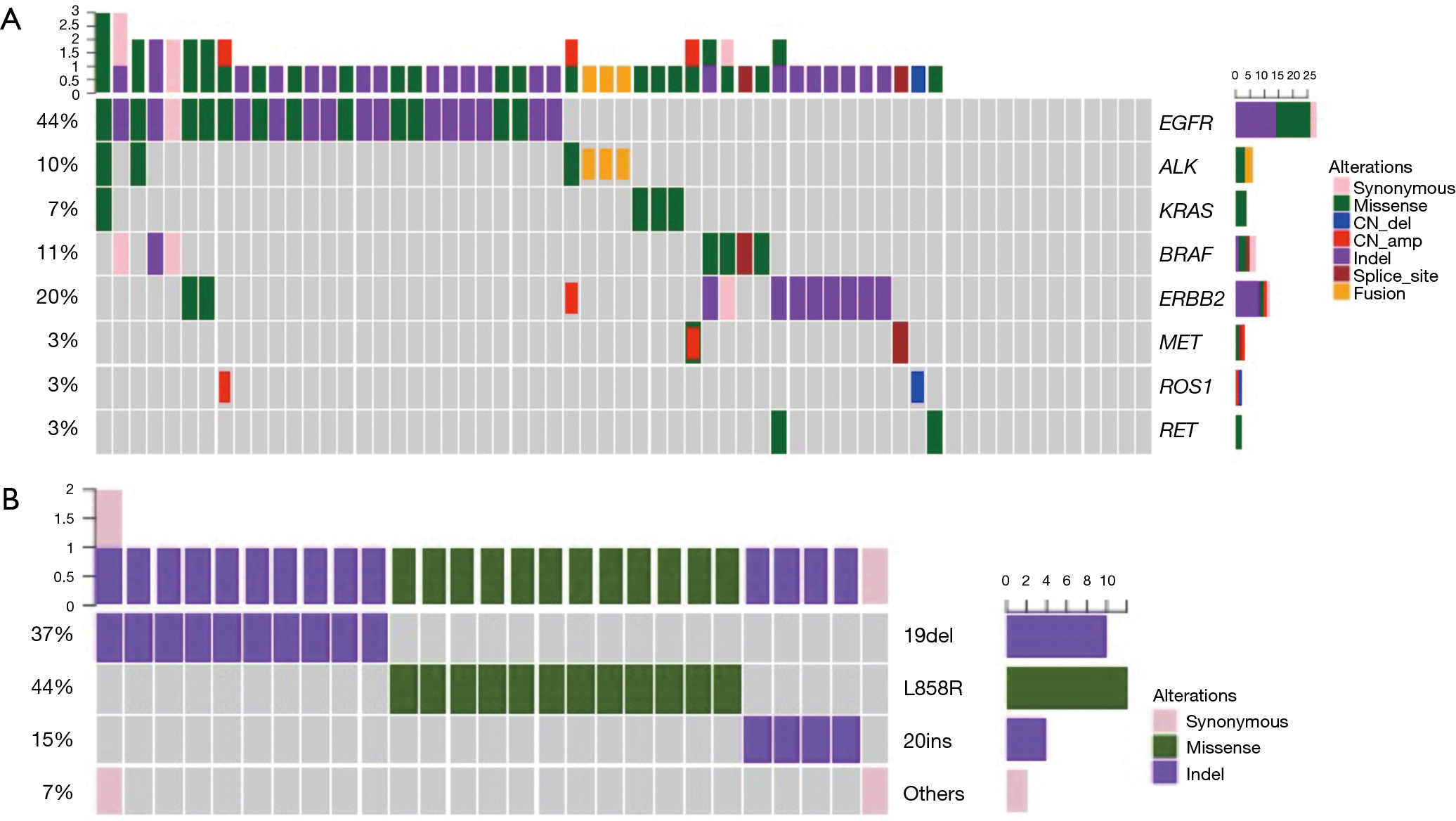 Twelve patients (20%) were identified with ERBB2 mutations. Among them, 13% of patients (8/61) harbored ERBB2 exon 20 insertion, higher than reported by previous studies, ranging from 2% to 4% (17-19). This variant located in ERBB2 tyrosine kinase domain and can affect protein function in a large extent (Figure 2).

Seven patients carried BRAF mutations; among them, one patient harbored a rare BRAF mutation K601E, which is not included in commercially available BRAF mutations detection kit. BRAF K601E, located between two major BRAF phosphorylation sites T599 and S602 in the activation loop in the vicinity of the classic mutation V600E, has been reported in melanoma (24) and follicular thyroid carcinoma (25).

ALK fusion was found in three samples (5%), and KRAS single missense mutation G12D in four patients (6.6%). ROS1 copy number deletion and RET mutation were also detected in our cohort. In addition, 12 patients (12/61) had no mutation identified from this panel.

Of all the patients harbored driver mutation, only one patient had dual driver mutations, harboring both EGFR L858R and KRAS G12D mutation (Figure 1A), in an agreement with previous findings that driver mutations exhibit mutually exclusive correlation in treatment-naive patients (26).

First, we interrogated the correlation of EGFR mutations and clinical features. We revealed that high prevalence of EGFR mutations was more commonly found in patients diagnosed at early-stage (P=0.0093, Figure 3A). EGFR mutation was significantly correlated with adenocarcinoma histology than squamous cell carcinoma (P=0.0052, Figure 3B). Tumors with EGFR-positive mutation were more likely to have alveolar (P=0.0004, Figure 3C) and papillary features (P=0.0053, Figure 3D) than that of EGFR-negative. As to expression of IHC markers, we observed that patients harboring EGFR mutation commonly had high expression of TTF1 (P=0.0003, Figure 3E), and low level of P40 (P=0.0184, Figure 3F) and Ki67 (P=0.0109, Figure 3G), compared to EGFR-negative patients. 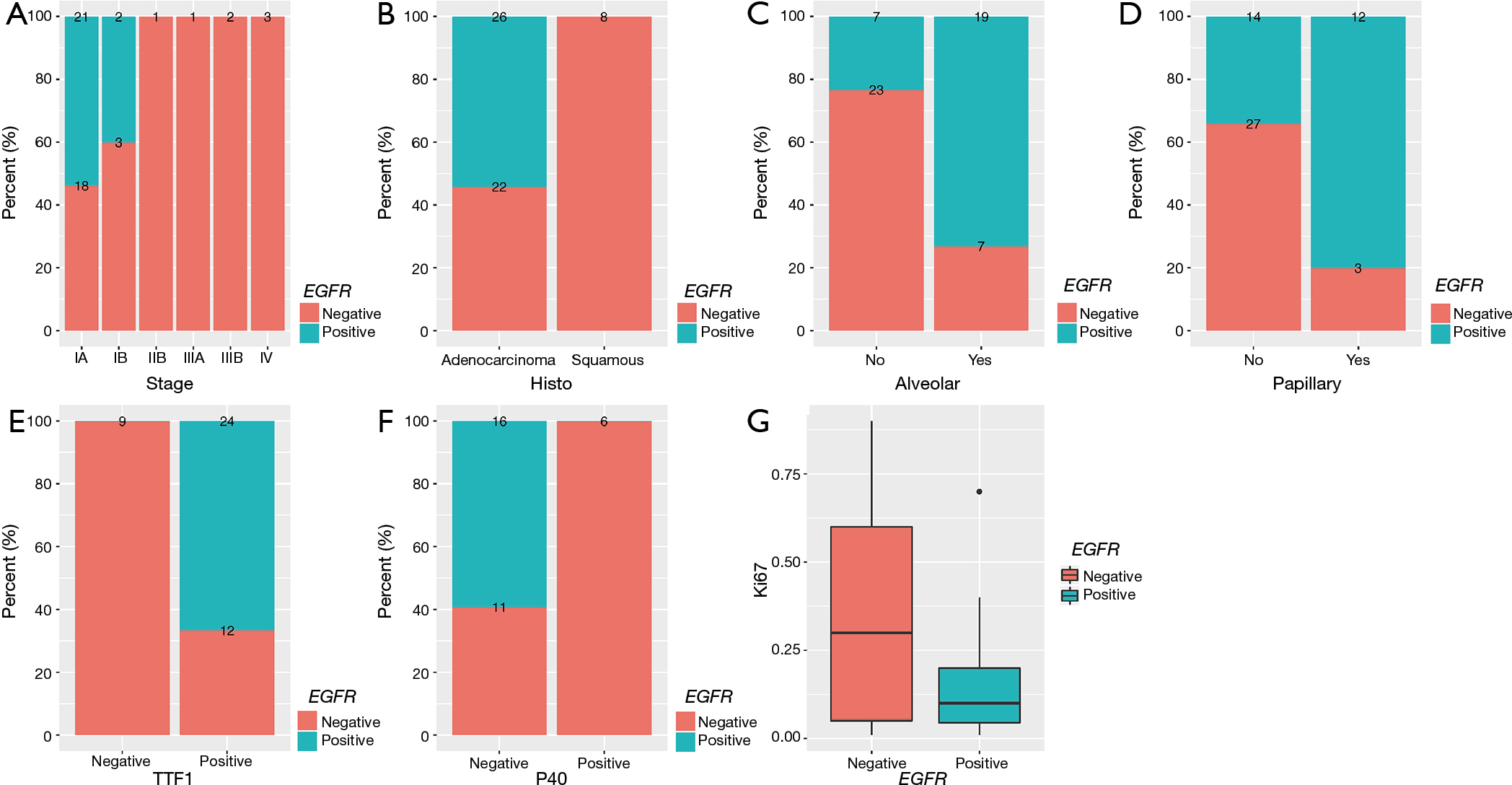 Figure 4 Correlation of ERBB2 or ALK alterations and clinical features. (A) ERBB2 were more prone to occur in younger age. (B) Tumors with ERBB2 mutations were associated with micro-invasive potential. (C) ALK-mutated tumors have more probability to relapse.

In this study, we investigated the potential of introducing NGS-based testing methods to treatment-naive patients in a cohort of 61 treatment-naive patients by performing capture-based ultra-deep targeted sequencing using a panel consisting of 8 well-established driver genes for lung cancer. Our data revealed that 80% of patients carried driver mutation, which exhibits a mutually exclusive relationship with each other except for one case. Our data also reveal rare mutations, which can not be identified using PCR-based methods. This study highlights the potential of NGS in treatment-naive NSCLC patients. Moreover, most of previous studies were focusing on distinct molecular feature of lung cancers. Here, we clarified the spectrum of well-established oncogenic driver mutations in a Chinese treatment-naive lung cancer cohort, and analyzed the correlation between driver alterations and clinical characteristics.

Currently, single gene testing is often performed on treatment-naive patients to detect mutations to guide subsequent treatment. NGS-based methods are often used in patients who have developed resistance to prior therapies. Single gene testing methods, such as amplification refractory mutation system polymerase chain reaction (ARMS-PCR), fluorescent in situ hybridization (FISH) and IHC, are associated with a few pitfalls, including but not limited to detection of known variants, limited ability in multiplexing, and involving subjective judgement (27). Our study demonstrated that NGS-based methods allow for large-scale parallel sequencing to detect a wide range of genetic mutations simultaneously.

Using NGS, we identified numerous mutations that are not covered by commercially available testing kits, such as EGFR exon 20 insertions, ERBB2 exon 20 insertions, MET exon 14 skipping and BRAF K601E. Although the traditional method ARMS-PCR is often utilized to detect mutations in treatment-naive patients, all above mentioned mutations are not covered by commercially available kits. Thus, patients harboring such mutations may miss therapeutic opportunities if subject to test using commercially available single gene testing kits. It has been reported that patients with MET exon 14 skipping are responsive to crizotinib and positive detection of exon 14 could guide following targeted therapy for clinical benefit achievement (28). BRAF K601E located between two phosphorylation sites in BRAF activation domain (29,30). Preclinical studies reported that MEK inhibitor, trametinib (Mekinist, GSK1120212) can block the downstream signaling induced by BRAF K601E mutation (31,32), which implies that BRAF K601E mutation maybe sensitive to trametinib. Therefore, NGS should be recommended when multiple genes need to be tested.

In addition, our data revealed that 20% of patients in this cohort did not carry mutation from this panel. Several potential reasons might be responsible for this. This may attribute to tumor heterogeneity that the sampled tissue did not carry driver mutations. Another possible explanation can be the relatively low tumor content in the biopsy tissue. Furthermore, there are a significant percentage of patients who do not harbor driver mutation. Their cancer is not driven by driver mutations but another mechanisms or mutations which are not covered by our panel. Collectively, in this study, we revealed the essentialness of introducing NGS-based testing methods to treatment-naive patients.

Although NGS has been widely regarded as a powerful tool to accurately detect gene alterations in a high-throughput scale, it still has its own limitations (33,34). First, the period for NGS procedure is commonly longer for clinical diagnosis when compared to conventional methods such as ARMS-PCR and FISH. Second, the cost is an obstacle for patients to choose NGS for mutation identification. Third, the accuracy of new platform may less accurate than conventional method on specific mutation type identification. However, although challenges were created by these limitations, we should keep in mind that NGS will continue to be improved and optimized with respect to these disadvantages.

Nowadays, translational medicine has progressed to the point where patients can be stratified basing on the correlation of clinically relevance and molecular features (35,36). This kind of association might be helpful for diagnosis and patient selection for specific tumor mutations in clinical trials. There have been many studies examining the relationship between patient characteristics and oncogenic driver mutations in NSCLCs. However, several data were conflicting among different studies (37-40). Here, on the basis of oncogenic driver mutation identified by NGS, we conducted this kind of investigation in our study and tried to interrogate the underlying clinical features of tumors with different driver mutations in this treatment-naive Chinese NSCLC cohort. The presence of EGFR mutations in a subset of NSCLC were associated with a favorable prognosis in cancer patients treated with EGFR tyrosine kinase inhibitors (TKIs) (1,41). Identification of EGFR mutated-patients may indicate potential sensitive patients who would be benefit from EGFR-TKI. In this study, we found that EGFR mutations were correlated with early stage, indicating that this well-known oncogene driver mutation was acquired in early step of pulmonary carcinogenesis. Next, we evaluated whether morphological features reflect EGFR mutation status. We found that EGFR mutations were more frequently observed in tumor with alveolar or papillary components than that without such components. Our results revealed that tumors with overexpressed TTF-1 and low expressed P40 and Ki67 would have more EGFR mutations, which indicated that these immunohistological markers such as TTF-1, P40 and Ki67 can predict EGFR mutation. These results suggested that EGFR mutation test should be performed in tumors with such clinical features. Gene alterations in the ERBB2 or ALK also identify distinct subsets of NSCLC and represent a therapeutic target with already proven sensitivity to ERBB2 or ALK inhibitors in clinical settings. Here, we found ERBB2 mutations were correlated with younger age and micro-invasive potential. ALK mutations indicated further relapse probability of tumors. Although discrepancies could be introduced by the limited number of cases, these findings suggested that these clinical characteristics could be served as indicators for presence of ERBB2 and ALK mutations.

We thank all the patients and their families for their participation. We thank all the physicians who gave constructive comments. We thank Dr. Han Han-Zhang and Dr. Tengfei Zhang from Burning Rock Biotech for the valuable discussion and writing assistance. We also thank Dr. Ben Van der Zeijst and Dr. Peter Ujhazy for the suggestions of manuscript.

Ethical Statement: This study was approved by the Institutional Review Board at Zhangjiagang First People’s Hospital (No. 2017003). Written informed consent was obtained from patients for this study and publication of this manuscript.