The optimal treatment strategy for PA is still unknown (3,4). However, no matter what treatment is taken, therapeutic strategy aims at preventing life-threatening hemoptysis. Since the first surgical resection of aspergilloma was performed by Gerstl in 1947 (5). Surgery is considered a permanent cure for aspergilloma.

Since then, surgical treatment of PA has been extensively reported. Surgery remains the most common form of management for aspergilloma because of the absence of an effective alternative (3,4). Previous reports showed that surgery for PA had high mortality and morbidity (6,7), and the potential complications of PA include bronchopleural fistula, empyema, pneumonia, wound infection, bleeding, atelectasis, respiratory failure, residual pleural space, persistent air-leak, and death (6,8). However, this modality has been suggested as an alternative process to open surgery for PA (3) due to much progress made in video-assisted thoracic surgery (VATS) over the last few decades, which may reduce complications and the length of hospitalization. However, the usefulness of an adjuvant antifungal agent after pulmonary surgery for PA is still controversial. Antifungal therapy might be needed to avoid recurrence of PA when definitive surgical removal of PA is impossible (9). Nevertheless, there is no definite supportive evidence to reach consensus regarding the role of adjuvant antifungal agents after complete resection without spillage of fungal material (3,10,11), especially with VATS. We hypothesized that, for patients with PA undergoing total thoracoscopic resection, whether for simple aspergilloma or complex aspergilloma, antifungal therapy may not be needed after the operation. Therefore, we undertook this study to evaluate the influence of postoperative antifungal agents on outcomes of surgical treatment for PA. We believe our findings will help determine the optimal treatment strategy for PA to achieve the best therapeutic results.

The medical records of 22 PA patients who underwent an operation between December 2014 and January 2018 were retrospectively reviewed. We analyzed clinically significant variables, including age, gender, preoperative symptoms, computed tomography scan image findings, perioperative details, postoperative mortality and morbidity, and long-term outcomes. Because of the study’s retrospective design, individual patient consent was waived by the Institutional Review Board of Beijing Chaoyang Hospital. All patients with PA who received perioperative antifungal agents were included in group A (12 patients), and the 10 patients who were treated with surgery without any antifungal therapy were included in group B.

PA was diagnosed according to radiological appearance, positive serology results for Aspergillus, mycological samples (bronchoalveolar lavage fluid), or postoperative histological findings. All patients had pathologic confirmation of PA. As per a previous report (12), all aspergillomas were retrospectively categorized as either simple aspergilloma (SA) or complex aspergilloma (CA) based on CT-scan images. SA and CA were distinguished by cavity wall thickness (<3 and >3 mm, respectively). Furthermore, CA was characterized by surrounding parenchymal disease and concomitant pleural thickening, while SA was characterized by surrounding normal lung parenchyma.

We preferred wedge resection or segmentectomy as priorities if the lesion met the following criteria: (I) localized unilateral PA, (II) less than 3 cm in size, (III) located in the outer one-third of the peripheral lung, and (IV) a safe resection margin greater than 2 cm. If a safe resection margin larger than 2 cm was not guaranteed or there were massive adhesions, absence of interlobar fissures, intense fibrosis, or inflammatory resections around vessels of the hilum, lobectomy was performed.

The follow-up data were acquired from outpatient charts and telephone calls to patients or their families. Postoperative mortality and morbidity occurring within the period between the date of the surgical procedure and postoperative day 30 were defined as deaths and complications, respectively.

The details of clinical characteristics of the patients in groups A and B are summarized in Table 1. The two groups had no significant differences in terms of age, sex, underlying pulmonary diseases, or aspergillosis type. 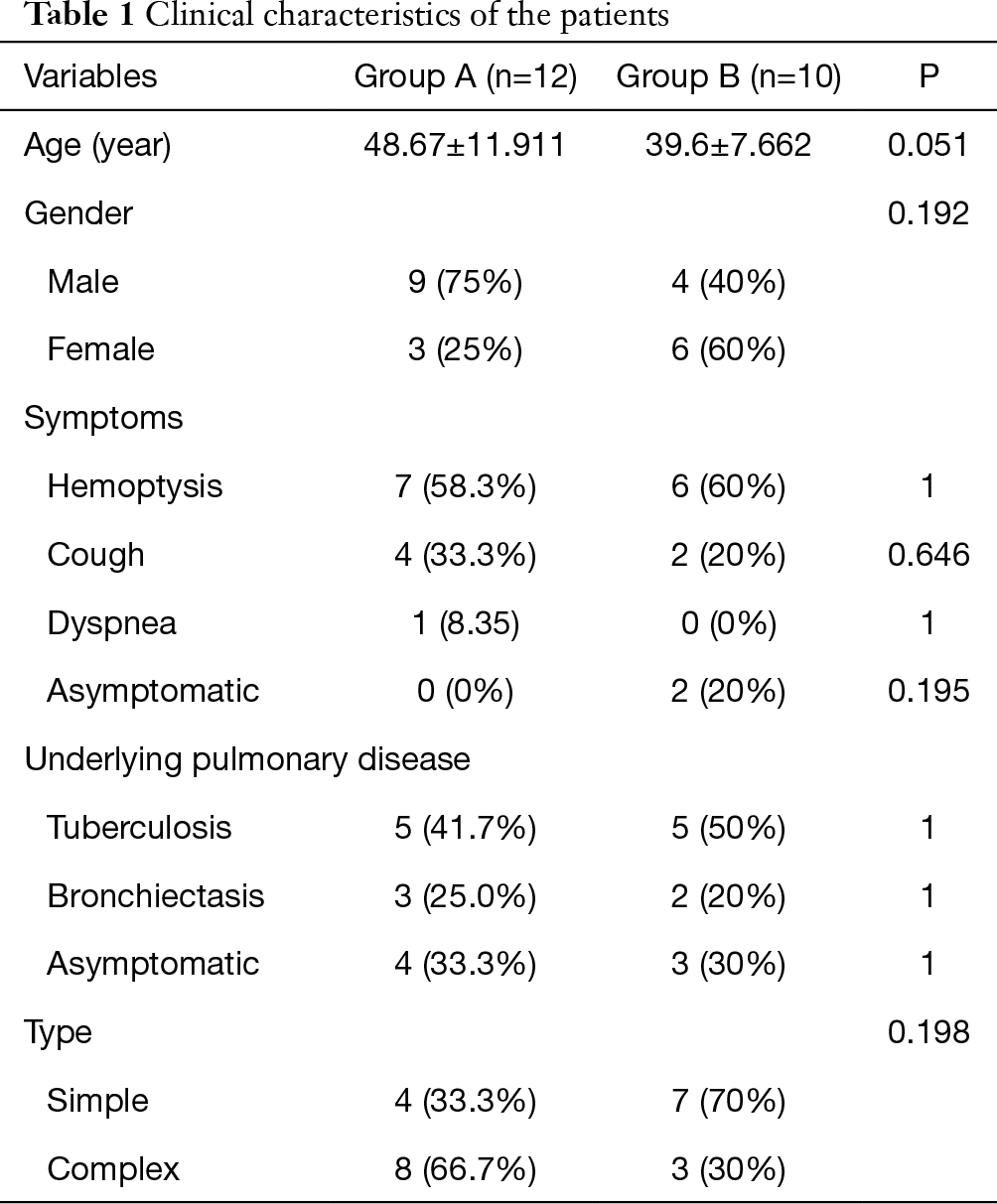 During the study period, 9 female (41%) and 13 male (59%) patients were diagnosed with PA, with a mean age of 42.5 years (ranging from 30 to 63 years). No patients were immunocompromised. Twelve of the 22 patients (55%) experienced hemoptysis, the most common symptom, of which 10 patients had severe hemoptysis (>100 mL/day), and 2 patients had life-threatening hemoptysis. The 2 patients all received lobectomy. The next most common were cough (6 patients, 27%), and dyspnea (1 patient, 4.5%). There were no symptoms in 2 cases.

Twenty patients were scheduled for elective surgery, and 2 patients underwent emergency surgery because of massive hemoptysis (Table 2). In group A, five patients were serologically confirmed before surgery, and received antifungals both preoperatively and postoperatively. The other 7 patients only received oral antifungal agents after surgery. Itraconazole was the most common antifungal agent, followed by voriconazole and fluconazole. In group B, all 10 patients only underwent surgery and received no adjuvant antifungal therapy after surgery.

All 22 patients underwent a VATS procedure. The most common procedure was lobectomy, followed by wedge resection, segmentectomy and pneumonectomy. The patients in group A underwent lobectomy (P=0.03); patients in group B received wedge resection (P=0.02). All lesions were resected completely, and intraoperative dissemination was carefully avoided. Ten patients (45.5%) experienced complications after surgery, including 7 (58.3%) in group A and 3 (30%) in group B. Regarding the postoperative morbidity, there was no significant difference between the groups (P=0.231). No patients required re-exploration in either group. There was no perioperative mortality. The postoperative morbidity is shown in Table 3 in details. Follow-up was completed for all 22 patients, with duration ranging from 1 to 38 months (median of 19 months). During follow-up, there were no deaths due to pulmonary problems, recurrence of disease or lesion relapse in either group. 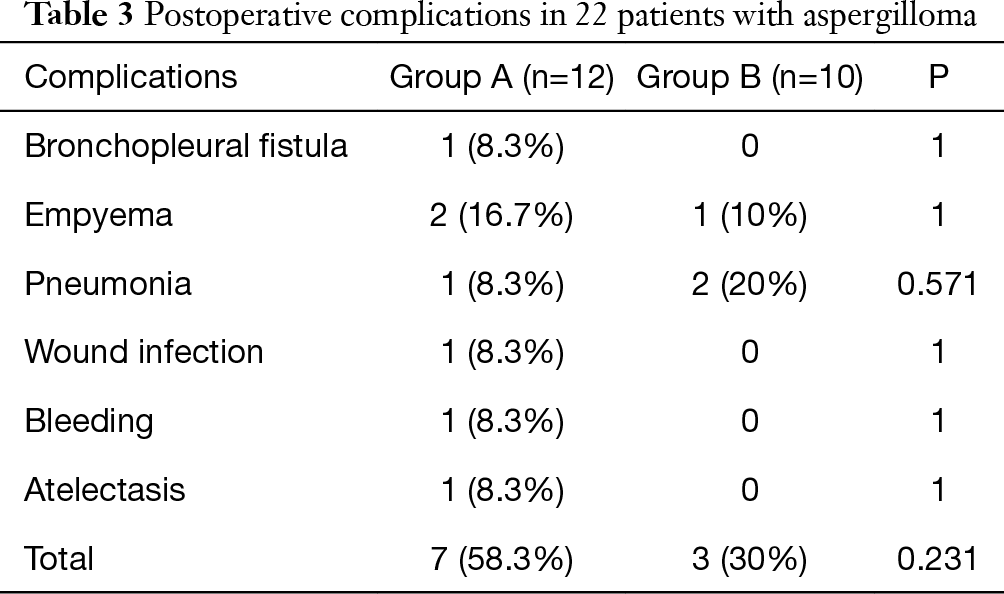 The role of antifungal agents following definitive surgical removal of a single aspergilloma has not been supported by solid evidence (10,11,13). Peri-/postoperative antifungal therapy is not routinely required, except when it is intended to prevent Aspergillus empyema or to avoid recurrence of disease when surgical spillage of the aspergilloma occurs (4,9). No randomized control trials have been carried out regarding the postoperative use of adjuvant antifungal agents for immunocompetent patients. Sagan et al. (11) performed the only study in the last 23 years that compared the efficacy of adjuvant antifungal treatment (32 patients) with no treatment (40 patients) following aspergilloma resection. In their retrospective study, both univariable and multivariable analysis indicated that perioperative antifungal pharmacotherapy did not contribute to the outcome of surgical removal of PA. Brik et al. (14) reported similar outcomes without using preoperative antifungal treatment. In our study, the retrospective comparison between the groups with and without applying adjuvant antifungal therapy yielded no statistically significant difference in terms of postoperative morbidity or recurrence.

The filamentous Aspergillus species invades the body via the respiratory tract and proceeds to colonize the bronchi and lungs. PA commonly encountered in clinical practice arises from Aspergillus in humans (15). Most cases of PA develop in a preexisting cavity, including tuberculosis, bronchiectasis, bronchial cysts, and emphysematous bullae (2,16). The factors enhancing the establishment of the fungus in particular patients have not been fully addressed. By far the most commonly associated condition reported was tuberculosis. Radiologic evidence has revealed that up to 11% of patients with pulmonary cavities after tuberculosis demonstrated aspergilloma (17). Tuberculosis was previously confirmed to be the most common predisposing disease, ranging from 22.3% to 89% (8,14,18,19); this was also the case in our study.

Hemoptysis is believed to be the most common symptom associated with PA (14,15,18,20,21). In our study, 59% of patients suffered from hemoptysis. Life-threatening hemoptysis requires emergency procedures. Considering the high mortality caused by hemoptysis associated with PA, pulmonary resection has been an effective management for PA.

The most appropriate strategy for treatment of PA remains controversial and there is no consensus (1,3,4,21-23). Surgical resection is considered as the treatment for PA, particularly in symptomatic patients. Previous reports (24,25) stated that all patients with high risk should undergo pulmonary resection, to prevent life-threatening asymptomatic or symptomatic hemoptysis. With the development of surgery, lung resection in selected PA patients can be performed with low mortality and morbidity. VATS for PA, if applicable, might be superior to open surgery in terms of safety and efficacy (7,19,23,26). Many studies comparing VATS with thoracotomy have shown that VATS has the advantages in terms of less pain, fewer complications, less incision, and shorter hospitalization (7,19,26,27). Surgical removal is generally performed by an open surgery because of obvious pleural adhesions and calcified lymph nodes located near pulmonary arteries and veins. We safely carried out VATS for all patients. Standard lobectomy was the preferred surgical procedure for 11 patients in this series. Segmentectomy and wedge resection can be considered, provided that the aspergilloma is small enough and is located in the lung periphery. It was suggested by Shirakusa and colleagues (28) that, because of the saprophytic character of the organism, it is desirable to limit the resection as much as possible, so as to avoid decreasing lung function. Their analysis was based on the age distribution from 10 to 20 years observed in previous aspergilloma reports (29,30). Postoperative complications mostly depend on the underlying pulmonary disease (23). In this study, 45% of patients experienced postoperative complications, considered acceptable compared with previously reported figures (7,14,23)). In Group B, mild aspergilloma and lesions located at the periphery of the lung were predominant. Complex PAs usually develop in patients with benign cavity pulmonary disease such as tuberculosis and bronchiectasis, making the surgical procedure more difficult. The procedure lasts longer than lung resection for lung cancer, and the intraoperative and postoperative blood loss is relatively high, as is the rate of postoperative complications.

Nevertheless, due to its retrospective design, the number of included patients was small, and the type of antifungals and the duration of treatment were not homogenous throughout the study period. A prospective randomized multicenter trial with a larger population is needed in the future to further validate the findings.

In previous reports, the overall 5- and 10-year survival rates in surgically-treated patients were in the range of 75–84% and 74–92%, respectively (8,18,31). Aspergillosis recurs in 5–7% of patients undergoing surgery, most commonly due to: insufficient extent of primary lung resection (usually wedge resection), the presence of post-tuberculous cavities or bronchiectasis in the remaining lung parenchyma, and continuation of immunosuppressive treatment (6,31). To date, in our study, with total removal of PA, there has been no recurrence of hemoptysis or death in the follow-up period in either group. Therefore, careful long-term follow-up is recommended. Because the number of patients was relatively small, further study is needed to validate the reproducibility of our outcome.

Our data appeared not to support the advantageous role of adjuvant antifungal therapy after definitive surgical removal of a fungus ball in immunocompetent patients.