Lung cancer accounted for 27% of all cancer deaths in the United States of America (USA) in 2014, and is the leading cause of death among cancers in both men and women in the USA (1). Survival however depends largely on stage of diagnosis, and as screening and early cancer-detection become more widely accepted, lung cancer can be diagnosed more frequently at earlier stages with a marked increase in overall survival (OS) rates (1).

Surgical resection has been emphasized as the standard of care and the most effective treatment for early stage non-small cell lung cancer (NSCLC) (2,3). Although more than 80% of lung cancers are classified as NSCLC and are thus candidates for surgery, approximately 25% of these patients do not undergo surgery (4,5). Some of these patients are judged to be inoperable due to medical conditions and comorbidities, while other patients refuse surgery (2). As an alternative, radiation therapy was developed as an additional treatment for NSCLC (2,6,7).

The comparative effectiveness of SBRT versus surgery in early stage lung cancer is still a topic of debate. A systematic review examining 2-year survival and local control following SABR in NSCLC patients reported equivalent short-medium term survival outcomes to surgery, and put forth SABR as an alternative to surgery (10). Two randomized controlled trials [STARS (17) and ROSEL (18)] attempted to compare SBRT and surgery in the treatment of NSCLC. However, both trials have been closed early due to low recruitment. A pooled analysis of these two trials suggested a better 3 years survival with SBRT in comparison to surgery (19), although a meta-analysis comparing the effectiveness of SBRT and surgical resection in stage I NSCLC concluded that 3-year survival of sublobar resection and SBRT is comparable for stage I NSCLC patients (14). Although surgery is the recommended treatment for early stage NSCLC, those who support SBRT suggest that, once patients’ characteristics such as age, comorbidities, performance and overall health are taken into account, SBRT can be considered a comparable treatment to limited resection.

Given the relevance of determining the most beneficial long-term treatment, the primary objective of this meta-analysis was to compare 5-year OS of wedge resection and SBRT in patients with stage I NSCLC.

Original research articles reporting 5-year OS of patients with stage I lung cancer undergoing SBRT or wedge resection were identified through the National Library of Medicine and National Institutes of Health PubMed database. The following keywords were included in the search strategy: “Stage I”, “lung cancer”, “SBRT”, “surgical resection” and “SABR”. Research published between 1995 and 2017 was included, and the references of selected articles were searched for additional publications. Articles were first screened by title and abstract, and then by full-text if appropriate.

Studies were considered eligible if they met the following inclusion criteria (Figure 1): (I) patients were diagnosed with stage I lung cancer; (II) data on 5-year OS were provided or could be extrapolated from published results; (III) patients were treated with SBRT or SABR, which are equivalent radiation treatment strategies; (IV) the total dose was administered in 5 fractions or less for domestic studies; (V) the majority of patients were treated with a total dose of >40 Gy; (VI) staging was performed with at least a computed tomography (CT) scan; (VII) surgical procedure was a wedge resection, regardless of whether it was performed via open thoracotomy or video-assisted thoracic surgery (VATS); (VIII) data were reported in English. There was no minimum sample size for inclusion. Studies were excluded according to the following reasons: (I) reviews, meta-analyses, editorials, commentaries, SEER re-analyses, conference abstracts; (II) lack of key information for calculation of 5-year survival; (III) patients with lung cancer more advanced than stage I; and (IV) surgical procedure other than wedge resection. 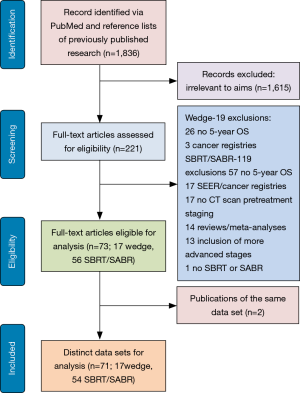 All relevant characteristics were extracted from each article and recorded including author names, year of publication, duration of study, country of study, number of patients treated with SBRT or wedge resection, gender, median or mean age, histology, tumor stage, 5-year survival, median and range of follow-up, the dose/fraction radiation criteria, and if the study was performed on operable or inoperable patients. The primary endpoint of this study was 5-year OS. Data extraction was performed by two independent researchers (SR and WL-C). Data extraction was then performed independently using a standardized data extraction form. Disagreements were resolved by a third reviewer (ET) according to a predefined protocol. The NIH’s Quality Assessment Tool for Observational Cohort and Cross-Sectional Studies was used to determine the quality of included studies (23).

Data were processed and analyzed in R (version 3.4.2; R Foundation for Statistical Computing, Vienna, Austria), and a summary estimate that accounted for the sample size of each study was calculated. The combined percent survival was calculated using random effect models. Funnel plots were created in order to assess publication bias (Figure S1). Heterogeneity was tested using the Q statistic and the I2 statistic, with I2<25%, 25% to 50% and >50% representing a low, moderate and high degree of heterogeneity, respectively (24,25). Where necessary, median age was converted to mean age (26). 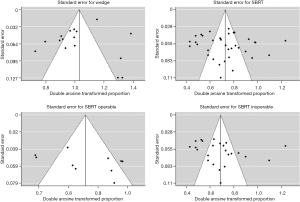 Search results and characteristics of studies

The PubMed search yielded 1,836 potential articles. After screening titles and abstracts, 221 articles were found to be relevant and were reviewed in full text, which resulted in the exclusion of an additional 148 articles. Twenty-nine articles on wedge resection were further excluded due to the absence of 5-year OS data (n=26) and the inclusion of data from cancer registries (n=3). In total, 119 articles on radiotherapy were further excluded due to the lack of 5-year OS data (n=57), stemming from cancer registries and SEER data (n=17), lacking baseline staging with at least CT scan (n=17), reviews and meta-analyses (n=14), including advanced cancer stages (n=13), and reporting on conventional radiation therapy (n=1; Figure 1). This left 73 articles including 71 distinct data sets which were utilized in the present meta-analysis (Tables 1,2, and http://jtd.amegroups.com/public/addition/jtd/supp-jtd.2018.09.140-1.pdf). 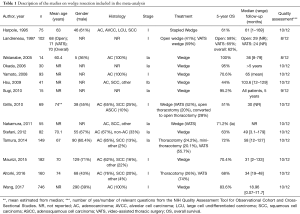 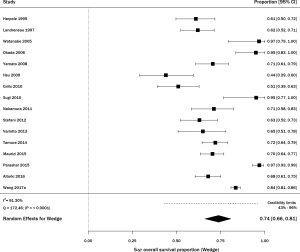 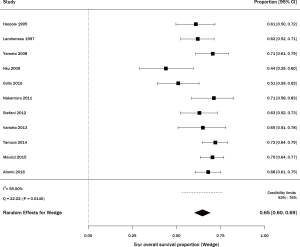 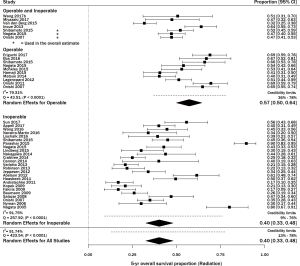 Analysis according to stage 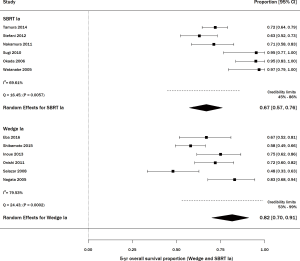 In the present study, 5-year survival in stage I lung cancer was compared between patients treated with wedge resection or SBRT. This study suggests that wedge resection overall generated significantly higher survival rates than SBRT treatment. It is apparent that studies on SBRT included older patients and patients who are less likely to be operable compared to studies on wedge resection. Patients eligible for SBRT are staged clinically, while surgical patients are staged pathologically, and this may contribute to the difference in outcomes between the two groups. The included publications indicate that SBRT is used in patients who cannot afford surgery because of age or comorbidities, as well as in high-risk and medically inoperable patients; these patients may have worse OS because of their own prognostically negative baseline characteristics. These aspects have to be taken into account when comparing the survival rates between SBRT and wedge resection in retrospective studies.

The present analysis shows that long-term survival for medically operable patients treated with SBRT was significantly higher than the survival observed for medically inoperable patients. From this data, we assessed that patients who would be fit for surgery have a much higher chance of survival when treated with SBRT versus patients who are not candidates for surgery. If a patient who is judged operable refuses to undergo surgery, he/she can be considered for SBRT as an effective, less invasive treatment option.

Another conclusion deriving from this meta-analysis is that the medical status of the patient is very important when assessing survival rates of stage I NSCLC, and when comparing SBRT to surgical resection. There were only 10 studies out of the 36 SBRT studies that reported the 5-year survival of operable patients specifically (11,12,15,47-50,52,58,65), and additional studies on medically operable patients should be conducted to have a larger sample size and provide more definite conclusions. Also very few studies [6 studies for wedge resection (11,41,46,48,50,53) and 6 studies for SBRT (29,30,32,34,35,39)] reported enough information to assess the outcomes of each treatment based on staging. When comparing stage IA patients treated with either wedge or SBRT, improved overall survival was observed with both treatments, although wedge was superior to SBRT. More studies should be conducted on the effectiveness of these treatments in stage IA NSCLC.

To date, only two observational studies directly compared clinical outcomes of SBRT and wedge resection in stage I NSCLC (21,22). The two studies yielded very different conclusions: Parashar et al. reported high survival rates for both procedures (22), while Varlotto et al. indicated very poor 5-year survival rates for SBRT, around 32% in the matched population (21). This result is likely due to the inequal distribution of patient characteristics; patients in the SBRT group had more comorbidities and worse pulmonary function than patients in the wedge resection group. These findings confirm that comorbidities, pulmonary function, prior medical history and performance status are important factors influencing the OS.

The STARS and ROSEL trials were two independent, randomized trails comparing SBRT and surgery in patients with operable stage I NSCLC (17,18). Unfortunately, both trials were closed early due to low accrual. A pooled analysis of these two trials found that patients in the SBRT group had a higher 3-year OS than patients in the surgery group, 95% and 79%, respectively (72). The authors mentioned that lower survival after surgery might be associated with a worsening of comorbidities related to the surgical reduction of lung function. The results of this pooled analysis should be interpreted with caution because only a very small portion of the intended sample size (2.3–3.5%) was enrolled before the trials were closed and follow-up was limited (19).

This study has some limitations, the most prominent of which was heterogeneity and the lack of consistency in reporting information in articles spanning over 12 years, from 2005–2017. Study populations were heterogeneous, and their description and characterization were very minimal, which prevented any further in-depth analysis of covariates associated with outcomes. Additionally, many possible confounders such as age, gender, clinical stage, histology, comorbidities, pulmonary function and performance status were missing from many of the studies, which prevented a thorough comparison across procedures. Many studies did not report the location (central or peripheral) of tumors, which influences SBRT regimes and thus survival. Additionally, the biological effective dose (BED) was not always mentioned, which limited the ability to conduct sub-analyses of the survival of patients receiving high doses of radiation (BED >100 Gy). Furthermore, there was variability in the prescribed dose regimes for SBRT studies between studies conducted in the USA, where Medicare defines SBRT as 5 fractions or less, and those conducted internationally. This limits the comparability among SBRT articles.

There was a dearth of studies directly comparing wedge and SBRT, and only two studies included a direct comparison of wedge and SBRT patients (21,22). Another main limitation was that many of the available studies from the initial search limited their follow-up to 2–3 years, and did not provide clear 5-year OS data. Given the excellent curability rates of stage I NSCLC, longer follow-ups are necessary in order to fully evaluate the success of each procedure, and make more definite conclusions about the benefits of wedge and SBRT.

This meta-analysis comparing long-term survival after wedge resection and SBRT in the treatment of stage I NSCLC suggests that wedge resection has higher survival rates. Medically operable patients treated with SBRT have better survival than non-operable patients. More standardized methods for data collection and data reporting are necessary in order to allow comparisons across published studies on wedge and SBRT treatment.

We would like to thank Dr. Betsy Becker for her help with the calculation of credibility limits in the forest plots.

Ethical Statement: The authors have complied with all ethical standards in publishing.