Lung cancer treatment and survival depend on the patient’s clinical stage. Among all of the different stages, patients with stage IIIA-N2 disease face the most controversial treatment path because stage IIIA-N2 disease is a heterogeneous disease process with some patients presenting with microscopic tumors in the mediastinal lymph node while other patients have bulky multistation disease. Even though patients with this stage have different amounts of disease burden in the mediastinum, we provide a uniform treatment to this group of patients. Roth et al. and Roswell et al. have shown that patients who underwent induction chemotherapy followed by surgery had significantly improved survival compared to patients who had surgery alone. These studies from the 1990s have shaped our standard treatment plan for patients with stage IIIA-N2 disease (1,2). Roth et al. (3) and Rosell et al. (4) have shown significant improved survival with induction chemotherapy for stage IIIA disease compared to surgery alone. Other studies have shown the benefits of induction therapy but they all include a mixed group of patients spanning from stage IB to IIIA, thus the overall survival in this group of patients does not apply to our current study (5-8). Patients with concurrent chemoradiation therapy followed by surgery for stage IIIA showed a median survival rate of 13 months in one study (9) and 50.4 months in another (10).

All of these studies showed a clear benefit in providing induction therapy for patients with N2 disease. However, all of these randomized patients had N2 disease that was detected on computed tomography (CT) >1 cm and was confirmed on mediastinoscopy. None of these patients underwent positron emission tomography-computed tomography (PET-CT). Since these studies have been performed, we have improved our ability to stage the mediastinum with PET-CT, which has a higher sensitivity and specificity compared to CT scans alone. In addition to mediastinoscopy, we have endobronchial ultrasound (EBUS) to help obtain confirmatory tissue diagnosis.

In the era of improved mediastinal staging modalities, we still have patients who undergo initial surgery and are found to have N2 disease at the final pathology (11). This group of patients have what we call “occult N2” disease because they either have no PET or CT criteria for mediastinal metastasis or have PET or CT positive N2 lymph nodes with either EBUS and/or mediastinoscopy that did not yield a diagnosis of metastatic disease. The rate of occult N2 disease is 4–6% for T1 tumors and 9–10% for T2 tumors with higher rates in patients with larger T size, positive N1 and central tumors (12,13). In this study, we want to determine the clinicopathologic characteristics and survival for patients with occult N2 disease, and determine if any factors contribute to their survival.

The University of Texas MD Anderson Cancer Center (MDACC) Institutional Review Board approved this retrospective study (PA15-0619). We identified patients who underwent pulmonary resection (lobectomy, bi-lobectomy and pneumonectomy) for primary lung cancer at MD Anderson Cancer Center (MDACC) between 2000 and 2013. We then determined those patients who had pathologic stage IIIA-N2 disease who underwent surgery as an initial therapy according to the Seventh Edition of American Joint Committee on Cancer (AJCC) staging guidelines. Our inclusion criteria for the study was that the patient had to have preoperative 2-deoxy-2-(18F) fluoro-D-glucose positron emission tomography (FDG-PET) or FDG-PET/CT and CT scan for non-invasive staging of the mediastinum within 60 days of the time of surgery. We excluded those patients with carcinoid tumors. The standard protocol for invasive mediastinal staging was those patients who had any CT or FDG-PET evidence, or large tumor or central tumor underwent mediastinal staging. If the EBUS was negative but still high clinical suspicion, patient underwent mediastinoscopy.

The prospective database and the patient’s medical records were used to collect demographic information, comorbidity, type of operation, pathologic lung stage, histologic evaluation, adjuvant chemotherapy, adjuvant radiation therapy, follow-up and mortality data. The CT or report was reviewed to determine whether the mediastinal lymph node met the CT criteria for lymphadenopathy (>1 cm) and PET-CT or its report was reviewed for standardized uptake value (SUV) of the mediastinal lymph node and primary tumor.

We determined the clinicopathologic and radiological characteristics of patients who met the inclusion and exclusion criteria. We determined the mean and standard deviation for continuous variables and determined the percentage for categorical variables. The overall survival curve was obtained using the Kaplan-Meier method. We then performed univariable Cox regression analysis for overall survival rates, and those covariates with P value of less than 0.25 were entered into a multivariable analysis. Stepwise Wald backward elimination was used in multivariable Cox regression analysis to identify variables predictive of overall survival in the group. The statistical significance was defined as a p value of less than 0.05. We used SPSS 21 software (IBM Corp, Armonk, NY, USA) to perform the statistical analysis.

There were 2,817 patients who underwent lobectomy, bi-lobectomy or pneumonectomy for primary lung cancer between 2000 and 2013. There were 101 patients (3.6%) who met the inclusion and exclusion criteria. The average age of the group was 65 years old with 53 (53%) females (Table 1). There were 36 patients who had FDG-PET and 65 patients who had FDG-PET/CT. The CT of the chest showed 30 patients (30%) with mediastinal lymphadenopathy (>1 cm) and 13 (13%) with multistation disease. The PET-CT showed 24 (24%) with N2 positive uptake. Among 101 patients, 43 (43%) patients had either EBUS or mediastinoscopy for invasive staging that showed negative metastatic disease to the mediastinal lymph node. Eighty-four patients underwent surgery with lobectomy (83%), 7 with bilobectomy (7%), and 10 with pneumonectomy (10%). The most common pathology was adenocarcinoma with 73 patients (72%) and the second most common was squamous cell carcinoma with 22 patients (22%). The final pathology showed 72 patients (71%) with positive lymph nodes in station 2, 4 or 7 and rest of the patients with positive lymph nodes in station 5, 6 or 9. We had data for 98 patients for completion of adjuvant chemotherapy and 97 patients for completion of adjuvant radiation therapy. Among these patients, 86% and 87% completed the adjuvant therapy respectively.

The median survival for the entire group was 49 months and the 5-year survival rate were 48% and 10-year survival rate was 24% (Figure 1). For patients with CT and PET negative preoperative imaging, the overall survival rate was 54% with a median survival of 74 months (Figure 2). Univariate analysis showed that age, gender, chronic obstructive pulmonary disease (COPD), coronary artery disease (CAD), obstructive sleep apnea, peripheral vascular disease, steroid use, diabetes mellitus (DM), renal insufficiency, preoperative imaging status, and mediastinal staging met the criteria to be entered into the multivariate analysis. The multivariate analysis showed that the patient’s age and peripheral vascular disease were factors that were associated with worse survival in this group (Table 2). 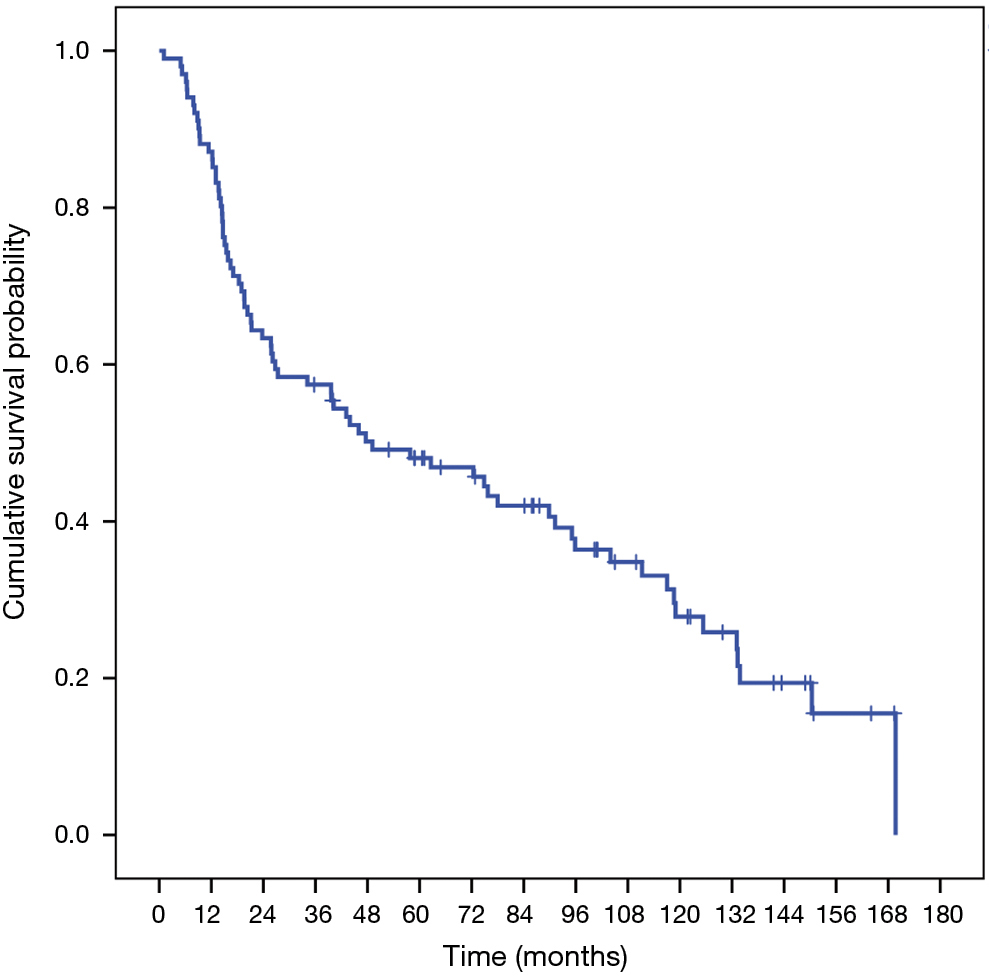 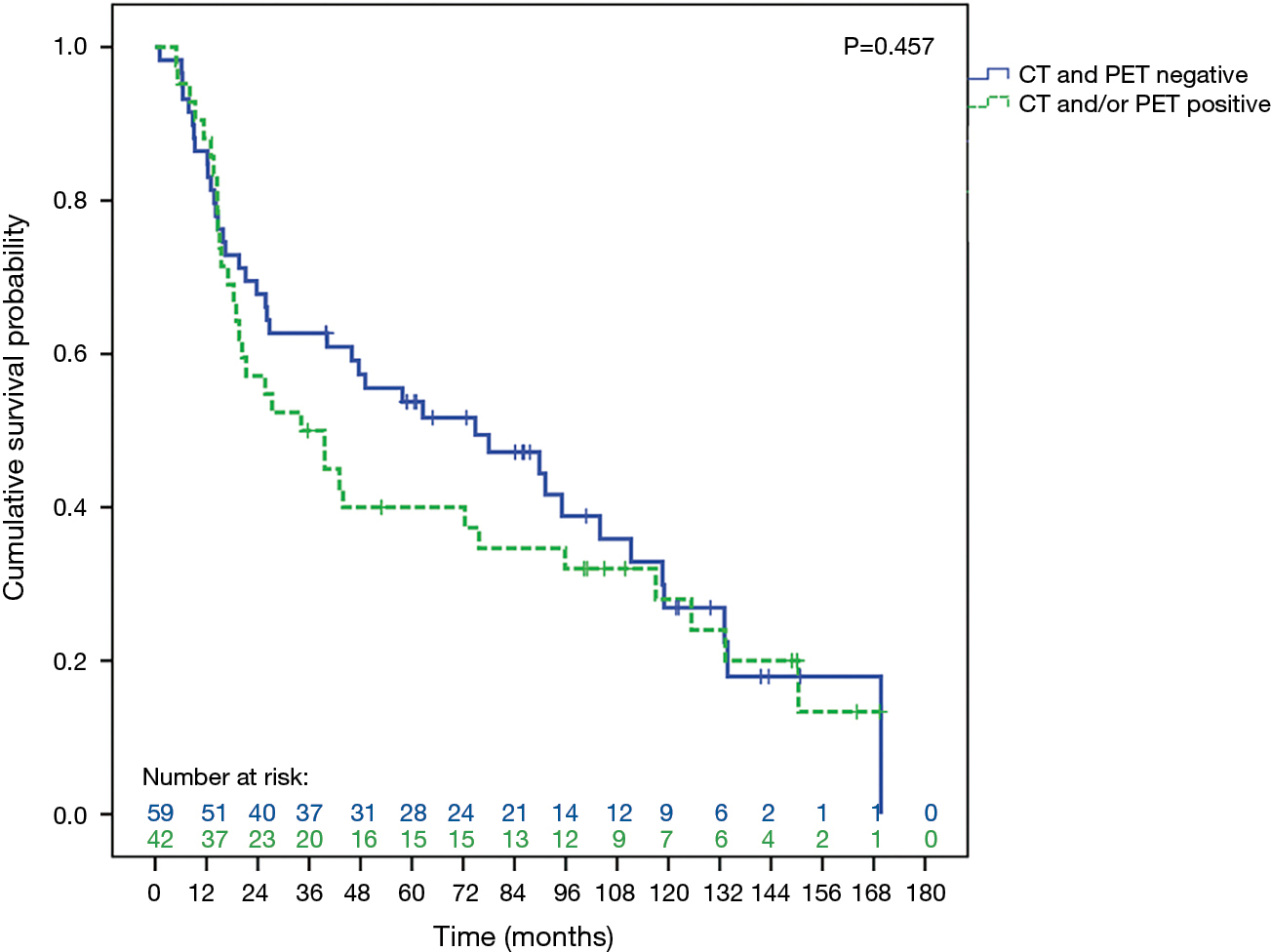 In the area of improved mediastinal staging, it is unknown if patients with N2 disease not evident on PET and CT of chest with biopsy proven N2 disease will benefit from induction chemotherapy followed by surgery and radiation therapy compared to surgery first in the multimodality treatment plan. Since most of the patients that were studied in the randomized controlled trial had CT positive lymph nodes, the benefit is not clear in this subset. Although the difference was not statistically significantly from other groups, in our study, the median survival for PET and CT negative N2 disease group of patients was 72 months. Our group may have had less mediastinal lymph node burden compared to other groups of patients since despite invasive mediastinal staging, they were found not to have N2 disease prior to surgery. Most of the patients had small peripheral lung cancer without CT or FDG-PET evidence of mediastinal disease, thus they did not undergo mediastinal staging. Those patients who had any CT or FDG-PET evidence or large tumor or central tumor underwent mediastinal staging. If the EBUS was negative but still high clinical suspicion, patient underwent mediastinoscopy. Despite this protocol this select groups of patients did not have N2 disease prior to surgery. However, this protocol has led to only 3.6% of patients having occult N2 disease after surgical resection during this time period. Patients with PET N2 positive lymph nodes did not have worse survival in this study nor were patients who had >1 cm lymph node on a CT scan of the chest. The location of the N2 disease also did not predicts worse survival.

The overall 5-year survival for patients with stage IIIA-N2 disease in the seventh edition of AJCC staging for NSCLC has been 24% (19). Our study shows that our group of patients who were thought to have clinical stage N0 or N1 disease at the time of surgery and found to have pathologic N2 disease after surgery had excellent overall 5-year survival of 48%. This is due to heterogeneity of N2 disease where some patients have significant tumor burden in the mediastinal lymph nodes which may have worse overall survival compared to patients with occult disease in the mediastinal lymph nodes (20).

Our retrospective study has several limitations. One limitation is FDG-PET was performed from 2000 to 2004 and FDG-PET/CT was used from 2004 to 2011. We did not have the original scan for CT and PET/CT for all of the patients and we relied on reports for those patients where we did not have imaging information.

Further studies are needed to understand the best way to treat patients with PET and CT negative, occult IIIA-N2 disease. One question is to determine whether patients with CT and PET negative mediastinum with positive N2 on EBUS to undergo surgery first strategy in multimodality therapy may have a good overall survival rate compared to induction chemotherapy followed by surgery and radiation therapy. A randomized control trial for this group of patients may answer this important question.

In summary, the patients with clinical N0 or N1 disease who had initial surgery and found to have pathologic N2 disease has an excellent five-year survival rate. This may be due to heterogeneity of N2 disease and the improved survival for patients with less metastatic disease.

We thank Anna Saikin for language editing of the manuscript.

Conflicts of Interest: MP Kim has consulted for Intuitive Surgical, Olympus, Boston Scientific and Medtronics. The other authors have no conflicts of interest to declare.