Sleeve resection allows preservation of lung tissue while achieving an oncological resection. Although initially it was intended as a parenchyma-sparing procedure for patients who could not tolerate a pneumonectomy, sleeve lobectomy is now the standard procedure for all anatomically suitable tumors (1). Sleeve procedures result in improved survival, quality of life, reduced loss of lung function, and improved mortality when compared with pneumonectomy (2).

Numerous studies, although mostly retrospective, have shown several advantages of thoracoscopic surgery for major lung resection over thoracotomy (3-6). Recently, a randomized controlled study reported a reduction in postoperative pain and better quality of life with a minimally invasive approach (7). Sleeve lobectomy has traditionally been considered a contraindication to thoracoscopic surgery, however a growing number of series have now reported on the feasibility of video-assisted thoracoscopic surgery (VATS) in sleeve resections (8-13). Thus, the skills and experience derived from major VATS procedures are being applied to the performance of a sleeve lobectomy with a minimally invasive approach.

Despite the encouraging results, thoracoscopic sleeve resections remain a challenging operation reserved for experienced surgeons. Likely, the steep learning curve associated with this procedure has contributed to the small number of cases reported in the literature. Here we report our outcomes with sleeve resections via a minimally invasive approach.

We performed a retrospective review of a prospectively maintained database of patients that underwent thoracoscopic sleeve resections at MedStar Georgetown University Hospital from 01/01/2010 to 11/01/2017. Indications, operative details, pathology, postoperative complications, and long-term follow-up were reviewed. This study was approved by the MedStar Georgetown University Hospital Institutional Review Board (IRB# 2012-064).

We incorporated two different approaches for our thoracoscopic sleeve resections: VATS and more recently robotic approaches. For the VATS technique, we used the standard 3-port approach and a 5 mm 30-degree camera (Figure 1). Two 5 mm ports, one at the 7th intercostal space, anterior axillary line, and the 6th intercostal space, posterior axillary line. The utility port was 3.5 to 5 cm depending on the size of the patient and the body habitus. The position of the utility port was determined after placing the camera. The utility port was placed directly above the pathology to be addressed. Depending on the viewpoint required, the camera was moved between the anterior and posterior ports. For the robotic approach, we utilized a four-port technique with the da Vinci Xi robotic system (Intuitive Surgical, Sunnyvale, CA, USA; Figure 2). A thoracic grasper was used in arm 1, a hook cautery in arm 2, a 30-degree camera in arm 3 and the Maryland forceps in arm 4. 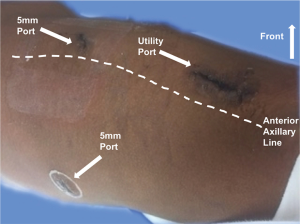 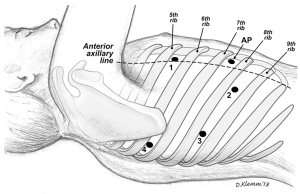 The intercostal muscles were divided in the utility port with camera guidance to facilitate the approach. If no major contraindications were encountered upon initial evaluation, this was followed by mobilization of the lobe, with dissection of the hilar pulmonary lobar branches. Dissection of the airway was completed after division of other hilar structures. Lymphadenectomy was performed typically during mobilization of the airway. Frozen sections of the bronchial margins were obtained before moving on to the bronchoplasty. The airway was then approximated with an end-to-end anastomosis technique using 3-0 or 4-0 PDS (Ethicon, Somerville, NJ, USA), depending on the size of the anastomosis (Figure 3). The vascular anastomosis, when required, was performed following the airway anastomosis. Initially in the series, we harvested a thymic flap or intercostal muscle flap and wrapped it around the airway anastomosis. However, given the added complexity of this step and the lack of true evidence supporting the vascularized pedicle, during the most recent two robotic sleeve resections we did not use a flap (14). At the end of the procedure, intercostal blocks were performed. A single chest tube was left in place at the completion for the majority of procedures. Routine intraoperative bronchoscopy was performed at the completion of each case to evaluate the anastomosis and evacuate any secretions. 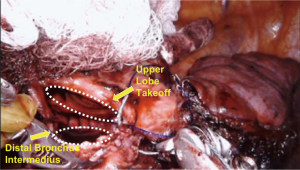 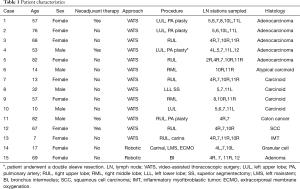 Length of stay ranged from 3 to 10 days (median, 5 days; Table 2). There were no anastomotic or vascular complications, either short- or long-term. There were no operative mortalities. Nine patients did not have postoperative complications and had uneventful postoperative courses. Six patients had early postoperative complications listed in Table 2. Four (67%) of the 6 complications were classified as Clavien-Dindo grade I or II (Table 2). One patient was re-admitted to the hospital shortly after being discharged and was found to have a pericardial effusion that required drain placement (Clavien-Dindo grade IIIa). Her symptoms subsequently resolved and she was discharged home. A second patient, aged 7, had a persistent air leak with fever after a VATS right upper lobe and carinal sleeve resection. She underwent a VATS exploration to evaluate the anastomosis which was intact (Clavien-Dindo grade IIIb). She was discharged on postoperative day 10 without further event and is now 13 years old without clinical evidence of stricture. Median follow-up was 4.2 years (range 2 to 98 months) and was complete in all patients. During the follow-up period, two patients died from metastatic non-small cell lung cancer. At last follow-up, one patient was alive with metastatic non-small cell lung cancer and 12 patients had no evidence of disease and had no symptoms related to their operation. 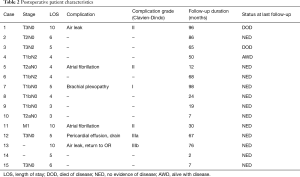 The surgical principles of a minimally invasive approach to airway sleeve resection are the same as for open surgery. It is critical that the anastomosis of the airway be performed free of tension. Some authors recommend interrupted sutures to allow better size matching, less anastomotic site ischemia and prevent the loosening and entanglement of the sutures (8). Given the technical challenges of the utilization of interrupted sutures through a small utility port, a running suture greatly simplifies the technical challenges of the anastomosis. This was our preferred technique prior to incorporation of a minimally invasive technique. The advantage of continuous suturing over interrupted suturing for the bronchial anastomosis is the avoidance of multiple sutures exiting the utility port. This can interfere with visualization and performance of the anastomosis. This is of particular importance in minimally invasive thoracic surgery, in which surgeons have a limited field of view and narrow working space (17). In addition, we use an absorbable suture. We have not observed any anastomotic strictures, in particular in children who underwent sleeve anastomosis that are now several years older. Finally, although we routinely buttressed the anastomosis using an intercostal muscle flap, pericardial fat pad or thymic fat pad for our VATS sleeve resections, we did not in the robotic procedures. Given the limitations of the robotic arm positioning and direction, harvesting additional flaps creates new challenges. During the robotic sleeve resections, as we did not observe any intraoperative technical complications related to the performance of the anastomosis, we have adopted the practice of others who do not deem this as a necessary step.

There are few cases describing double sleeve (combined vascular and bronchial) resections with a minimally invasive approach (11,18-21). In a retrospective multi-center study with 13 VATS double sleeve resections for NSCLC, Huang et al. had no conversions to thoracotomy. The median operative time was 263 min and the median postoperative hospital stay was 10 days (9). Here we report a case of a patient with an adenocarcinoma that underwent neoadjuvant chemotherapy and subsequently we performed a bronchovascular sleeve by VATS. He recovered well postoperatively and went home on day 5. Double sleeve lobectomy provides an alternative to pneumonectomy in patients presenting with centrally located tumors that involve both the pulmonary artery and bronchus. In patients receiving neoadjuvant treatment, bronchovascular reconstruction is safe and allows for preservation of lung function and rapid recovery (22).

Although this is a small retrospective series, the perioperative outcomes, complications, and length of hospital stay were comparable to that reported by others (8,23,24). Mahtabifard et al. reported four of 13 (31%) patients undergoing VATS sleeve lobectomy experienced postoperative complications, including atrial fibrillation, anastomotic stricture, reintubation, and bronchial tear requiring repair (8). Wang et al. have described the successful use of VATS sleeve lobectomy with only one patient in their cohort of 15 (6.7%) experiencing minor complications (25). Such variability likely depends on the characteristics of studied populations, and the small numbers in these series. Zhou et al. retrospectively reviewed their outcomes with VATS versus thoracotomy and found similar complication rates and survival rates despite the surgical approach. The authors did note a longer operative time but a shorter length of hospital stay following VATS sleeve lobectomy as compared to an open approach (26).

Sleeve resection with a minimally invasive approach can be considered for the management of central airway disease. This appears feasible in select patients, even when arterioplasty or carinal resection is performed. Outcomes in this small series appear comparable to the open approach. It remains unclear if anastomotic healing is improved with a buttress. The magnified view of the anastomosis with the camera during thoracoscopic reconstruction may lead to decreased operative anastomotic complications, however longer follow-up is needed.

Ethical Statement: This study was approved by the MedStar Georgetown University Hospital Institutional Review Board (IRB# 2012-064).