Cardiac embolism is a common cause of ischemic stroke. Atrial fibrillation (AF) can be detected in nearly 25% of all patients with stroke by sequentially combining different electrocardiographic methods (1). Advanced IAB (aIAB) has been described to predict occurrence of new onset and recurrent AF (2). We describe a case of a patient in whom detection of atypical aIAB motivated extended cardiac monitoring resulting in the diagnosis of paroxysmal AF and a subsequent decision on full oral anticoagulation strategy.

During a vacation abroad, a 79-year-old woman experienced sudden right-sided hemiplegia. She was admitted to the nearest hospital and thrombolysis was started. A magnetic resonance angiography showed signs of ischemic stroke within the perfusion territory of the right middle meningeal artery. An echocardiogram was performed, which showed no obvious cardiac embolic source. Subsequently, a duplex carotid scan and a 48-hour Holter monitoring were performed. The carotid scan showed only mild abnormalities. The 48-hour Holter monitoring showed several runs of short ectopic atrial tachycardia, but no AF or atrial flutter.

Resting ECG (Figure 1) showed sinus arrythmia at 63 beats per minute. QRS, ST and T waves were unremarkable. P waves showed increased duration (>120 ms). The polarity of the P wave in lead III and aVF was biphasic (positive-negative) consistent with aIAB (3,4). In lead II, the P wave showed a triphasic pattern (positive-negative-positive), which just recently was defined as atypical aIAB (3). Based on this finding, extended ambulatory ECG monitoring using an “R test” was performed. On the third day of recording, several episodes of AF were recorded, the longest episode lasting 7 minutes (Figure 2). Full anticoagulation with apixaban was commenced.

Advanced IAB in combination with supraventricular arrythmias is known as Bayes’ syndrome (5). IAB has been described to predict occurrence of new onset and recurrent AF. A disturbed interatrial conduction, as in IAB, results in varying/shorter refractory periods and slower conduction velocities within the atrial myocardium—a potential substrate for the development of atrial arrythmias (5-7).

In a recent meta-analysis (>18,000 patients) aIAB, but not partial IAB, was shown to be a significant predictor of both new onset and recurrent AF (2). Anti-arrhythmic treatment of patients with aIAB has shown to reduce AF occurrence, however; no randomized data are available at the present time (6). Furthermore, IAB is highly prevalent in patients with embolic stroke (5,6,8,9). In patients with aIAB, due to a block of impulse propagation between the atria, depolarization follows a caudo-cranial route, first towards the AV node and then in a retrograde direction through the left atrium (3) (Figure 3), resulting in poor left atrial electro-mechanical function (6). A poorly functioning left atrium predisposes to clot formation (6). It has been suggested that aIAB should be included in the risk assessment of patients with cryptogenic stroke even if no AF has been recorded (5). In this case, presence of aIAB warranted extended ambulatory ECG recording, which showed AF and anti-coagulation treatment could be commenced. 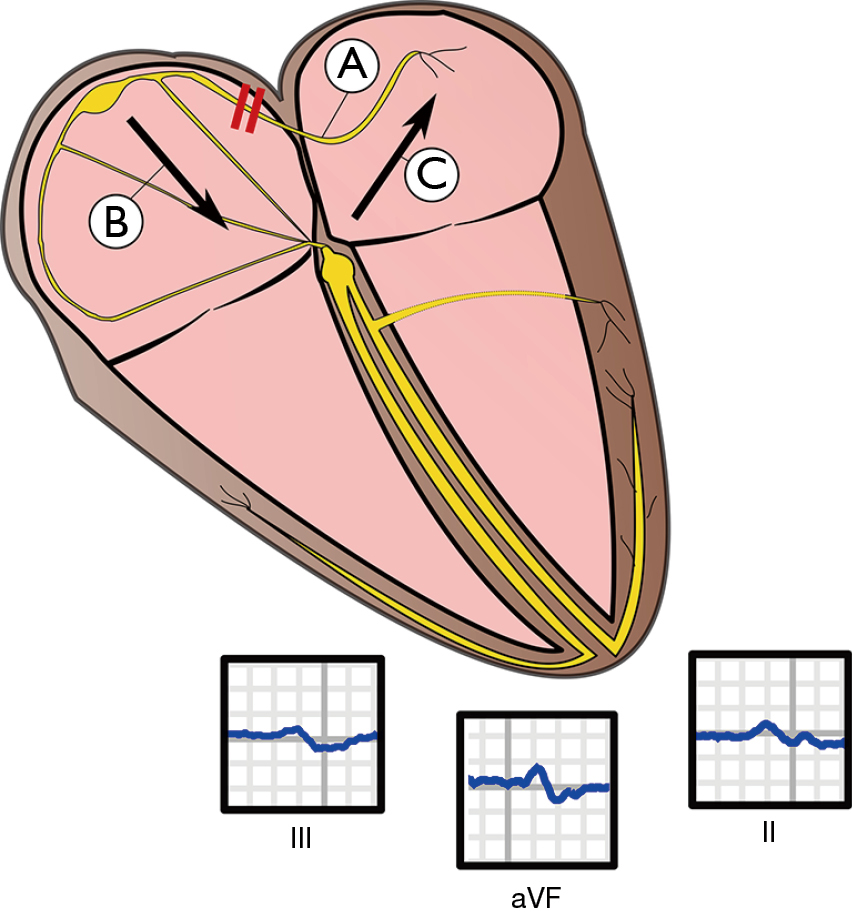 Advanced IAB is a strong predictor of paroxysmal AF and can be used to guide management of patients with stroke in search of AF, when selecting patients for anticoagulation therapy.