Pain control after surgery is vital in preventing post-operative complications. Patients with adequate pain control are better able to mobilize, take deep breaths, cough, and clear secretions. These maneuvers are thought to prevent complications such as deep vein thrombosis, atelectasis, and pneumonia. In addition, management of acute pain after surgery is critical in preventing development of chronic postsurgical pain (1). Historically, thoracic epidural analgesia has been the gold standard for pain control after thoracotomy, but it is commonly associated with undesirable side effects including hypotension and urinary retention. For minimally-invasive video-assisted thoracoscopic surgery (VATS), intercostal nerve blocks can be used as an alternative to epidurals for pain control (1). Although initial pain control is adequate with this approach, it often requires supplementation with additional therapies due to the short half-life of local anesthetics.

The primary outcome of this study was LOS in thoracic surgery patients undergoing VATS wedge resection, VATS lobectomy, or minimally-invasive esophagectomy (MIE), compared between patients who received liposomal bupivacaine and patients who received bupivacaine with epinephrine (1:100,000). Intercostal nerve block was performed at the end of each operation prior to chest tube placement under direct VATS visualization. For the liposomal bupivacaine group, 266 mg (20 mL drug diluted with 0.9% normal saline to total volume of 30 mL) was injected in equal amounts in successive rib spaces from one above and one below the outermost port site rib spaces. For the bupivacaine with epinephrine group, an equivalent dose of 0.25% bupivacaine with epinephrine (1:100,000) was used with the identical technique. Secondary outcomes included 24-hour postoperative pain scores, opioid utilization, and time to ambulation. Additionally, 30-day emergency department (ED) visits and hospital readmissions were recorded.

Patients who received VATS were identified using Epic HealthConnect, the Kaiser Permanente electronic medical record. Eligible patients were at least 18 years of age and underwent one of three common VATS procedures (wedge resection, lobectomy, or MIE) performed by the same three Kaiser Permanente Oakland Medical Center board-certified thoracic surgeons from October 2013 to October 2015. Included patients received either liposomal bupivacaine or bupivacaine with epinephrine as an intercostal nerve block. The bupivacaine with epinephrine group are included as historical controls, as the study period included a transition to liposomal bupivacaine as a consistent practice at our institution. This transition represented a complete adoption of liposomal bupivacaine, therefore there was no temporal overlap in patient groups, minimizing possibility for selection bias. Patients were excluded if they underwent a different type of surgery, had a different operating surgeon, or required an admission to the intensive care unit (ICU) after surgery (as the majority of our thoracic surgery patients go to the floor postoperatively, ICU admission was thought to indicate more serious issues that would preclude relevant study of the outcome variables).

All data points collected for analysis were extracted from HealthConnect. LOS was determined by subtracting the date and time of hospital discharge from the date and time of hospital admission. The electronic document flowsheet was used to collect 24-hour postsurgical pain scores and ambulation data for each patient. Time to ambulation was defined by time from case end to time of bedside nurse documentation of first ambulation, which is routinely documented in the medical record. The electronic medication administration record was used to account for any opioid medications administered within 24 hours after surgery, and the use of opioids was quantified as intravenous morphine equivalents (mg). All ED visit or hospital readmissions within 30 days after postsurgical discharge were examined.

A power analysis was performed based on an estimated mean LOS of 2.75±1.58 days for standard release bupivacaine and 2.1±1.25 days for liposomal bupivacaine group. To detect an absolute difference of 1 day in LOS at 80% power and alpha of 0.05 we would need a total of 64 patients. Data are reported as means and standard deviations, medians and interquartile ranges (IQR), or percentages. Non-parametric Wilcoxon Rank-sum tests or t-tests were used for analysis of continuous variables; chi-squared tests or Fisher Exact tests were used for categorical variables. Data management and analyses were performed using Statistical Analysis Systems (SAS) 9.4 (Cary, NC). A P value of <0.05 was considered statistically significant. 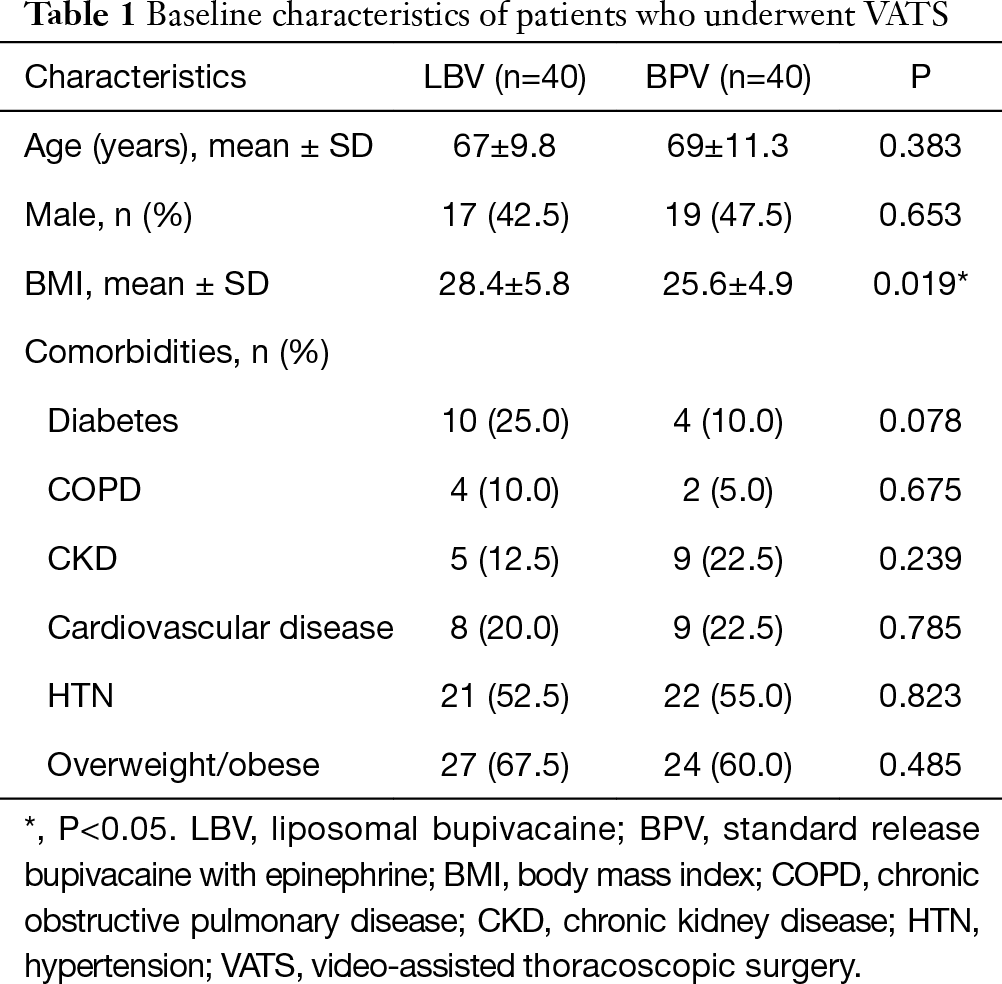 The average length of surgery, for all surgeries combined, was 3.02±1.21 hours for patients in the liposomal bupivacaine group and 3.20±1.17 hours for patients in the who received standard-release bupivacaine (P=0.296). The numbers of each type of VATS surgery were similar between the two groups. There was no significant difference in length of surgery between the two groups. A complete summary of surgical characteristics is detailed in Table 2. 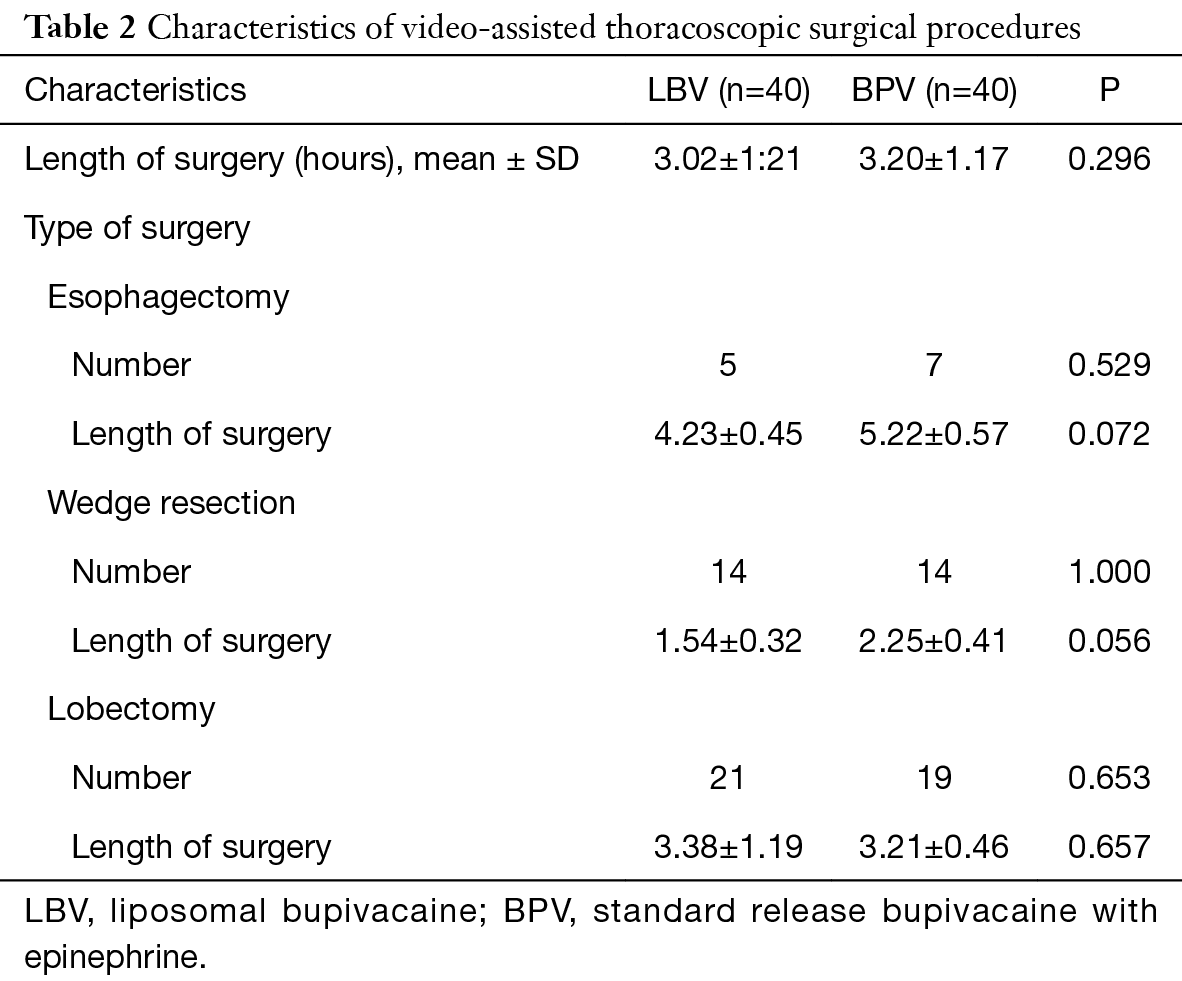 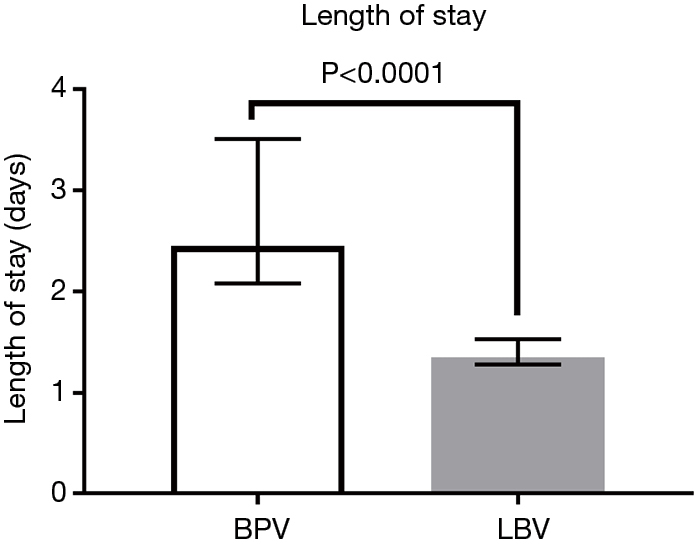 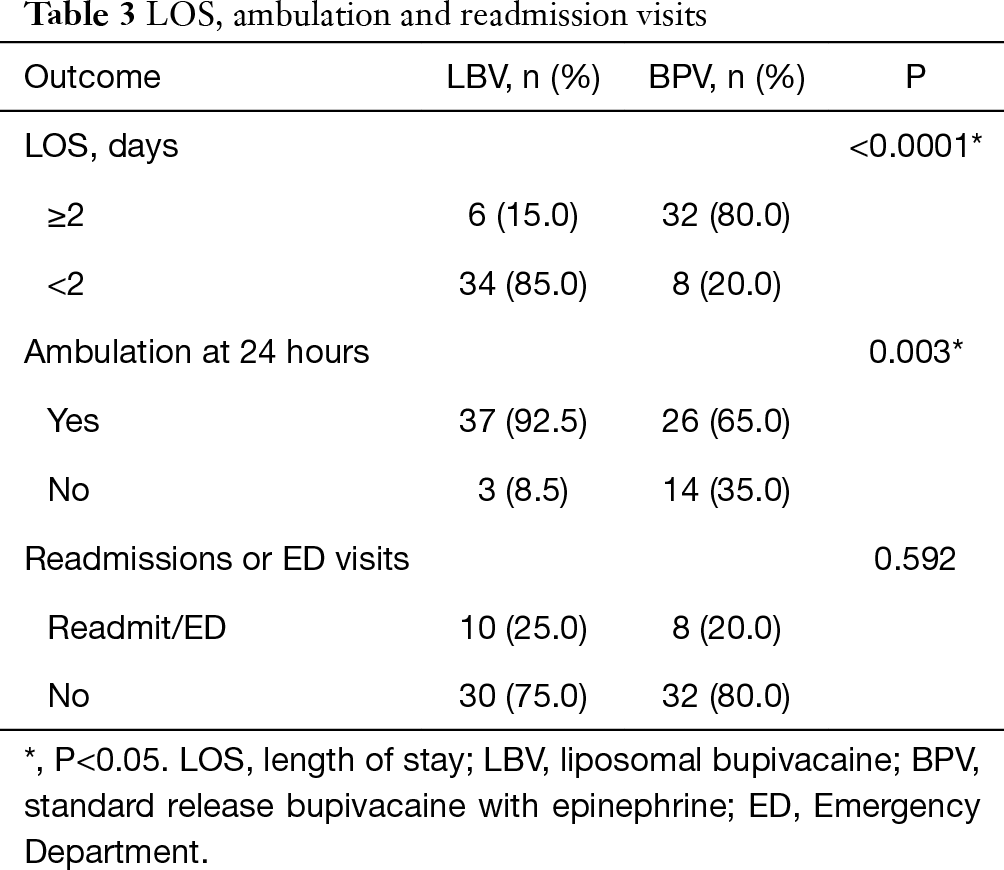 Average 24-hour postoperative pain score was 3.4±1.8 for the liposomal bupivacaine group and 2.3±1.2 for the standard-release group (P=0.002) (Figure 2). Despite this statistically significant finding, the experimental group did not use more opioid medication and returned to ambulation sooner. There was no significant difference in 24-hour postoperative intravenous morphine equivalent usage between the two groups (29.8±21.0 vs. 31.9±20.9 mg, P=0.664). However, at 24-hours postoperatively, 93% (37/40) of patients receiving liposomal bupivacaine were ambulatory, compared to only 65% (26/40) of patients in the control group (P=0.003) (Figure 3). Statistical significance was maintained for each group with regards to LOS in the subgroup analysis. Only lobectomy patients had a significant difference in the proportion of patients ambulating at 24-hours in the liposomal bupivacaine group (95.2% vs. 52.6%, P=0.003). There was no significant difference between the number of ED visits or hospital readmission rates between the two groups (P=0.592) (Table 3). 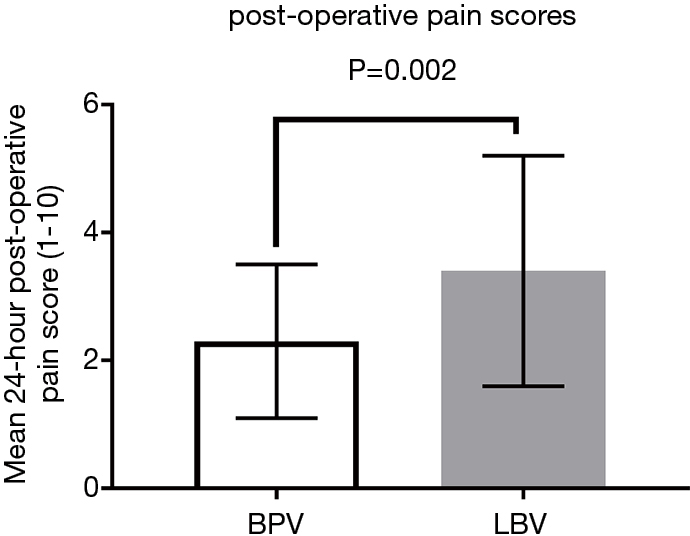 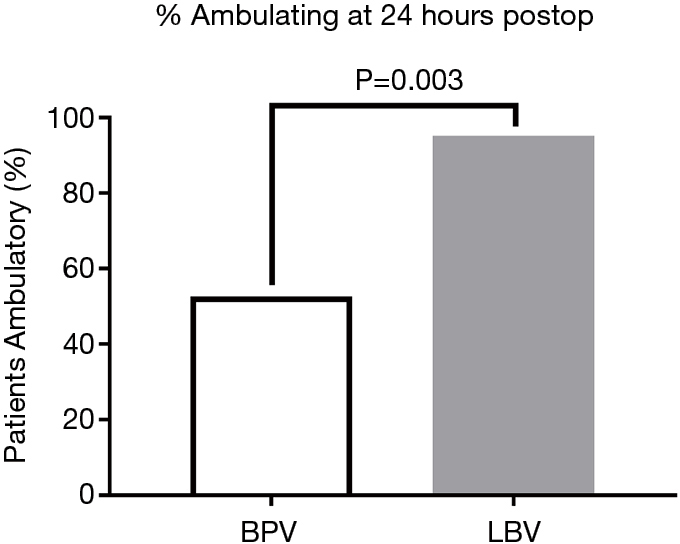 Interestingly, in our study, the average pain scores were slightly higher for patients who received liposomal bupivacaine compared to controls, and the difference was statistically significant. However, the clinical significance of this difference is unclear. Overall pain scores were low for both groups and the small absolute difference in pain scores did not translate to a difference in total intravenous morphine equivalents between the two groups. One possible explanation of this equivalent opioid use is that there are temporal differences in opioid use that are not detected by our study. It is possible that those in the standard release group would use less opioids initially when the drug is active, requiring more as the effect dissipates. One would then expect the opposite in the liposomal bupivacaine group as the drug reaches peak effect. Our results contrast with a recent study that found decreased morphine equivalents at 24 hours in patients undergoing VATS wedge resections, but no concomitant decrease in hospital stay (11). Those findings are not wholly in contradiction to our study, in which the contribution of decreased LOS from the wedge resection patients was minimal because the majority were discharged on postoperative day one. As the selected study populations clearly have distinct differences in the complexity of surgical procedure and recovery, we performed a subgroup analysis to ensure that each group maintained statistical significance for LOS as shown in Table 4. Our findings were more consistent with another study, which found that the LOS was decreased by one day in patients who received liposomal bupivacaine compared to those who received an epidural, but did not find a significant difference in average pain scores and opioid consumption (9). A third study found that the average LOS for post-thoracotomy patients was 1.9 days less for those receiving liposomal bupivacaine than for those receiving epidural analgesia; as in our study, there was no difference in supplemental opioid use, but the mean 24-hour pain score was significantly lower for patients who received liposomal bupivacaine (8).

Significantly more of our patients who received liposomal bupivacaine could ambulate within 24-hours after surgery compared to those who received standard-release bupivacaine. This factor may be contributing to the shorter LOS, as early ambulation after surgery has been shown to result in improved patient outcomes and decreased postsurgical complications (12). In contrast, it may also contribute to the increased subjective pain scores found in our analysis. Given that the patients receiving liposomal bupivacaine ambulated earlier, it is possible that they experienced increased discomfort due to earlier mobilization. Early postoperative mobilization not only prevents complications such as deep venous thromboembolism and/or pulmonary embolism, but for thoracic surgery patients specifically, improves pulmonary function and promotes lung expansion (13,14). Interestingly, on subgroup analysis (Table 4), this effect on return to ambulation appeared to be primarily from the lobectomy group which maintained statistical significance. We believe this is due to the differences in surgical complexity between groups, specifically the fact that wedge resections are often discharged prior to 24 hours and esophagectomy patients have additional abdominal wounds that may contribute to decreased ambulation.

This single-center, retrospective study was limited to the data available and documented in the electronic medical record and certainly the use of historical controls carries a risk of temporal and selection bias. The approximate duration of action of liposomal bupivacaine is 96 hours; however, because patients had an average LOS of 1.35–2.45 days, it was not possible to collect and compare pain scores and opioid use beyond 24 hours after surgery. Due to the extended duration of liposomal bupivacaine, there could potentially be a decrease in pain scores and opioid use beyond 24 hours. Pain scores are highly subjective and although they were documented during each nursing shift, the specific number of pain scores documented per patient varied.

Special thanks to Mary Anne Armstrong and Julia Wei in the Kaiser Permanente Division of Research for statistical analysis, as well Pamela Derish in the UCSF Department of Surgery for editorial assistance.