Endobronchial cryotherapy was initially explored as a means to treat complications of prolonged endotracheal intubation and tracheostomy by causing tissue destruction due to repeated freeze thaw cycles (1). The cryosurgical probe was passed through the rigid bronchoscope and the lesions were frozen to −80 °C to relieve the obstruction. Cryotherapy was also used through rigid bronchoscopy for palliation of benign and malignant central airway stenosis (2). Subsequently, a flexible cryoprobe was developed which could be used through a flexible bronchoscope to treat malignant central airway obstructions and to obtain endobronchial biopsies using cryoadhesion (3). Cryotherapy has also been described for treatment of low-grade airway malignancies, and foreign body removal including blood clots (4). Recently, the role of cryotherapy has expanded to obtain transbronchial lung cryobiopsies (TBLC) of lung masses and diffuse parenchymal lung disease (5). Although larger and crush artifact free tissue can be obtained with TBLC, there is concern of a higher risk for bleeding (6). Radial probe endobronchial ultrasound (RP-EBUS) may be helpful by avoiding sampling of areas with large vessels to reduce the risk of bleeding. In this review article, we will focus on the available data related to the combined use of RP-EBUS and TBLC. We will focus on the technical details, yield and complications of such procedure. We searched the Cochrane Library and MEDLINE to provide the most comprehensive review of RP-EBUS guided cryotherapy. We used the following search terms: bronchoscopy, cryotherapy, endobronchial ultrasound (EBUS), interstitial lung disease (ILD) and lung nodule. We focused on articles that described the use of RP-EBUS and cryotherapy for diagnosis of lung nodules and ILD.

Berim et al. (7) used a radial ultrasound probe (Olympus UMS20-17S) and passed it under ﬂuoroscopic guidance into the subsegmental branches of the target lobe and positioned it 1 to 2 cm away from the pleural surface for diagnosis of diffuse parenchymal abnormalities. They proceeded to confirm the absence of ultrasonographically identiﬁable vasculature. The location was marked on the ﬂuoroscopy screen and ultrasound probe was slowly withdrawn until pulmonary vasculature was seen, at which point a second mark was placed on the ﬂuoroscopy screen. If the distance between the 2 marks was <1 cm as measured during ultrasound probe retraction, an alternative airway was selected, and process was repeated. Once the target area for biopsy was established, a 2.4-mm cryoprobe (ERBE 20416-033, Marietta, Georgia USA) was passed through the bronchoscope into the target area. A 3-second cryoprobe activation was performed and the bronchoscope and cryoprobe were then removed en bloc. The specimen was placed in ﬁxative after passive thawing. Up to 3 biopsies were obtained in different locations in the same lobe. The use of endobronchial blocker was at the discretion of the bronchoscopist. The authors encountered no severe bleeding in RP-EBUS guided TBLC group (six out of ten total patients) by avoiding major vessels using the technique above. Cryobiopsy was performed without RP-EBUS in four of the ten patients with ILD and one patient had a large hemorrhage (300 mL) requiring selective intubation.

Herath et al. (8) described the RP-EBUS TBLC technique for peripheral pulmonary masses. The subsegmental locations of the mass were identified prior to the procedure and airways close to the lesion were marked as the point of placement of the radial probe within the lesion. They trimmed the RP-EBUS guide sheath (GS) to better reach the lesion through the 1,050 mm long, 1.9 mm ﬂexible cryobiopsy probe. Flexible bronchoscopy was performed with a 2.8-mm working-channel ﬂexible bronchoscope. The radial probe (mini-USS probe 20 MHz, UM-BS20-20R-Olympus, Tokyo, Japan), within the 2.6 mm GS, was extended into the lung periphery through the bronchoscope. After identification of the lung mass through the ultrasound, the radial probe was retracted leaving the GS in place without the use of fluoroscopy. An endobronchial blocker (Arndt size 7) placed outside the endotracheal tube was placed proximally to the chosen segment of the lung at the start of the procedure. The blocker was inflated and was secured at the angle of the mouth of the patient with tape and held firmly by an assistant to avoid dislodgement during pulling of the cryobiopsy. Cryobiopsy was performed (ERBE Cryoprobe 1.9 mm diameter, length 1,050 mm) with a uniform freezing time of 4 s and the cryoprobe and bronchoscope were removed en bloc. Endobronchial blocker was inflated with air immediately after the removal of the cryoprobe from the airway for 2 mins before gradual deﬂation under direct vision. Each patient had one to three cryobiopsies. Cryobiopsy samples are thawed in saline and ﬁxed in formalin. Cytology specimens from the brush and needle are placed in cytolyt solution.

A recent meta-analysis discussed diagnostic yield and complications of TBLC for ILD (9). Of the 900 relevant citations, 11 were included in the systematic review for a total of 731 patients. Diagnostic yield ranged from 74% to 98% with a pooled estimate of 83% [95% conﬁdence interval (CI), 73–94]. The complication rate was relatively high with pooled estimates for pneumothorax and moderate to severe bleeding of 12% (95% CI, 3–21) and 39% (95% CI, 3–76) respectively. Bleeding severity was reclassiﬁed where possible based on details in the original publication, according to British Thoracic Society guidelines (10), with moderate and severe bleeding events pooled in the meta-analysis (11).

Although TBLC has a higher diagnostic yield than traditional transbronchial biopsies (TBLB) for ILD (74% vs. 34%), bleeding remains a concern (13). More grade 2 bleeding occurred in the TBLC (56%) than in the conventional forceps group (34%). As compared to SLB, TBLC has slightly lower yield but is much better tolerated (10).

Radial EBUS in TBLC for ILD

The data for RP-EBUS TBLC for ILD is also sparse but very encouraging.

Berim et al. (7) performed cryobiopsies for ILD in ten patients (six with RP-EBUS and four without RP-EBUS). In the 18 total RP-EBUS TBCB in six patients, two patients had no bleeding, three patients had grade 1 and one had grade 2 bleeding. No major life-threatening complications were reported. Bleeding severity score was used from published literature (11,13). No large hemorrhage was observed in the radial ultrasound group (six patients). In four patients that had cryobiopsies without EBUS, more bleeding complications were reported (grade 1 bleed was seen in two patients, one patient had grade 2 and one had grade 3 bleeding). Diagnostic yield was not reported.

Gnass et al. (15) performed two to five biopsies from two different segments of the same lobe for 20 patients with diffuse parenchymal involvement and had a diagnostic yield of 80%. Complications included pneumothorax requiring a chest tube drainage in one patient (5%), and a minor bleeding in a few patients. Overall as demonstrated in Table 1, RP-EBUS guided TBLC is a safe and effective method for ILD. 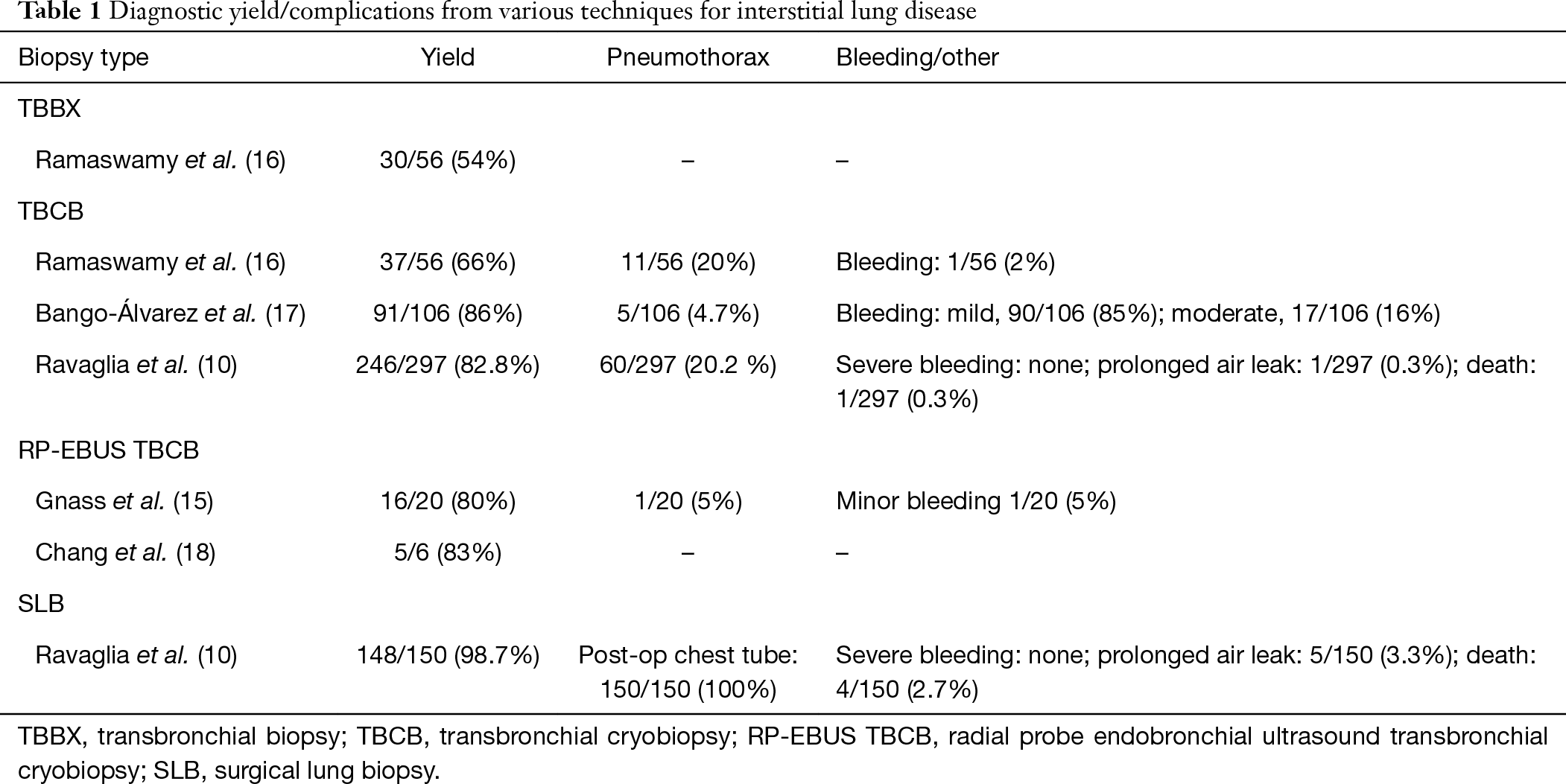 The data regarding the safety of RP-EBUS guided TBLC for the diagnosis of peripheral lung nodules is sparse and is mostly from single center experiences, poster presentations and case reports. It is a relatively newer procedure but overall the data is encouraging.

Schuhmann et al. (19) performed a total of 63 RP-EBUS TBLC in 31 patients with peripheral lung nodules. They used radial EBUS for peripheral lung masses of up to 4 cm. After identifying the lung lesion by radial EBUS, forceps biopsies and cryobiopsies were performed in a randomized order. The diagnostic yield of 61.3% (19 out of 31) for forceps and 74.2% (23 out of 31) for cryobiopsy was observed. Cryobiopsies were significantly larger than forceps biopsies (11.17 vs. 4.69 mm2, P<0.001). Only one case of moderate bleeding occurred during this study.

Brar et al. (20) used RP EBUS to localize the peripheral lung lesions. Conventional transbronchial biopsies were followed with TBLC in all patients. A total of 24 cryobiopsies were performed in 24 subjects. Pathological diagnosis was obtained in 56% for TBLC group vs. 52% in conventional transbronchial biopsies (P=0.795). No complications were reported possibly because of the use of RP EBUS.

Goyal et al. reported one minor bleed after performing two cryobiopsies for one patient with lung mass (21). It was a right upper lobe mass 2.4 cm × 2.1 cm which was not visible through conventional bronchoscopy. Using RP-EBUS the tumor was visualized in the anterior segment of the right upper lobe, and two cryobiopsies were taken. Largest size of the biopsy measured was 0.7 mm × 0.6 mm and established the diagnosis of small cell cancer.

Yap et al. reported no complications after two RP-EBUS TBLC in one patient with large B-cell lymphoma (22). Radial EBUS was used to localize the lesion within the lateral segment of the right middle lobe. The following sampling methods were performed sequentially: cytology brush, forcep, needle aspiration, and two cryobiopsies (1.9 mm, ERBE, Germany). Diagnosis was made only with the TBLC specimen.

Overall, from studies that have reported the number of biopsies performed, 117 RP-EBUS TBLC were performed in 66 subjects. There was seven minor and two moderate bleeds.

Several studies had no standard number of RP-EBUS TBLC per patient which was at the discretion of the bronchoscopist. Chang et al. (18) reported no complications from 11 patients (1–3 RP-EBUS TBLC per patient), Rodas et al. (24) described three moderate bleeds in ten patients, Torky et al. (25) reported seven moderate bleeding for 22 patients and Herath et al. reported no complications for six patients with unknown number of passes (8). Herath et al. (8) got larger, non-crushed samples to improve diagnostic capability and enhance molecular testing. RP-EBUS samples were obtained via conventional sampling methods (needle aspiration, forceps biopsy, and cytology brush), followed by a cryobiopsy. The mean diameter of cryobiopsy samples was twice the size of forceps biopsy samples, had a greater number of malignant cells per high power ﬁled and was the preferred sample selected for mutation analysis and molecular testing. There was no pneumothorax or signiﬁcant bleeding in the study.

The point to remember here is that not only is the number of passes variable in these early reports, the technique used, fluoroscopy use, endobronchial blocker uses and experience of the bronchoscopist is also very variable. For the diagnosis of patients with peripheral lung lesions, RP-EBUS TBCB was a very well tolerated procedure and had a better diagnostic yield compared to conventional transbronchial lung biopsies. 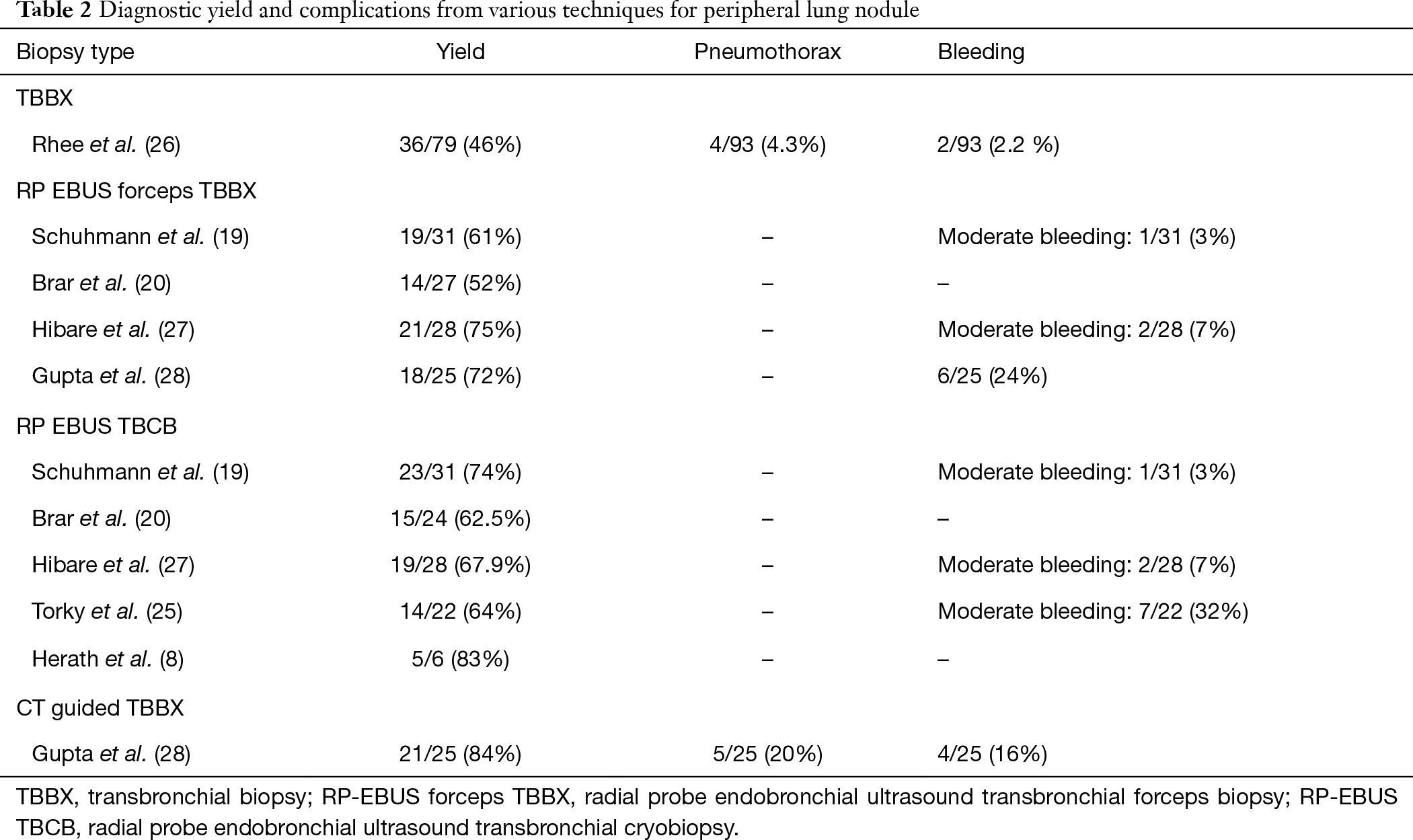 RP-EBUS guided TBLC appears to be a feasible and safe procedure with high diagnostic yield. However, the technique is not standardized, and the data is sparse. Larger prospective studies are needed to evaluate its efficacy, and safety profile. Clinical trials are currently underway comparing RP-EBUS TBLC vs. CT guided biopsy for peripheral lung masses (Middlemore Hospital, Auckland, New Zealand) and the role of RP-EBUS cryobiopsies in diffuse parenchymal lung disease (Vanderbilt University Medical Center).

Conflicts of Interest: the authors have no conflicts of interest to declare.