A high-flow nasal cannula (HFNC) is an alternative technique for oxygen delivery that has numerous physiological advantages. A recent observational cohort study including 115 immunocompromised patients admitted to ICUs because of ARF suggested that intubation and mortality rates may be lower in patients treated with HFNC alone than in those treated with conventional NIV (9). However, HFNC could potentially have a harmful effect on outcomes in cases where intubation was delayed in patients with acute hypoxemic respiratory failure (10). It is particularly difficult to predict who will benefit from the use of HFNC.

Therefore, we sought to identify the physiological predictors of the outcome of HFNC to assess the responsiveness of immunocompromised patients with ARF. These predictors could be helpful to physicians and have an impact in terms of clinical outcomes. In addition, because of the variety of causes for ARF, it is necessary to identify the factors associated with outcome in patients with application of HFNC for over 48 hours. In this study, we aimed to evaluate the potential physiological variables related to survival of immunocompromised patients with ARF treated with HFNC. We hypothesized that early improvement in physiological variables after HFNC therapy would be associated with a good outcome.

We retrospectively analyzed patients over 18 years old who received HFNC therapy after being admitted to a single tertiary referral academic care hospital in South Korea between January 2015 and July 2016. We included all immunocompromised patients including those with hematologic or solid cancers, recipients of stem-cell or solid-organ transplants, those undergoing immunosuppressive therapy for nonmalignant disease that included 10 mg prednisone/day for at least 30 days or equivalent cytotoxic drugs or acquired immune deficiency syndrome (AIDS), and who received HFNC for more than 48 h. Of these, we enrolled those patients who had ARF defined by the following criteria: a respiratory rate >20 breaths/min and subjective symptoms of respiratory distress and a calculated PaO2 to FiO2 ratio <300 mmHg. Patients with acute-on-chronic respiratory failure and those who had a tracheostomy or postextubation respiratory failure were excluded. In total, 91 subjects were included in the analysis (Figure 1). This study was approved by the Institutional Review Board of the Seoul National University Hospital (IRB No. H-1603-105-750). 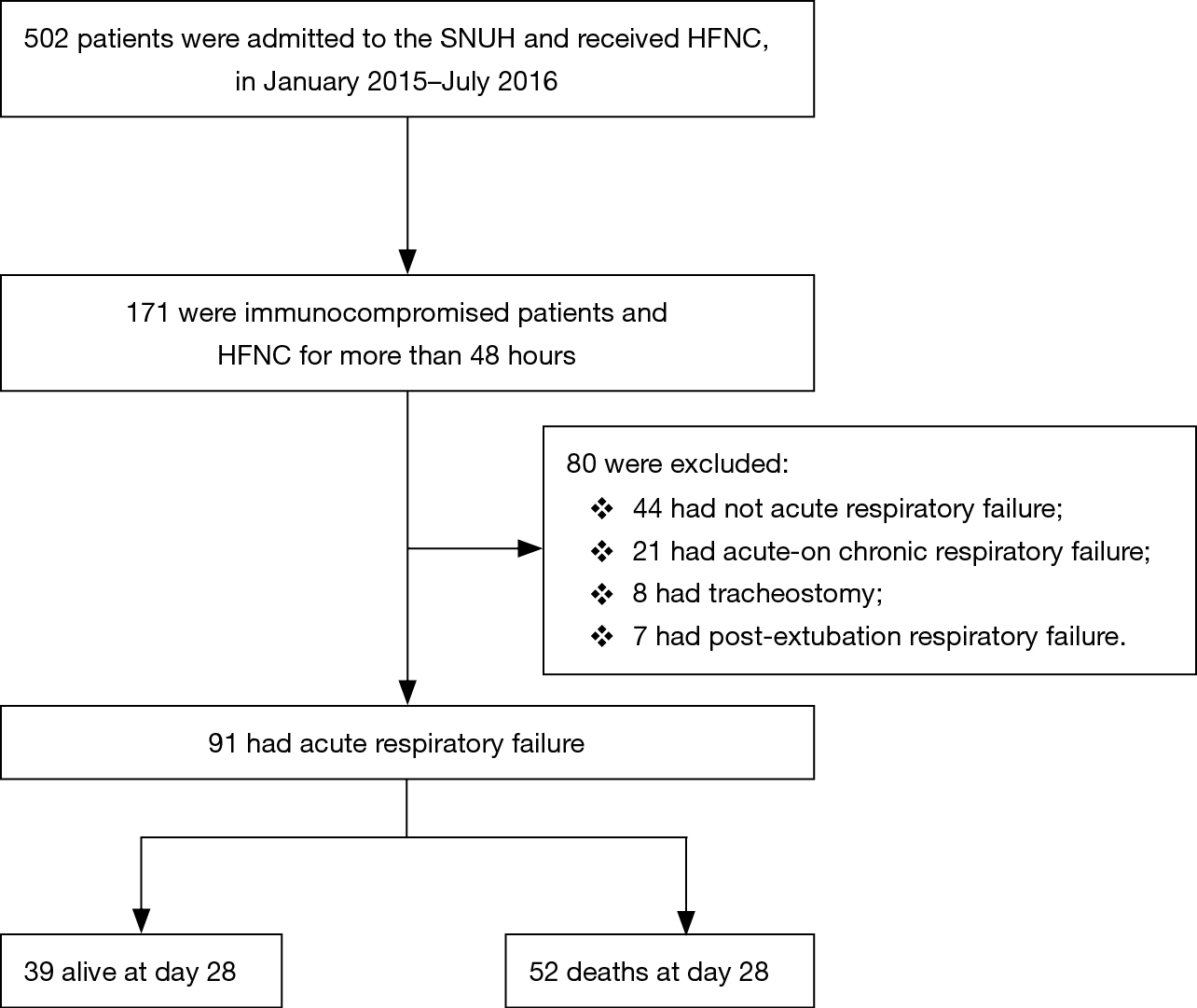 Patients who had respiratory and heart-rate responses to HFNC were defined as “RR responders” and “HR responders” when HFNC resulted in a decrease in the rates at 12, 24 and 48 h compared with baseline. The oxygenation response was evaluated by the SpO2/FiO2 ratio (SF ratio). Gas-exchange responses to HFNC were defined as follows: “SF12-, SF24-, or SF48-improved” when HFNC resulted in an increase in the SF ratio at 12, 24 or 48 h, respectively, compared with baseline. Patients with poor functional status were defined as those who were bedridden or who used a wheelchair.

All statistical analysis was performed using IBM Statistical Package for the Social Sciences ver. 21.0 (IBM SPSS Inc., Armonk, NY, USA). For intergroup comparisons, continuous variables were analyzed using Student’s t-test, or when data were not normally distributed, the nonparametric Mann-Whitney U test. Descriptive variables were analyzed using the chi-squared test or Fisher’s exact test when more than 20% of the expected cell frequencies <5. Kaplan-Meier curves were plotted to assess the time from 48 h after the initiation of HFNC to death within the first 28 days in SF-improved and SF-nonimproved groups and compared using the log-rank test. Logistic regression analysis was used to assess the risk factors for 28-day mortality. Variables that were associated with 28-day in-hospital mortality with P values less than 0.05 in univariate analysis were included in the multivariable logistic regression analysis. P values less than 0.05 were considered significant. The contribution of each potential risk factor was denoted by the odds ratio (OR) and associated 95% confidence interval (CI). 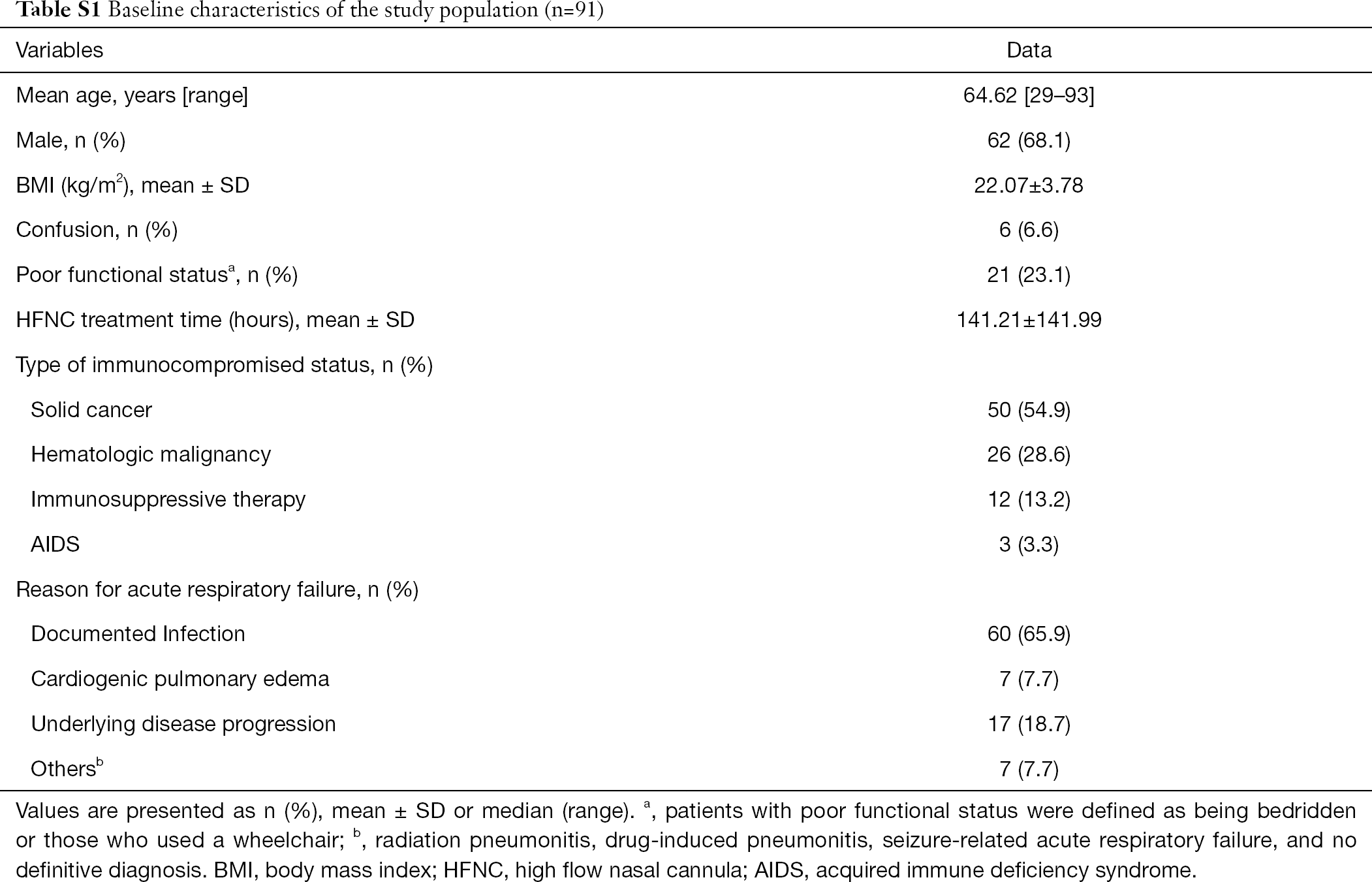 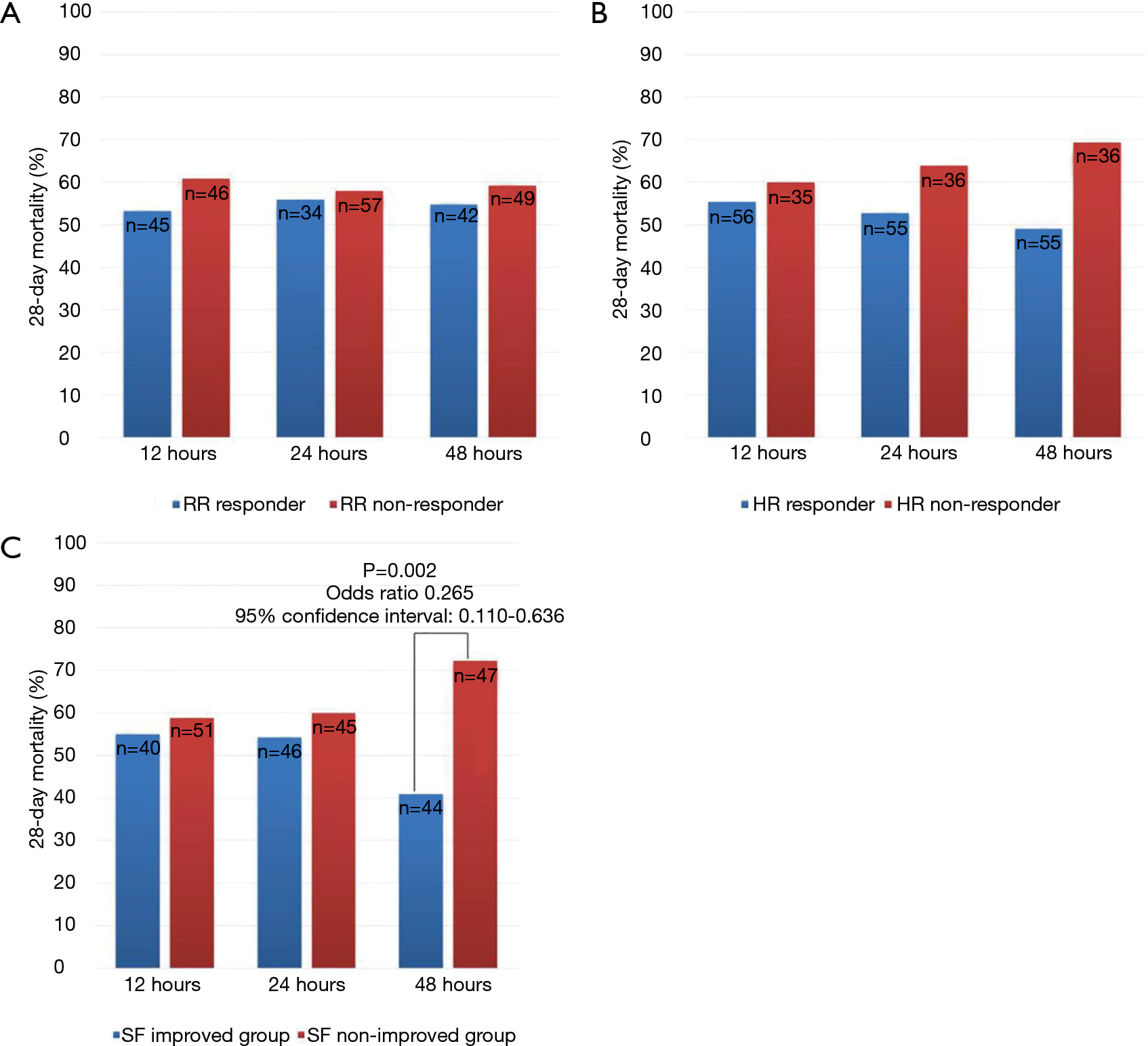 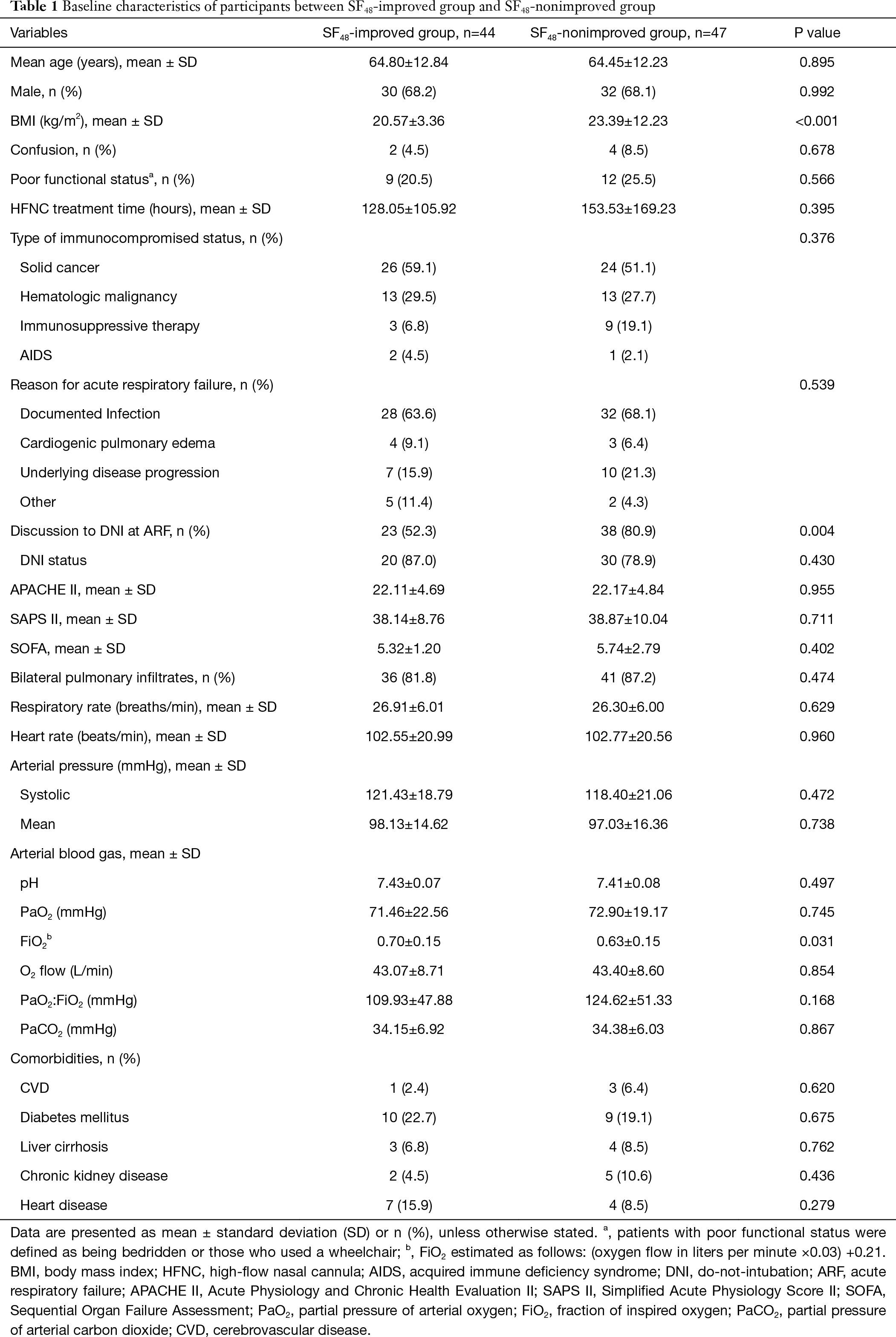 Table 4 lists the risk factors for in-hospital mortality at day 28 identified using logistic regression analysis. In univariate analysis, mortality was significantly associated with BMI, poor functional status, DNI status, the “SF48-improved” group, the reason for immunocompromise, and the severity of illness (APACHE II and SAPS II, not SOFA) at the time of initiation of HFNC. Using multivariate analysis, after adjustment for confounding factors, DNI status (OR 3.546; 95% CI, 3.546–52.354; P<0.001) was significantly associated with 28-day mortality. 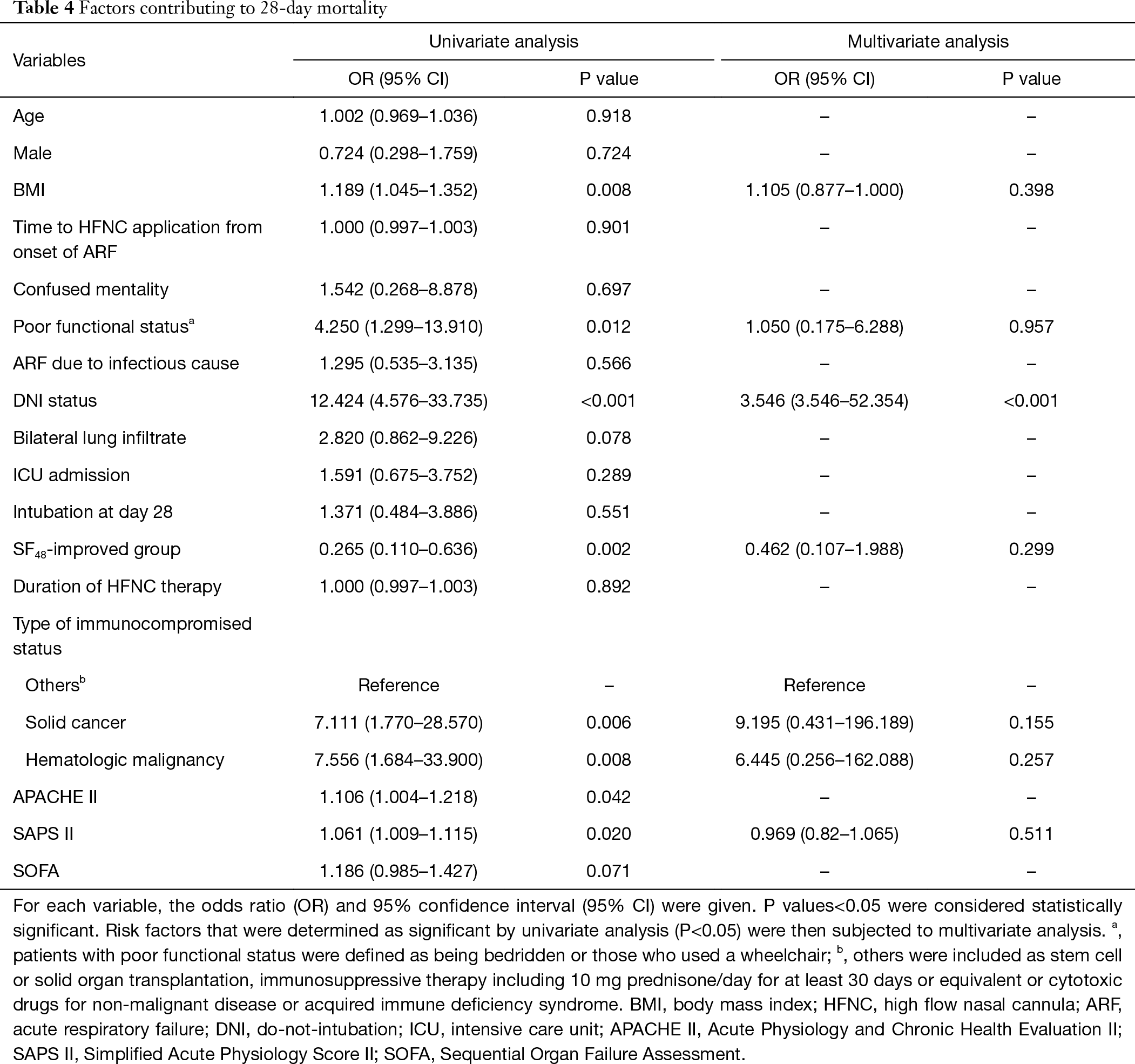 One of the important and controversial issues related to HFNC in immunocompromised patients with ARF is the early prediction and identification of HFNC failure. Consequently, any reliable predictors that can be easily obtained and are noninvasive would be very helpful to physicians. Our study revealed that improved oxygenation as evaluated by the SF ratio 48 h after initiation of HFNC oxygen therapy is associated with lower 28-day mortality in immunocompromised patients with ARF.

Kang et al. suggested the potential risk that the use of HFNC before intubation, which will delay the initiation of intubation for more than 48 h, may increase the risk of extubation failure, successful ventilator weaning, the number of ventilator-free days, and the overall ICU mortality (10). Their data suggest that delayed intubation may cause respiratory muscle weakness and cardiac dysfunction, which in turn lead to poor outcomes. Therefore, the ability to identify accurate predictors of the success of HFNC therapy is of particular interest. Our study demonstrates that serial evaluation of oxygenation changes is helpful in this prediction and in decision making.

The SF ratio has been demonstrated to be a reliable noninvasive surrogate for the PaO2/FiO2 (PF) ratio. Rice et al. showed that a cutoff of 235 for SF could predict acute respiratory distress syndrome with 85% sensitivity and 85% specificity and a cutoff of 315 for SF could predict acute lung injury with 91% sensitivity and 56% specificity, in adults with PF ratios of 200 and 300, respectively (11). The major advantage of the SF ratio is that it can be continuously monitored in a noninvasive manner. Our study showed that monitoring the SF ratio throughout HFNC delivery might be useful for predicting HFNC failure, especially during the first 48 h of HFNC respiratory support. When the SpO2 is over 97%, the oxyhemoglobin dissociation curve flattens and the reliability of the SF ratio is decreased, potentially leading to inadvertent hyperoxygenation. Therefore, we propose that a target SpO2 below 97% in HFNC treated patients should be considered. Using the SF ratio might help in early detection of worsening hypoxemia in immunocompromised patients with ARF receiving HFNC.

A retrospective analysis showed that failure to improve oxygenation within 24 h was a useful predictor of the requirement for intubation in consecutive patients with acute hypoxemic respiratory failure who had received HFNC therapy in the medical ICU (12). In that study, the most common cause of respiratory failure was pneumonia (36%), and according to a multivariate analysis, cardiogenic pulmonary edema as a cause of respiratory failure was independently associated with avoidance of intubation. In our study, the rate of infectious causes of ARF was 65.9%, which is more than twice the rate reported in the above-mentioned study. Our identification that analysis of subgroups classified according to the cause of ARF and the evidence for the effectiveness of HFNC is of importance when evaluating the outcome for immunocompromised patients with ARF.

We determined treatment response at a later time than that observed in previous studies, waiting 48 hours before predicting the outcome. This delay is very long to determine the risk of undue delayed intubation. Sztrymf et al. demonstrated that patients who had higher RR at 30 and 45 min, lower SpO2 at 15, 30 and 60 min, and lower PF ratio at 1 h after initiation of HFNC had poorer clinical outcomes (13). We hypothesized that early improvement in physiological variables after HFNC therapy would be associated with better outcomes. However, we observed associated mortality when the PF ratio improved at 48 hours rather than at 12 hours. Possibly, the trend and other factors should be considered rather than the response of a given physiologic parameter at a specific time.

RR and HR decreases were also included in the physiologic variables we analyzed. Several studies have shown that the RR is lower in patients treated with HFNC, while PaCO2 and tidal volumes remain constant (13-15). Sztrymf et al. investigated the efficiency, safety, and outcome of HFNC in ICU patients with ARF. Patients were enrolled when they either required more than 9 L/min of oxygen to achieve a SpO2 >92% or they exhibited persistent signs of respiratory distress. An oxygen flow of about 15 L/min via a face mask was replaced with HFNC. HFNC was associated with significant reductions in RR and HR (15). In other studies of NIV, increased RR under NIV was an independent predictor of NIV failure (16-18). However, in our study early improvement in the RR and HR at 12 h was observed even in the “SF48-nonimproved” group, indicating that continuous reevaluation of patients on HFNC is needed even after the first 12 h. The SF ratio might be considered a more reliable early variable than RR and HR under HFNC. This may be explained by the possibility that the higher RR and HR of ill patients may be influenced by anxiety, poor tolerance of HFNC or underlying disease (e.g., arrhythmia).

This study has several limitations. First, the single-center retrospective design and relatively small number of patients enrolled do not allow any generalization of these results. However, this is the first study of the effectiveness of serial changes in physiological variables for evaluating clinical outcomes in immunocompromised patients with ARF who receive HFNC. Second, the decision whether to offer HFNC to ARF patients was left to the physician in charge. Third, patients who were intubated or died within 48 h of HFNC initiation were excluded; therefore, it is possible that only patients with a relatively good response after HFNC application were included. Fourth, substantial heterogeneity existed in the types of ARF. Therefore, larger and multicenter studies could identify the subgroup of patients who are most likely to show physiological predictors of outcome when assessing the response to HFNC. Fifth, in our study, the rate of discussion of DNI during ARF was significantly higher (80.9% vs. 52.3%) in the “SF48-nonimproved” group than in the “SF48-improved” group. There is a selection bias between the two groups associated with outcomes and DNI status. The DNI group was included and was considered one of the most important factors. Because of the limitations in our study method, we could not analyze them in two groups (one group with DNI status and another without) and there seemed a limitation in interpreting the clinically relevant. Therefore, the results must be cautiously interpreted.

We would like to thank the patients who participated in this study and the clinical staff of the participating hospitals for their support.

Ethical Statement: This study was approved by the Institutional Review Board of the Seoul National University Hospital (IRB No. H-1603-105-750). Due to the retrospective nature of this study, informed consent was waived.