Post-translational modification (PTM) is involved in regulating many biological processes. The methylation of arginine residues is a common form of PTM, which is catalyzed by a distinct group of transmethylases known as the protein arginine methyltransferases (PRMTs). PRMTs widely exist in eukaryotic cells and participate in epigenetic regulation through the methylation of arginine residues of histone and/or transcription factors. In particular, such methylation modifications are performed by PRMTs, which catalyze and transfer methyl group (CH3) from S-adenosylmethionine (SAM) to the guanidine nitrogen of arginine residues. At present, PRMTs are classified into two subgroups according to the types of methylation they catalyze (Figure 1), namely type I and type II. The former one includes PRMT1, 2, 3, 4, 6, and 8, catalyze the formation of ω-NG-monomethyl arginine (MMA) and ω-NG, NG-asymmetric dimethylarginine (aDMA) (1-5), while the latter one covers PRMT5, 7, and 9, generate MMA and ω-NG, N'G-symmetric dimethylarginine (sDMA) residues (6). With each addition of CH3 to the guanidine nitrogen of arginine residues, a potential hydrogen bond donor would be removed, which further alters the structure of the target proteins. Both aDMA and sDMA, for example, can diversify the hydrophobicity and bulkiness of a target protein, which accordingly impact the protein-protein interaction, RNA processing, DNA repair, transduction of intracellular signaling, and regulation of gene expression. 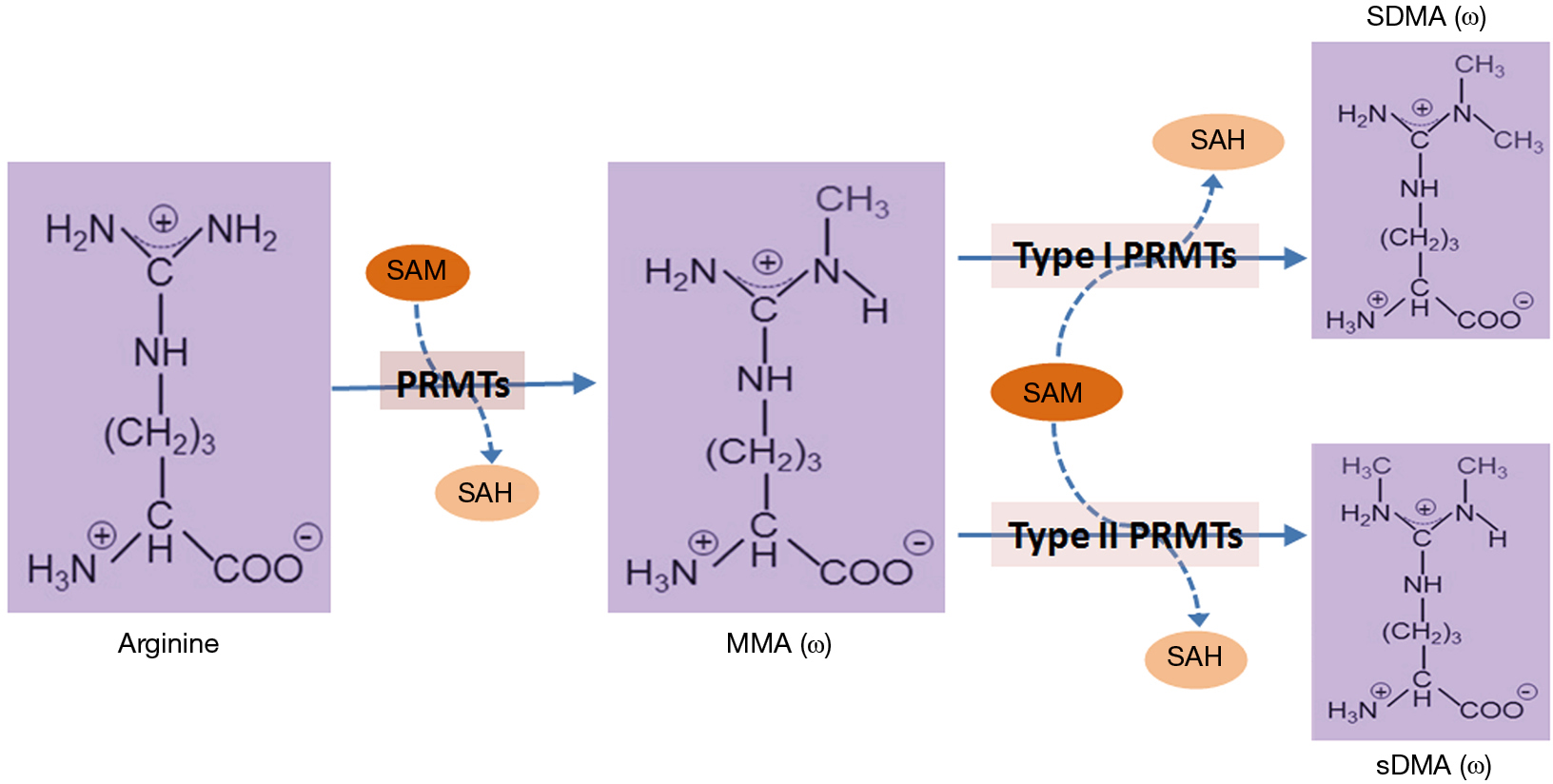 As one of the most typical representatives of symmetric arginine methyltransferases, both the complete loss and deactivation of PRMT5 can abrogate the growth and development of cancer cells (7,8). Typically, PRMT5 is abnormally overexpressed in cancer cells and involved in a variety of crucial cellular processes that regulate proliferation, differentiation, growth, invasion and metastasis of several kinds of cancer cells. It indicates that PRMT5 is implicated in the pathogenesis and progression of various cancers. Insights into the effects of PRMT5 on tumorigenesis and progression of lung cancer are expected to provide new approaches for the prevention and diagnosis of lung cancer. In addition, it is necessary to emphasize the evidence that links PRMT5-induced methylation with lung cancer progression.

PRMT5, as a human homolog of Hsl7 (Saccharomyces cerevisiae) and Skb1 (Schizosaccharomyces pombe), was initially identified as an interacting protein of Janus tyrosine kinase 2 (Jak2), and accordingly, it is usually referred to as Jak-binding protein 1 (JBP1). PRMT5 is located in human chromosome 14q11.2, with its upstream genes of Jub, c14 and f94 and downstream genes of RNA binding motif protein 23 (RBM23), and its structure sequence is highly conservative. What is more, the C-terminal of PRMT5 contains one classic Rossmann fold and two alpha helixes, both of which are the binding sites of SAM (also known as AdoMet). These special domains are assembled with the barrel structure of N-terminal and further form a slit structure which provides options to bind with protein substrate specifically (Figure 2). Histones are the major substrates of PRMT5 and the methylation has a significant effect on the expression of the downstream genes. Furthermore, the PRMT5-driven arginine methylation of histone H2a (H2aR3me2s), H4 (H4R3me2s) and H3 (H3R8me2s, H3R2me2s) can alter chromatin structure and induce transcriptional repression. The methylation of H4R3 and H3R8 induced by PRMT5 are usually considered to be correlated with repression of transcription (9-12), whereas H3R8me2s methylated by PRMT5 is occasionally related to transcriptional activation (10). Through the transcriptional regulation, PRMT5 can participate in controlling various cellular processes, such as proliferation, differentiation, invasion, migration, apoptosis, etc. 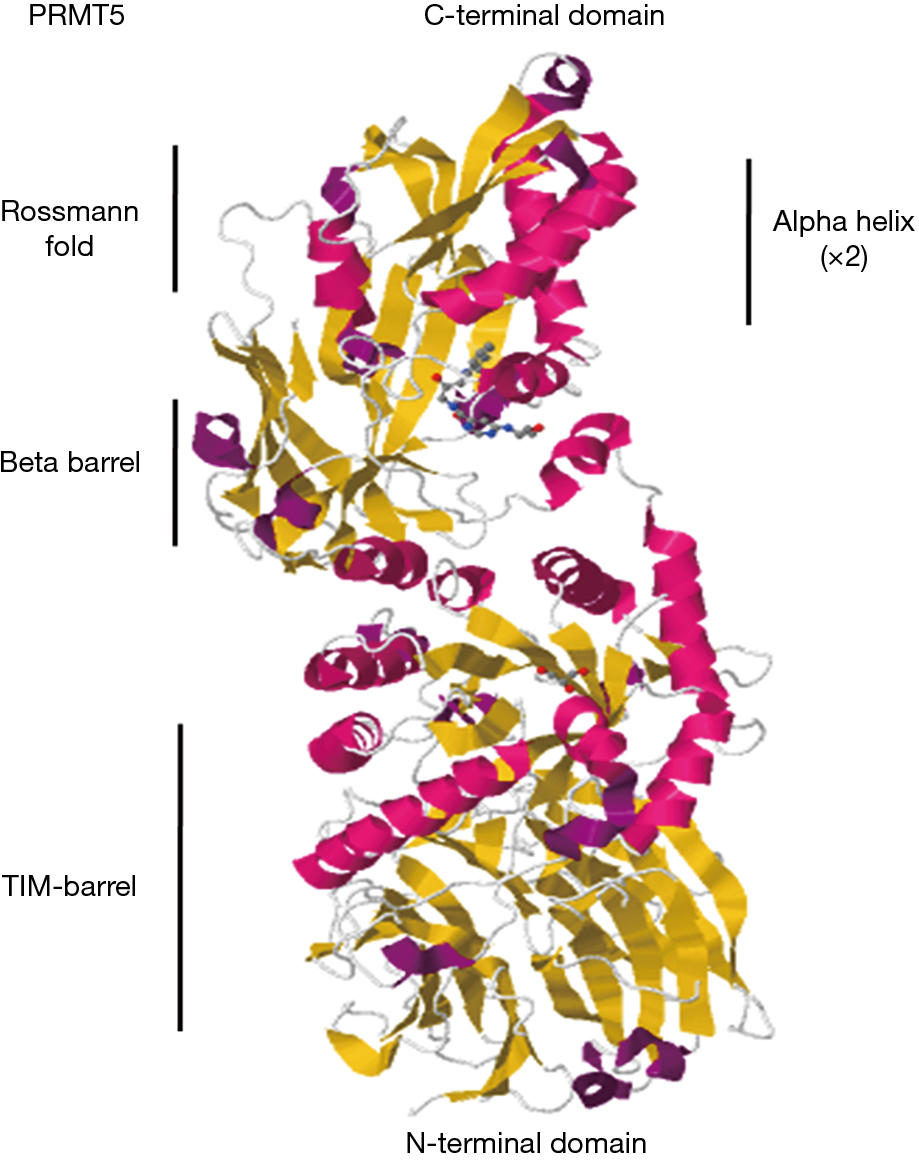 Figure 2 The domains and substructures of a monomer of PRMT5. PRMT, protein arginine methyltransferase.

The expression and sub-cellular localization of PRMT5 are various in different cells and at different stages. PRMT5 has been reported to be overexpressed in several cancer cells, including lung cancer (8,12), prostate cancer (13), breast cancer (14,15), lymphoma (16), and myeloid leukemia (10,17,18). PRMT5 was not only detected in the nucleus during the early development of mouse, but also observed in the cytoplasm of the inner cells by embryonic day 6.5 (7,19).

In addition to the findings above, PRMT5 was found in both the nucleus and the cytoplasm in mammalian cells. In the cytoplasm, PRMT5 binds with pICln and Sm protein to form a complex, which significantly increased the integration with the survival motor neuron (20). PRMT5 also could form a complex with p44 and pICln with distinct substrate specificity, which methylated SmD3 substrate (13). In the nucleus, PRMT5 appears to form SWI/SNF and NURD chromatin remodeling complexes. In addition, there are significant differences in the sub-cellular localization of PRMT5 between tumor and normal tissues and between cancer subtypes. PRMT5 was observed in the cytoplasm in prostate cancer cells, whereas in benign prostate epithelium cells (13), it was mainly detected in the nucleus. In lung cancer, with the increase of malignancy, the total level of PRMT5 was increased, followed by the gradual increase of the corresponding cytoplasm staining (21). Up-regulation of PRMT5 was mainly located in cytoplasm in non-small cell lung cancer (NSCLC) and was closely related to the poorer outcome, whereas raised nuclear PRMT5 most often occurs in well differentiated cancer instead of poorly differentiated small cell lung cancer and large cell neuroendocrine carcinoma (22). We previously reported that PRMT5 contains three nuclear exclusion signals (NES, including PRMT5 amino acid residues: 1–90, 500–560, 576–637), which mediated the transformation of PRMT5 subcellular localization (13). Distinct types of subcellular localization of PRMT5 during tumorigenesis play different roles. The nuclear PRMT5 suppresses growth of prostate cancer cells, while the cytoplasmic PRMT5 promotes prostate cancer cell growth via methylating substrates. According to these studies, the transformation of PRMT5 subcellular localization is indicated to occur during tumorigenesis, and different subcellular localization of PRMT5 may have cell specificity, or show that it is at different stages of cellular biological function.

PRMT5 modulates lung cancer progression primarily through the methylation of histone or non-histone substrates. The methylation of epidermal growth factor receptors (EGFR) catalyzed by PRMT5 decreased its auto-phosphorylation, weakening its activity and regulated cell proliferation and growth (24). PRMT5 also directly repressed the transcription of the miR-99 family (miR-99a, miR-99b, and miR-100) by using symmetrical dimethylation of histone H4R3 (H4R3me2s). This transcription inhibition increased the FGFR3 expression and in turn activated Erk1/2 and Akt, leading to cell growth and metastasis of lung cancer (8,12). Additionally, knockdown of PRMT5 resulted in a significant loss of the growth and metastatic potentials of lung cancer cells. This phenotypic regulation was mediated through the EMT response of TGF-β treatment, which dramatically increased the relative enrichment of PRMT5 protein and changed EMT related protein markers with decrease of E-cadherin and increase of Vimentin and Snail. Meanwhile, the treatment of TGF-β caused an accumulation of H4R3me2s and H3R2me2s (23). Furthermore, with the help of Ajuba (a bridging molecule), PRMT5 interacted with Snail, which in turn repressed the expression of E-cadherin, resulting in the EMT process (25). Besides, PRMT5 modulated cancer progression through the regulation of gene p53, p65, E2F-1, enolase-1 (Eno-1), eukaryotic translation initiation factor (eIF4E), programmed cell death 4 (PDCD4), transcription of involucrin (hINV) Krüppel-like factor 4 (KLF4, GKLF) and microphthalmia-associated transcription factor (MITF) (14,15,26-31).

In addition, the modulation of cell cycle progression induced by PRMT5 was involved in tumor growth and metastasis (8,12,31,32). Silencing the expression of PRMT5 attenuated the cell cycle in NIH3T3 cells and arrested cell cycle at G1 phase in 293T, MCF7 and A549 cells, and eventually induced necrosis (8,27,33), It also resulted in an increase of p27 (Kip1), which inhibited the cell cycle progression (30). On the contrary, upregulation of PRMT5 increased the expression of the positive regulators of G1 phase, such as cyclin D1, cyclin D2, cyclin E1, CDK4, and CDK6, and simultaneously reduced the expression of related negative regulator of G1 phase, such as Rb protein (33). Consequently, as manifested by these results, the slowed growth of cancer cells induced by PRMT5 knockdown was partially attributed to the arrest of cell cycle at the G1 phase.

To sum up, we laid the emphasis on the arginine methylation of histone introduced by PRMT5 and highlighted its growth and metastasis promoting effects. PRMT5 had been demonstrated to be vital for the growth and metastasis of lung cancer, and was closely correlated with clinical stages, lymph nodes metastasis and poor survival in lung cancer patients. Overexpression of PRMT5 promoted metastasis and indicated poor prognosis of lung cancer, while both down-regulation of PTMT5 and inhibition of its methyltransferase activity resulted in slow growth and decreased metastasis. Consequently, PRMT5, as a potential biomarker for identifying lung cancer with more aggressiveness, will be very meaningful. It also raised an interesting possibility that targeting PRMT5 may inhibit both growth and metastasis potentials of lung cancer. Currently, several small molecule inhibitors targeting PRMT5, such as EPZ015666 (GSK3235025) (34,35), C9 (36), HLCL61 (10) and PJ-68 (18) had been developed or validated (35,37-39). Although there were no clinical applications for these inhibitors, several studies had expounded that they play important roles in the growth inhibition of lung cancer. The further evaluation of these inhibitors for lung cancer treatment is necessary and expected to be carried out imminently.