In recent years, transcatheter aortic valve replacement (TAVR) has become crucial to interventional therapy for patients with severe symptomatic aortic stenosis. Most of the patients undergoing TAVR are in poor medical conditions and of advanced age (1). Surgical treatment by means of conventional aortic valve replacement in these cases is associated with a higher risk of mortality (2-4). At the same time conservative standard treatment options are limited. 50% of patients with symptomatic aortic stenosis who are being treated conservatively die within 2 years (5,6). This stands in contrast to patients undergoing TAVR where 1-year mortality is around 17% (7).

However, a significant problem in using TAVR is the lack of an established risk evaluation system in order to identify patients who could profit from TAVR at an acceptable risk to the patient. This stands in contrast to more conventional surgeries such as intubation, thoracotomy or a heart-lung machine which all have well established risk score systems, for example the logistic European System for Cardiac Operative Risk Evaluation (log Euroscore) (8) or the Society of Thoracic Surgeons’ Risk Score (STS) (9). Further complicating matters are that these scores were designed for a patient population with a lower mean age [e.g., 62.5±10.7 years in the Euroscore database as opposed to 81.5 for TAVR (PARTNER II Trial)].

Serum albumin is synthesized in the liver and is the main plasma protein regulating colloid-osmotic pressure. Hypoalbuminemia [defined as serum albumin <3.5 g/dL (10)] is associated with frailty and malnutrition and could potentially be used as a biomarker. It is easy to quantify, part of most standard preoperative laboratory diagnostics and importantly, albumin levels are not vulnerable to short-term variation. Hypoalbuminemia has been found to be predictive for acute kidney injury (AKI) (11) and is further connected to higher infection rates and mortality (12,13). We therefore carried out a retrospective study in order to establish the prognostic value of serum albumin in predicting postoperative complications such as AKI, blood transfusion rates, infection, elongation of hospitalization and early mortality in patients who undergo TAVR at a high-volume single center in Germany.

Records for 457 patients who underwent the TAVR procedure in a period from January 2014 to December 2015 in the Department of Cardiothoracic Surgery and the Department of Internal Medicine III at the University of Cologne, Germany were collected. All data including preoperative baseline characteristics, laboratory parameters, postoperative complications, length of hospital stay (LOS) and mortality were extracted from clinical documentation such as general medical reports, documented anamnesis at the time of the procedure, surgery reports, intensive or intermediate care unit reports and medical reports after the procedure. Institutional Review Board at the University of Cologne waived consent. Kidney Disease Improving Global Outcomes (KDIG) standards for AKI were used to interpret pre- and post-procedural creatinine values in order to complete data on post-interventional AKI. The postoperative 30-day evaluation for patients who underwent TAVR was assessed for 30-day mortality rates. The log Euroscore and STS risk score were calculated for every patient respectively using collected data.

Serum albumin analysis is part of the standard pre-procedural blood diagnostics at our institution and was performed using the bromocresol green method (14). To analyze the impact of pre-procedural serum albumin, patients were categorized into a low (<3.5 g/L) and normal serum albumin (≥3.5 g/L) group according to previously published studies (10,12).

Pre-, peri-, and postoperative covariates are described using mean values ± standard deviation (SD), median [25th–75th percentile], or frequencies and percentages. Differences between two groups were evaluated using chi-square test or Fisher’s exact tests for categorical variables and unpaired t-tests or Mann-Whitney U tests for continuous variables, depending on whether the assumption of normality holds or not. Univariable and multivariable logistic regression models were fitted to estimate the unadjusted and adjusted effect of low vs. normal serum albumin on clinically relevant endpoints, i.e., on AKI, infection, ventilation and transfusion of packed red blood cells. Covariates for the multivariable analyses were identified by the clinical context, without further model selection. Due to the low number of events we did not fit regression models for mortality endpoints. For logistic regression models, odds ratios (OR), corresponding 95% confidence intervals (CIs), and P values (Wald test) are given. All reported P values are two-sided and P values of <0.05 are considered statistically significant. As these are explorative analyses, we did not adjust for multiple testing. Statistical analyses were performed using IBM SPSS Statistics version 24 (IBM Corp, Armonk, New York, United States) in cooperation with the Institute of Medical Statistics and Computational Biology at the University of Cologne. 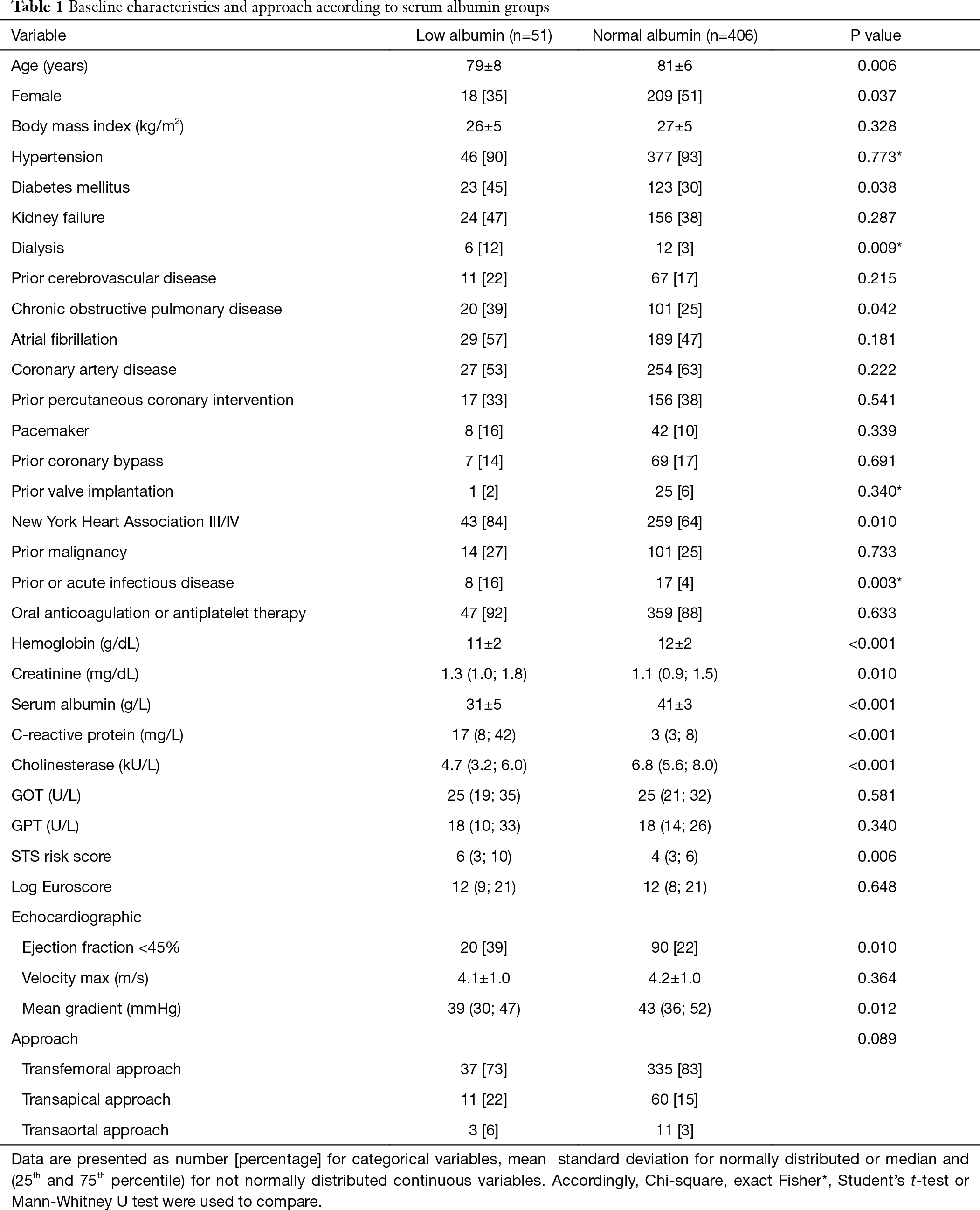 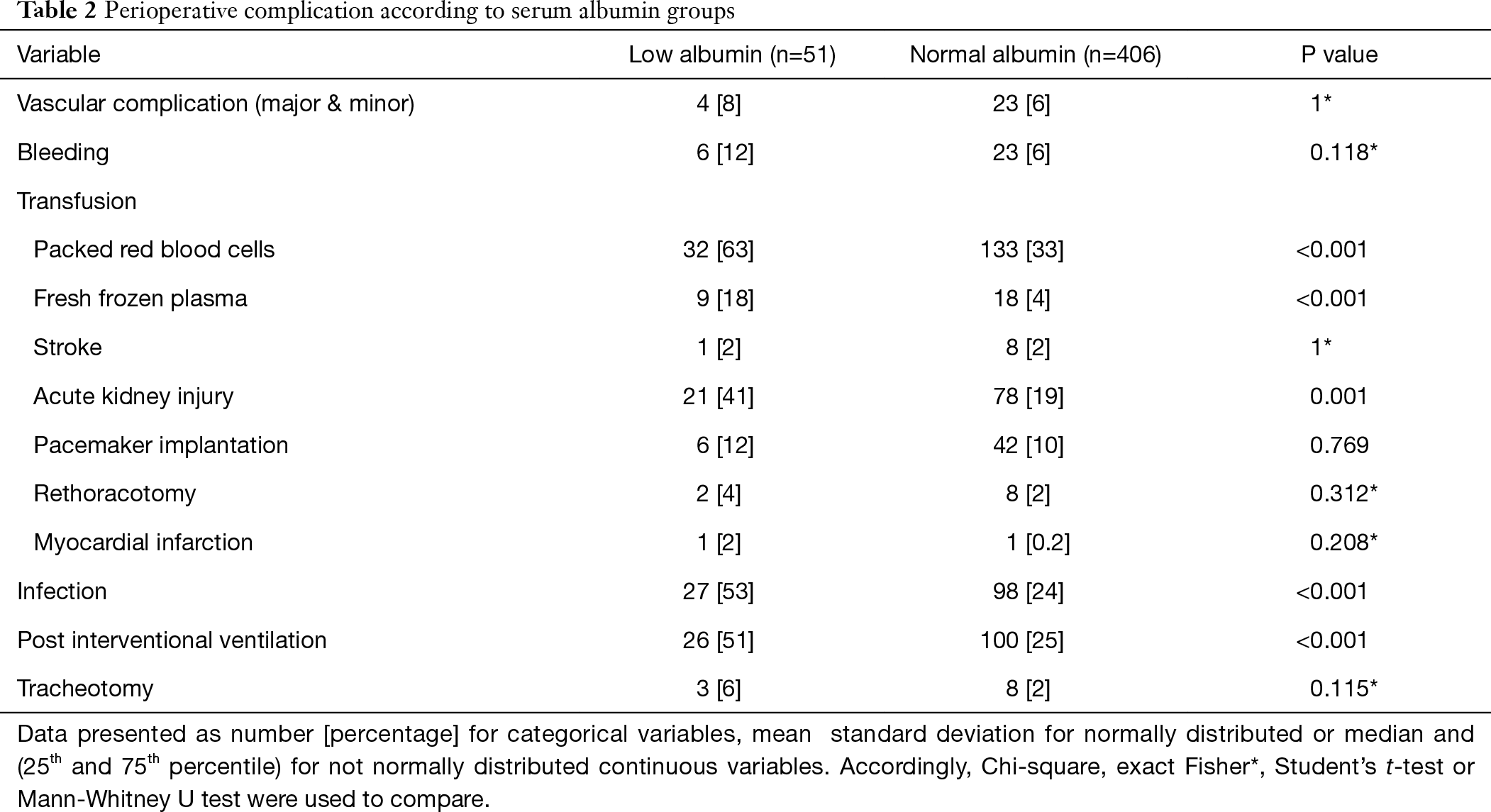 For the endpoint AKI (Table 4), the univariable model revealed a statistically significant difference between albumin groups (low vs. normal albumin: OR, 2.97, 95% CI, 1.6–5.5, P=0.001). The magnitude of effect size remained stable in the multivariable model (OR, 3.09, 95% CI, 1.5–6.5, P=0.003), adjusted for age, gender, diabetes mellitus, hypertension, kidney failure and left ventricular ejection fraction (LVEF) <45%. The variables were selected according to clinical criteria and all variables considered relevant for adjustment were taken into account. Further, univariable models present a statistically significant higher chance for infection, ventilation und transfusion of packed red blood cells in the low albumin group which also persists in the multivariable regression analysis as shown in Table 4. 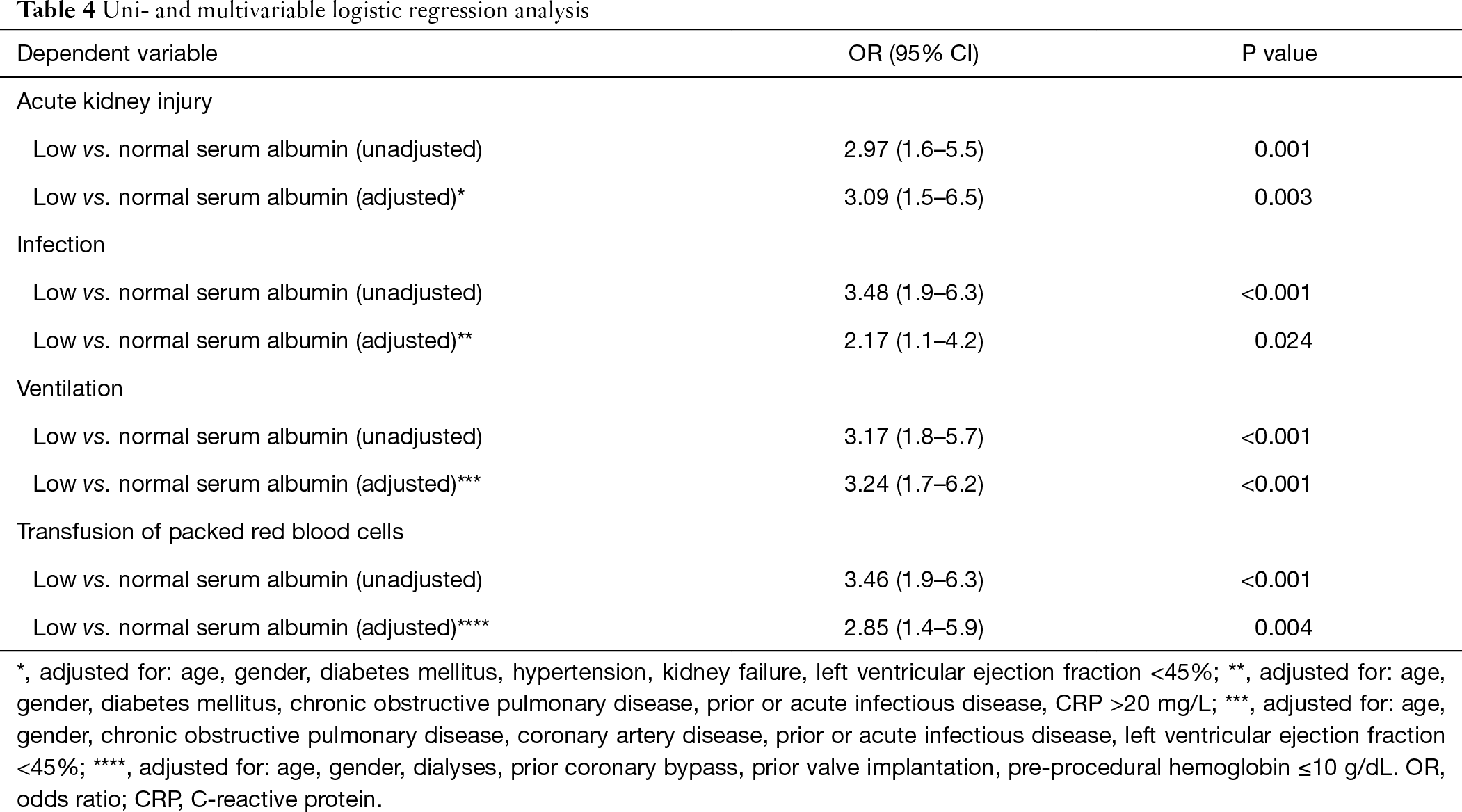 Some of these can potentially be self-contained. Pathophysiological mechanisms can explain that low serum albumin levels can lead to a decreased colloid-osmotic pressure in plasma and consequently to a lower intravasal volume resulting in a pre-renal acute kidney failure (16). At the same time, patients receive nephrotoxic contrast agents as part of the TAVR procedure which supports periinterventional AKI (17). Need for more transfusions of packed red blood cells and FFP could be explained by the fact that hemoglobin levels were also lower before surgery and that patients suffered from anemia of different causes.

Vascular complications were not significantly different in both groups. Nevertheless, a different surgical technique in the transfemoral approach could avoid access related complications. In most cases, a percutaneous approach is performed for the transfemoral TAVR procedure. Cardounel et al. demonstrated that the use of conscious sedation and surgical cut down for femoral arterial access resulted in a major vascular complication rate of less than 1% and low in-hospital mortality rates without any significant increase in wound complications (18).

Importantly, after a 30-day follow-up, more patients with hypoalbuminemia died in this study (10% as opposed to 3%) as well as in the Koifman et al. study [12% as opposed to 6% (20)]. The Koifman et al. study expands this to 1 year follow up mortality rates of nearly 30% in hypoalbuminemic patients compared to 20% in controls (20). It follows that albumin levels appear to be of prognostic value for patient risk and should be included to risk estimates prior to TAVR procedure.

Further, a trial of pre-procedural albumin substitution in TAVR patients presenting hypoalbuminemia would be timely. In a recent study of coronary bypass surgery, Lee et al. substituted albumin before off pump bypass surgery and compared it with placebo (21). There was no difference in mortality rate among groups, however the authors saw an effect in postoperative renal function. Preprocedural substitution of albumin led to a decreased rate of AKI (21). This study as well as the Koifman et al. study did show differences in mortality rates after TAVR. It is tempting to speculate that albumin substitution could remedy the difference we see between patients with low and normal pre-operative serum albumin levels undergoing TAVR.

The value of this study is limited by its retrospective design, a small group of preprocedural low serum albumin patients and being performed on a single center registry. Furthermore, 30-day mortality cannot be sufficiently evaluated in a uni- and multivariable logistic regression analysis which could support the prognostic value of serum albumin and quantify the impact of covariates.

Patients with hypoalbuminemia reveal severe comorbidities. Mostly, elderly patients undergo TAVR and should be well prepared before the procedure. Our data enforces that serum albumin is an important preoperative marker. Low serum albumin is one of many other preoperative laboratory markers.