Recent advances in imaging technology in the field of lung cancer have enabled the stratification of peripheral non-small cell lung cancer (NSCLC) patients according to their prognosis by evaluating the high-resolution computed tomography (HRCT) features of their lung tumor (1-5). The ratio of the maximum consolidation diameter to the maximum tumor diameter is widely accepted for predicting the outcome of patients who underwent not only pulmonary resection but also stereotactic body radiotherapy (4,6). Patients with a smaller proportion of solid-part size in lung cancer on HRCT had a significantly lower recurrence rate regardless of the operative procedures, suggesting that the separate measurements of the solid-part size and the whole tumor size are highly beneficial for tailored treatment planning (2,4). Although decreased CT-measured solid-part size of lung cancer, especially adenocarcinoma, is reported to be a better prognostic factor, small lung lesions with an irregularly shaped solid part in the greatest dimension are often encountered and can cause intraobserver and interobserver variability in practice.

To address the issue, we preoperatively take advantage of three-dimensional (3D) visualization using volume rendered imaging technique (3D-VRT) not only for surgical simulation but also for possible prediction of the pathobiological features of a lung tumor and prognostic outcomes by conducting volumetric quantification of the solid and non-solid parts separately using a 3DCT workstation (Fujifilm Synapse Vincent system; Fujifilm Corp., Tokyo, Japan) (7-11). Semiautomatic volumetric measurement of a tumor presents a pixel-wise segmentation of the 3DCT volume depending on the attenuation of each single voxel. As the calculation of the solid-part and non-solid-part volume based on 3D-VRT is consistent, the volumetric quantification is more likely to reflect the patient’s prognosis.

This study aimed to investigate the clinical outcomes and pathological malignant grade of patients with resected clinical stage I NSCLC by comparing preoperative HRCT and 3D-VRT oriented radiologic parameters such as solid-part size and solid-part volume.

We identified 252 patients with clinical stage I NSCLC who underwent complete resection between January 2012 and December 2015 at our department. HRCT and 3DCT were preoperatively performed for all patients using the Fujifilm Synapse Vincent system. The Tumor Node Metastasis (TNM) stage was determined in accordance with the 8th edition of the TNM classification of malignant tumors (12). Preoperative evaluation included physical examination, chest radiography, chest and abdomen CT, blood examination, and F-18 fluorodeoxyglucose-positron emission tomography/computed tomography (FDG-PET/CT). The protocols for data collection and analysis were approved and the need to obtain written informed consent from each patient was waived by the Institutional Review Board of Tokyo Medical University.

The patients underwent contrast-enhanced CT imaging using a 64-channel multidetector CT system (Light Speed VCT, GE Medical systems, Milwaukee, WI, USA). Axial sections (1.25 mm in thickness) of the whole lung were reconstructed at intervals of 1.0 mm, and images were viewed on standard lung windows (level, −600 HU; width 1,500 HU) with the sharp kernel of the version “LUNG” and mediastinal windows (level, 30 HU; width 400 HU). Each CT image was acquired within 1 breath hold of about 5 s, after a delay of 70 s during which the contrast media injection took effect.

HRCT scans were evaluated by at least 2 surgeons (Y Shimada, H Furumoto, K Imai) and 1 radiologist (R Masuno) in consensus. We defined the soli-part size as the maximum dimension of the solid component of the lung windows excluding non-solid-part and measured the maximum diameter of tumor on axial CT slices (Figure 1). Non-solid-part representing ground glass opacity was defined as a misty increase in lung attenuation that did not obscure the underlying vascular markings.

The presented CT scan protocol has been used for both standard staging for lung cancer patients amenable to contrast radiography and 3D image conversion using the Synapse Vincent system. After digital imaging and communication in medicine data were transferred to a workstation using the indicated software, 3D-VRT were performed (Figure 1). In terms of volumetric measurement of a lung tumor, a density level of −300 HU is the threshold level that separate solid-part from non-solid-part by the software algorithm. This 3D tumor analysis provided the whole tumor volume, solid-part volume, and non-solid-part volume separately. The semiautomated volumetric analysis performed by the software needed to be adjusted manually. The results were confirmed in consensus (2 or 3 surgeons, Y Shimada, H Furumoto, K Imai, 1 radiologist, R Masuno).

The available pathology reports for all the 252 surgical specimens were reviewed in this study. Blood vessel invasion (V) was identified by the presence of erythrocytes in the lumen or an endothelial cell lining, or the presence of elastic tissue around large vessels while lymphatic invasion (Ly) was determined to be present when tumor cells floating in lymphatic vessels with no supporting smooth muscles or elastic fibers were identified. Resected lymph nodes were sectioned thicker than 2 mm and correctly embedded to ensure that the pathologists can identify all macro-metastases. At least single or 2 sections from blocks were prepared for diagnosis. Pathological invasive factors were defined as positive Ly, V, pleural invasion (PL), or lymph node metastasis. Overall survival (OS) was measured from the date of surgery to the date of death from any cause or the date on which the patients were last known to be alive. Disease-free survival (DFS) was measured from the date of surgery until the first event (relapse or death from any cause or the last follow-up visit).

The receiver operating characteristic (ROC) curves of each parameter were used to predict recurrence. The area under the ROC curve (AUC) with its 95% confidence interval (CI) was measured. OS and DFS curves were plotted using the Kaplan-Meier method, and differences in variables were determined using the log-rank test. Categorical comparison was performed using the Pearson chi-squared test for discrete data and Student t-test for continuous data. Pearson correlation coefficient was used to determine the correlation between solid-part size and solid-part volume and the value of the coefficient of determination (R2) was also provided. HRCT and 3DCT parameters measured by three observers were recorded, and interobserver variability by using a random sample of 100 patients was calculated for intraclass correlation coefficient (ICC). Univariate analysis for OS and DFS was performed using the Cox proportional hazards regression model whereas multivariate analysis was conducted with a stepwise variable selection for the Cox model. All tests were two-sided, and P values of less than 0.05 were considered to indicate a statistically significant difference. SPSS statistical software package (version 24.0; DDR3 RDIMM, SPSS Inc., Chicago, IL, USA) was used for statistical analysis. 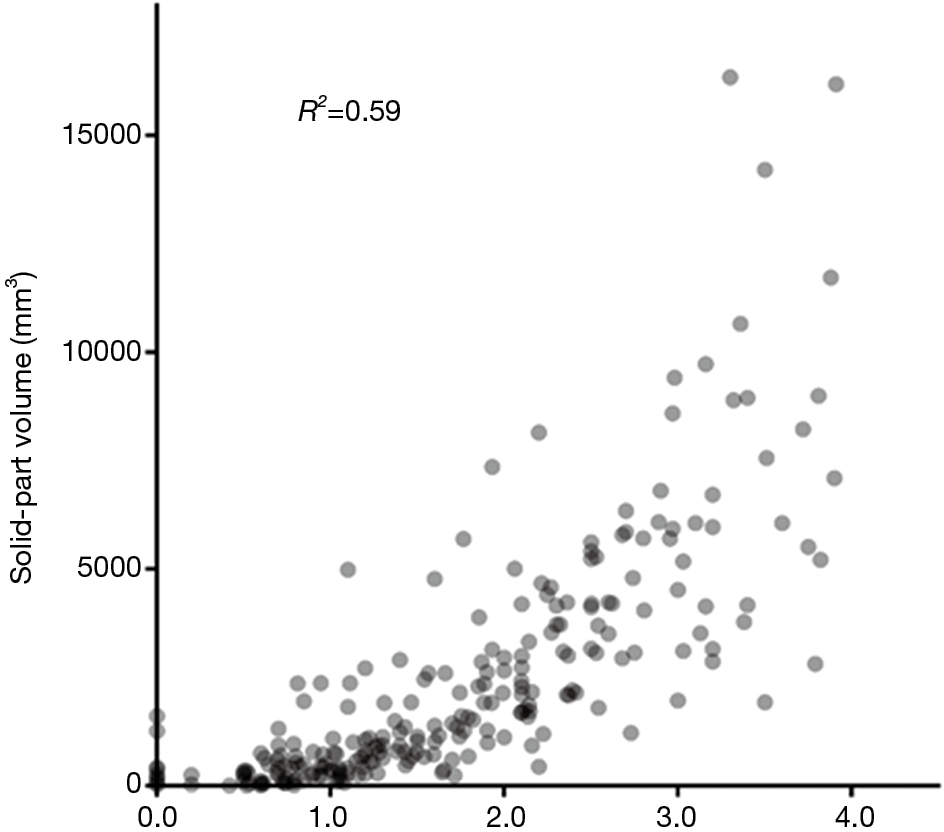 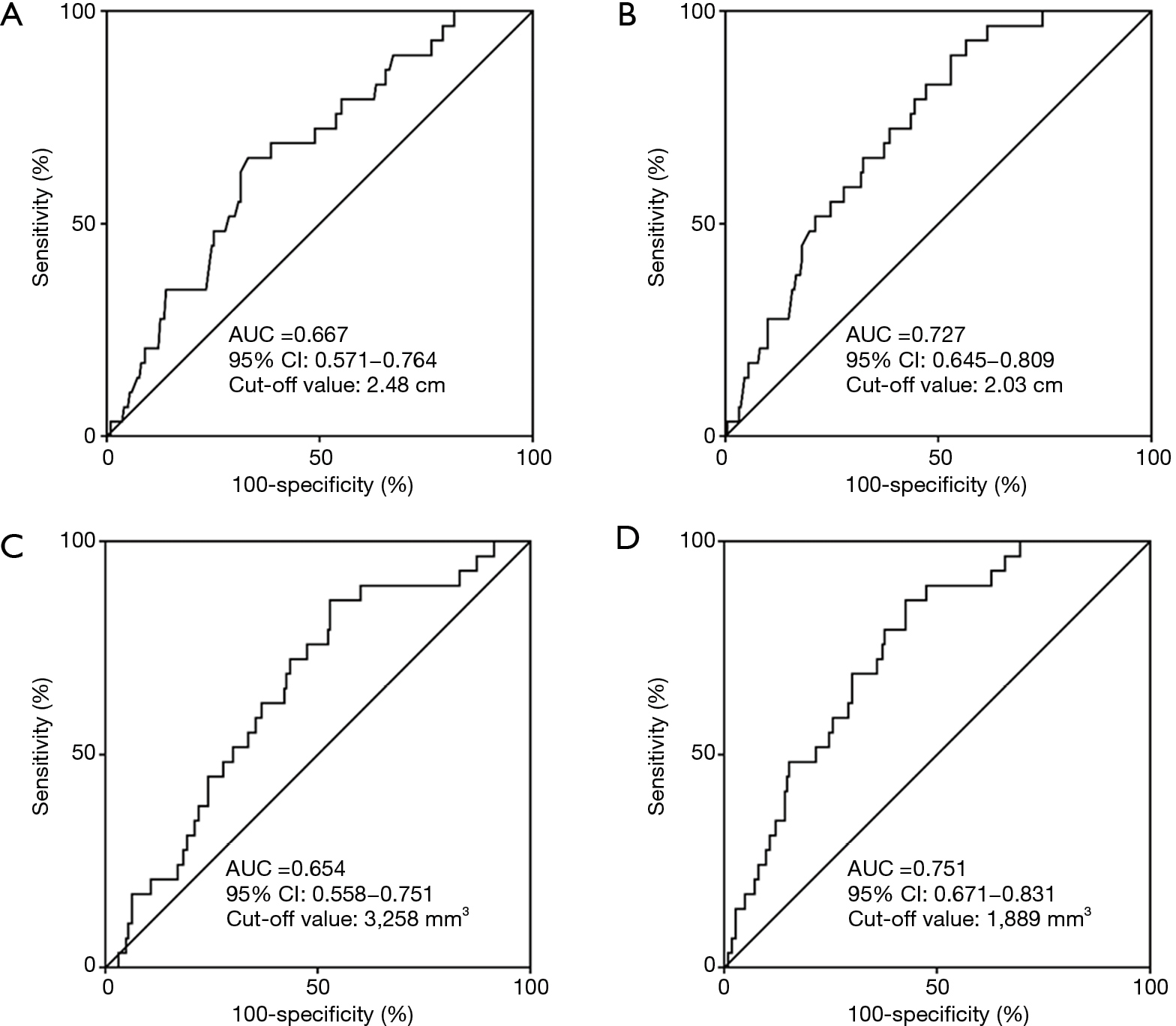 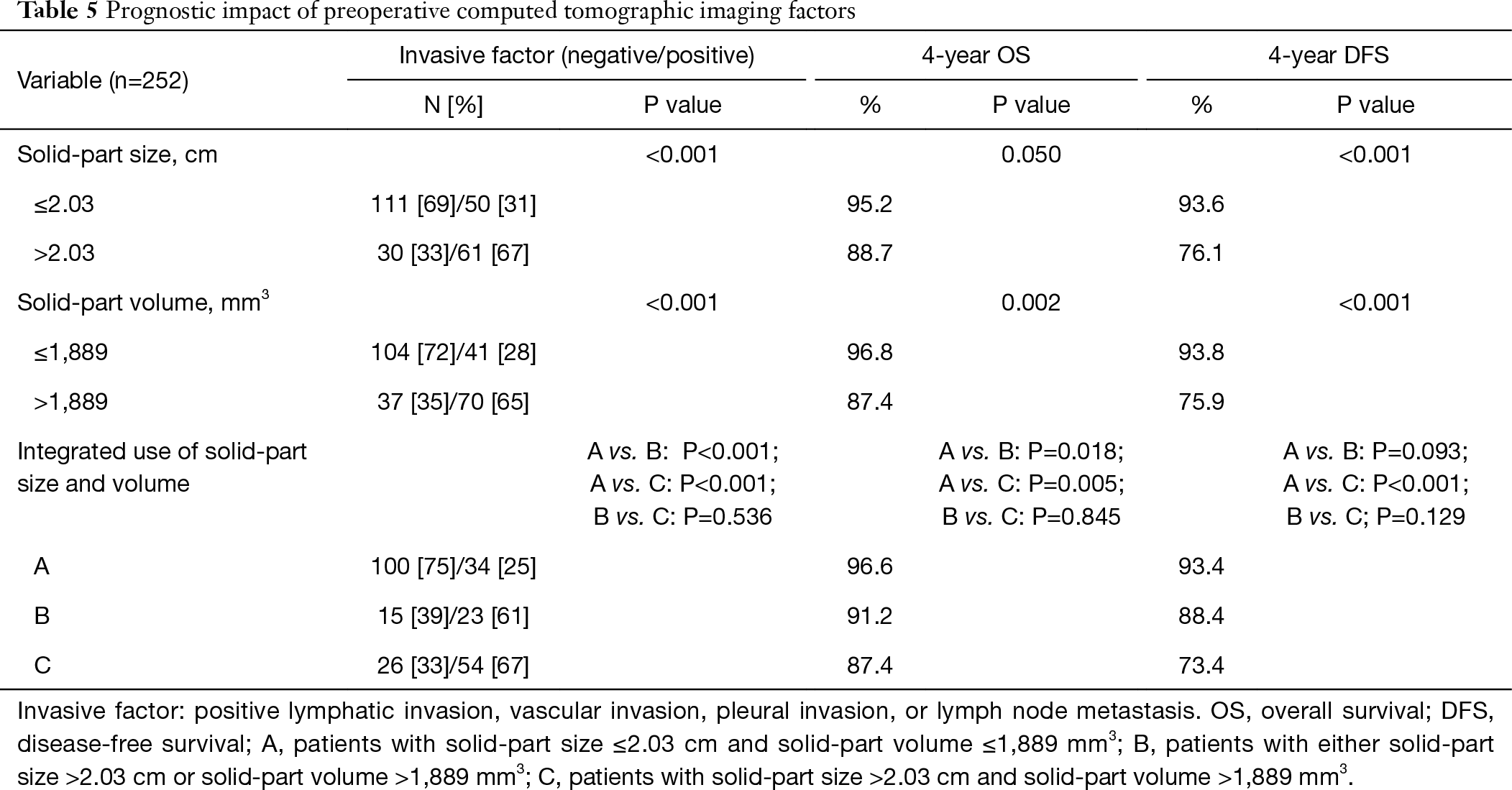 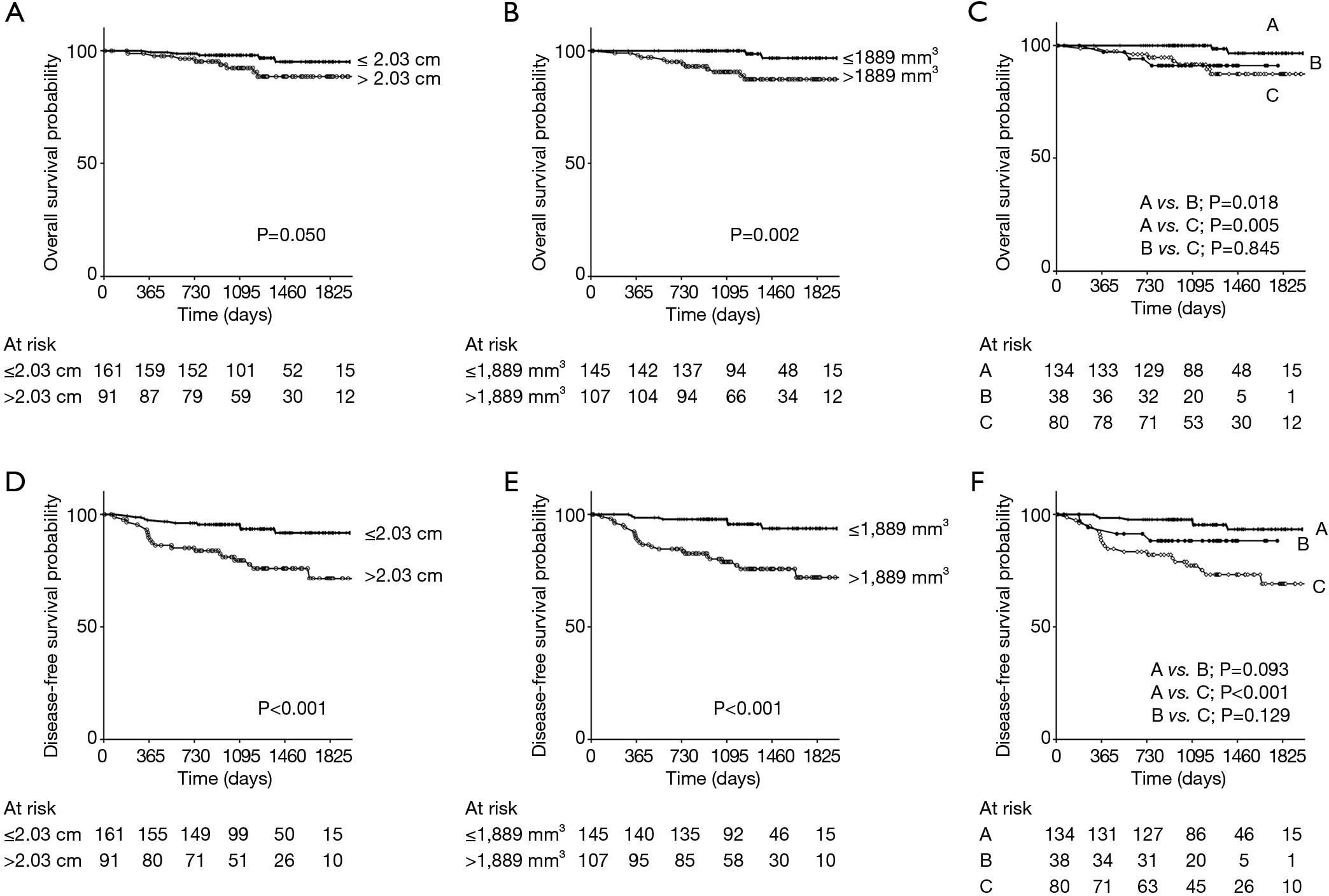 The ability to preoperatively estimate survival outcomes and the presence of prognostic pathological factors on imaging modalities is crucial to the determination of the appropriate treatment strategy. Lymphatic invasion and blood vessel invasion in patients with NSCLC have been reported to be a strong independent predictor for recurrence (13-16). Preoperative prediction of pathological invasive factors in the current study including lymphatic invasion, blood vessel invasion, pleural invasion, and lymph node metastasis is of importance to select appropriate surgical procedures since all these factors are responsible for increased recurrence rate and unfavorable prognosis (12-17). A greater number of studies have shown a careful observation of HRCT-based features such as the calculation of consolidation to tumor ratio of lung cancer, and paying attention to the solid-part size of small peripheral lung cancer helps in predicting prognosis and pathological malignancy (2-4,18-20). At present, conducting HRCT before any treatment to evaluate small peripheral NSCLC is mandatory as the maximum diameter of the solid-part serves as a determinant for the latest TNM classification. Although those parameters are very important, it is occasionally difficult to even judge whether the lesion of interest is a predominantly solid or non-solid-predominant tumor because of the irregularity of the solid-part shape.

A 3D virtual lung surgery planning workstation provides surgeons with an effective tool for safe and rational surgery (7-9). In terms of its extensive role, 3D-VRT provides not only visual information for surgical simulations but also quantitative information such as the volume of the lungs and tumor. Takenaka et al. reported that the solid-part volume as quantified by the Synapse Vincent system was a prominent predictive factor for DFS compared with the whole tumor volume or solid-part size on HRCT (21). Comparative analysis of interobserver reproducibility of solid-tumor size and volume (Table 2) revealed that the workstation semiautomatically provided reproducible and consistent volumetric information of the tumor of interest with ICC of 0.977. Even though the volumetric quantification of a tumor by 3D-VRT is time consuming in contrast to tumor size measurements on conventional axial CT slices, the measurement of solid-part volume for estimating prognostic outcomes such as OS, DFS, and pathological invasive factors supports the successful planning of an appropriate surgical strategy and can contribute to individualized surgical approach including the indication of limited resection for stage I NSCLC. Since there was a strong correlation between solid-part size and solid-part volume in the current study (Figure 2), solid-part size and solid-part volume resulted in the confounding factors one another. That could be the reason why solid-part size was not independent predictive factors for OS and DFS on our multivariate analyses. The measurement of solid-part size on HRCT is supposed to be fundamental to determine T factor, and simpler and easier method to predict postoperative survival and recurrence. On the contrary, although surgical simulations by 3D-VRT offer us to do better surgical planning and more deeply understand lung cancer pathobiology, this process can be time- and cost-intensive compared with the conducting HRCT alone. Therefore, the proposed application of this data to clinical scenarios of early-staged lung cancer unless 3D-VRT can be performed routinely would be to add volumetric quantification of lung tumor for a tailored surgical approach when the shape of the solid-part in greatest dimension on HRCT is too irregular and heterogenous to measure in consensus.

The limitations of this study are its retrospective nature and potential bias. The cut-off values of the ROC curves that dichotomized the two groups could be an arbitrarily value and not available universally. We measured tumor volume by initially connecting the end-to-end dimensions of a tumor with a straight line in an axial plane on the workstation, which was similar to the methodology on HRCT. However, once we delineate the end-to-end line, whole tumor volume, solid-part volume, and non-solid-part volume were separately generated semiautomatically with excellent interobserver agreement.

The authors are indebted to the medical editors of the Department of International Medical Communications of Tokyo Medical University for editing the English manuscript. We also thank Ms. Mami Murakami for helping with the statistical analyses of this work.

Ethics Statement: This study was approved by the Institutional Ethics Board of Tokyo Medical University (No. 3907).