Full expansion of remaining lung tissue is the most important issue following a pulmonary lobectomy, for which chest tubes are used for proper drainage of both air and fluid, with the outflow considered to reflect the condition of the thoracic cavity after surgery (1,2). Postoperative management of chest tubes is largely based on protocols developed by individual institutions or surgeons. In a collaborative study presented in 2011, the European Society of Thoracic Surgeons (ESTS), American Association for Thoracic Surgery (AATS), Society of Thoracic Surgeons (STS), and General Thoracic Surgery Club (GTSC) proposed standardized definitions and nomenclature for chest tube management (3). In addition, the Society for Translational Medicine and The Chinese Society for Thoracic and Cardiovascular Surgery have also produced recommendations for postoperative management of chest tubes in patients who underwent a pulmonary lobectomy according to a systematic review of literature (2). These proposals have been helpful for decision making regarding clinical management of patients who undergo a pulmonary resection. In addition, in the present report we propose additional recommendations for chest tube drainage after a pulmonary lobectomy based on our experience as well as a review of relevant studies.

Immediately following lung resection, air tends to collect in the retrosternal part of the chest wall (supine position) and fluid in the lower part (costodiaphragmatic sinus). Thus, several current general thoracic surgery textbooks recommend placement of 2 chest tubes after a major pulmonary resection procedure, one in an anterior position to remove air, and the other in the posterior and basilar region to drain fluid (4). On the other hand, recent studies have found that use of a single chest tube is effective for lung expansion and reducing postoperative pain, resulting in adequate respiratory physiotherapy and decreasing the risk of possible respiratory complications (5,6). As a result, the general protocol used by many thoracic surgeons includes placement of only one chest tube after a pulmonary lobectomy, as the attending surgeon has direct knowledge of which part of the thoracic cavity requires drainage after that procedure. At our institution, we routinely place a single chest tube after a pulmonary lobectomy according to the following protocol. Following an upper or middle lobectomy, we place the chest tube in the upper area of the thoracic cavity, while we place that in the lower area for both air and fluid drainage following a lower lobectomy. In patients with massive air leakage, pleural effusion, or hemorrhage, two chest tubes are routinely used.

Conventional chest tubes are made of plastic or silastic materials, and are straight with an end hole and series of side holes. Since the length of the tube to the side holes is the effective drainage length, surgeons often fashion additional side holes manually according to the adequate drainage point. Size varies according to the manufacturer and surgeons determine which is best depending on the situation of the individual case after a pulmonary resection. For example, following dissection of a severe adhesion in the lung, a thick drain is preferred for adequate drainage of effusion and hemorrhage.

Blake drains are a round type of flexible silicone tube that have been reported to be as effective as traditional chest tubes for thoracic drainage (1,7). They are equipped with grooves that run along the tube length and the fluted design is considered suitable to promote fluid drainage (8). Since a Blake drain exerts constant suction over the entire length of the fluted portion, both air and fluid can be evacuated. Air is drained mostly using the proximal site of the fluted portion of the drain, thus we prefer to insert the drain at the 7th intercostal middle axillary line descending into the dorsal region via the anterior apical portion of the lung after an upper or middle lobectomy, or ascending into the visceral region via the posterior portion of the lung following a lower lobectomy (Figure 1). 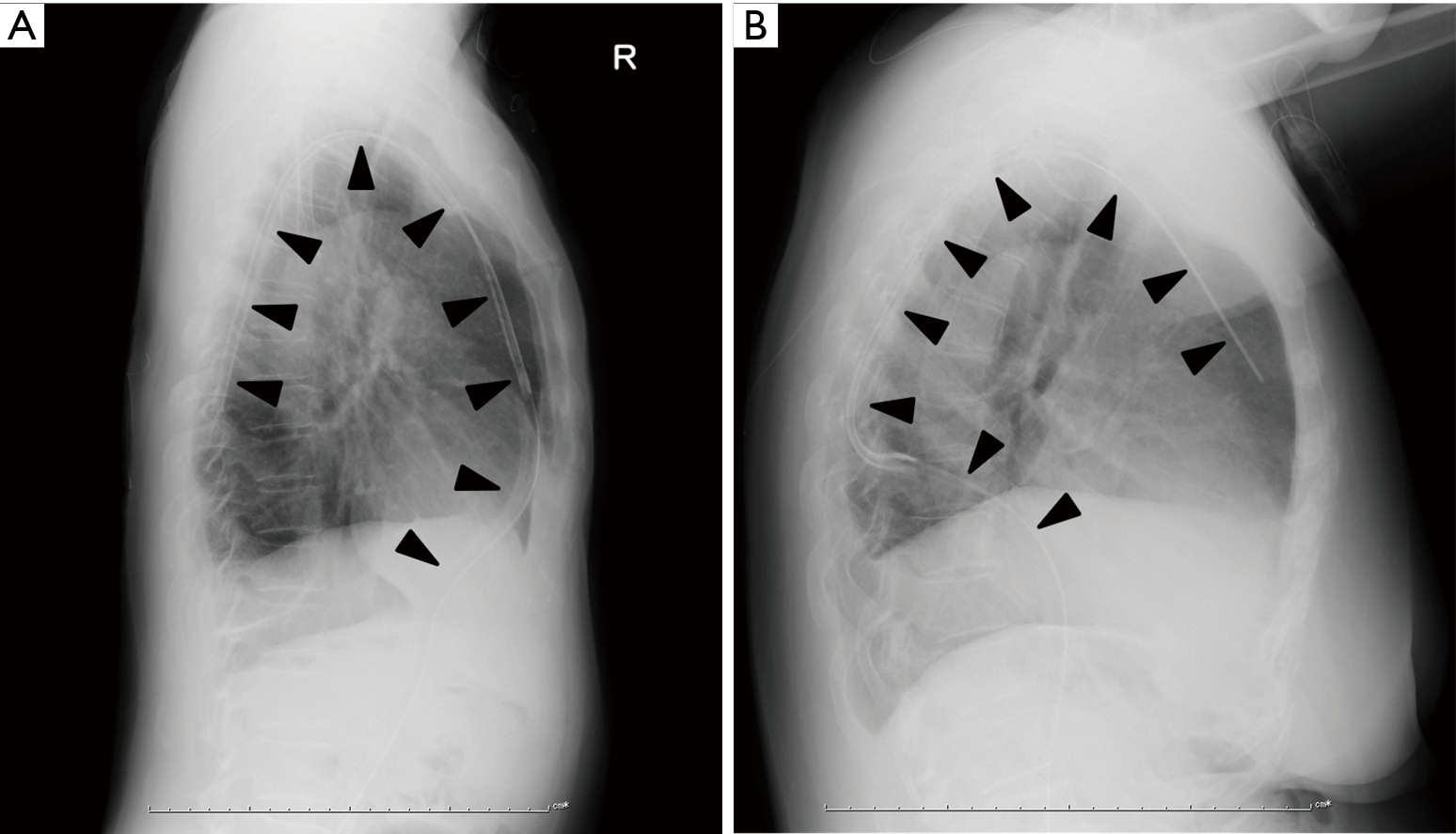 One of the most common causes of complications after a pulmonary resection is prolonged air leakage (9,10). Management of a pulmonary air leak is an important clinical issue for thoracic surgeons (11), as it often leads to increased complications, including longer drainage time, infection, and empyema when prolonged, resulting in an extended hospitalization (12).

The effectiveness of a test tube with or without suction is controversial in regard to reducing the duration of air leakage, and the choice is generally left up to the attending surgeon (13). A tube with suction provides external suction, while no suction indicates a water seal. Several studies have reported that external suction offers no advantage for patients who have undergone a lobectomy (14), thus it is common practice to first directly apply external suction to chest tubes following a pulmonary resection to enhance pleural apposition and then switch to a water seal as soon as possible.

A digital pleural drainage system can be used to maintain a preset intrathoracic pressure, termed regulated pressure, and is associated with significant reductions in air leak duration, chest tube placement duration, and post-operative hospitalization (14,15). On the other hand, using findings from a prospective randomized trial conducted to evaluate the effectiveness of a digital thoracic drainage system, Takamochi et al. concluded that use of a such a system did not shorten the duration of chest tube placement as compared to a traditional thoracic drainage system following anatomic lung resection procedures (16). On the other hand, a digital pleural drainage system can provide information regarding the amount of air being leaked, as well as monitoring of peak air leakage and leakage patterns, which are useful for predicting the period of treatment and related decision making after a pulmonary resection (17,18).

The most common complication of chest tube removal is lung collapse and whether to clamp a chest tube prior to removal remains a controversial issue. Although several studies have reported no benefit of chest tube clamping prior to removal (19), many physicians prefer to clamp the chest tube for detecting the presence of a small amount of air leakage. In studies that utilized a digital thoracic drainage system, several threshold conditions for chest tube removal have been proposed, such as air leak <20 mL/minute (9), or <40 mL/minute for 6 hours (20) or <30 mL/minute for >8 hours (21). These criteria might depend on physician experience. Nevertheless, since a digital thoracic drainage system shows air leakage trend, a clamp test is considered to be unnecessary.

In patients without air leakage or bloody, chylous, or purulent pleural effusion, chest tube removal depends on drainage volume over a period of 24 hours, though the threshold for a safe volume indicating chest tube removal after a pulmonary lobectomy remains controversial. Many thoracic surgeons use the threshold of 100–250 mL/day for indicating such removal, though several authors have reported that a chest tube can be removed safely when the daily pleural fluid amount is up to 450 mL, and without hematic or chylous contents (2). Nakanishi et al. also evaluated appropriate drainage volume for indicating chest tube removal, and concluded that early removal of a chest tube on the day after a thoracoscopic lobectomy regardless of drainage volume appears to be safe in patients without air leakage or bloody, chylous, or purulent pleural effusion (22). In other studies, Ueda et al. (23) and Murakami et al. (24) investigated omission of postoperative chest tube drainage in selected patients undergoing lung resection. They carefully assessed air leaks until removal of the tracheal tube and then removed the chest tube in the operating room if none were detected. Each study concluded that omission of chest tube drainage is feasible in the majority of patients undergoing thoracoscopic major lung resection without increasing the risk of adverse events.

Introduction of new chest tube types and drainage systems has made innovative contributions to thoracic surgery. It is important for surgeons to remain abreast of current knowledge regarding postoperative chest tube management in their patients following a pulmonary resection procedure.