How to prevent adverse events of vascular stapling in thoracic surgery: recommendations based on a clinical and experimental study

Video-assisted thoracic surgery (VATS) is becoming increasingly popular because of advancements in surgical devices and techniques; it enables postoperative pain reduction and quicker functional and social recovery than conventional thoracotomy (1-4). The use of mechanical staplers for pulmonary vessels and bronchi can contribute to safer and simpler operative procedures in VATS.

Staplers have been used in thoracoscopy since the 1990s, initially for the lung parenchyma or tissue and bronchi and gradually for blood vessels (5,6). As staplers improved, procedures using staplers are regarded safe and is now widely used for thoracic surgery (7,8). However, occasionally, adverse events (AEs) of vascular stapling such as oozing and rupture of the vessel stumps occur (9-12). Given the nature of the vascular anatomy and physiology of the chest, combined with high blood flow in a low-pressure system, unexpected injury can lead to fatal hemorrhage within moments (13). Since reducing such AEs as much as possible leads to an improvement in the quality of surgery, we consider that improvement of the procedure is also important from this point of view. Although a few reports have mentioned stapling (7), to our knowledge, no report has described the association between vessel stress due to mechanical staplers and endurance of vessel stumps. In this study, we conducted a durability test for vessel stumps using an animal model to investigate the association between vessel stress caused by staplers and stump endurance. Then, we examined the clinical outcomes of staple use in our previous surgical cases.

First, to examine the efficient use of mechanical staplers for pulmonary vessels, an animal experiment using pig-excised cardiopulmonary blocks was conducted. Vessel stump strength was assessed by pressure test and by checking the staple lines for deformation. Second, to verify the results of our experimental model, AEs associated with clinical stapler use for pulmonary vessels were explored by studying clinical videos retrospectively. This study was approved by the Institutional Review Board of Kobe University, and written informed consent was obtained from each participant (approval no. 180062).

The left pulmonary arteries were used from the excised cardiopulmonary blocks of pigs. The arterial branch diameter was measured before firing; branches with ≥5 mm diameter were selected for the pressure test. The type of stapler used for our experiment was the Powered Echelon flex seven with a white cartridge (35-mm staple leg length) produced by Ethicon Endo-Surgery (Cincinnati, OH, USA).

During surgery, twisting and lifting were assumed as possible situations causing vascular dissection. Comparisons were made under the following four conditions as the stress applied to the vessel on firing of mechanical staplers: Group A, no strain; Group B, only lifting (Figure 1A); Group C, only twisting (Figure 1B); and Group D, lifting and twisting (Figure 1C).

Figure 1 Stress to the vessels on firing. (A) Lifting; (B) twisting; (C) lifting and twisting.

After vessel stapling, a pressure test was conducted to examine stump endurance. The pulmonary artery (PA) was cut from the cardiopulmonary blocks at the base of the main trunk, and the central side of the PA trunk was tied to the cannula with a pressure meter. The PA was filled with red-colored normal saline solution using syringe. The pressure was measured at the point of fluid leakage from the stumps (5). The pressure in the system was also monitored visually and recorded with more than two doctors to ensure accurate readings. After the pressure test, the staple line was inspected for deformation, and the number of deformed staples was compared in each group.

Between January 2016 and December 2017, 263 patients underwent thoracoscopic anatomical lung resection in our institution. Surgical video was taken for recording purposes in all cases, and video reviews were performed for all patients to reveal the possible cause for AEs. Stump rupture, technical vascular injury, and oozing that needed hemostasis agents, such as fibrin sealant patch or direct suturing, were defined as AEs concerning intraoperative stapling. Oozing was defined as small bleeding from the stumps or points of the staples, and technical vascular injury was defined as bleeding that occurred before the stapling process due to technical failure. Details of bleeding situation were confirmed by surgical video, and patient characteristics between those with and without AEs were compared.

The maximum pressure of the stump in each group was compared using the Tukey-Kramer test. Patient characteristics were analyzed using Student’s t-test for continuous variables and χ2 test for categorical data. All analyses used JMP 8.0 software (SAS Inc., Cary, NC, USA). A P value less than 0.05 was considered statistically significant. 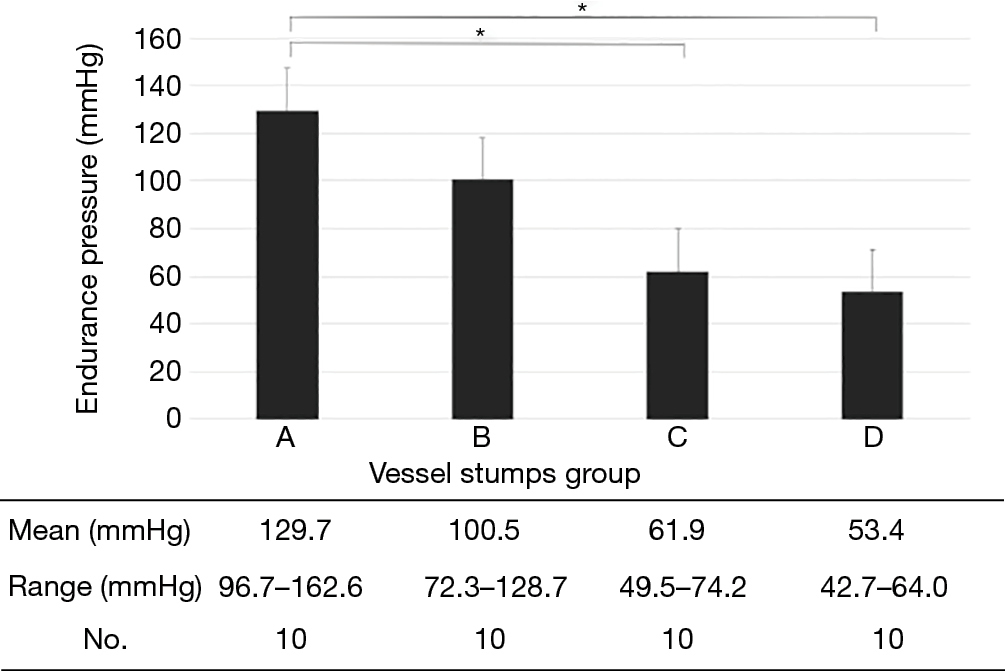 Figure 2 Pressure resistance of the vessel stumps in each group. The pressure was significantly lower in the twisted group (C,D) than in the no strain group (A) (*P<0.01). 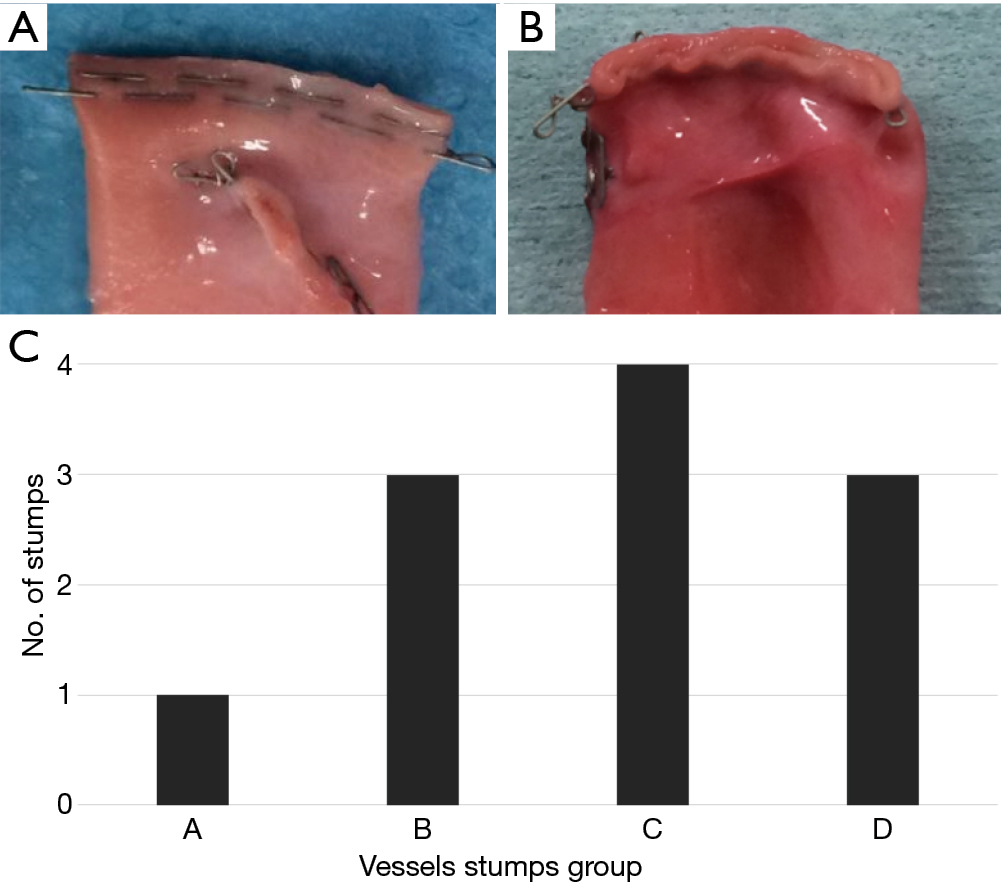 Figure 3 Shape of the staple lines. They were evaluated macroscopically and categorized into two groups. (A) Optimally formed; (B) deformed; (C) number of the deformed staple lines in each group.

All staplers used in this study were manufactured by Covidien (Mansfield, MA, USA) or Ethicon Endo-Surgery (Cincinnati, OH, USA). A total of 754 staplers were used for pulmonary vessels, and nine AEs (1.19%) were judged to be related to stapling (Table 1). All AEs were oozing of PA, there was no fatal bleeding, including rupture and technical vascular injury, and there were no conversions from VATS to thoracotomy. The estimated factors that cause AEs were vessel stress: 7 twisting and lifting during vascular dissection, 1 hematoma formation on exfoliation, and 1 inapplicable diameter of the vessels. The brand of the mechanical staplers and vessel diameter did not influence the occurrence of AEs, although accurate measurement of vessel diameter was impossible in our clinical study. We examined the patient characteristics of cases with and without AEs, and compared patient’s age, sex, smoking status, presence or absence of diabetes, hypertension, chronic obstructive pulmonary disease, but no difference was found between the two groups (Table 2). 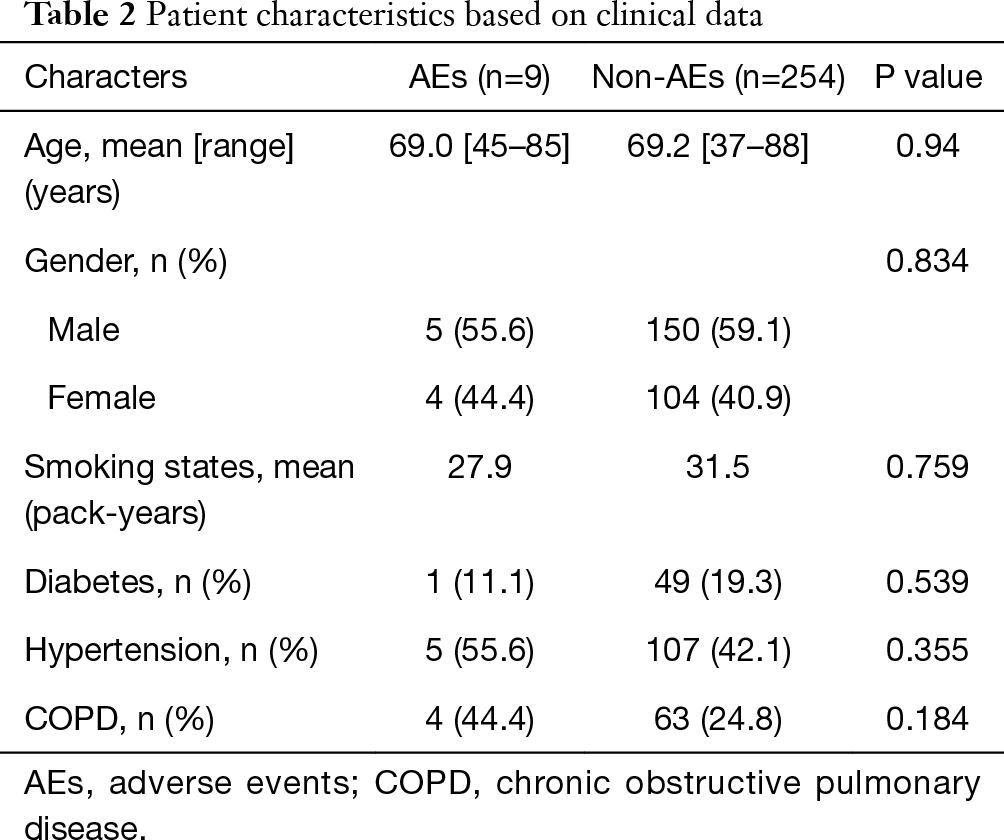 The safety of VATS has been discussed since the 1990s, which has given rise to numerous considerations. Many reports have demonstrated the efficacy and safety of VATS compared with thoracotomy. Kirby et al. (14) reported a small-scale randomized controlled trial comparing the results of standard thoracotomy lobectomy with VATS lobectomy in clinical stage I non-small cell lung cancer. There was no difference between the two groups in terms of surgical results, such as surgery time, bleeding volume, and 5-year survival rate. Paul et al. (15) reported a comparison of VATS and open thoracotomy based on the Society of Thoracic Surgeons (STS) database as a multicenter analysis; no difference was found in the mortality rate, and the incidence of complications was significantly lower with VATS. There are several reports on the low perioperative complication rate of VATS (16-18), and VATS is now recognized as safe as thoracotomy and is less invasive.

AEs related to mechanical stapler use are occasionally reported and can be a serious situation. Asamura et al. (8) reported stapling failure in 1 of 842 mechanical stapler divisions (0.1%), and the reason for the failure was misalignment of a cartridge. Szwerc et al. (10) reported 7 vascular complications in a total of 2,548 vascular staplings, which included 5 minor intimal fractures, 1 posterior segmental arterial avulsion, and 1 staple misfiring, with an AE rate during stapler application of 0.27%. They considered that all injuries were related to excessive traction placed on PA branches when inserting or firing the stapler. Yano et al. (9) reported AEs of pulmonary vascular stapling in a multi-institutional retrospective study and analyzed the details of AEs. Nine AEs were judged to be related to stapling in 3,393 vascular staplings (0.27%), and AEs in the PA were seen more frequently than those in the pulmonary vein for intraoperative stapling.

To prevent such AEs, the vessel should be closed at an untensioned angle, but there is no report on the association between vessel stress due to staplers and stump endurance. In our experimental model, decreased stump durability and many deformed staples were observed in the PAs that were cut under stress conditions, especially twisting. Under stress conditions such as twisting and lifting, curvature occurs in the shape of the staple line, and the stumps tend to break down easily. Of course, the normal value of PA pressure is 15–30 mmHg, and high pressure, as in the experiment, does not actually occur.

However, some reports showed that the rupture of pulmonary vessels occurred in clinical situation (9) have been caused by the stress to the vessels at firing. We believe that stabilization of the blood vessel stump is necessary because unexpected external forces could act on the staple line during or after operation.

When examining clinical videos of our series, the frequency of AE was 1.19% (8-10), which was higher than that seen in a previous report. This seems to be due to the inclusion of quite minute bleeding. All AEs were oozing from the PA, and we did not encounter severe events like rupture and stapling failure. Regarding the stress to the blood vessel in 7 cases, twisting was observed in 4 cases, lifting in 2 cases, and twisting and lifting in 1 case. Even in clinical use, the durability of the stump was decreased in cases where twisting was applied; this supports the findings in the animal experiment.

In clinical situations, it is sometimes impossible to insert a stapler at a good angle because the thoracic shape, chest wall thickness, and intercostal space width vary from patient to patient. Therefore, traction or twisting of the vessels is often needed to obtain an optimal surgical view when the stapler approaches the vessels. Even when stress due to traction is unavoidable, it is important to reduce the stress to the vessels, at least on firing. Although VATS with a small number of ports is possible, 4-port VATS was performed in our institution because we believe that the angle of which the stapler approaches the vessels is important. To avoid AEs, we definitely avoided twisting even if pulling is permitted, and we are willing to add ports when strong tension is likely to occur.

The present study was limited due to the use of pig-excised cardiopulmonary blocks. It should be done in vivo if possible, but we believed the vessels used in our study could simulate an in vivo situation because we used fresh tissues with sufficient vascular strength and elasticity. It is more difficult to examine human living lungs, but some clinical prospects were obtained through examination of clinical videos. Another limitation includes the small number of samples. Additional studies are needed to determine the clinical relevance of our findings.

In conclusion, the stress of the pulmonary vessels such as twisting and lifting decreased the durability of the stumps. Although there is a restriction in the approach of the automatic suturing device for vessels, reduction of stress on vessels by firing as little as possible will enable safer surgeries.

Ethical Statement: This study was approved by the Institutional Review Board of Kobe University, and written informed consent was obtained from each participant (approval no. 180062).