Fluid resuscitation to increase intravascular volume is a common and crucial part of patient management in the intensive care unit (ICU) and surgical ICU (1). Fluid management is especially critical after cardiac surgery in order to maintain adequate preload and cardiac output. The literature recommends use of crystalloid solution for this purpose (2,3), with normal saline being most commonly used (4,5). Recent studies, however, have raised concern that excessive use of normal saline may induce hyperchloremic acidosis and subsequent acute kidney injury (AKI) (6-10). As an alternative to normal saline, balanced solutions have become widely used in order to better preserve renal function in ICU settings. For instance, the British Consensus Guidelines on intravenous fluid therapy for adult surgical patients recommend that balanced salt solutions should replace 0.9% saline when crystalloid resuscitation is indicated, to reduce the risk of hyperchloremic acidosis (11). However, there is insufficient evidence regarding the applicability of intravenous fluid therapy in cardiac surgical patients, who may be particularly vulnerable to AKI following cardiopulmonary bypass (CPB) (12). Therefore, we compared the effects of high- and low-volume saline administration on postoperative renal function in patients who underwent cardiac surgery with CPB.

From January 2014 to December 2015, 2,845 consecutive adult patients were admitted to the ICU following cardiac surgery at Asan Medical Center in Seoul, Korea. Of these, we excluded patients who underwent cardiac surgery without CPB support, those who underwent heart transplantation, and those who preoperatively received renal replacement therapy (RRT). Finally, 1,740 consecutive patients were enrolled, and their medical records were retrospectively reviewed. The study flow chart is shown in Figure 1. This study was approved and informed consent was waived by the Institutional Review Board (IRB) of our institution due to its retrospective nature (IRB number: 2016-0481).

In the operating room, balanced buffered solution (Plasma Solution A, chloride concentration 98 mmol/L; CJ Healthcare, Seoul, Korea) was used as the priming solution for all CPB and for any additional volume requirements during CPB. Mean blood pressure was maintained at around 60 mmHg during CPB. Upon CPB cessation, fluid was administered to obtain proper hemodynamic stability based on volume status on transesophageal echocardiography. After discontinuation of CPB, a renal protective fluid strategy consisting of balanced crystalloid solution and a limited amount of hydroxyethyl starch (HES) (Hextend or Volulyte, CJ Healthcare) (13) was performed by an anesthesiologist. Perioperative blood product transfusion and fluid administration were performed according to the protocol of our institution.

The fluid management protocol at our ICU included initial fluid resuscitation using up to 1 L of crystalloid solution. If additional volume was required, additional crystalloid solution was used, provided that the patient was well-oxygenated. Two kinds of crystalloid solution were used: a chloride-rich solution (0.9% saline, chloride concentration 150 mmol/L; JW Pharmaceutical, Seoul, Korea) and a balanced buffered solution (Plasma Solution A; CJ HealthCare). The choice of the crystalloid solution was at the physician’s discretion. If crystalloid infusion was not effective as a volume expander, 6% HES solutions [Hextend 670/0.75, JW Pharmaceutical, or Volulyte (130/0.4), Fresenius Kabi, Bad Homburg, Germany] were used up to 20 mL/kg as a second line of fluid according to the patient’s renal function and coagulation. As a routine practice, albumin was not used as a volume expander in the immediate postoperative period. As the primary interest of our study was to evaluate the effect of high-volume saline administration on AKI following cardiac surgery, the patients were divided into 2 groups, i.e.,—high-volume saline (>1 L) and low-volume saline (≤1 L), according to the amount of saline administered during the first 48 hours after surgery regardless of fluid management strategy.

Statistical analyses were performed using SAS version 9.3 (SAS Institute, Cary, NC, USA). Data are expressed as mean ± SD for continuous variables, and as numbers and percentages for categorical variables. Pre- and post-operative measurements were compared using Student’s t-test or the Mann-Whitney U-test. The chi-square test or Fisher’s exact test was used to compare categorical variables and to assess the statistical significance of differences between the 2 groups. A P value of ≤0.05 was considered statistically significant in all comparisons. Univariable and multivariable analyses were performed for the entire patient cohort by using logistic regression for AKI and Cox proportional hazards model for in-hospital mortality to identify the associations with early adverse outcomes. Variables were included in multivariable analysis if their univariable significance was <0.1. Backward elimination method was used for variable selection.

To reduce the effect of treatment-selection bias and potential confounders in this observational study, we performed rigorous adjustment for significant differences in the baseline patient characteristics using propensity score matching (15,16). A propensity score was generated for each patient from a multivariable logistic regression model based on 15 preoperative characteristic variables in Table 1 [age, sex, diabetes mellitus, hypertension, cerebrovascular accident, EuroSCORE (European System for Cardiac Operative Risk Evaluation), left ventricular ejection fraction, medications, and laboratory findings] as independent variables, with saline group (saline >1 versus ≤1 L) as a binary dependent variable. At most, <3% of values were missing. To create the propensity score, a single imputation using the Monte Carlo method was used to fill out incomplete baseline variables with the assumption that data were missing at random. The discrimination and calibration abilities of each propensity score model were assessed using C and Hosmer-Lemeshow statistics. The low-volume saline group was then matched with the high-volume saline group in a 1:4 (maximum) ratio using a greedy matching algorithm. After matching, we compared the baseline covariates between the 2 groups as the standardized difference of means. In the propensity score-matched cohort, the risk of each outcome was compared using a logistic regression model with generalized estimating equations for AKI, KDIGO, and new RRT, and Cox proportional hazard models with robust standard errors and a sandwich covariance matrix estimation for in-hospital mortality, which accounted for the clustering of matched pairs. Clinically significant perioperative covariates that were not considered in propensity score matching were also adjusted in this analysis. 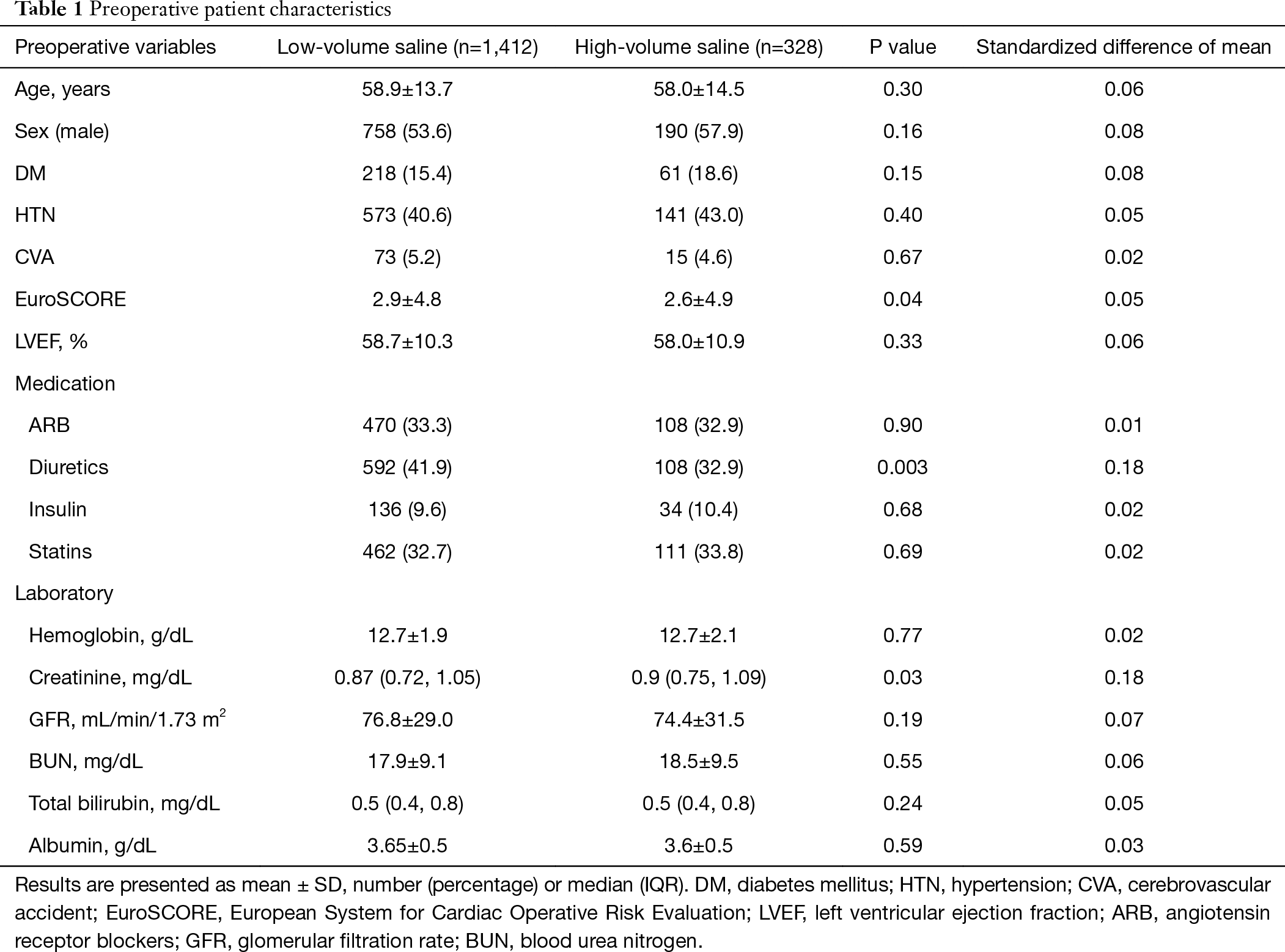 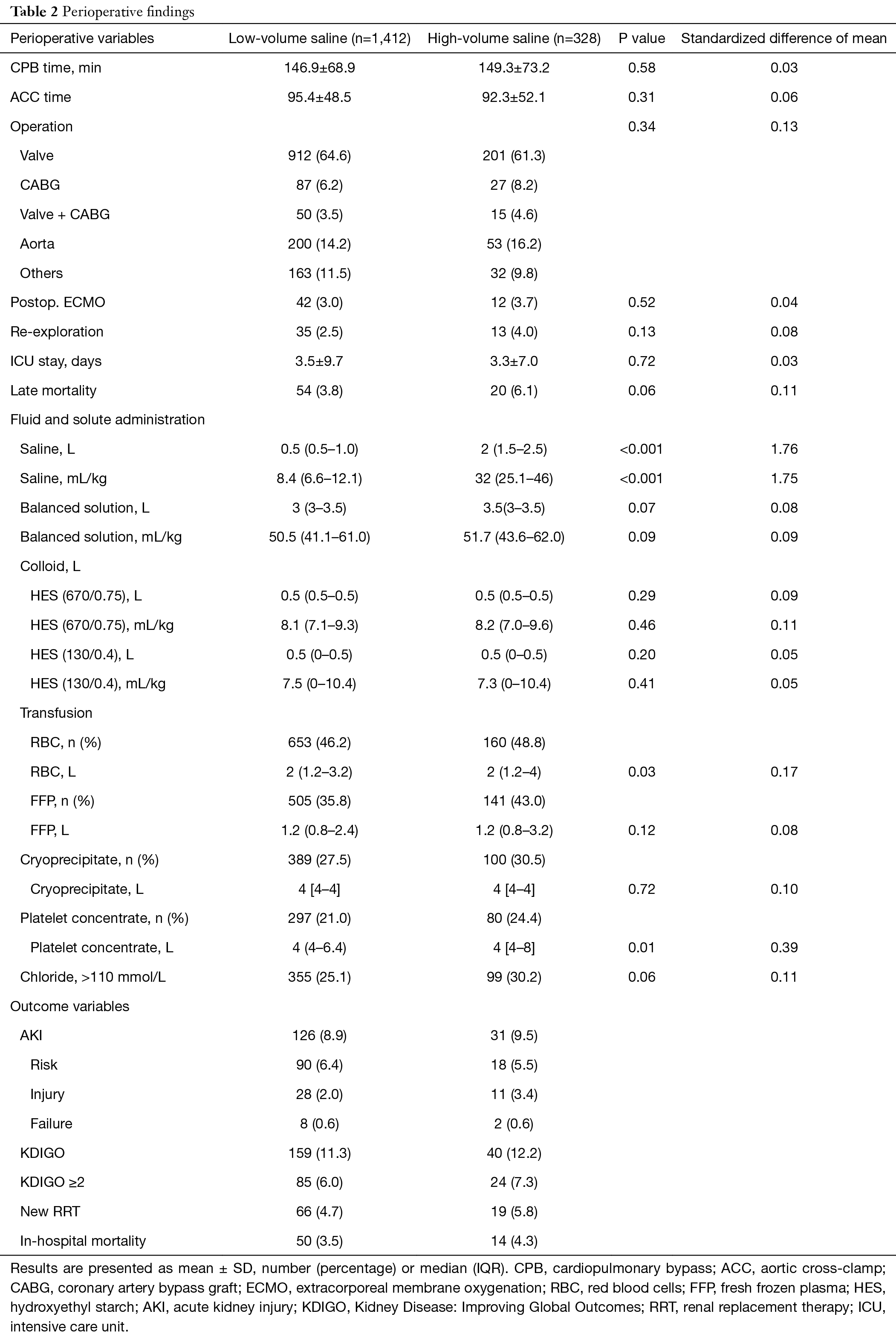 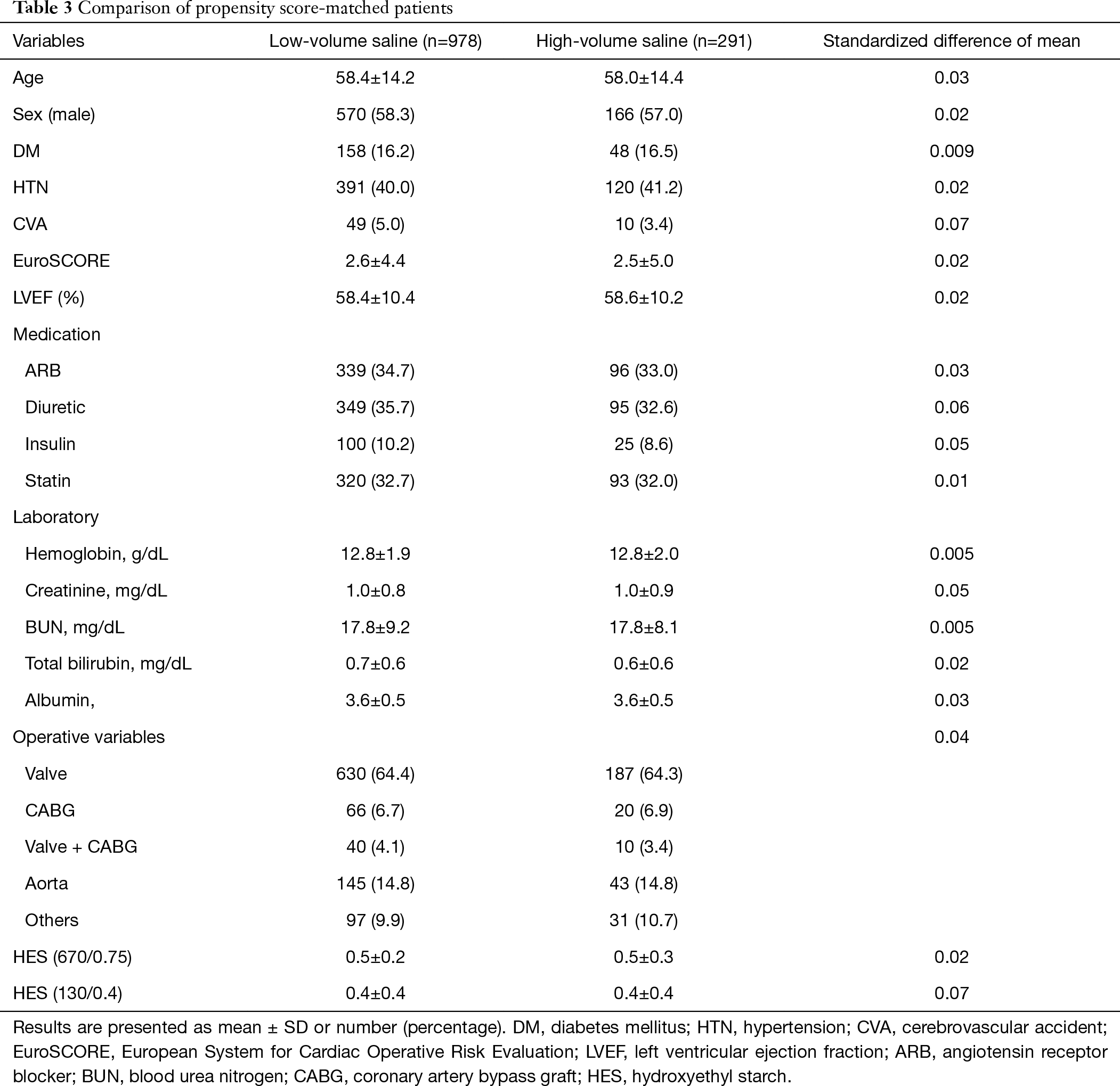 In this propensity score-matched dataset, adjustment was performed for 5 clinically significant covariates, namely, CPB time, use of FFP, cryoprecipitate transfusion, postoperative extracorporeal membrane oxygenation (ECMO), and postoperative bleeding. This analysis also showed that high-volume saline administration did not significantly affect postoperative kidney function or mortality. The analysis of each outcome is summarized in Table 4. 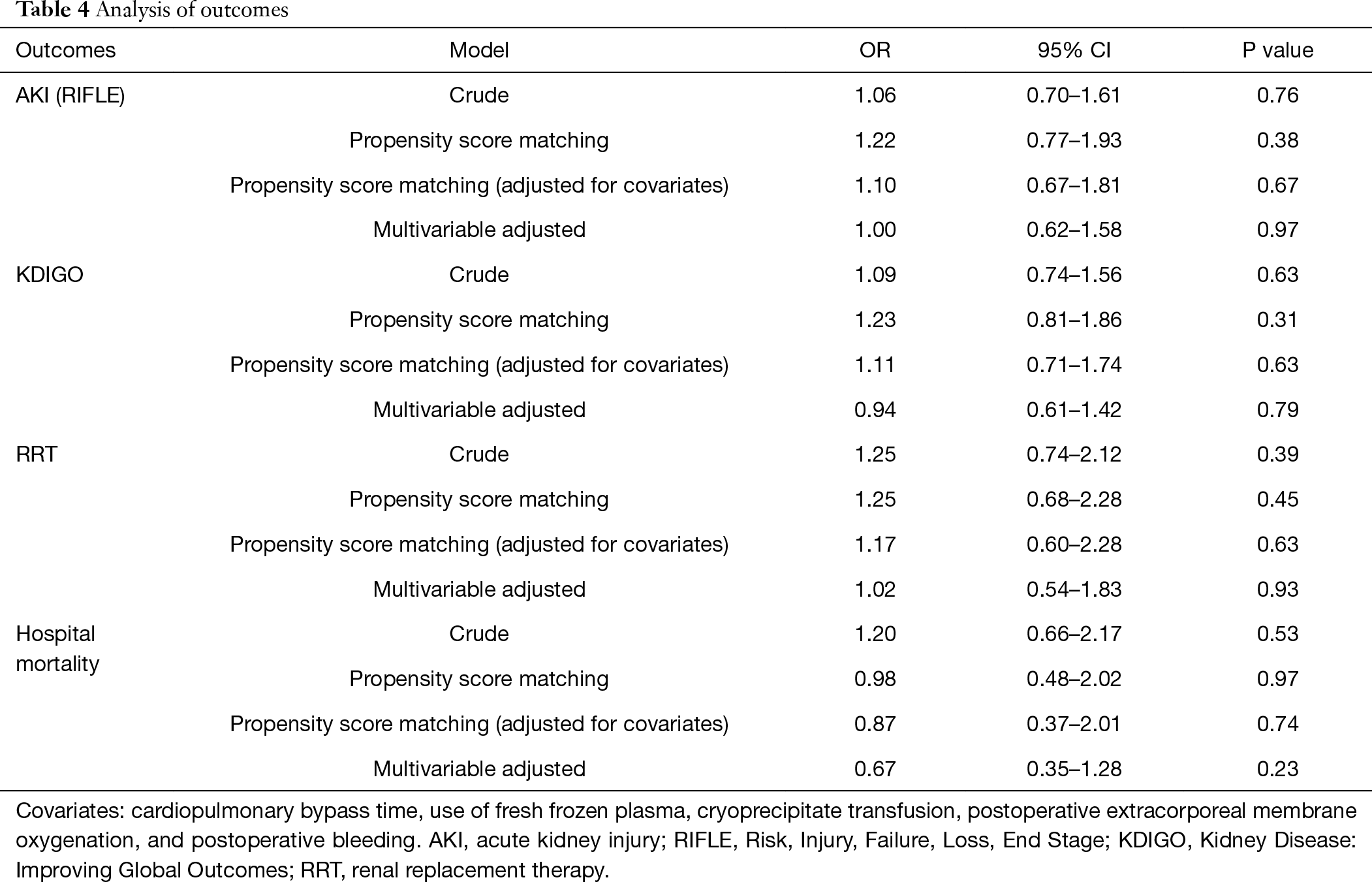 In our study, the patients were divided into 2 groups according to the amount of saline administered during the first 48 hours after surgery and the incidence of postoperative AKI was defined based on the peak serum creatinine level within 2 postoperative days. To overcome the duplication of the duration of saline infused and the peak creatinine obtained for defining AKI, additional validity analyses were done. We evaluated the association between the total amount of saline administered on POD#0 only and we defined AKI according to the peak creatinine level on POD#2. These analyses showed consistent results with our initial data as summarized in Table 5. 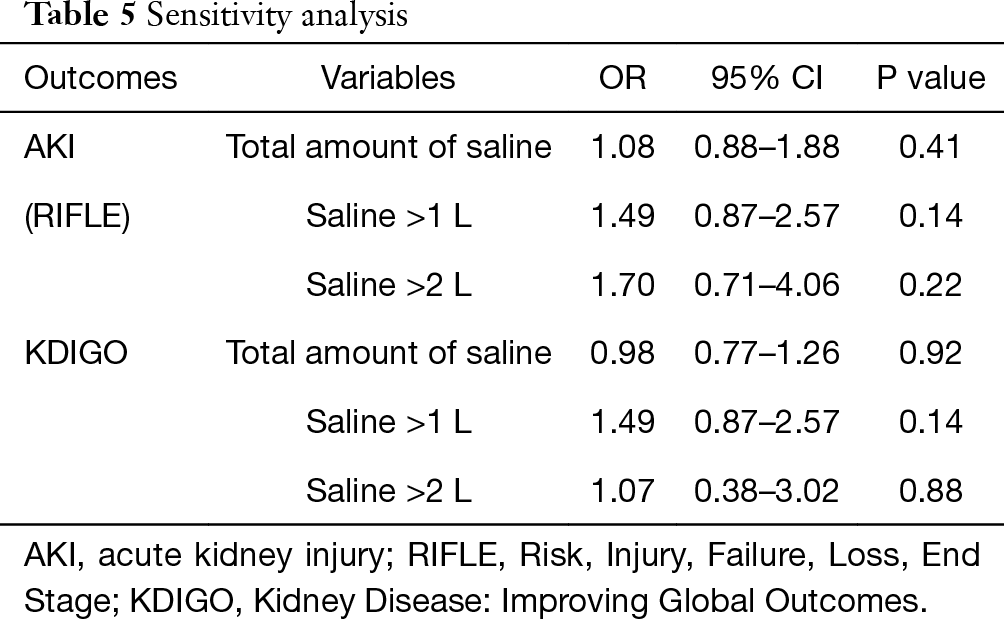 Determinants of AKI and mortality 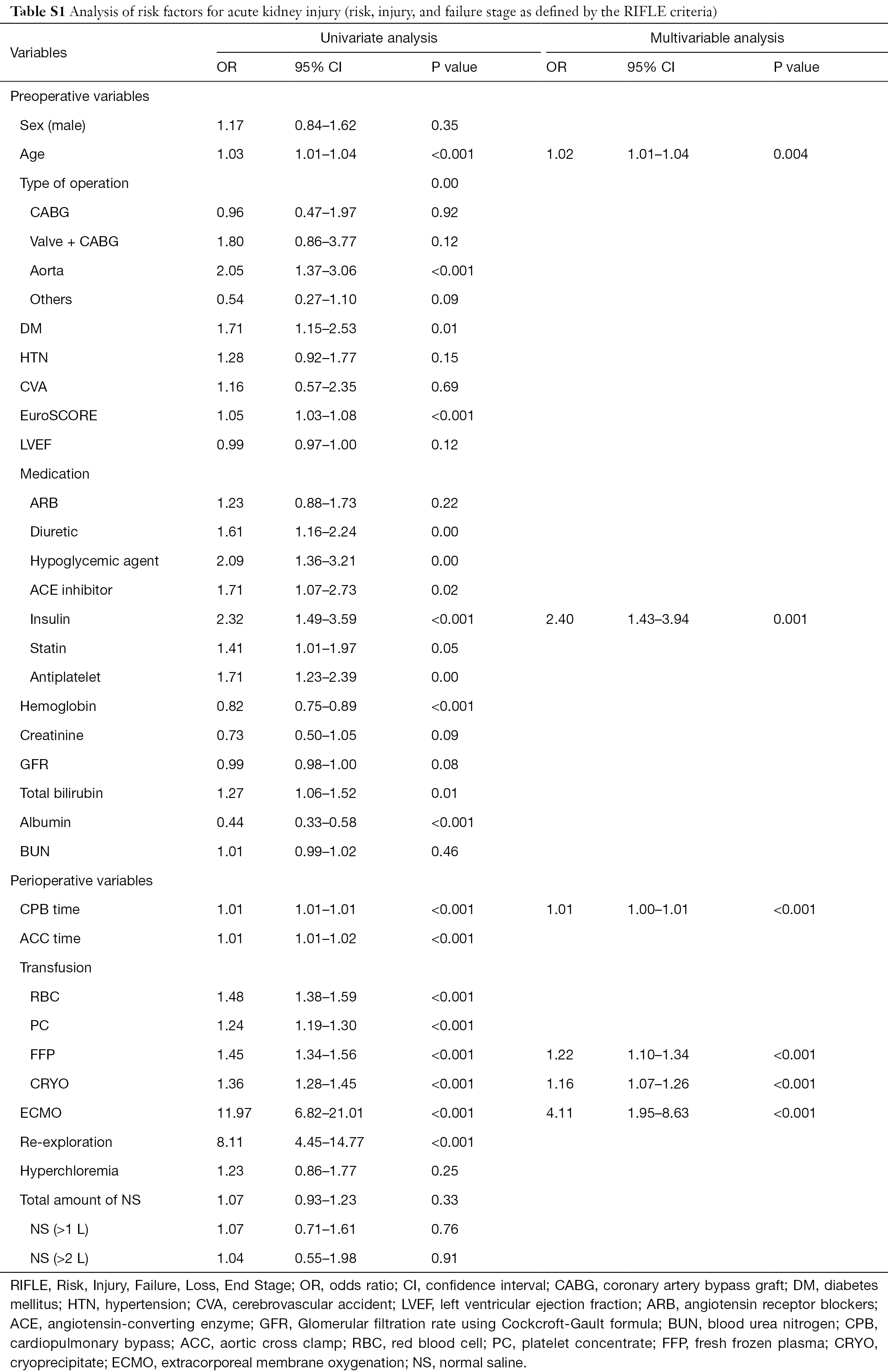 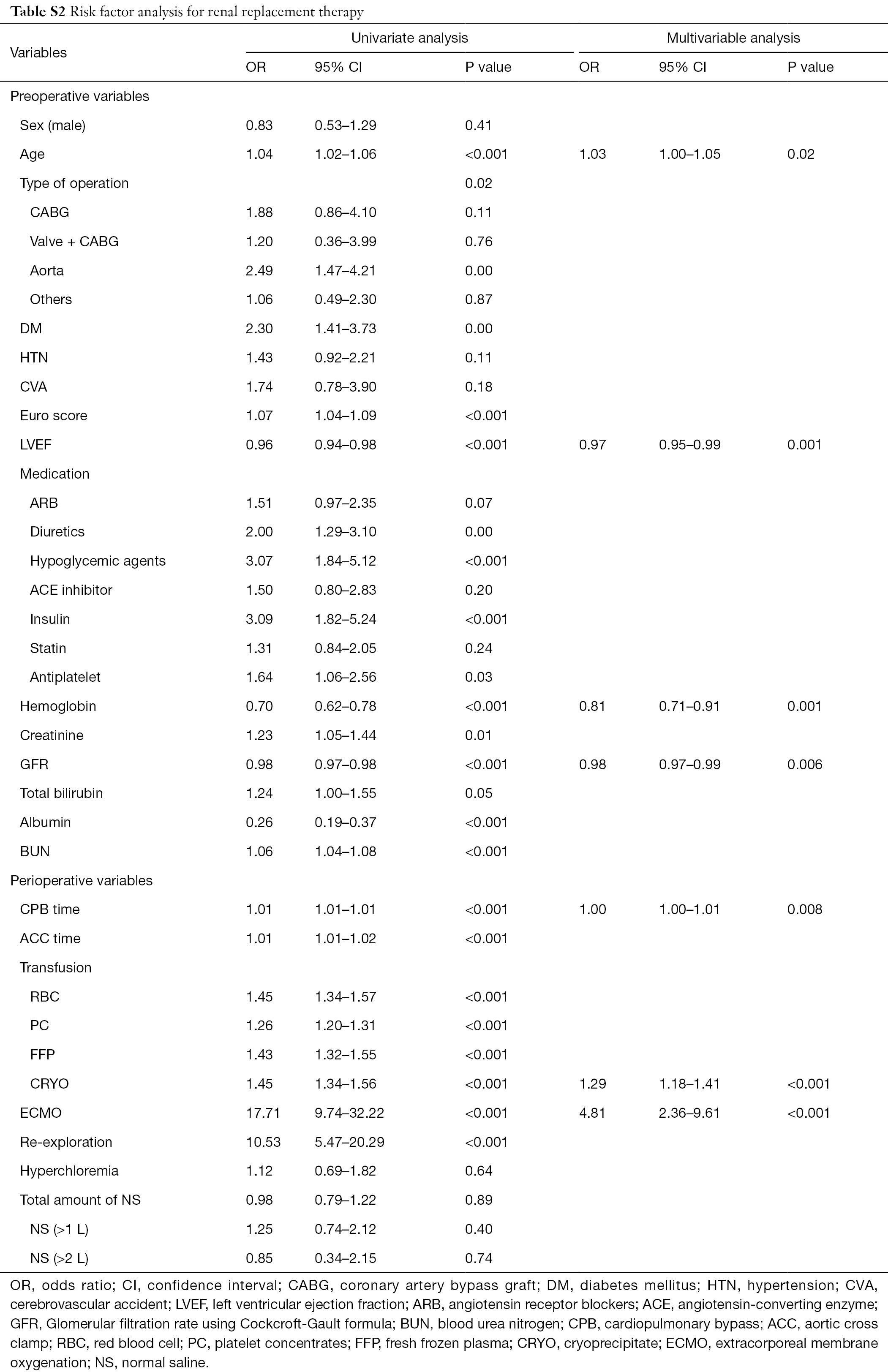 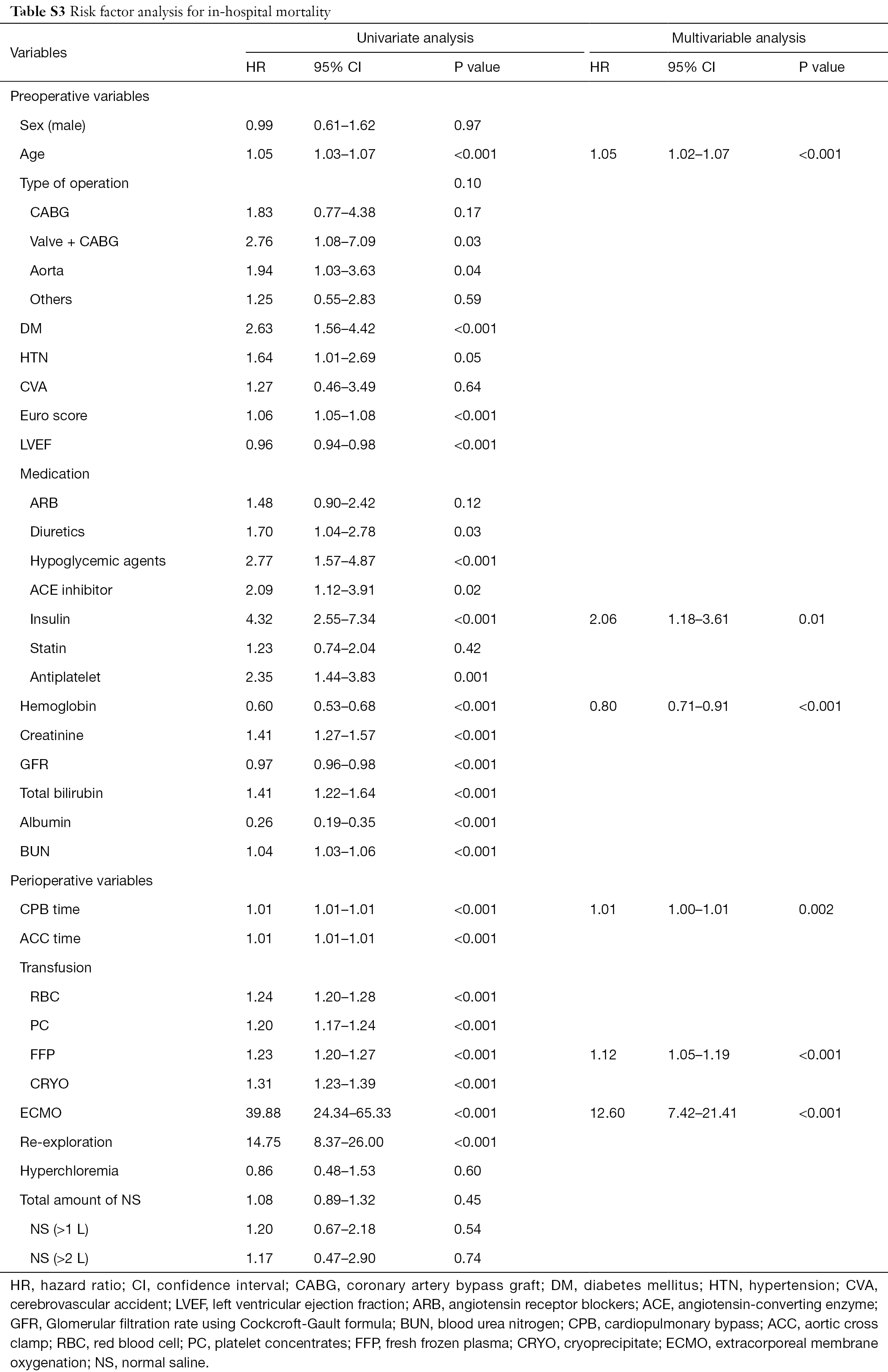 We compared the impact of high- and low-volume saline administration on kidney function after cardiac surgery using CPB, and found that high-volume administration was not significantly associated with an increased risk of postoperative AKI, need for RRT, or in-hospital mortality. These findings remained unchanged after adjustment for baseline characteristics and propensity score matching. Our finding is in line with that of a randomized controlled trial (17) that compared the effect of a buffered crystalloid solution and saline on AKI in critically ill patients, and demonstrated that the incidence of AKI and need for new RRT were similar for both solutions.

Some reports on postoperative fluid management strategy would seem to disagree with our results. A prospective pilot study (18) argued that a chloride-restricted strategy was associated with a significant decrease in the incidence of AKI as well as the need for RRT in critically ill patients. However, this trial was carried out on a relatively heterogeneous population, of which only 40–50% had cardiovascular disease or were in post-cardiac surgical settings. Another recent study showed that the use of balanced crystalloid solution for fluid resuscitation was associated with lower postoperative mortality and renal failure in patients undergoing abdominal surgery (19). Importantly, the patients in that study also differed from our patients, who had concurrent cardiac disease and possible kidney dysfunction. One retrospective observational study that focused on patients undergoing off-pump coronary artery bypass surgery demonstrated the efficacy of a perioperative renal protective fluid management strategy consisting of balanced solution instead of chloride-rich saline (13). However, the subjects included in that study may not be representative of all patients undergoing cardiac surgery with CPB.

The majority of valvular, coronary, and aortic surgeries are performed with CPB, which carries the risk of multiorgan and kidney injury. The pathophysiology of kidney injury associated with CPB has been attributed to cellular ischemia and consequent injury to tubular epithelium and vascular endothelium in the kidney (20-23). The mean arterial blood pressure during cardiac surgery is often at or below the lower limits of autoregulation. In addition, many patients undergoing cardiac surgery have impaired autoregulation due to preexisting comorbidities such as advanced age, atherosclerosis, or chronic hypertension; these patients may also be receiving drugs that impair kidney autoregulation (e.g., angiotensin receptor blockers) (20).

Postoperative administration of chloride-rich fluid has been examined in vulnerable patients, and some physicians preferred using buffered crystalloid solution to protect renal function. However, in our study, the high-volume saline group did not show significantly worse outcomes in terms of kidney function and survival than the low-volume saline group. Of course, as shown in Table 2, the 2 groups received similar amounts of balanced solution and colloid. The only difference was the total amount of saline. Therefore, patients in the high-volume saline group received more total fluid than the low-volume saline group. This implies that the beneficial effect of hydration with high-volume infusion of saline may outweigh the potential adverse effect of hyperchloremic metabolic acidosis that may result from saline infusion. A recently published randomized controlled trial on the effect of restricting chloride perioperatively also concluded that liberal chloride loading perioperatively was not associated with AKI or new RRT after cardiac surgery (24), which is concordant with our findings. The risk factor analysis in our study identified age, type of operation, CPB time, postoperative ECMO, and transfusion as risk factors, similar to the findings in a previous report (12). This suggests that liberal postoperative saline fluid management has limited effect on kidney function, while preoperative and operative CPB factors act as strong determinants of kidney injury in this subset of patients. The types of fluid administered after surgery do not seem to significantly affect the postoperative course. In addition, the mean duration of ICU stay after cardiac surgery was 2 days, which is a relatively short time, and hyperchloremia caused by high-volume saline administration over a short duration such as 2 days is unlikely to be associated with an increased risk of AKI and need for RRT.

There are several limitations to our study. First, this was a retrospective, observational study and not a randomized controlled trial. Comparison between the 2 groups may be biased by potential confounding factors, even though we performed propensity score matching and multivariable adjustment analysis to avoid potential bias. Second, the amount of saline administered in the high-volume saline group was 2.47 L on average, because colloids or blood products were also used to expand the intravascular volume if crystalloid alone was not effective for volume resuscitation. Thus, the total amount of saline may not be enough to affect kidney function in combination with other preoperative and intraoperative factors.

High-volume saline administration (>1 L) after cardiac surgery with CPB was not significantly associated with an increased risk of AKI, need for RRT, or in-hospital mortality. A further randomized controlled study on the liberal use of saline and its safety in patients undergoing cardiac surgery is necessary for a more decisive recommendation.

This study was supported by a grant from the Asan Institute for Life Sciences and Corporate Relations of Asan Medical Center, Seoul, Korea.

Ethical Statement: This study was approved and informed consent was waived by the Institutional Review Board (IRB) of our institution due to its retrospective nature (IRB number: 2016-0481).