The body fluid effusions include but are not restricted to pleural effusion, ascites, and pericardial effusion. They are one of the most common complications of benign and malignant diseases (1). The distinction of the benign from the malignant effusion depends primarily on cell morphology, and clinical treatment usually relies heavily on cytological diagnosis. The malignant effusion is mainly caused by metastatic carcinomas, while the benign effusions can be caused by reactive mesothelial cells, macrophages and sometimes inflammatory cells. Because the morphologies between the carcinoma and the reactive mesothelial cells are quite similar, cytological differentiation of effusions based on morphology alone can be challenging, especially when the number of cancer cells is rare or the atypia is minimal (2). It has been reported recently that conventional cytological differential diagnosis had a sensitivity of 69.2% and a specificity of 95.0% for the detection of malignant cells in serous effusion samples (3). Over years, various techniques have been developed and applied to increase the diagnostic sensitivity and the specificity for the effusion samples, such as immunocytochemistry (ICC), electron microscopy, flow cytometry, image morphometry, FISH, PCR, and HLA antigen (4).

The ICC markers have been used as a powerful complementary tool to assist the cytological diagnosis of the malignant effusions (5-7). The majority of these markers are used to identify carcinoma cells, including Moc-31 (epithelial specific antigen/Ep-CAM), Ber-Ep4 (epithelial cell adhesion molecule), thyroid transcription factor 1 (TTF-1) and other emerging markers. Intracellular hyaluronic acid and CD44 had been used for differentiation mesothelioma from adenocarcinoma (8). Recently, more research on a family of enzymes, acid phosphatases (ACPs) have emerged. The members of this family enzyme have different molecular sizes and specific substrates. At least six different ACPs had been reported and used as tumor markers in human tissues (9-11). The erythrocytic (ACP1) and the lysosomal (ACP2) were broadly expressed by many types of cells. While the prostatic (ACP3), the macrophagic (ACP5), ACP6 and the testicular (ACPT) forms were expressed by more limited type of cells. Goto et al. found that the serum ACP level was increased in giant cell tumor of bone (GCT, benign) and claimed that the ACP could be used as a tumor marker for GCT (12). Markovic et al. reported that the ACP was useful as a tumor marker for screening cervical intraepithelial lesions on Pap smears (13). ACP was also used as a diagnostic marker for adult-onset Pompe disease when typical vacuolated fibers were absent (14). Janckila et al. showed that tartrate-resistant ACP (TRACP) was an immunohistochemical marker for inflammatory macrophages, and found that circulating TRACP could be used as a biomarker for chronic inflammatory activity in certain chronic inflammatory diseases (15). The histological detection of an ACP was also exploited in the diagnose of hairy cell leukemia, Gaucher’s disease, and osteoclastoma (16). Prostatic ACP (ACP3) was expressed in prostate cancer bone metastases and promoted osteoblast differentiation (17). However, ACP has not been reported as a marker for identification of the reactive mesothelial cells.

The purpose of this study was to investigate the diagnostic values of the cocktail ACP staining in the body fluid effusions, especially in differentiation of the reactive mesothelial cells from other cancer cells. 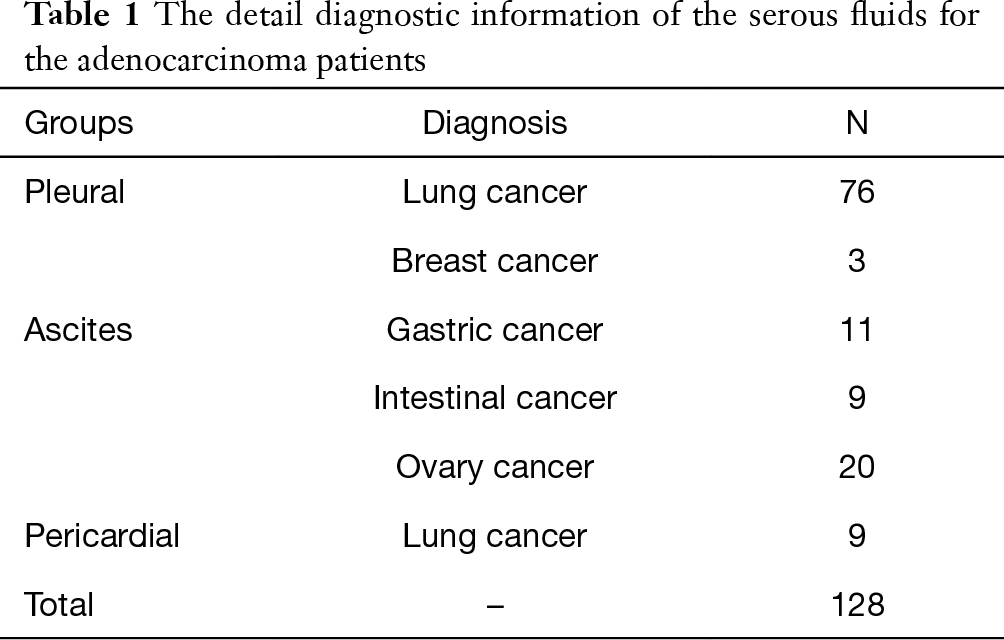 All effusion samples were freshly received, with a volume range of 20–2,000 mL. The samples were centrifuged for 10 minutes at 2,000 g. Each resulting pellet was used for the preparation of two cytological smear slides, one for the routine cytological examination (alcohol fixed Papanicolaou stained) and the other used for the ACP staining. The cocktail ACP reagents were ordered from JCK Biopharmaceuticals, Hefei, China. It contained 5 kinds of ACPs and the main component was ACP5. The brief procedure for the cocktail ACP staining was: after the smears were fixed in 10% formalin for 4 min and washed in the buffer for 2 min, the slides were then stained with the cocktail ACP staining reagent for 5 min strictly. After hematoxylin counter staining (JCK Biopharmaceuticals, Hefei) for 5 min and wash, the slides were mounted in a water-based Clear Mount mounting medium.

The sensitivity, the specificity, and the accuracy were calculated to evaluate the diagnostic performance of the ACP staining. A P value of <0.05 was considered significant. The statistical analysis was performed using SPSS16.0 software (SPSS Inc., Chicago, IL, USA).

The cocktail ACP expression of exfoliated cells in the serous effusions 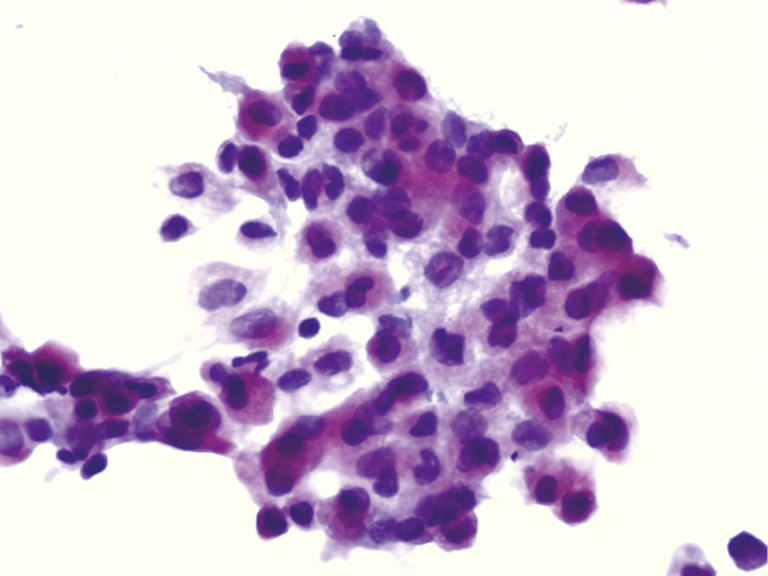 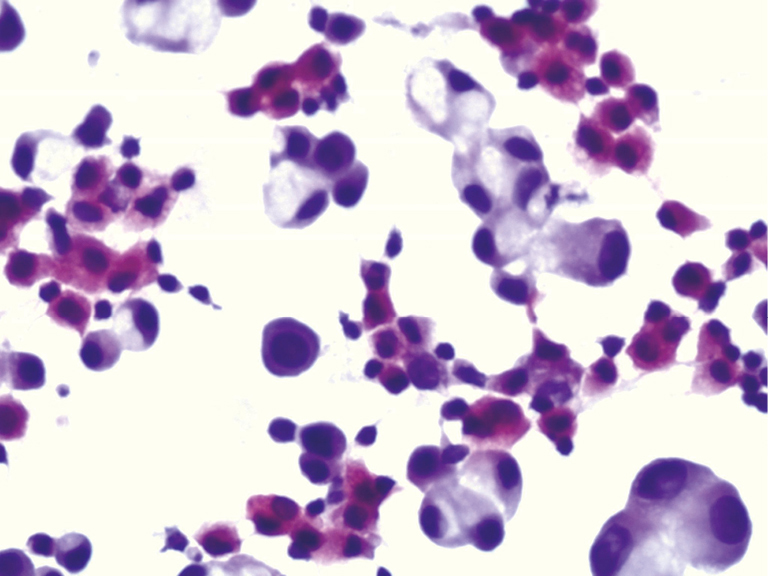 The expression results of the cocktail ACP in the pleural effusions, ascites, and the pericardial effusions

As shown in Table 2, in the benign serous effusions, which including the pleural effusions, ascites, and the pericardial effusions, the specificity of the cocktail ACP positive staining were 100% for the reactive mesothelial cells. While, in the malignant serous effusions, the sensitivity of the cocktail ACP negative staining for the cancer cells was 95.31%. Although the ACP negative rates in the malignant pleural, ascites, and the pericardial effusions were subtle different at 96.20%, 95.00%, and 88.89% respectively, there were no statistically significant difference among the three. 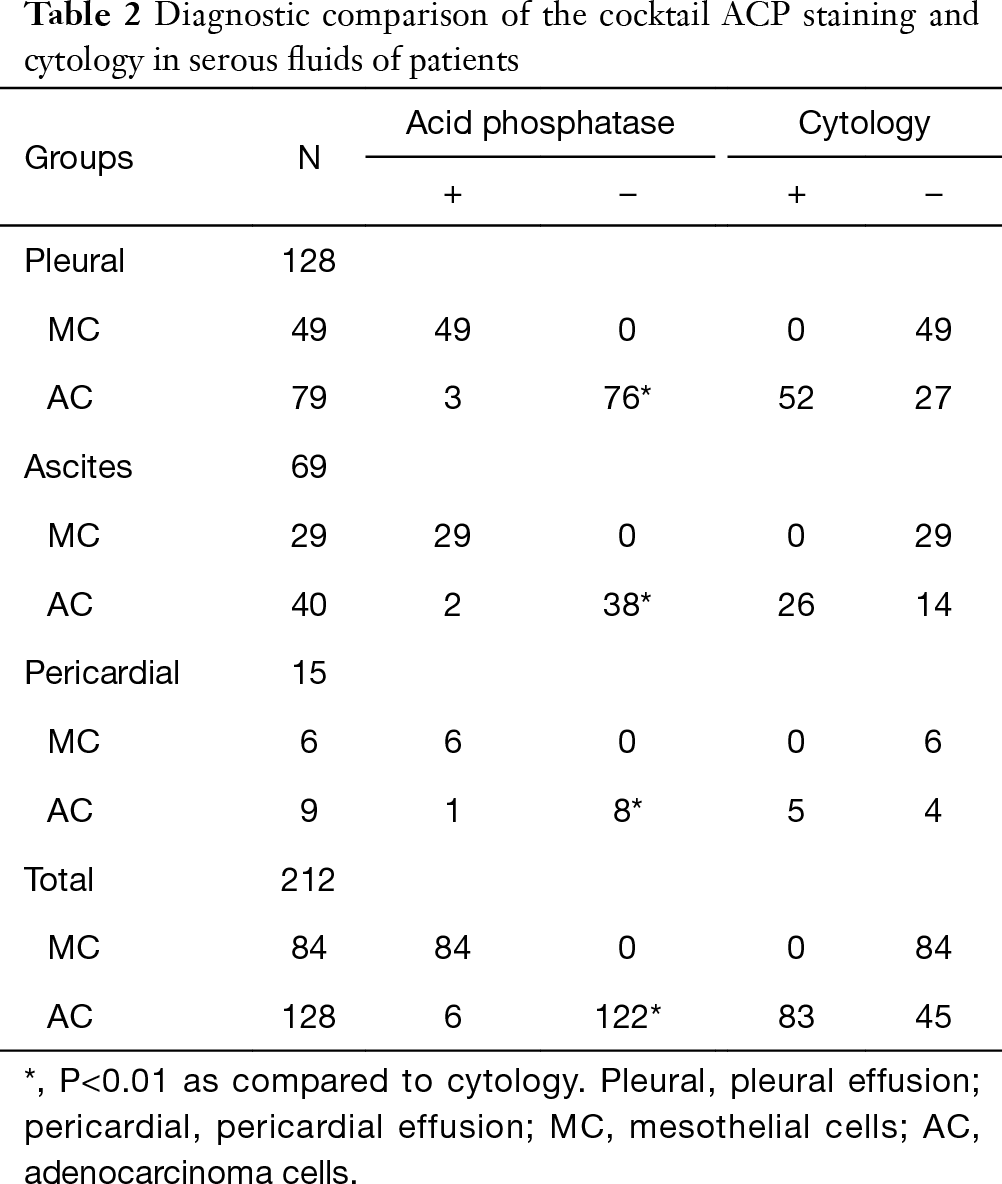 Table 3 summaries the sensitivity, the specificity and the accuracy of both the ACP testing and the cytological examination in the serous effusions which included the pleural effusions, ascites, and the pericardial effusions. The cocktail ACP positive staining in the mesothelial cells of the benign serous effusions was used for detecting the specificity, while the negative ACP staining in the cancer cell cytoplasm was assigned for calculating the sensitivity. The results showed that both the sensitivity and the accuracy were improved in the ACP staining compared with the cytological examination.

The historical data had shown that conventional cytological differential diagnosis using morphological criteria alone had a sensitivity of 69.2% and a specificity of 95.0% for detection of the malignant cells in the effusion samples (3). Thus, increasing the diagnostic rate which included both the specificity and the sensitivity of the malignant cells in the body fluid effusions will have an impactful effect for cancer therapy. To make the progress, the key step is to find a useful marker(s) to differentiate the cancer cells from the reactive mesothelial cells. Because the above two cell types are similar in morphology, thus cytological diagnosis of the body fluid effusion based on morphology alone is a diagnostic challenge. Especially when the number of the cancer cells is few or atypia is mild or minimal (2). False negative results are more common than false positive, and which results in the problematic effusions diagnoses (8,18).

Funding: This work was supported by grants from the National Natural Science Foundation of China to Guang-Ping Wu (grant No.81171650 and 81672082).

Ethical Statement: The study was approved by institutional ethics board of the First Affiliated Hospital of China Medical University (No. 2016-125). We have obtained internal board approval and/or patients informed consent for this study.